Has Donald Trump changed his tune since Charlottesville? Forget it — he hasn't changed since New York in the 1980s 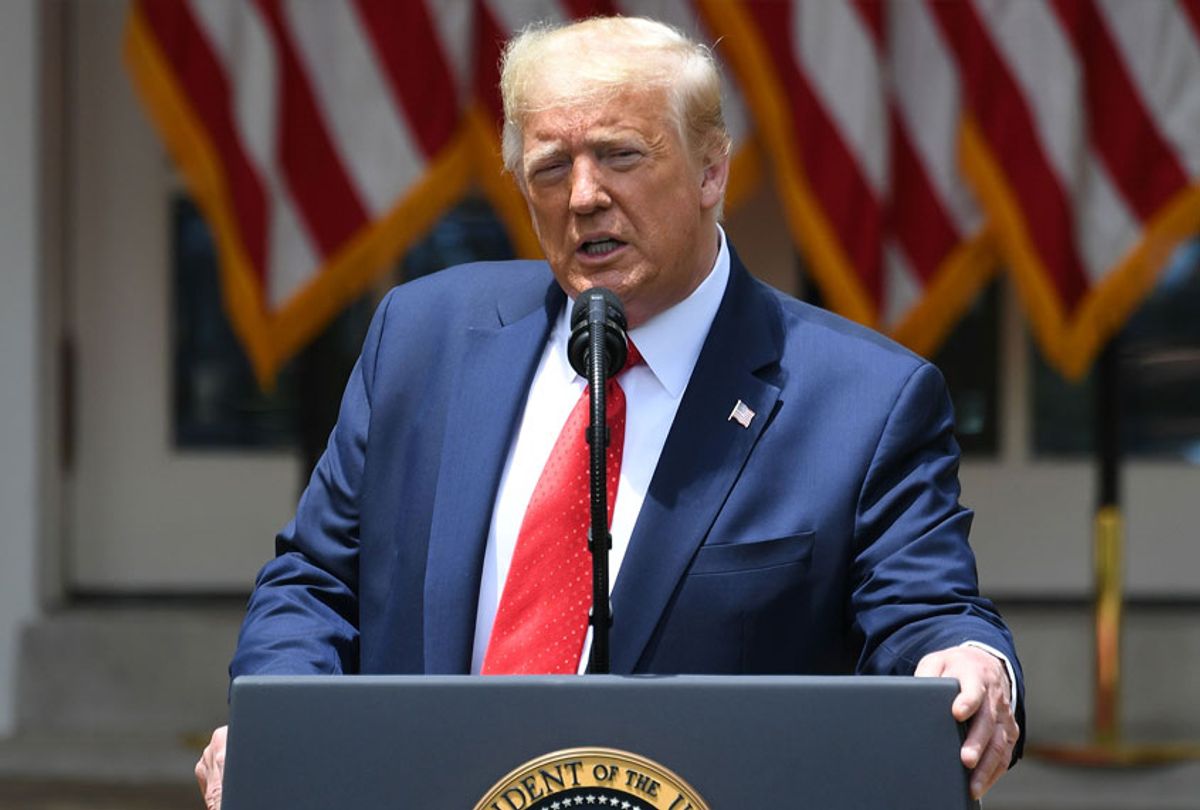 US President Donald Trump speaks at the event where he will sign an executive order on police reform, in the Rose Garden of the White House in Washington, DC, June 16, 2020. (SAUL LOEB/AFP via Getty Images)
--

Donald Trump can never, ever learn from his own mistakes — so we all have to keep reliving them over and over again. Right now Americans are in the midst of a necessary but gut-wrenching confrontation with the racism that permeates our culture and our justice system, and Trump is once again doing what he did three years ago this August, after the horrifying events in Charlottesville, Virginia.

Sure, the circumstances are slightly different. Instead of demonstrations in the street to protest neo-Nazis marching with tiki torches and chanting "Jews will not replace us" as they "defend" statues of Confederate generals, we have demonstrations in the street to protest the killing of unarmed Black men at the hands of police. But it doesn't take a very stable genius to see that these events are closely related.

Trump had only been president for a few months when Charlottesville erupted. The sight of those alt-right fascists chanting in the streets with their torches was a frightening spectacle. The street clashes that happened the following day were violent, and the gruesome murder of Heather Heyer by a white supremacist who drove his car through a crowded street was the most horrifying moment of all. Nobody knew what to expect from the new president faced with this sort of cultural upheaval for the first time, particularly since the neo-Nazi demonstrators included many visible Trump fans, including former Ku Klux Klan leader David Duke, were big Trump fans.

The president was on a "working vacation" at his New Jersey golf club — neither the first nor the last! — and didn't say a word for 48 hours. Finally, he came before the press for a photo-op to welcome some veterans and gave a perfunctory speech in which said, "I condemn in the strongest possible terms this egregious display of hatred, bigotry and violence on many sides, on many sides." (The emphasis was his.)

Trump went on to declare that the problem had been with us for a long time and called for law and order, bizarrely asserting, "No child should ever be afraid to go outside and play or be with their parents and have a good time." What that had to do with anything that had happened in Charlottesville was not clear. He complimented the police and the National Guard at great length.

That terrible speech did not go over well for obvious reasons so he gave prepared remarks the next day in which he bragged about the economy and claimed he had created a million new jobs as usual but then announced that he had met with FBI Director Chris Wray and then-Attorney General Jeff Sessions and they had decided to open a civil rights investigation into the events in Charlottesville. He said, "Racism is evil. And those who cause violence in its name are criminals and thugs, including the KKK, neo-Nazis, white supremacists and other hate groups that are repugnant to everything we hold dear as Americans."

It sounded like a speech a normal president might make in such circumstances. It was one of the best he ever gave. Unfortunately, two days later Trump met with the press and turned back into himself. It was at this appearance that he made his famous comment, "You had people that were very fine people, on both sides," and defended the Confederate statues: "I looked the night before — if you look, there were people protesting very quietly the taking down of the statue of Robert E. Lee."

That, of course, was the neo-Nazi demonstration which Trump seemed to think was populated with a lot of "very fine people" who just wanted to defend the confederacy. He said, "There are two sides to the country," leaving little doubt which side he was on.

There's been a lot of water under the Trump bridge since then but the events of the last couple of weeks have proved that he hasn't really changed since 1989, when he took out this infamous ad in all the New York newspapers:

We have seen Trump screeching about "domination" and "law and order" ever since the police murder of George Floyd in Minneapolis drove people into the streets two weeks ago. I don't have to relate here the horrific spectacle of the feckless photo-op and the gassing of peaceful protesters or the near-insurrection of the military over his threats to order active duty troops into the streets. His reaction to the uprising has been as tin-eared as it was after Charlottesville.

After days of criticism for his destructive comments, on Tuesday he met privately with some of the families of recent victims of police violence and held a press conference at which he signed an executive order to deal with police reform. It was ungracious and virtually free of substance, as usual. The executive order itself is thin gruel, essentially just encouraging police to promote better training and try not to use chokeholds — unless they really, really feel they need to. It creates a national database "concerning instances of excessive use of force related to law enforcement matters, accounting for applicable privacy and due process rights" that does not require police departments to actually participate.

In his speech Trump, said a few nice words about the families, bragged about the economy that doesn't exist anymore, spoke as though the pandemic was over (but if it isn't, a vaccine, a treatment or a cure is definitely right around the corner) and took cheap shots at Barack Obama and Joe Biden's criminal justice record:

All of that was lies. Trump has blindly reversed a whole package of reforms undertaken by the Obama administration in the wake of the Ferguson protests in 2014.

But the bulk of the president's time at the podium was spent extolling the virtues of the police, making it very clear once again that he believes there are "two sides to the country " and that he and the police are on one side, while those who see the need for the killing of unarmed Black men to stop are on the other.

After he signed the order, the photo of Trump surrounded by smiling leaders of police organizations as they received commemorative pens spoke volumes about the toughness of the supposed reforms.

Just in case his followers didn't get the message, the president's final words were a shrill dog whistle to the Confederate faithful: "We must build upon our heritage, not tear it down." MSNBC legal analyst Maya Wiley called it a "victory lap on the coffins of black people." Indeed it was. He might as well have led the group in the Rose Garden in a stirring rendition of "Dixie."