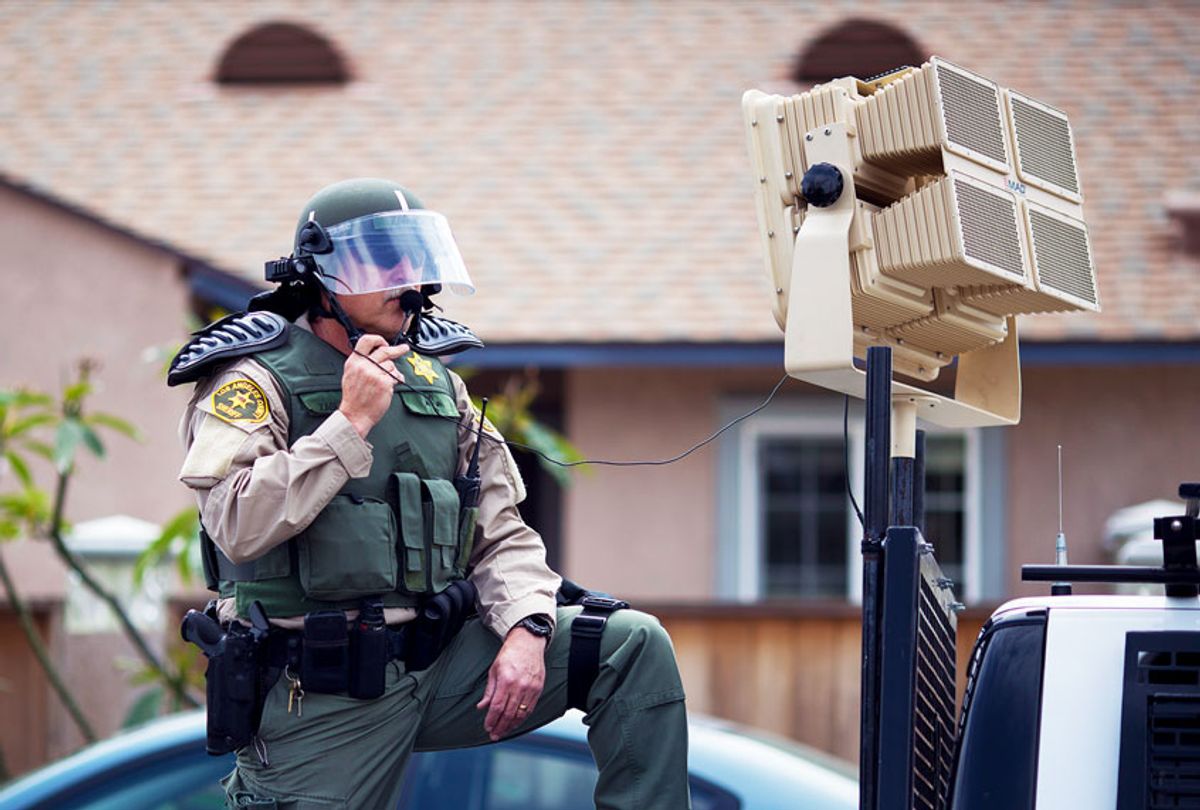 If you're planning on attending a protest, it would be wise to bring ear plugs. That's because many police departments are using LRADs, or long range acoustic devices, in order to control crowds — essentially a loudspeaker that can be repurposed and used by law enforcement as a weapon to permanently damage one's hearing.

LRADs can take on many looks, but generally resemble a box amplifier or loudspeaker. Although LRADs can be used to project human voices or recordings across long distances, they are also used to emit a so-called "deterrent tone" that is capable of resulting in permanent hearing loss or hearing damage. Such hearing damage occurs whenever human ears are exposed to any sound above 85 decibels (db), though it also depends on length of exposure. Certain LRADs are capable of creating sounds exponentially louder, up to 160 dB, which is louder than a jet taking off (that is between 120 and 140 db). The harm is exacerbated by the fact that, unlike whistles and other sound projection devices that send their waves in all directions, LRADs focus their sound into a cone that extends about 15 degrees in every direction from its axis.

The technology company Genasys Inc., which manufactures LRADs, admitted in a statement earlier this month that its devices have been used by "police departments in Portland OR, San Jose, CA, Colorado Springs, CO, Phoenix, AZ, Columbus, OH, Charleston, SC, Ft. Lauderdale, FL, and other cities." They statement claimed that the devices were used to "communicate unlawful assembly and other orders to crowds after recent protests turned violent." Genasys denies that LRADs are "weapons," though clearly they are being used (or misused) by police to that end.

The devices have been reportedly used on protesters in the United States in the past month. Several days ago, an LRAD was used to disperse protesters in Louisville, Ky. After Portland, Ore. police dispersed protesters with an LRAD on June 5, Portland's mayor banned the use of them.

Regardless of how LRADs are designed to be used, they have been used as a form of crowd control and used against nonviolent protesters, which has occasionally led to litigation. In 2009, protesters at the G20 summit in Pittsburgh were attacked with an LRAD by police. A local professor suffered permanent hearing damage, and won a settlement against the city of Pittsburgh.

Likewise, there is an ongoing lawsuit in New York City in which the plaintiffs claim that a LRAD used while they protested the death of Eric Garner resulted in "physical injuries, such as migraines, sinus pain, dizziness, facial pressure, ringing in ears, and sensitivity to noise." Previously, LRADs were also used on protesters in Ferguson, Missouri, in 2014.

LRADs were originally developed by the military after the bombing of the USS Cole off the coast of Yemen in 2000. A company called American Technology Corp. (ATC) created a "HyperSonic Sound directional loudspeaker system" that was similar to an LRAD; at the time, its main use appeared to be for advertising and entertainment.

ATC started working on military applications for the technology, which they then dubbed "High Intensity Directed Acoustics." The US Navy issued ATC a contract in 2002 to build a device with "non-lethal weapon potential," marking the first time the device would be formally dubbed an "LRAD." At the time, ATC described the LRAD as a "highly directive acoustic array designed for long-range communication and unmistakable warning," explaining that "the LRAD device can issue a verbal warning and has the capability of following up with a deterrent tone to influence behavior or determine intent."

Since then, they have become so ubiquitous in their use for crowd control that scholars are trying to find ways to offset their impact. (Currently, we know that cheap foam ear plugs can reduce their sound by up to 30 dB.) The American Association of Audiologists have taken the public position that LRADs should be banned for use as crowd control for health reasons.

Should you be on the receiving end of an LRAD, the best thing to do is to move to either side so you can get out of the range of its cone of noise as quickly as possible. If you do not do so, you run the risk of experiencing short-term migraines, dizziness and hearing loss, as well as a long-term side effect of becoming excessively sensitive to lesser noises. According to Ian McLoughlin, a professor of computing at the University of Kent, "When on high power, the effects are like a 'punch in the guts,' ranging from nausea to involuntary evacuation of the bowels."

Genasys told the media outlet Digital Trends that an LRAD device broadcasts sound in a 30-degree beam and added that "LRAD systems are voice communication systems, not weapons. Training for the systems is contrary to such use." He also argued that "the maximum voice output of the 100X [a particular LRAD model commonly used by police] is 131 decibels (dB) at just one meter from the system."

Speaking to Salon earlier this month, Michael German — a senior fellow at the Brennan Center for Justice and a former FBI agent — explained, "I think the evidence is pretty clear that [militarization of police] increases the hostility and violence that we see in protests because it serves its intended function of being very intimidating and hostile, and it also dehumanizes in a way that allows them to feel less individually responsible for a particular act."