Titled "Goalposts," the new ad highlights Graham's attempts to stay ahead of a grim reality 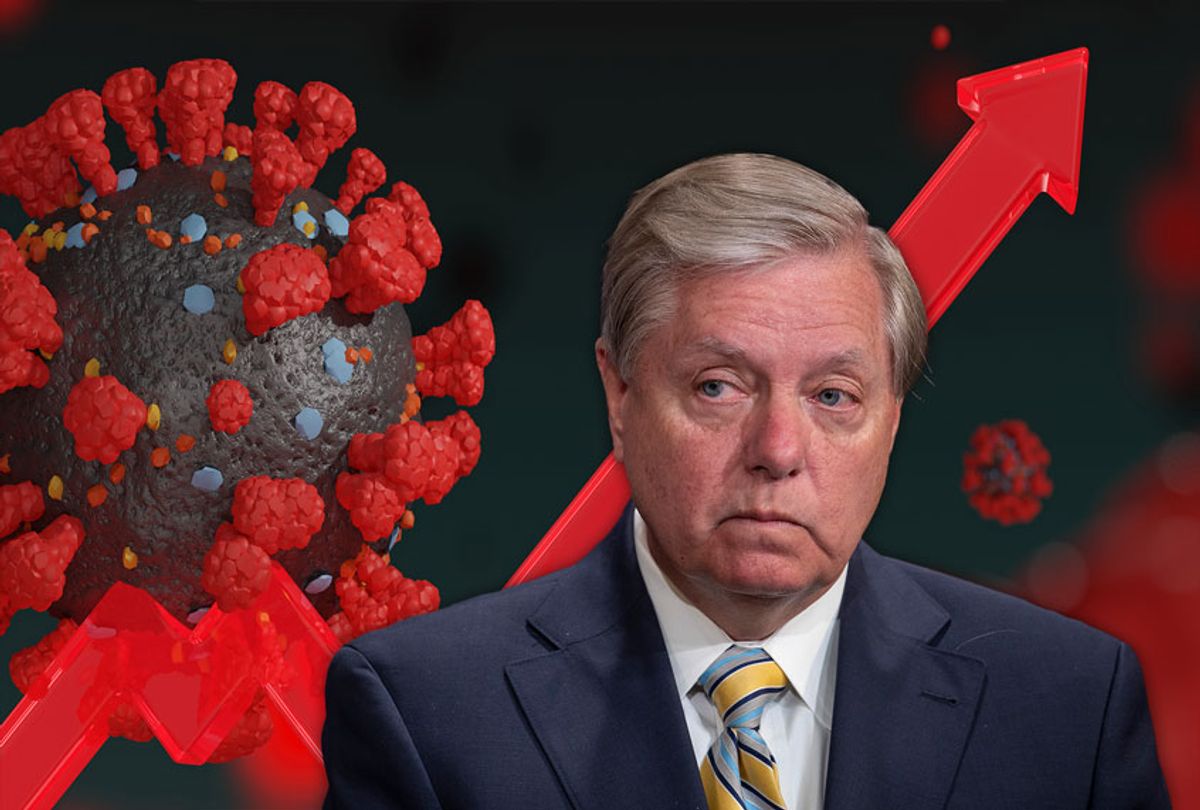 Jaime Harrison, the South Carolina Democrat vying to unseat Sen. Lindsey Graham this fall, on Thursday released a somber ad laying out a compact timeline of Graham's defense of the White House's botched response to the coronavirus pandemic. The Republican senator has consistently raised the number of deaths he would find acceptable as he defends his frequent golf partner, President Donald Trump.

Salon obtained an exclusive preview of the 35-second spot, which is titled "Goalposts" and will run on digital platforms starting Thursday. The ad syncs Graham's increasingly high thresholds for measuring the president's success with a rolling COVID-19 death toll counter, highlighting the three-term incumbent's efforts to stay ahead of a grim reality that has consistently surged past his projections — including at home.

"South Carolina is hitting a new daily case record almost every single day, and we are home to one of the highest growth rates in the country," Harrison told Salon. "But Lindsey's television interviews are not about protecting South Carolinians or making sure small businesses and families can get by during this time of economic upheaval. Instead, he is using his position to play political games and push for the cutting of unemployment relief, even while this state is becoming an epicentre of the virus.

"We need leadership who will speak truth to power — no matter who sits in the Oval Office," campaign spokesman Guy King added. "This moving of the goalposts is little more than blatant political maneuvering and proves again that Senator Graham cares far more about defending those in power than helping the families of South Carolina. This cavalier posture is especially troubling from a senator representing a state near last place in coronavirus testing."

Graham, who chairs the powerful Senate Judiciary Committee, might now find himself facing another grim reality. He appears locked in a locked in a dead heat with the upstart Harrison, a Yale and Georgetown Law graduate who rose to become the first Black chairman of the state's Democratic Party. Graham's unctuous praise of President Donald Trump throughout the president's term, and specifically the pandemic, may be to blame.

Graham — who self-quarantined in March after he was exposed to the virus during a visit to Trump's Florida club, Mar-a-Lago — has over the last three months consistently downplayed the pandemic in defense of Trump's  botched response, and the new ad seizes on that striking series of resets.

Then, pulling from a May 14 Politico article — the same month that deaths pass 100,000: "To quote Senator Lindsey Graham, 'The closer you can have it to 120,000 deaths, I think you can say you limited the casualties in this war.'"

The ad concludes with the June 30 testimony from the country's top infectious disease expert, Dr. Anthony Fauci, who told Congress: "I would not be surprised if we go up to 100,000 [cases] a day if this does not turn around, so I am very concerned."

Though the upstart Harrison outraised Graham during the first three months of 2020 — $7.3 million to Graham's $5.6 million — the incumbent senator still commands a $13 million war chest, the largest in South Carolina history, as well as a household name.

At the same time, at least two dozen key Graham donors — including a key industry executive — have in recent months defected to Harrison, and an FEC analysis shows that more than 80% of Graham's $13 million reserves have come from out-of-state.

A deeper dive into that most recent poll reveals possibly more trouble. Fifty-six percent of South Carolina voters said they held an unfavorable view of Graham, while only 35% took a positive view of the senator.

Editor's note: Salon — with no advanced knowledge of the Harrison campaign's ad — published an article Thursday morning laying out a similar pattern in more detail.