The real threat to liberty today is not King George, but the robber-barons and corporations destroying Earth 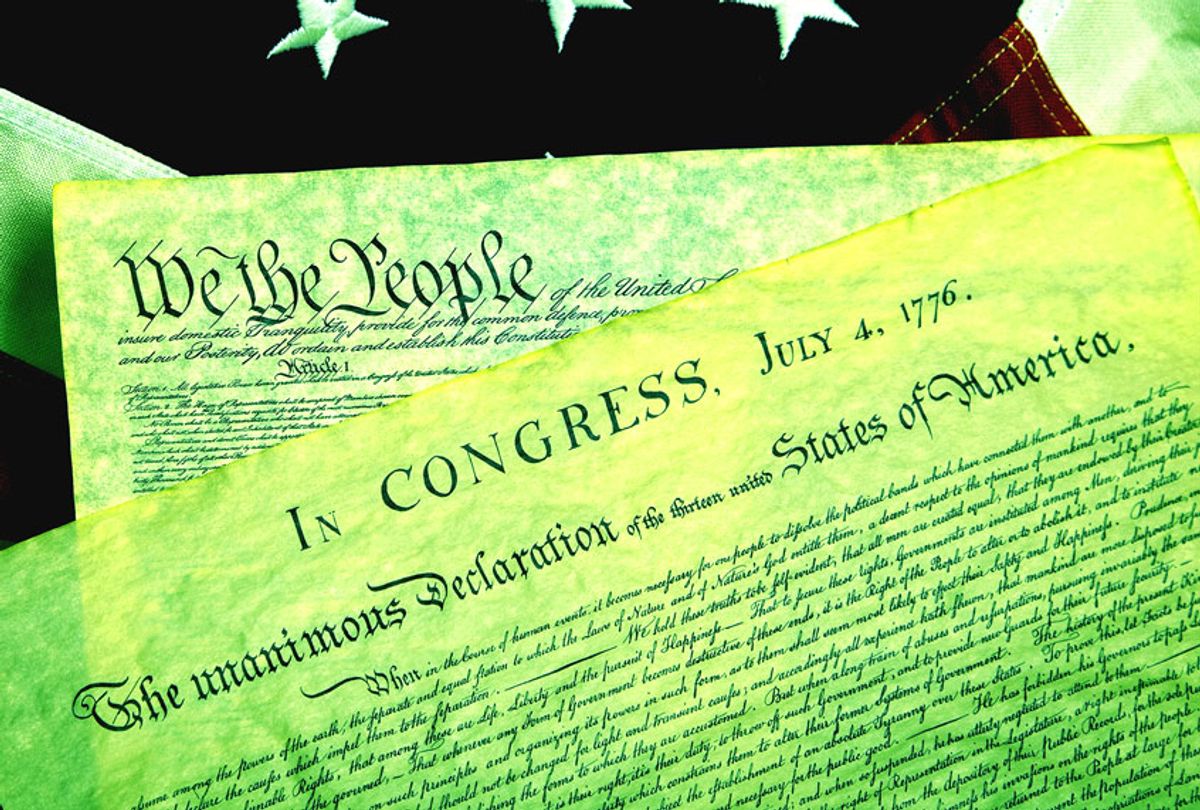 The Declaration of Independence, but green (Getty Images/Salon)
--

The document that we celebrate on Independence Day, the Declaration of Independence, was supposed to be a statement of liberation — from the political and economic power structures of Great Britain, whose management of the American colony had failed us. There's something similar happening today, though the oppressing power is not a nation-state. Rather, the modern-day impediments to our liberation and freedom come from corporations, billionaires, media conglomerates, big banks and the like.

As we celebrate Independence Day, we must recognize that it is time for a new Declaration of Independence — a Green Declaration of Independence, to be precise, one that liberates the people of the world from economic and political power structures that have failed us by allowing global warming, the pandemic and other existential threats to humanity, as well as by supporting or abetting grave social and economic injustices. In the process these forces threaten our liberty, dignity, quality of life and very survival as a species.

The 4th of July celebrates the original American Declaration of Independence, a document signed in 1776 by 13 British colonies in North America to inform King George III that they were breaking free from his empire. While insurrections were hardly new under the sun by the late 18th century, the Declaration of Independence was unique because the colonists insisted that people had the right to choose their own governments and, in the process, control their own destiny. As the Preamble put it:

We hold these truths to be self-evident, that all men are created equal, that they are endowed by their Creator with certain unalienable Rights, that among these are Life, Liberty and the pursuit of Happiness.

They added that "to secure these rights, Governments are instituted among Men, deriving their just powers from the consent of the governed."

Much has been written about why the delegates at the Second Continental Congress signed this revolutionary document. In "The Ideological Origins of the American Revolution," historian Bernard Bailyn argues that the colonists sincerely thought British laws like the Stamp Acts and the Coercive Acts were part of a conspiracy designed to eliminate freedom and ultimately enslave them. They also believed that they had a divine destiny to create an empire based on the principles of freedom (at least as they were understood at the time). In contrast, historian Howard Zinn argues in "A People's History of the United States" that the founding fathers were motivated by their selfish economic interests as members of the upper class, and used populist language to unite the lower classes behind them in their personal cause against the empire.

There is merit to both of these arguments. The Declaration of Independence laid out some of the most important ideals ever articulated about human rights and political legitimacy. But it conveniently ignored larger questions of equality. Still, it is indisputable that today there is a threat today analogous to what the colonists saw in King George III — not a person, but more menacing.

"King George III was a social institution," Dr. Richard D. Wolff, professor emeritus of economics at the University of Massachusetts Amherst, told Salon. "Kingdoms were produced out of the feudal period in Europe, in England and everywhere else. It's a human institution. It is born out of human struggles. It evolves over time, and then it dies."

He added, "When social forces are gathered, in enough different qualities and at a sufficient quantity, they basically force social change. That's why feudalism is gone. Slavery is gone." Capitalism, by contrast, is the institution that exists in America today which causes hardships that are being resisted by a growing resistance movement.

"When you see this cataclysmic crash of capitalism — this depression that we're now in, and you add the climate threats that are coming down the road in a precious few years, and then you add the, the viral pandemic — you are beginning to experience the concentration of different kinds of crises, and when too many of them happen at the same time, that's when the system dissolves," Wolff told Salon.

Wolff's list of evils does not overstate the matter. For one thing, the most imminent threat to our survival as a species — man-made climate change — is the direct result of our political leaders failing to listen to the scientific consensus about global warming threatening humanity's future on this planet. They are motivated to do so for reasons ranging from concerns about the business community to general shortsightedness and distrust of experts, bringing to mind the governmental failures chronicled in another 4th of July text, the classic 1975 thriller about a killer shark attacking a small New England town, "Jaws."

"Using the 'Jaws' analogy, we've got to be the Richard Dreyfuss character [a marine biologist] working with the Roy Scheider character [a police chief]," Michael E. Mann, a distinguished professor of atmospheric science at Penn State University, told Salon. "We need to be informed by what science is telling us. We need people who are brave and are willing to do the right thing, and that's what the Dreyfuss and Scheider characters were. I like this analogy. It's science working hand-in-hand with policymakers in good faith to address this existential crisis."

The forces that threaten this, as Mann has explained to Salon in previous interviews, are businesses that have a financial incentive to continue exploiting the planet's finite resources regardless of the long-term consequences. They are aided by media moguls like Fox Corporation Chairman Rupert Murdoch, tech executives who are permissive toward misinformation like Facebook CEO Mark Zuckerberg and politically active business leaders like the Koch family.

The solution, Mann argued, is to only vote for politicians who are unequivocal in their willingness to declare our independence from the moneyed interests that destroy the planet — without exception. This in particular involves Americans declaring their independence from the fossil fuel lobbies, a point echoed by billionaire, environmental activist and former 2020 presidential candidate Tom Steyer.

"We need to be independent of the political power of the fossil fuel lobby," Steyer told Salon. In addition to how the fossil fuel lobby has endangered the planet, harmed human health and pushed for policies that limit potential job growth, he connected the issue to that of the military-industrial complex, pointing out that "we've had a series of conflicts in the Middle East. We've had enormous amounts of time and attention spent there. We had a naval fleet that keeps open the different straits around the world so oil can flow back and forth. Oil and gas have been the lifeblood of the world economy. And they've had a central position in shaping our foreign policy."

A Green Declaration of Independence needs to go beyond the issue of global warming. Just as President Donald Trump is acting like the mayor from "Jaws" by failing to save his people from global warming, so too did he ignore the figurative ominous dorsal fin of the coronavirus pandemic. Thousands upon thousands of deaths, as well as the worst economic collapse in nearly a century, can be placed squarely at his feet because he refused to listen to scientists — and, on top of that, because our free market capitalism system was unable to protect the working class when the economy needed to be shut down in order to save lives. Capitalism requires constant consumption in order to sustain prosperity, and the pandemic revealed the flaw in that model when it disrupted the cycle of growth. Similarly free market capitalists eschew the idea of creating generous social safety nets for those in need, leaving millions of Americans to free fall when the bottom fell out of the economy.

"Going with the structural metaphor concept, there always [are] huge cracks underneath the facades of capitalism, and the huge weight of this pandemic has widened those cracks," Norman Solomon, co-founder and national coordinator of RootsAction.org and a Sanders delegate to the 2016 Democratic National Convention, told Salon earlier this month about capitalism and the pandemic. "For the most part, the people who are the most vulnerable anyway to corporate capitalism, they're suffering the most, they're dying the most."

These are not the only issues that have brought the need for a Green Declaration of Independence to the fore. In addition to existential threats like global warming and the pandemic, people throughout the world are becoming rapidly more aware of systemic injustices directly caused by prevailing political and economic power structures. We have a military-industrial complex that wages constant wars, weapons of mass destruction that could mark the death of our species and pollution that could wipe us off the planet by lowering our sperm count. We have a racist prison-industrial complex that deprives millions of people of their most basic freedoms and severe income inequality that leads to rampant economic suffering and the deprivation of opportunities for social mobility for millions of people.

In short, we are a society in which "Life, Liberty and the pursuit of Happiness" either do not exist or are seriously threatened for, literally, everyone. As a result, we need to be liberated from the forces that are causing this — and far more urgently than the colonists needed to be freed from King George III more than two centuries ago.

But can an understanding of those forces be limited to the fossil fuel lobby and various other individual bad actors?

Wolff clarified that "when I say private capitalist enterprises, that is an aggregate term." He explained that "if a typical corporation has say 5,000 employees in total, the 5,000 do not make the decisions about what are important in terms of climate change or preparation for pandemics or anything else. They don't all participate. The vast majority in every capitalist enterprise are excluded from all the key decisions — namely what to produce, how to produce, where to produce and what to do with the net revenue or profits that the enterprise hopes to generate the decisions on the disposition of those profits."

As Wolff explained, "a tiny unaccountable minority of the people" in control of these powerful businesses make the crucial decisions that impact our planet's habitability, people's wages and other social justice issues. They "don't count in the calculations of profitability ecological byproducts like polluted water, polluted air, all the rest of them. Capitalism rewards, a board of directors that makes profit for a company."

If we want to truly celebrate the 4th of July, we need to do more than simply honor past triumphs in the name of freedom. We must realize that, in our own era, there are even graver threats to freedom that must be addressed — and that, if we fail to address them, the more fitting 4th of July text will be a movie about political stupidity ignoring physical danger, rather than a document that celebrates triumph over adversity.

Assuming, of course, that we still have future human generations able to celebrate any holiday at all.