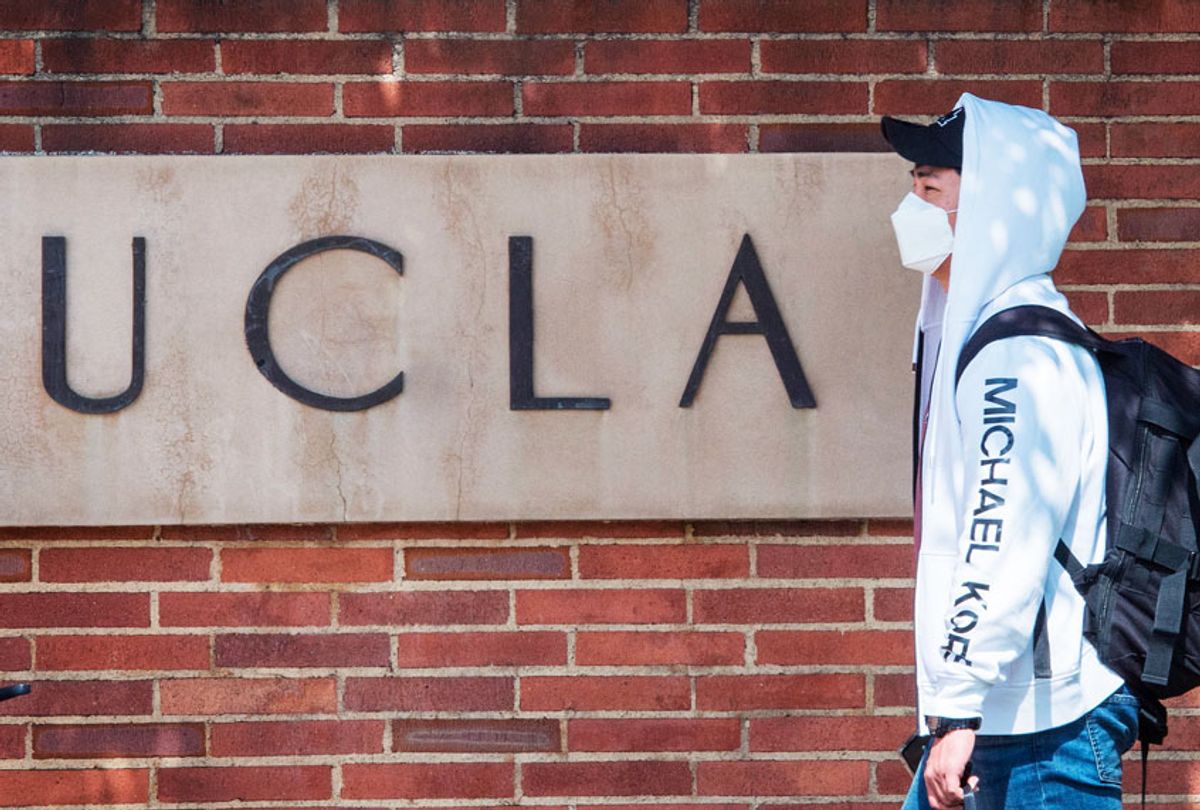 A student wears a face mask to protect against the COVID-19 (Coronavirus) as he leaves the campus of the UCLA college in Westwood, California (MARK RALSTON/AFP via Getty Images)
--

College students within California's premier research university system are wondering if their privacy is safe after learning that the University of California (UC) made a commitment to invest $200 million in an investment firm that has access to vast troves of student data through a subsidiary.

The private equity investment firm, Thoma Bravo, announcing that it was purchasing the educational software firm Instructure Inc. in December in an all-cash deal for roughly $2 billion, an acquisition that was completed in March. Instructure Inc. owns Canvas, a popular virtual classroom platform. Given the platform's popularity within higher education institutions, Instructure has data on grades, lectures, tests, papers and more from tens of thousands of students.

Within a few weeks of the news announcement of Thoma Bravo's acquisition, more than 50 people who work at colleges signed a public letter urging Thoma Bravo to issue a legally-binding statement promising that it would not abuse its newfound access to student data. Their primary concern was how the data acquired through Instructure's learning management software Canvas would be used by the company.

"We request Instructure make clear statements be made as to how they intend to legally and ethically protect current student data, future student data, and access to both under the new ownership," the letter explained. "While the Chief Legal Officer Matt Kaminer has expressed Instructure's commitment to, and taken major steps towards ensuring ethical handling of student data, there are no guarantees that prevent the private equity firm from using student data in ways we didn't intend."

Instructure has made it clear through their own language that they view the student data they aggregated as one of their chief assets, although they have also insisted that they do not use that data improperly.

Yet an article published in the Virginia Journal of Law and Technology, titled "Transparency and the Marketplace for Student Data," pointed out that there is "an overall lack of transparency in the student information commercial marketplace and an absence of law to protect student information." As such, some students at the University of California are concerned that — despite reassurances to the contrary — their institution's new financial relationship with Thoma Bravo will mean their personal data can be sold or otherwise misused.

"It appears that the UC may be invested — however indirectly — in the monetization of data collected from their own students," Mustafa Hussain, a PhD candidate in Informatics at the University of California, Irvine, told Salon in a statement. He also said that he was unclear as to whether the college is "aware of Thoma Bravo's acquisition of Instructure, whether they have seen it as cause for concern, how they have responded, and whether they are invested in the student data market in other ways. There's a lack of transparency here, from the UC, Thoma Bravo, and Instructure, and I feel it's cause for concern."

Hussain's views were echoed in a statement by graduate student workers Samiha Khalil and Jack Davies.

"As graduate student workers responsible for delivering 50% of all instructional hours in the University of California, we are very concerned by the persistent request that we use Canvas for our online instruction and to record our lectures," Khalil and Davies explained.

After describing how the University of California failed to communicate their rights as students and teaching assistants and how the need for virtual learning has increased during the coronavirus pandemic, they added several other accusations. They claimed that "the UC weaponized Canvas to facilitate its repression of grad workers at UCSC [University of California, Santa Cruz] fighting for a cost of living adjustment, installing a tattle-bot to have undergraduates snitch on striking workers. The UC also hired IT experts to retrieve data on grade deletion from Canvas in order to punish strikers through the student code of conduct, since deleting grades is not a violation of our contract as workers."

They concluded, "As the EdTech [educational technology] industry expands with the demand for online instruction, workers need to organize to resist universities, like the UC, as they seek to take advantage of this crisis to deepen worker exploitation and surveillance."

The students' concerns over surveillance and privacy are not unwarranted. Previously, the University of California used military surveillance technology to help quell the grad student strikes at UC Santa Cruz and other campuses, as Salon previously reported.

Private equity firms like Thoma Bravo are an innately controversial type of investment fund, which some thinkers like Robert Reich contend should be heavily regulated. Private equity firms generally purchase and restructure companies (often by laying off workers) in order to milk them for funds, often gutting them in the process and selling off their stripped assets later if or when they go bankrupt. Private equity firms are also infamous for inflating fees and expenses charged to companies in which they hold stakes. This means that private equities can ravage pension plans that have been invested in them or reap billions from investors through their fee arrangements. Because of the lack of oversight of private equity, the FBI has expressed concern that such firms could easily be used to launder money.

This type of investment fund has made the news in various unflattering ways. When Mitt Romney was the Republican presidential nominee in 2012, his work at the private investment firm Bain Capital came under scrutiny, specifically Romney's practice of charging companies millions in fees before loading them up with debt. Because the companies in Bain's portfolio were often advised to fire large numbers of workers to pay off those debts, Romney effectively created situations where their businesses needed to fire workers specifically because of the debt that he created for them. This method is known as a "leveraged buyout": Private equities find businesses with good cash flows that are experiencing problems, take over the company (either voluntarily or through a "hostile" method) with a small amount of its own money and the rest covered by bank loans and then charge large management fees for advice on who to fire in order to pay off the loans. The majority of leveraged buyouts are backed between 60 to 90 percent with loaned money.

Last year Sen. Elizabeth Warren, D-Mass., proposed legislation that would prohibit private equities from stripping the companies they take over of cash, real estate and other assets, as well as hold them for responsible for the debts they acquire in order to purchase them. Companies like Toys R Us, Friendly's and HCR ManorCare all went bankrupt because of private equities.

"For far too long, Washington has looked the other way while private equity firms take over companies, load them with debt, strip them of their wealth, and walk away scot-free — leaving workers, consumers, and whole communities to pick up the pieces," Warren said in a statement at the time.