Everything we suspected about Donald Trump has come true

Donald Trump is a fascist. He comes right out and says it. Even his friends admit it. He's also a whiny loser 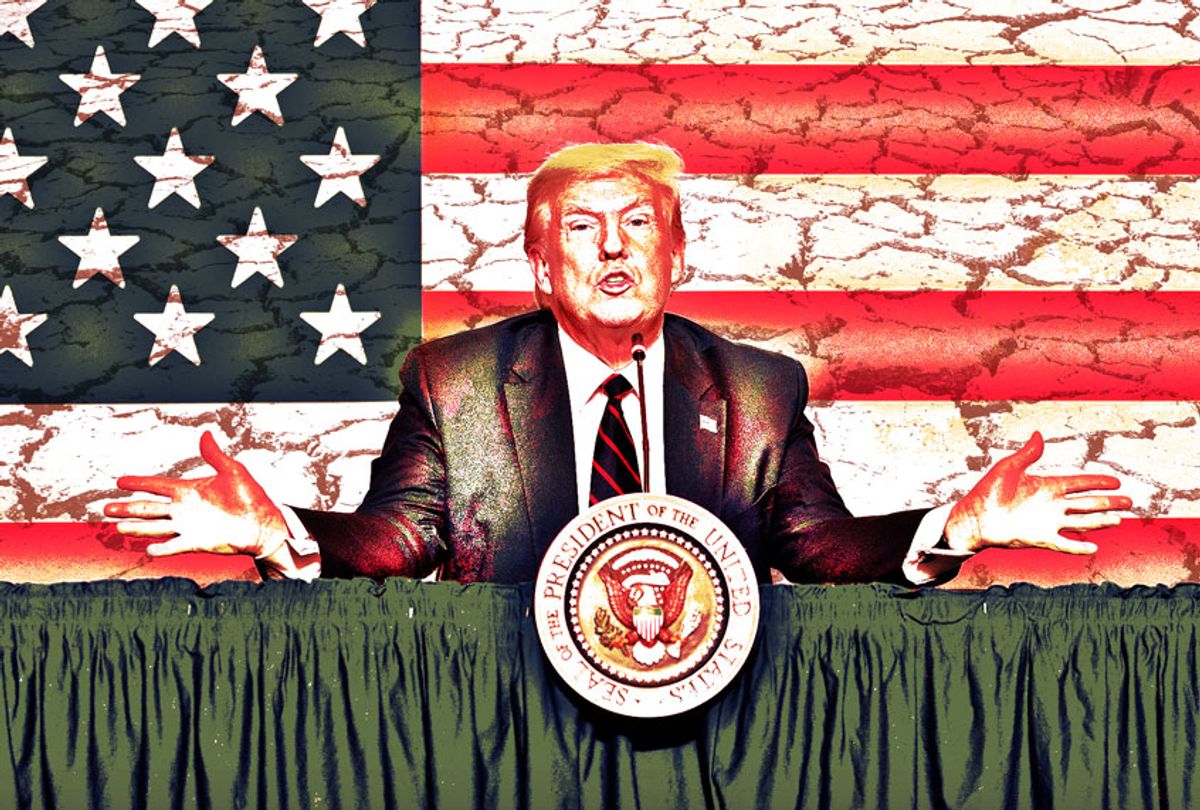 There were 65,853,514 of us who voted for Hillary Clinton in 2016, and it didn't take long to prove how right we were. Donald Trump waited less than 24 hours after he was inaugurated as the 45th president of the United States before he dispatched his press secretary, Sean Spicer, to the White House briefing room — attired in a tent-like garment reminiscent of David Byrne's "Big Suit" in the Talking Heads documentary, "Stop Making Sense" — to lie about the size of the crowd at his inauguration. Trump's inaugural ceremony and parade had "the largest audience to ever witness an inauguration, period, both in person and around the globe," Spicer told the White House press corps, which was already showing photographs of the sparse crowd on the National Mall and Trump waving to entire blocks of unoccupied bleachers along the inaugural parade route. Spicer's lie about Trump's crowd size was so blatant, it was shocking.

And the shocks kept coming.

By the time Trump got around on Thursday to his proposal to postpone the November election, the only proper reaction was to say, We told you so. We saw this coming.

It's too late for people like Steven G. Calabresi, co-founder of the arch-conservative Federalist Society, who wrote an op-ed in the New York Times on Thursday calling Trump's proposal "fascistic and … grounds for the president's immediate impeachment again by the House of Representatives and his removal from office by the Senate."

Trump was a fascist when he ordered his attorney general, William Barr, to drop the charges against his first national security adviser, Michael Flynn, for lying about his collusion with the Russian ambassador to lift sanctions against Russia. Hell, Trump was a fascist back in 2017 when he fired FBI Director James Comey for refusing to "go easy" in his investigation of Flynn and the rest of Trump's campaign for colluding with Russians in the 2016 election. He was a fascist when he commuted the sentence of his longtime pal and political fixer Roger Stone, who had been convicted of obstruction of justice and lying to the Congress.

Trump was a fascist way back in 1989 when he advocated bringing back the death penalty in New York after the young men known as the "Central Park Five" were wrongfully convicted of gang-raping a jogger. He was still a fascist last year when he refused to apologize for his harsh comments about the innocent men. "You have people on both sides of that," Trump told reporters at the White House in June of 2019, again deploying "both sides" in refusing to back down from yet another fascistic position he had taken. He was a fascist every time he called journalists "the enemy of the people" at his rallies.

See, that's the thing about Donald Trump. He's a fascist, and he comes right out and admits it. He did it again on Thursday when he suggested at a White House press conference that the only votes that should count are those tallied on Election Day, thus invalidating mail-in ballots, which can take days to count after elections. "So many years, I've been watching elections. And they say the 'projected winner' or the 'winner of the election' — I don't want to see that take place in a week after Nov. 3 or a month or, frankly, with litigation and everything else that can happen, years. Years. Or you never even know who won the election."

Trump is beginning to react in real time to an inexorable shift that has taken hold among the electorate. He can't budge his waning in the polls no matter what he does. Fox News has lost its ability to rescue his political standing, even among his own base. He's been in a political slide for two months, and nothing he does to catch up is working.

There were reports on Thursday that the Trump campaign has pulled its TV advertising from the key swing state of Michigan. By Friday, his campaign admitted that it had hit "pause" in its national advertising strategy. Almost no Trump ads have been scheduled to run in August, the month the Republican National Convention is scheduled to take place. And plans for September are on hold as well.

Trump began to hold daily coronavirus briefings again last week and his poll numbers haven't budged. People aren't reacting to his bluster and lies. They haven't been moved by Trump calling Portland protesters "anarchists" and "agitators" who "hate our country." Nothing Trump says about the coronavirus matters. What matters is what's happening out there in the country, where red states are experiencing steep spikes in cases and deaths from the virus.

People want to know when they're going to get their lives back, and Donald Trump doesn't have an answer for them.

Trump is losing it because he is losing. He doesn't know anything else. It's who he is.