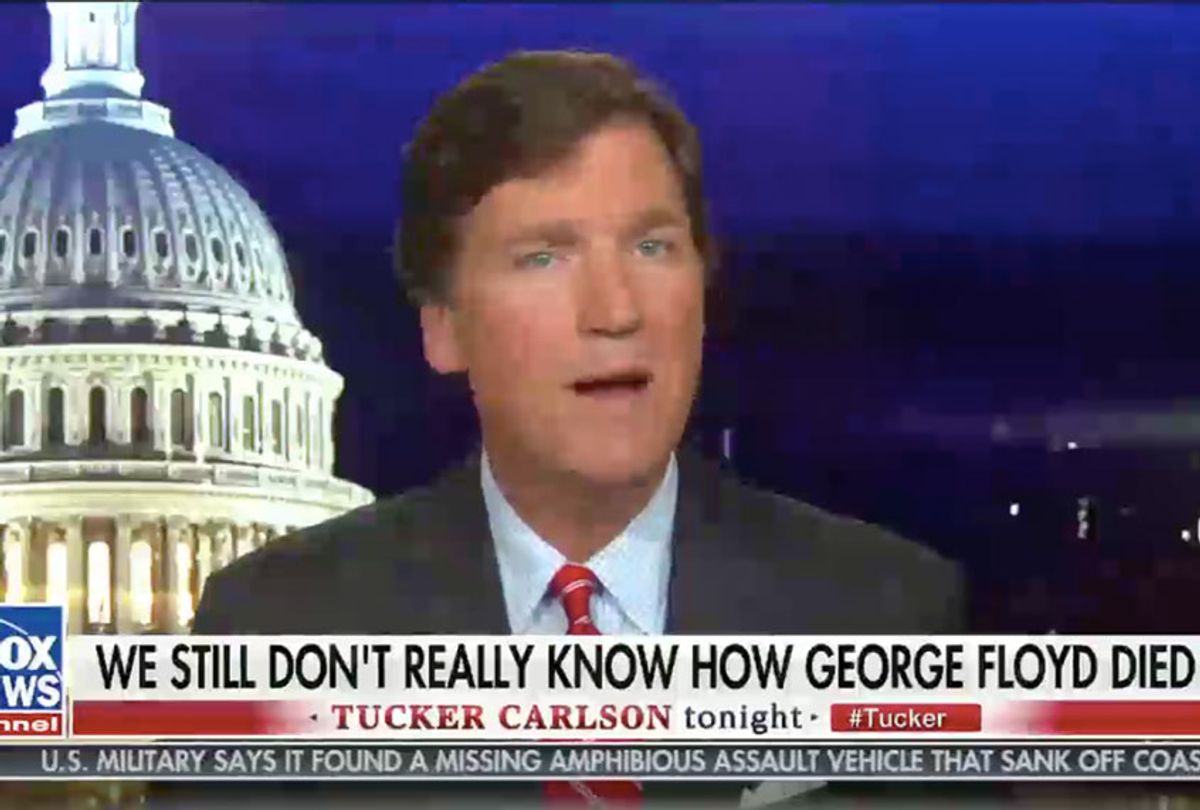 A pair of autopsies both ruled the cause of death a homicide. A "homicide" is any death caused intentionally by another person. Former Minneapolis Police Office Derek Chauvin was charged with second-degree murder, while three former others were charged with aiding and abetting murder. No one has yet to enter a formal plea.

Video released in the aftermath of Floyd's death showed Chauvin kneeling on Floyd's neck for nearly nine minutes. Floyd can be heard saying, "I can't breathe." All four former officers on the scene were later fired.

As Carlson played partial body cam video leaked earlier this month on his show, he claimed that the footage was inconclusive.

"It's striking how little we really know months later about how exactly George Floyd died," Carlson said Tuesday. "The official storyline is clear — it couldn't be clearer. Established news organizations state as a matter of factual certainty that Floyd was, in the words of NBC News and so many others, quote, murdered by a Minneapolis police officer."

Floyd's death was not ruled a homicide by police by the media but rather by multiple autopsies.

An independent autopsy found that the death was "homicide caused by asphyxia due to neck and back compression that led to a lack of blood flow to the brain."

"What we found is consistent with what people saw," former New York City chief medical examiner Dr. Michael Baden, who performed the independent autopsy, said. "There is no other health issue that could cause or contribute to the death."

Carlson made the comments while questioning how Floyd had died. The death of the unarmed Black man sparked nationwide protests against police brutality. Carlson, who has described white supremacy as a "hoax" and an "attack on white people," called the protests "a form of tyranny" in May.

Carlson, who frequently pushes white grievance politics and occasional white supremacist talking points, later responded to the protests by warning his viewers that "violent young men with guns" will soon "make the rules, including the rules in your neighborhoods."

The Fox News host on Tuesday described the protests as a "nation-wide convulsion of violence, destruction, looting, and in some cases, killing." However, data shows the overwhelming majority of protests have been peaceful.

Carlson pointed to the fact that Floyd had fentanyl in his system when he died, citing a narrative sparked by a misleading preliminary autopsy report delivered by prosecutors in Chauvin's initial charging documents.

"We're still not precisely sure how George Floyd died," Carlson claimed. "On what grounds are we dismantling police departments, rewriting curriculums, firing people from their jobs? What exactly is the basis of this cultural revolution that we're all living through?"

Carlson, who was accused by presumptive Democratic nominee Joe Biden's campaign of "hate speech masquerading as journalism" after repeated baseless and racist attacks on his potential running mates, made the comments following an abrupt vacation after his head writer was fired for making racist and sexist comments online.

"Tucker took a 'vacation' in August 2019 after he said white supremacy was a 'hoax' in the wake of El Paso shootings. He took a 'vacation' this summer after his racist writer was outed. And, still, he does this," CNN commentator Amanda Carpenter tweeted. "Fox is fine with this."

You can watch the clip below via Media Matters: