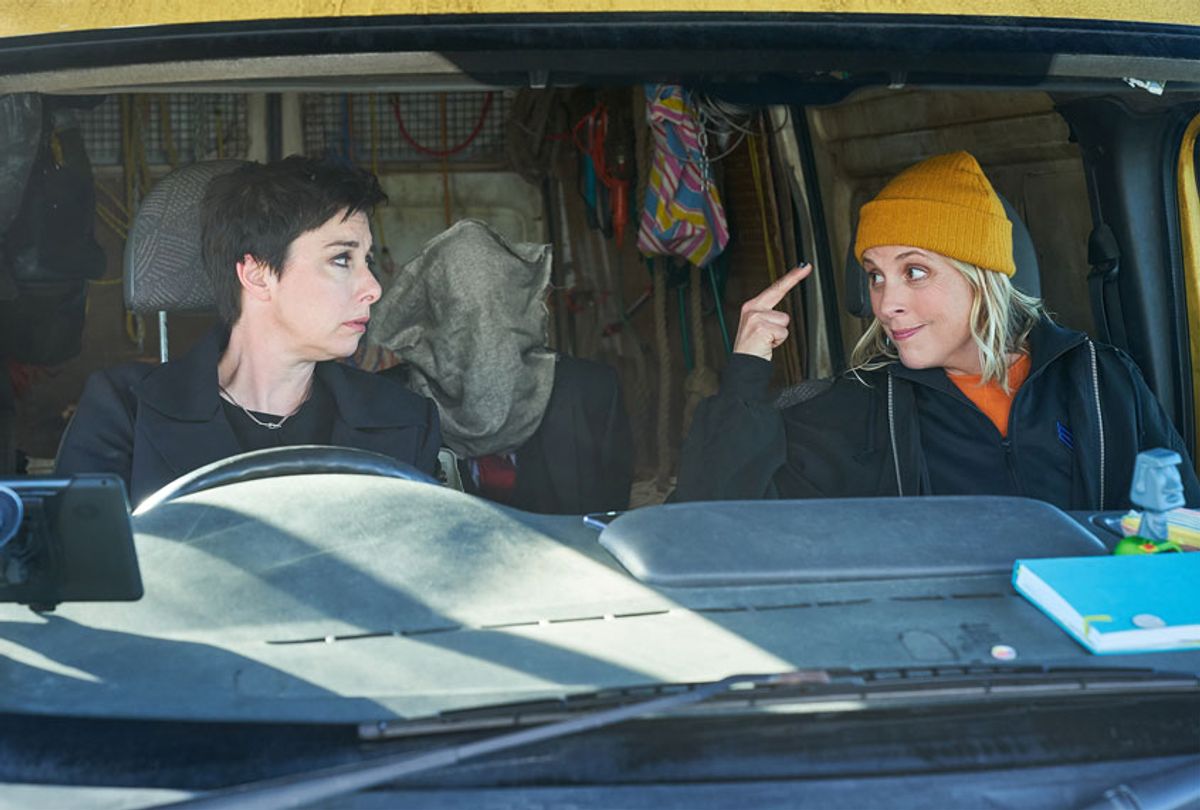 Typecasting is a double-edged sword for any performer. For women in showbusiness the label can be a killer. Ageism and sexism already conspire to shorten women's careers in television and in film. Now imagine life as a performer associated with only certain roles  – say, daytime television presenter, or baking show host. Spend several decades as one of the faces of competition series and talk show, and it becomes increasingly more difficult to be seen as anything else, or in anything else.

For that reason alone "Hitmen" gives fans of British comedy duo Mel Giedroyc and Sue Perkins reason to cheer. Many Americans primarily recognize Mel & Sue, as the duo are known in Britain, as the original (and best) hosts of "The Great British Baking Show" as we knew it on PBS. For their first post-"Baking Show" project they're the headliners of a scripted series that casts them as contract killers Jamie (Giedroyc) and Fran (Perkins).

In many ways Jamie and Fran are basically Mel and Sue, but dark: best friends who are eternally supportive to the expense of all else around them, including their job . . . and their "jobs." The pair murder people at the behest of the shadowy Mr. K, who is all too happy to demonstrate his unhappiness with the people working for him by hiring Jamie and Fran to off them.

The pair, meanwhile, are so casual about their targets' lives being forfeit that they basically pay the same amount of attention to them as garbagemen treat something about to be tossed away, which would seem cold and cruel if not for the comedy duo's charisma and their insurmountable obsession with their own shortcomings.

Thus, targets frequently spend their last few moments on Earth being party to Jamie and Fran's heart-to-hearts about their messed-up love lives. One ends up being a guest at Fran's birthday party when it becomes obvious that her former friends no longer want to share the same room with her owing to the whole risk factor and immorality of her job.

Unpopularity notwithstanding, Fran presents as the savvier of the duo, working overtime to look the part of an assassin, her black eyeshadow an attempt to channel Lisbeth Salander . . . although, in context, it makes her look at lot more emo than intimidating.

Jamie is the messier of the two who nonetheless lands romantic trysts with at least one impossibly hot and hilariously ideal (and, it is implied, presumably out of her league) man glimpsed in an early episode bringing her soup in the middle of a job.

Fran makes do with her crush on the pair's abusive, opportunistic rival Liz (Tonya Cornelisse) who has her own enabling, passive and kindly pillow of a partner in Charles (Asim Chaudhry). And these adversaries demonstrate Fran's and Jamie's relative ineffectuality, which shows up in each 23-minute-or-so romp as physical farce. The duo get their share of murdering done, to be clear. They just bungle each job along the way.

All who delighted at each time the pair chirped "ready, set, bake" on "Great British Baking Show" or reveled in their bawdy but still PBS-appropriate double-entendres can rest easy concerning "Hitmen." They may play killers, but the kind who keep the actors well within the brand they've built over their 32-year friendship and professional partnership.

Plus the humor is, well, adorable. Whatever bite it has can only be described as gentle, and its edges, while not dull, are definitely soft. They're murderers, it's true, but the sort that grant the audience sweet release in doses well under 30 minutes.

Giedroyc's signature gentle loopiness is a defining feature of Jamie, aptly pairing with Perkins' show of know-it-all sharpness, a balance the duo has plied frequently and successfully over the years, so why change now? In acknowledgment of this dynamic, writers and co-creators Joe Markham and Joe Parham squeeze some entertainment out of the implication that Jamie, the more overtly passive of the two, may actually be a bit better at the actual killing part than Fran, who often lets her ego get in the way of efficiently completing the missions.

By no stretch of the imagination can "Hitmen" be thought of as a genre-breakout or even a prizewinning series, but at least it knocks a few cracks in their heretofore cemented association with quirk and perkiness – limiting terms, to be sure.

The aspect of "Hitmen" most worth appreciating is the script's embrace of these character as friends and women of a certain age who are demonstrably dangerous. A subplot concerning Fran's unwise trust in her marriage-of-convenience to a Portuguese man draining her bank accounts leads to a serious conversation about self-worth, one side-splittingly exploited by a captured mark played by "Fleabag" breakout Sian Clifford, transforms into a spat about the trust Fran may or may not have in Jamie's capabilities.

Another episode nestles a debate over whether to have children in midlife and the crucial importance of sororal loyalty inside of a manhunt through a forest that may or may not be inhabited by witches, or weird children, or maybe witch children.

Throughout all of this Jamie and Fran kill people, often in not-so-neat ways, although the series mostly forgoes explicitly showing bullets going through skulls. Jamie turns out to be fairly adept with edged weapons and physical combat, but in terms of fatal gunplay, much of that happens offscreen or at a distance, in a few half hours by punctuating the end of the story with an audible bang as the credits roll.

"Hitmen" won't change the way you look at the pair, for better or worse . . . which means that if you weren't Mel and Sue fans before, this show isn't going to change that – but neither will it turn off their constituency. But it might broaden the scope of how we see two women typically cast as hosts, who deserve their shot at being something heavier and a bit more sinister – but sugary nevertheless.