The HBO Max film, about a man brined for 100 years after falling into a pickle vat, plays with time travel tropes 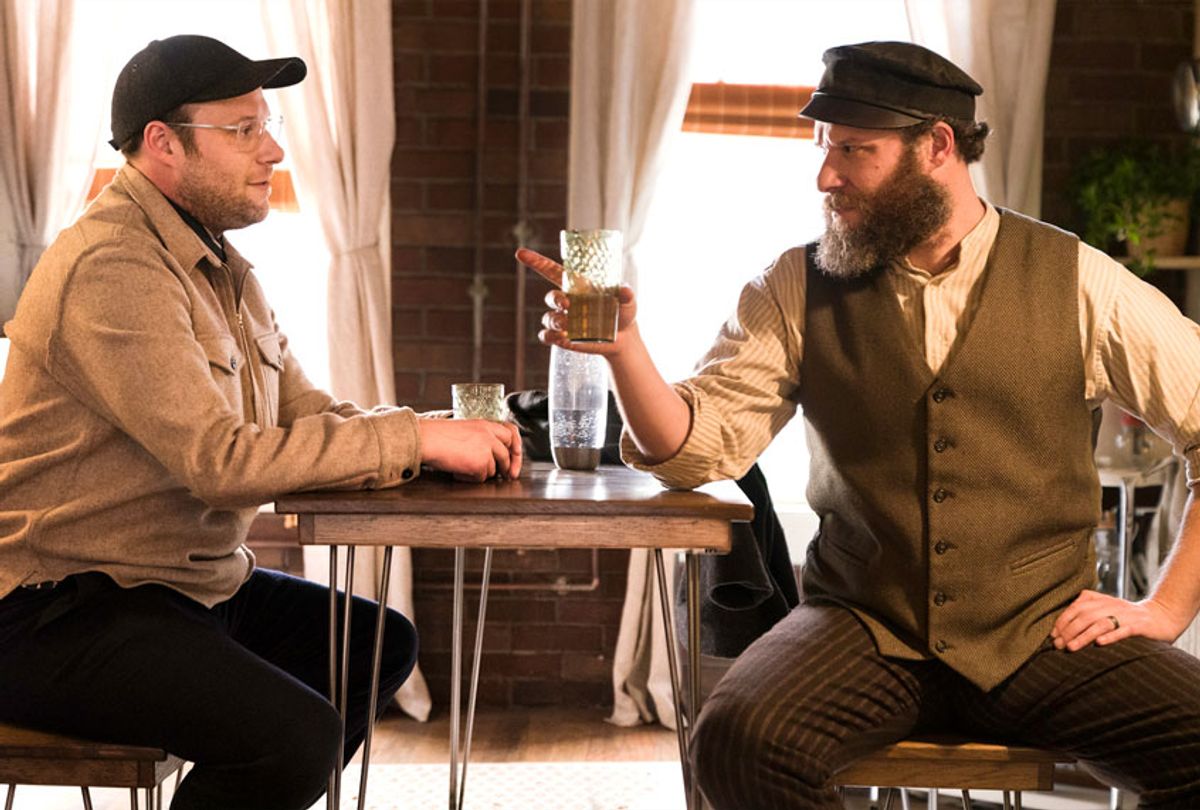 Within the first few moments of "American Pickle," the new Seth Rogen film streaming on HBO Max, it becomes clear that lead character Herschel Greenbaum has desires that are humorously bigger than his tiny, poor Eastern European town of Shlupsk.

"Before I die, I'd like to try seltzer water, to feel the bubbles tickle my tongue," he tells his fiancee, Sarah (Sarah Snook), whose big dream is to become "afford her own gravestone" rich.

After their wedding day is sacked by Cossacks, the two decide to pursue the turn of the century American dream and all that it entails: religious freedom, the opportunity to make something of yourself and five-cent seltzer water. But just as the couple are gaining a foothold in their new life — they had just purchased their grave plots — tragedy strikes.

Herschel (Rogen) falls into a vat of brine at the pickle factory where he works killing rats. His body remains undiscovered for a century, when suddenly he emerges, alive and completely preserved, in 2020 — like a kosher Rip Van Winkle. Herschel's story becomes an instant media sensation and the publicity allows the doctors tending to him to find his only living relative, Ben Greenbaum (also Rogen), a freelance app designer living in Brooklyn.

The two are basically twins (you know, they're both Seth Rogen), but in place of Herschel's thick, mussed beard, Ben is clean-shaven. And while Herschel possesses a boistrous personality — augmented by a thick Eastern European accent — and extreme pride in his Jewish identity, Ben is living a pretty isolated life, and while he was raised in a religious household, he has lapsed away from any meaningful personal ties to Judaism.

From there, predictable time-traveling shenanigans ensue. Once Herschel overcomes his distrust of electric scooters, iPads and taxi cabs (and is finally offered a drink of, you guessed it, seltzer water from Ben's sodastream), he sets about making his own way — again! — in what is very much a new country to him.

He begins selling homemade pickles from a cart on the streets of Brooklyn. They're stored in "reclaimed" jars (read as: found in the trash) and made from cucumbers, rain gutter water, and salt. The hipsters love them for their "artisan simplicity" and Herschel for his "vintage clothes."

This establishes some tension with Ben, who has been stuck for five years listlessly plugging away at a new app called Boop Bop, which rates items on how ethical they are based on the carbon footprint and labor practices used to make them.

"American Pickle" is written by Simon Rich — the creator of FXX's surrealistic romantic comedy "Man Seeking Woman" — who adapted the screenplay from his four-part 2013 humor series "Sell Out," which ran in the New Yorker. In that version, Ben is portrayed as incompetent and entitled, whereas the film version of Ben is tinged with more sadness and sympathy; both his parents died in a car accident, a sudden tragedy that has curtailed his creative output.

The dichotomy of Herschel's forward momentum and Ben's stagnation works as a metaphor for the uneven pacing of much of the film. The first 10 minutes — from our introduction to Herschel to his reemergence from the vat of pickle of brine — are action-packed, but then "American Pickle" lulls into a series of stops and starts (both, however, scored exceptionally well by Nami Melumad).

Often the breaks in the narrative feel like you've been rerouted off the interstate only to get stuck in bumper-to-bumper traffic on a surface road, but there are other moments where the pauses are totally magical. One such example is when Ben plays the oldies station for Herschel, landing on Maurice Williams and the Zodiac's "Stay."

Ben begins dancing to the beat, a kind of clunky shuffling back and forth, and finally cajoles Herschel into joining him. Their styles are different — Herschel throws in some arm flourishes— but their body movements are similar. It's a striking visual cue that demonstrates how these two men are so different, but still so intrinsically connected by blood and culture.

The filming of these dual Rogen scenes is incredibly deft. After an early moment where Herschel hugs Ben where I briefly considered whom Rogen was actually hugging, "American Pickle" is technically seamless enough that I wasn't distracted by film magic concerns again.

This also speaks to the ultimate strength of "American Pickle." Rogen's acting alongside himself is the film's most potent ingredient. In Herschel and Ben, he creates two very distinct characters with two sets of unique mannerisms. While Ben is more your expected, amiable Seth Rogen creation (short, raspy stoner laugh and all), he serves as a tremendous modern foil for Herschel's old world accent and gruff outlook on modern life.

The interplay between the two isn't enough to fully explore some of the most ambitious themes raised in "American Pickle." In the 88-minute run time, the film reaches towards topics of cancel culture, First Amendment rights, internet fame, modern religiosity  and "hipsterdom," but seems to recoil from deeper interrogation, using their introductions instead as quick punchlines or pat plot devices. (The Holocaust, which would have happened after Herschel's "death" is notably missing from the pair's discussions).

That said, it's apparent from the beginning of the narrative what this story is about. It's about all the same things that Herschel's jars of pickles grow to represent throughout the film — the labor of immigrants, the importance of family and the ways in which we honor our culture and those who came before us. Will it be the most well-balanced thing you've ever consumed? No, but it's a simple, satisfying bite.

"American Pickle" is now available to stream on HBO Max.