"The One and Only Ivan" may feature Chaka Khan voicing a baseball-loving chicken, but it will also make you cry 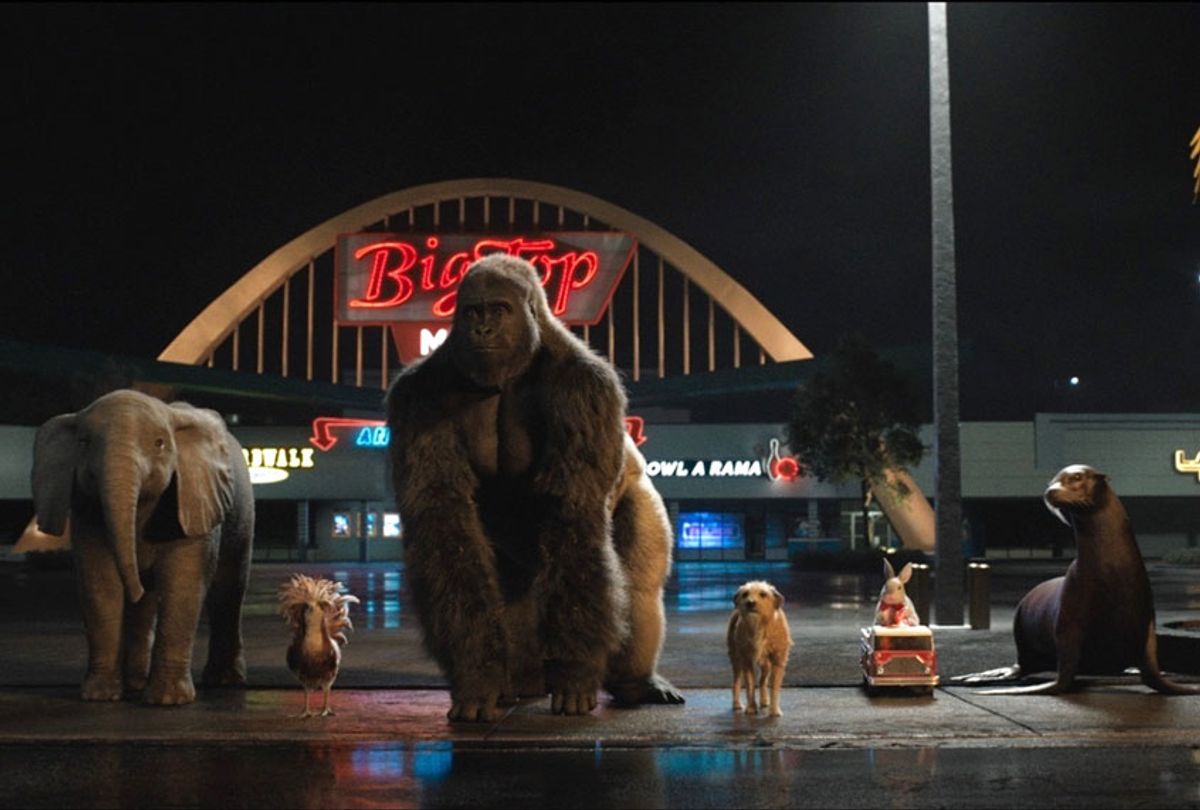 Whether you think of yourself as a marshmallow or believe you have a heart of steel, there's a strong probability that "The One and Only Ivan" is going to make you cry . . . or well up, at least.  This is the way animal-centric Disney movies are supposed to work. Formulated to tug at the heartstrings by nestling marrow-deep sadness underneath a whole mess of sugar, these movies are the cure for any emotional constipation you may be experiencing right now.

"The One and Only Ivan" stars a gentle 400-pound silverback gorilla raised in captivity (and rendered in PETA-friendly CGI), the sort of sweet hero drawn for maximum emotional impact. Toss in Sam Rockwell's nice guy voice and it becomes the cinematic equivalent of a weighted blanket.

This movie truly earns whatever tears it coaxes forth, however, by presenting a story that ostensibly revolves around classic Disney bromides about specialness, friendship and "the power of visualization," and transforms into a parable about altogether more potent and socially relevant themes. Parents and kids can choose to see its daring or let it lope on by, but if you're looking for a kid-friendly way to introduce concepts of exploitation and civil disobedience, "Ivan" is a fine place to start.

The story is taken from Katherine Applegate's Newbery Medal-winning children's book that published in 2013. It, in turn, is based on the true story of an actual gorilla raised by a family in Washington state until he got too big to keep in their home. From there he took up residence Tacoma mall and did not go outside for nearly three decades.

Tragic, right? Not for Rockwell's animated rendition of Ivan, who cheerily narrates the circumstances of what he considers to be a bucolic existence. Ivan is the star of the mall's circus, one that includes a trained standard poodle (voiced by Helen Mirren) and a bunny that can drive (Ron Funches). Adorable!

Mack, the owner of the circus (Bryan Cranston) is an affable fellow who treats all of his animal friends like family, and Ivan's closest confidantes – an elephant named Stella (voiced by Angelina Jolie) and Bob, a stray dog who keeps sneaking into his habitat (Danny DeVito) – keep him company, as does an artistic little girl named Julia (Ariana Greenblatt), who patiently makes art by his enclosure while her father and Mack's assistant George (Ramon Rodriguez) tends the place.

Every animal in the circus enjoys his or her role regardless of how unnatural it might be, mostly because they don't know any better. Or maybe they do. An early tell of what's coming for Ivan is when he cheerily tells his audience in a voiceover narration that his job is easy: Mack tells him to be himself. Only the stage version of the Ivan Mack wants to sell as the "real" him snarls, roars, and thumps his chest, and is nothing like the sweet ape we sit with behind the curtain.

Outside of their small corner of existence, ticket sales for the show are dwindling and the mall itself is hollowing out. So Mack acquires a new attraction: a baby elephant named Ruby ("Home Before Dark" and "Florida Project" star Brooklynn Prince), whom Stella takes under her protection and lulls to sleep with bedtime stories about the open savannahs where they came from, and where they're meant to be.

Think of  "The One and Only Ivan" as the latest stage in the Disney's library's progressive transformation in the way it anthropomorphizes wildlife, and presents the circus. By coincidence when I opened my Disney+ app this week the film promoted in the first slot on its homepage was none other than 2017's "The Greatest Showman," the Oscar-nominated cinematic musical starring Hugh Jackman as a sanitized and highly fictionalized version of P.T. Barnum.

Barnum's name is synonymous with the American circus, and his long-running traveling show shut down the same year that "The Greatest Showman" came out in theaters. Before branding the quintessential big top performance, however, the real Barnum made his fortune by hawking hoaxes and "human curiosities" in his New York Museum and had a particular fondness of displaying Black people as grotesqueries, including referring to a disabled man named William Henry Johnson as an "It."

"The Greatest Showman," in contrast, scrubs this history clean by casting Zendaya as a trapeze artist with whom Barnum's playwright partner, played by Zac Efron, falls in love. The other people of color in the story are specimens of human perfection, including Yahya Abdul-Mateen II, who plays the brother of Zendaya's character.

I reference this as a point of contrast between one fantasy vision of the circus and another, with Disney's 2019's dark and mechanical live-action "Dumbo" in between. "Ivan," directed by Thea Sharrock from a screenplay by Mike White, achieves a balance between hard reality and Disney dream in a way that past wildlife and circus fables could not because it must.

All of the studio's remakes have taken cues from the company's Disneynature documentaries, a subsidiary form partly in response to the BBC's highly successful nature unit and the overwhelming response to its crown jewel "Planet Earth" in 2006.

Given the surge in popularity for such documentaries in recent years, and with their conservation messaging growing more urgent, it follows that the messaging within Disney's fictional animal tales should probably harmonize with reality.

Hence – without spoiling it for anyone who hasn't seen the updated "Dumbo" yet – Dumbo can't simply find a happy ending by gaining respect while still remaining chained up in the circus, and – again, no spoilers – Ivan eventually comes to realize that maybe he's not meant to live in a glass-walled enclosure.

Deftly, too, "The One and Only Ivan" uses its main character to explore the impact of repressed trauma and handles themes of exploitation with nuance. Cranston's circus owner isn't subjected to a heel turn in front of our eyes, which is a wise move considering that he's basically presented at the outset as the equivalent of The Man with the Yellow Hat from "Curious George."

The actor plays Mack with a paternal warmth and treats his animal charges as friends and partners, which they appreciate until they don't. However, that awakening isn't due to a specific transgression on Mack's part as much as an awakening from an ignorant slumber. To Mack, his animals are both his buddies and his business. To Ivan, Mack is his parent and his friend who may be deceiving him.

And this tension steadily builds to a climax that either a lesson on self-liberation and the power of quiet gestures to change minds and move the masses, or a heart-melting moment that demonstrates the power any of us has to set forth a better vision of the world.

"The One and Only Ivan" stops short of swinging into full-blown "wokeness" territory; regardless of how a person filters its meaning, we're still talking about a movie that has Chaka Khan voicing a baseball-playing chicken. But anyone might appreciate the sly intelligence it flexes alongside its tearjerker machinery. Making people cry is par for the course with movies like this. Engaging the audience's minds and moral compass, as this film does, is a tougher act to pull off. The fact that this family film does both is worth applauding.

"The One and Only Ivan" is streaming on Disney +.

Circus Disney Dumbo P.t. Barnum Review The Greatest Showman The One And Only Ivan Tv