The series creator reveals the many tests the Mars-bound crew will have to survive, from dehydration to isolation 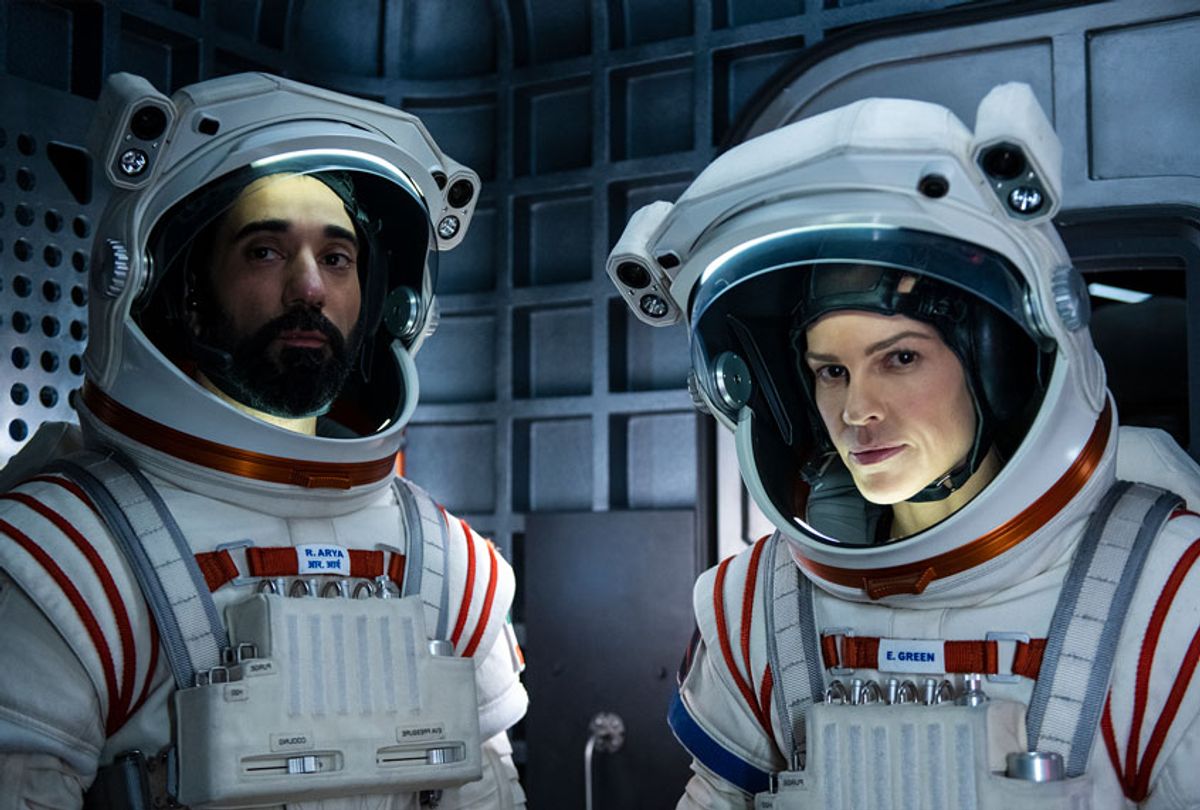 In space, taking a pee could potentially kill you.

That's what astronaut Scott Kelly discovered on one mission when he went to relieve himself but found a hose leaking the chemical called pretreat instead. It's needed to recycle urine into drinkable water, and a knee-jerk reaction on his part turned the sphere of "floating" chemical into a fireball.

Author Chris Jones wrote about this strange-but-true incident in the Esquire article "Away," which inspired the Netflix series of the same name starring Hilary Swank as the leader of Earth's first manned mission to Mars. The fireball faux pas is the first major challenge for Commander Emma Green (Swank) and serves to undermine her authority with the crew. Not a good omen.

Andrew Hinderaker spoke to Salon about creating the space drama and what the pretreat incident reveals about Emma's fitness as a leader.

"It illustrated what was heroic and also a little broken about her, that she is somebody who, when there is danger, she will run into the fire before she allows her crewmates to be put into harm's way, which is a quality you want in a the commander," he said. "At the same time there are moments where maybe a chemical leak should be handled by the chemist."

That chemist would be Dr. Lu Wang (Vivian Wu), who, along with botanist Kwesi Weisberg-Abban (Ato Essandoh), medical officer Ram Arya (Ray Panthaki), and mechanical engineer Misha Popov (Mark Ivanir) make up the rest of the Mars Joint Initiative crew on the spacecraft Atlas. Throughout the three-year journey – which requires stops at the International Space Station and the moon first — the tight five-person crew will be tested by both the technical challenges of longterm space travel as well as its effects on mental health.

The fire establishes the life-or-death stakes from the beginning of the 10-episode series. "Fire is the sum of all fears in space," Emma says, and her family is reminded that the astronauts are looking at a 50-50 chance of survival on the mission. This is not about fixing a flat or riding out some turbulence; every trial the crew will face is potentially fatal. The writers had no shortage of grim yet believable challenges — and solutions — to throw at the astronauts, thanks to plenty of research and resources.

"I was certainly incredibly lucky when I was brought this article and pitch [for] the show. Chris Jones who wrote it became just an invaluable resource. Chris has written a number of really celebrated articles about space," said Hinderaker. "And then I also immediately went to NASA and got to meet a lot of astronauts and their families, and talked to a lot of folks at Mission Control, a lot of engineers. That's something that Jessica Goldberg, the showrunner, and I continued at JPL."

One astronaut told Hinderaker that he wouldn't want to go to Mars, based on a problem he encountered while orbiting Earth on the International Space Station.

"He said, 'Well, in the International Space Station, the water system would break down all the time. We had a backup system and we could generally repair the primary [system]. But if that backup system failed, you're on an international Space Station. You can get in the Soyuz and jettison back to Earth. Worst case scenario, you're 300 miles away. That ain't happening on Mars."

Naturally, the "Away" writers couldn't resist breaking the Atlas water system and then trying to figure out how the crew could fix it. Not only are resources limited, but the trip to Mars takes approximately eight months one way, and the further out Atlas goes, the harder it is to communicate with and receive troubleshooting suggestions from Mission Control.

Similarly, communication with friends and family will be more difficult the closer Emma and the gang get to Mars. As the coronavirus pandemic has shown, technology is crucial to staying in touch with loved ones, but no amount of waving from screens can take the place of actually spending time together.

"But then the farther out you go, the more compromised a signal can get and the longer the delay is. If we were to play that literally on the moon, I believe it's roughly a one-second delay on the phone calls, and then you get out farther and it grows. It would have become unwatchable pretty quickly if we did that literally. But what we tried to then dramatize is [how] the farther out they go, those calls start to freeze, they start to get compromised, until finally they they cut out."

In fact, one character becomes somewhat broken by not being able to hear from their family in a timely fashion, and it requires the support and intervention of the rest of the crew to shore them back up.

"We really responded to the idea of what would it be like to not be able to phone call," said Hinderaker. "It's strange in this moment, as much as many of us are coming to have a love-hate relationship with Zoom, we are still coming to appreciate the importance of that in new ways. So the idea of that going to be taken away — and in the best case scenario [for a trip to Mars], if everything goes right, it's gone for two years."

One of the ways that the astronauts stay entertained and tethered to Earth is to celebrate Christmas for what turns out to be a Very Special Holiday Episode of "Away," written by series executive producer Jason Katims of "Friday Night Lights" and "Parenthood" fame. Misha puts on a puppet show with marionettes, which take on a new life in zero-G, and the crew gets their first taste of spinach, which Kwesi has successfully grown on board.

"What I really love about that, their holiday celebration at the end of the episode, is it is at once miraculous because it is so familiar in its trappings and then also so special because it's its own thing entirely," said Hinderaker. "Nobody has been where they are when this holiday comes around . . . the greens they eat are so much more special. Astronauts will talk about that, to eat fresh food in space, it almost makes them burst into tears immediately."

Risking one's life, being parted from one's family, missing out on basic things like food and water — is it all worth it? Mankind has always explored, but a manned mission to Mars is still the stuff of science fiction — still too challenging, still impossible.

No matter how many astronauts Hinderaker spoke to, he couldn't land on any one answer to the question, "Why Mars?" One told him that once she experienced zero gravity, she understood that "gravity was only one way in which humans were meant to live," and by extension, making it to Mars would expand humanity's perspective about living.

Astronaut Don Pettit gave him a couple of answers. One points to the theory that a piece of Mars broke off and struck Earth, starting life on this planet. Going to Mars would therefore be a coming home. Pettit also said, "Once the moon felt it was impossibly far away, and now it's in our backyard. We went there. If we go to Mars, it will become in our backyard, and imagine what's possible then."

In the first episode, viewed during a pre-launch press conference, Emma says, "Reaching Mars might be our greatest achievement, not only for science but for the future of our planet."

The achievement itself, one that is so very difficult and requires the cooperation of many nations and people, is Hinderaker's focus.

"I think the argument is not so much as some might say, that we're destroying our planet and we might need another place to live," he said. "We shouldn't go there to save humanity. We should go there to remind us why humanity's worth saving."

"Away" is available to stream beginning Friday, Sept. 4 on Netflix.