Humans and/or their robot friends will travel to Mars, several asteroids, many moons and more in the 2020s 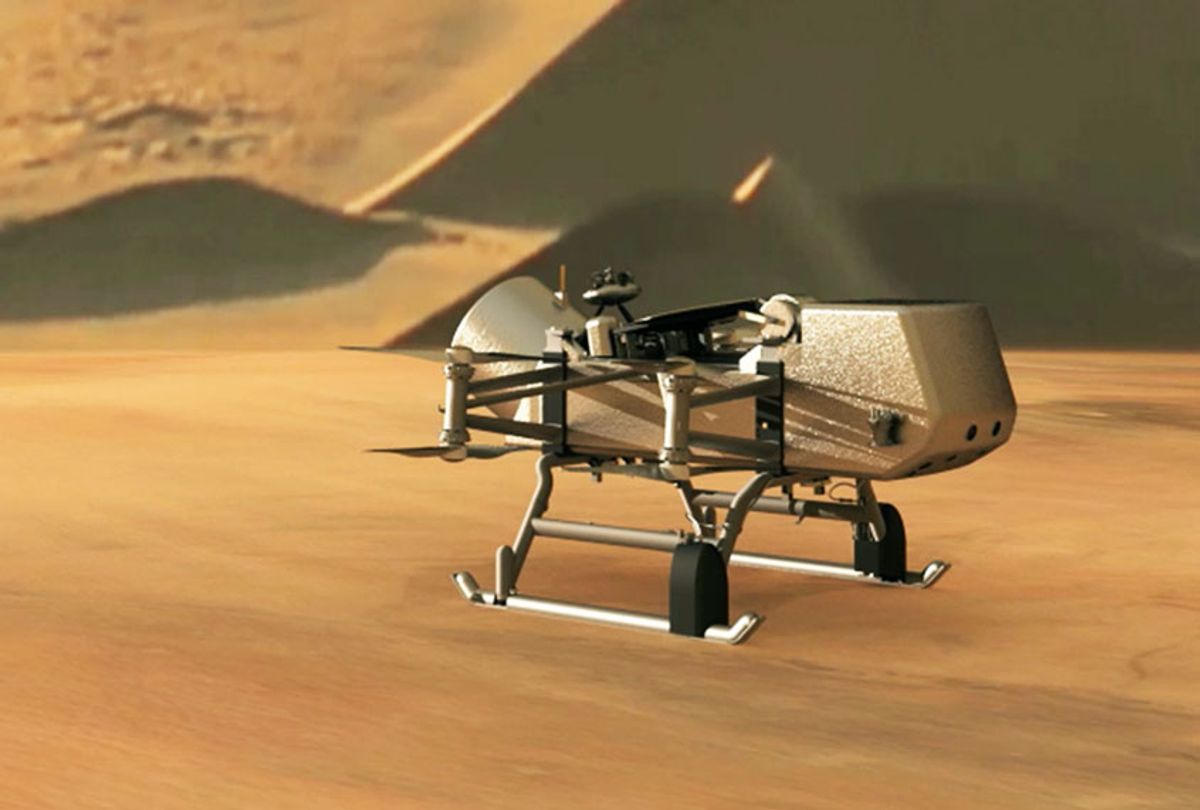 This illustration shows NASA’s Dragonfly rotorcraft-lander approaching a site on Saturn’s exotic moon, Titan. Taking advantage of Titan’s dense atmosphere and low gravity, Dragonfly will explore dozens of locations across the icy world, sampling and measuring the compositions of Titan's organic surface materials to characterize the habitability of Titan’s environment and investigate the progression of prebiotic chemistry. (NASA/JHU-APL)
--

The 2010s were troubled times politically, but in terms of space exploration this was a red-letter decade. In the 2010s, Humanity detected marsquakes for the first time, and watched massive dust storms on Titan. Astronomers assembled a catalogue of 1,822 potential stars where Earth-like planets could exist, bringing us closer to the dream of discovering extraterrestrial life. A Japanese probe explored an asteroid up close, giving us a better understanding of our own solar system, and an interstellar asteroid that was more bizarre than anyone imagined slingshotted through the solar system. We saw Pluto in detail for the first time ever, and astrophysicists started to suspect that there was an enormous ninth planet in our solar system so distant and so dark that we have merely failed to spot it (but hopefully will soon).

The decade ended with the announcement of a new mission back to the moon, which is just one of the many missions that are planned to make history this next decade. Here is what humanity has to look forward to.

The history of space exploration has shown us that Martian rovers are particularly resilient. In February, NASA shared the news that the agency’s Mars rover Opportunity, which lost power during a massive Martian dust storm last June, had been officially declared dead. While the news caused a national outcry of grief on Twitter, Opportunity, which landed on Mars in 2004, far surpassed its design for a mere 90-day mission. The car-size Curiosity rover continues to putter around Mars, and will soon be joined by a new rover which NASA plans to launch between July 17, 2020 and August 5, 2020, from Cape Canaveral Air Force Station. Called the Mars 2020 mission, it is expected to land February 18, 2021 in Mars' Jezero Crater, and has a mission length of  one Mars year, which  is equivalent to 687 Earth days. This rover is more capabilities than any previous ones, and will also be able to drill and collect samples of rocks and soil. (Learn more on NASA's page about the rover here.)

On an unplanned date in 2021, the nearly $9 billion James Webb Space Telescope — the overdue successor to the Hubble Telescope — will launch on an Ariane 5 rocket at a spaceport located near Kourou, French Guiana. Its mission is to observe the first galaxies that formed in the early universe, in addition to see stars forming planetary systems. According to NASA, it will be the leading observatory of the 2020s and help thousands of astronomers worldwide. Read more here.

Sure, planets, moons and stars are interesting, but what about the stuff in the universe that isn't made of normal, baryonic matter? Given that the type of matter that you and I are made of only constitutes 5 percent of the universe, it is understandable that scientists would want to study the other stuff — in this case, dark matter and dark energy, which comprise the other 95 percent.

Euclid, a mission planned by the European Space Agency (ESA) that has received contributions from NASA, is meant to discover new insights into the "dark side" of the universe — such as dark matter and dark energy. In order to collect data, an orbiter will launch from Cape Canaveral Air Force Station in 2022. A telescope will conduct a survey of billions of distant galaxies, which are moving away from us at an abnormally fast rate. Scientists will study these galaxies from to better understand this phenomenon. Learn more here.

Is Europa, Jupiter’s fourth-largest, icy moon, suitable for life? Scientists hope to figure that out with the forthcoming Europa Clipper mission, expected to launch in 2023. Some scientists think that Europa is the best place in our solar system to look for life beyond Earth. As Salon reported in November, astronomers directly detected water vapor in Europa’s atmosphere. “This doesn’t necessarily mean the water vapor is coming from an ocean,” NASA planetary scientist Lucas Paganini told Wired. “But it does seem like this detection is connected to liquid water under the surface.” Learn more about the mission here.

First woman on the Moon

In 2019, we celebrated the 50th anniversary of the historic Apollo 11 Moon mission. NASA says in 2024 the space agency will take astronauts — including the first woman — back to the moon. Using “innovative new technologies,” according to the mission’s website, the lunar exploration mission will explore more of Earth’s moon than ever before. You may wonder why we need to go back to the moon? NASA says the mission will be a building block for human and robotic explorers to work together before heading to Mars. On Earth’s moon, they will focus on exploring the lunar south pole, living and operating on the surface of another celestial body. Learn more here.

Speaking of Mars, the Red Planet’s surface won’t be the only focus of the next decade. The Japan Aerospace Exploration Agency (JAXA) is planning on launching The Martian Moons eXploration (MMX) mission, which will orbit Mars’ moons Phobos and Deimos. Unlike many planets' big moons that formed at the same time as their parent worlds, Phobox and Deimos are captured asteroids with decaying orbits, and will one day smash into Mars' surface. The mission is planning on entering Mars’ orbit in 2025 and return a sample from one of the moons to Earth in 2029. Learn more here.

According to the European Southern Observatory, the ELT "will answer fundamental questions regarding planet formation and evolution, the planetary environment of other stars, and the uniqueness (or otherwise) of the solar system and Earth.” The extremely large telescope has been in development since 2005 and will have a 39-meter main mirror and will be the largest which will make it the largest optical/near-infrared telescope in the world. It is expected to have its “first light” in 2025. Learn more here.

In 2022, NASA plans to launch a spacecraft to better observe this mysterious celestial body with a very Freudian vibe. According to a news announcement, the mission will explore and measure the magnetic field of Psyche, collect high-resolution images, and map its elemental composition. The spacecraft will arrive at the asteroid on Jan. 31, 2026. Learn more here.

In 2026, NASA will launch Dragonfly, an octocopter (read: drone) lander, to land explore Titan, which is the biggest of Saturn’s 62 known moons. According to NASA: “[Dragonfly] will explore and sample various locations on Titan, tens to hundreds of miles apart, in order to characterize the habitability of the moon’s environment, investigate the progression of prebiotic chemistry, and even search for chemical hints of water-based or hydrocarbon-based life.” Titan is the only world in our solar system with an atmosphere at a similar pressure as Earth. While it will launch in 2026, it won’t reach Titan until 2034. Learn more here.

NASA is still working hard to have humans orbit Mars, or land on it, by 2033. “We are working right now, in fact, to put together a comprehensive plan on how we would conduct a Mars mission using the technologies that we will be proving at the moon,” NASA Administrator Jim Bridenstine said in July. “I am not willing to rule out 2033 at all.” However, an independent report by the Science & Policy Institute published in February 2019 concluded that such a timeline isn’t possible with NASA’s current funding.