"Sometimes I look back at some things and I'm just like, 'Ugh. Paris, is this who you are?'" Hilton tells Salon 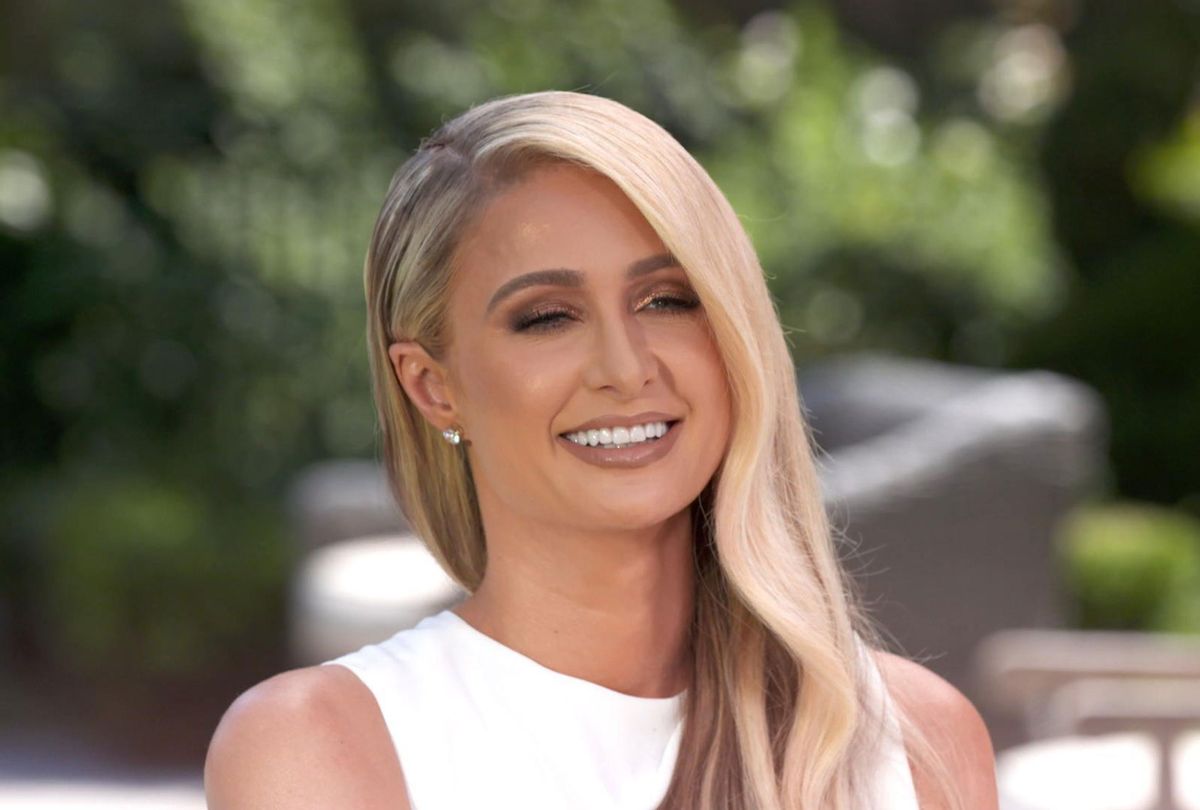 Paris Hilton is no dumb celebutante. Among the many misconceptions the Hilton heiress, ur-social media influencer and businesswoman is hoping will be cleared by the new biographical documentary "This Is Paris," that may be the foremost.

Or that she commands a reported $1 million for each of her DJ gigs. Before the pandemic hit, she was spending nearly 70 percent of her time on the road promoting her makeup, her accessories, or headlining gigs. That's not the work of a fool. On the contrary, Hilton refers to her "brand" countless times throughout the film, because the brand is who she is. The brand is quite literally her life.

And the documentary shows her coming to terms with the twinned notions of what it means to be a character and a brand, the quandary within knowing that they are one in the same, that they are who she is – and that may not easily square with who she wants to be anymore.

"On such a deeper level, I want to be known as an inspiration as not only a businesswoman, but someone who spreads love and light," she told Salon in a one-on-one interview that took place earlier this year. "I have a voice and I want to use it in the right way and not in the way I had before."

She adds, "I just feel that right now, especially with women, to be smart and intelligent and to show that off and to have a message is way more important than, you know, wearing pink and trying to be cute and playing dumb. Like, I don't know. Sometimes I look back at some things and I'm just like, 'Ugh. Paris, is this who you are?'"

This could interpreted as "Paris Hilton finally grows up." This could also read as the simple wisdom of a simple rich girl. How you interpret depends on the voice you imagine Hilton using to speak those words and how you feel about Paris Hilton.

"This Is Paris" was supposed to hit YouTube in early spring after premiering at the Tribeca Film Festival in April, which is the reason why I was able to sit down for a conversation with Hilton in Pasadena in January, where she appeared as part of an industry event for the Television Critics Association. Prior to our one-on-one, though, I happened to run into Hilton in another part of the hotel, granting me a look at each of her faces. She smiled, assuming I recognized her, leaned in for an air kiss and said "hi there, sweetie" in her signature coo.

A few hours later, when we got down to business, Hilton sounded like a 39-year old woman with her head screwed firmly onto her shoulders. "This film, it's actually who I really am," she said. "It's all real, it's all very raw. It's all very deep. And it was almost like a therapeutic experience because in the beginning of the film, I didn't even really know who I was at that point. … Because I've just always been so used to, you know, speaking in the baby voice and saying, 'that's hot,' and like doing this whole thing."

Hilton went on to say, "Towards the end of the film was when I really started to realize who I am. I had a lot of epiphanies and realizations. I just realized that going through some very traumatic experiences in my life as a teenager shaped who I was and why I made up that character. And it was almost kind of like this mask to hide who I really was."

The very existence of "This Is Paris" is a turn-off for a large swath of people, especially to anyone who lived through her tabloid heyday and decided a long time ago they'd seen more than enough of her. At one point in recent history she was one of the most popular women in America — famous for being famous and overexposed in all the wrong ways.

When she rose to the top the public's consciousness as the co-star of "The Simple Life," she was only 21 years old, and by then there was already a sex tape circulating that was released by an ex-boyfriend.

And while her peers and erstwhile best friends successfully pivoted to enjoy long careers on TV, Hilton's star burned brightly and appeared to fade quickly. Her "Simple Life" co-star Nicole Richie went on to serve as a judge and host several non-scripted reality series, founded her own lifestyle brand and published two novels.

Kim Kardashian, seen in "This Is Paris" on Hilton's arm before she soared into her own fame, credits Hilton for showing her the path to "breaking the Internet" by being a pioneering influencer, by originating the modern concept of the "selfie" by many reports, and by being the first person to truly turn her very existence into a marketing tool.

Few need to be reminded that Kardashian and her family parlayed their fame into a multifaceted empire worth billions; the announcement that "Keeping Up with the Kardashians" would finally come to an end after 20 seasons is proof that she's succeeded. When Kardashian dove into prison reform advocacy, people took her seriously enough for Oxygen to air a special in April, "Kim Kardashian West: The Justice Project."

Meanwhile, when Hilton attempted to launch her own series on Oxygen in 2011, "The World According to Paris," its ratings were so poor that the cable channel quickly nixed it.

More recently in 2017, she caught flak for suggesting in a Marie Claire interview that the women accusing Donald Trump of sexual misconduct were "just trying to get attention and get fame." ("Obviously I have a way different opinion now that I know everything I know," she said to me when asked about that quote, "and I wish that they didn't print something that was spoken before any of these accusations were even out. 'Cause I wasn't even aware of any of that.")

But that doesn't mean nobody is interested in buying what Hilton is selling; quite the opposite. That factor is what intrigued Dean about Hilton; the director of "Bombshell: The Hedy Lamarr Story" has an enduring interest in women whose image either camouflages their rightful claim as innovators or buries it entirely. Lamarr, a star of Hollywood's Golden Age, was also a gifted inventor, although most people remember her face more than her intellect.

Her work ethic and business acumen notwithstanding, "This Is Paris" isn't apt to change the minds of any Paris Hilton detractors. But as a whole, it stands as a fascinating study of what happens when a human being's personality is entirely subsumed by the construct she creates. The film itself reflects that: it takes 30 minutes of its 105-minute runtime to dig past the glamorous façade, in which Hilton reminds us of all that goes into carefully crafting her image — including the astonishing fact that she's never been photographed in the same outfit twice.

Then, at the end of one night at an event in support of her skincare line, she collapses — and the crack appears. She has recurring nightmares and insomnia. She gets about three hours of sleep before she's on to the next gig.

Later, in another of her filmed conversations, Hilton speaks in a normal tone, a very intimate sotto voce... but also vacillates between that and her baby voice without thinking about it. And it becomes apparent that Hilton can't entirely control the character of Paris Hilton. Her baby voice doubles as a verbal tic, as in a sequence when she talks about losing her family's trust after breaking curfew and parading through the New York nightclub scene in the late '90s.

"There was no convincing them, no matter what I said," Hilton explains in her normal voice, her face registering a profound discomfort and sadness as she tells most of her story. But as she continues, shades of that "character" she's shown the world kick in. "It made me not trust anyone," she said, her voice retreating into the little girl figure as she finishes, "not even my own family."

The hook buried deep within "This Is Paris" is the traumatic episode in her past which she believes shaped the person she is today: an 11-month stay at Provo Canyon School, a psychiatric residential treatment center in Utah where her parents Kathy and Rick Hilton sent Paris in an effort to quell her teenage rebelliousness.

As Hilton recalls in the movie, this was the last of many "emotional growth schools" to which her parents sent Paris in an effort to shape her into a more respectable representative of the family.

"Fear, to me, is the most powerful feeling there is – fear," Kathy says in the film, explaining her frustration with Paris' unofficial debut as a New York Club kid. Inadvertently, fear was the bitter medicine her daughter says she received as these schools. Hilton recalls running away from one and being beaten in front of other kids as a warning to show what happens to kids who try to escape.

At Provo Canyon School, she says she verbally and physically abused and fed an assortment of pills. When she refused to take them she was locked in solitary confinement without clothing for up to 20 hours at a time. Dean captures the moment that Kathy is made aware of what actually happened at the place she sent Paris, which she believed to be a boarding school for troubled teens. Kathy Hilton appears to be genuinely shocked. That story, Hilton explains in the documentary, was never intended to be a part of the brand.

Hilton has shared her allegations about Provo Canyon widely in recent weeks as part of the promotional runway leading up to the launch of "This Is Paris," which is an interesting tactic given the secrecy she insisted upon during her junket appearance – she refused to comment on it directly, saving it for the film's release. This, too, speaks to her hyper-awareness of her brand, while also calling attention to how that obsession plays into the perceived genuineness of "This Is Paris."

For while Hilton's insistence that Dean's portrayal of her is real, unfiltered, and that she had zero editorial control, what comes through beyond all doubt in the film is that Hilton's entirely life is one long span of editing. There are times early on in the film when Dean instructs Hilton stop attempting to perfect her walks down a hallway, to simply move like herself. But what happens when your entire day, from the moment you wake up, is spent assuming that somewhere there is a lens capturing every move?

Rare are the moments when we see Hilton in a state that the average person would think of as "natural" and "unpracticed." However, there's no indication — in every shift and pose when she's not onstage — that she isn't being her version of honest and normal. It's unsettling and also more than a little sad.

This, too, may be a new addition to the brand.

"When I look around my life, like… it's like a cartoon," she huffs frustratedly near the ending of the film, during one of those epiphanies she speaks of, lines delivered while standing in the center of her enormous walk-in closet. "I don't… it's like, I've created this fantasy world cartoon. The thing is, I don't really give a f—k about any of these things… I love just chilling in, like, my sweat suit, my socks, being at home. And then all of this other stuff is part of the character."

This cuts to a few moments later when we see her bouncing down her stairs and greeting a few guests waiting for her below, cheerily cooing in that signature baby voice: "Heeey."