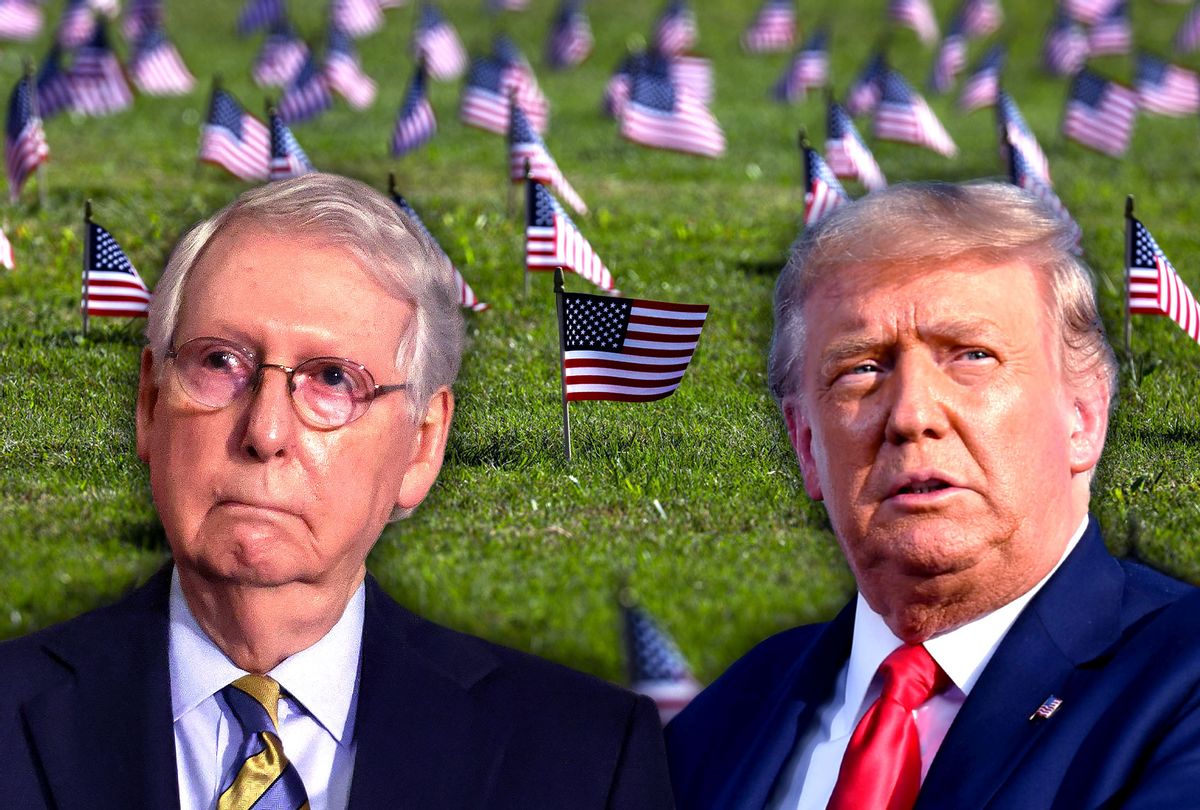 On Tuesday, the official death count from the coronavirus pandemic in the United States passed 200,000. A memorial was placed in front of the Washington Monument to mark this grim milestone, and Speaker of the House Nancy Pelosi there not just to share the grief, but in anger.

"This was preventable. Not all of it, but much of it," Pelosi said, citing a failure to "embrace science over politics" in leadership, a not-so-oblique reference to the way that Donald Trump has, at every turn, either been incompetent or actively undermined efforts to slow the spread of the virus.

Meanwhile, Trump was running his mouth at reporters on the White House lawn Tuesday afternoon, but on one subject — the 200,000 people he let die — he was uncharacteristically short on words.

Q: Why haven't you said anything about the US hitting 200,000 coronavirus deaths?

TRUMP: "Go ahead. Uhhhhh. Anybody else?" pic.twitter.com/gUv1kgG9OT

Always playing his role as the corny movie villain who gives his evil scheme away in dialogue, Trump wanted instead to talk about the Supreme Court and how he plans to use it to steal the election.

"We need nine justices" on the court, Trump said, to deal with what he characterized as "the unsolicited millions of ballots that they're sending."

That was garbled Trump-speak for his hope that, by shoving a right-wing loyalist onto the bench before Nov. 3, he can get the Supreme Court to rule millions of absentee ballots inadmissible and steal the election.

Within the span of a few minutes, Trump managed, despite being barely coherent at the best of times, to encapsulate the entire GOP outlook on our current situation: They're simply too busy crushing our democracy to give a crap about the 200,000 people who have died, the 6.9 million infected or the 13.6 million unemployed.

As Judd Legum noted in his Popular Info newsletter on Wednesday morning, conversations around Trump and Senate Majority Leader Mitch McConnell jamming through a Supreme Court nominee so close to the election have been focused on the hypocrisy of it all. McConnell justified holding a Supreme Court seat open for nearly a year in 2016 by disingenuously claiming to believe it was wrong to seat a justice during an election year, but the second a seat could be filled by a Republican president, he jettisoned his phony concern.

"But beyond the hypocrisy, the Senate's decision is heartless," Legum argues, because they are "choosing to ignore the ongoing pandemic to pursue a narrow ideological agenda."

"Narrow ideological agenda" is, if anything, an understatement. As Trump's comments made clear, the ultimate goal here is to bring about the end of any meaningful kind of democracy, so that Republicans, who control the Senate and the White House even though they lost the popular vote for both, can secure minority rule indefinitely. A right-wing court will make it consistently harder for Democrats to vote and will do its utmost to overturn vacate any legislation Democrats pass if they actually manage to win elections on a drastically tilted playing field.

Trump, of course, doesn't care how many lives are ruined by the pandemic. He has actively made it worse, encouraging people to take risks with their health and interfering with efforts by public health officials to stop the virus from spreading.

But McConnell is just as bad. Even before Justice Ruth Bader Ginsburg died and left her seat on the court open, the majority leader pointedly ignored a coronavirus relief bill passed by the Democratic-controlled House back in May, which was meant to boost the economy and protect the elections.

McConnell clearly had no intention of passing any kind of coronavirus relief, especially if it contained any protection for the democratic systems he wishes to gut. As a political stunt, Senate Republicans offered a "skinny" relief bill, but only to make it look like they were doing something. They put very little effort into even pretending they intended for the bill to reach Trump's desk.

Instead of working with House Democrats on a compromise bill that might actually pass both houses, McConnell has been laser-focused on his one and only goal, which is democracy-proofing the Republican hold on power. Just last week, he jammed through six more federal judicial appointments in two days, gobbling up power like a snake going after a mouse, and completely indifferent to the suffering of the people he was supposedly elected to represent.

To put a cherry on top of this sundae of corruption and disregard for Americans' well-being, one of the cases the Supreme Court is likely to review this fall is yet another attempt by Republicans to strike down the Affordable Care Act.

The legal arguments in the case are idiotic, but it hardly matters. As McConnell understands, the only thing that matters is power. If Trump installs one more judge before the case is argued, then the three remaining liberals plus the one conservative who occasionally cares about legal arguments making sense — Chief Justice John Roberts — will be in the minority. Republicans will finally achieve their goal of finding an end run around democracy to deprive people of health care.

It's worth remembering that the ACA was passed, as political science professor Scott Lemieux has noted, by "a duly elected House majority and Senate supermajority" and was signed by a president who "won a landslide." Republican efforts to repeal the law by normal legislative means have failed "because it's too popular."

The ACA's popularity is the sort of thing that has soured Republicans like McConnell on the concept of democracy. If the people are allowed to to choose their own leaders, they may well choose people who pass policies that improve their lives and level the playing field at least a little between ordinary Americans and the wealthy elite. In other words, if the people keep voting for a better world, Republicans clearly believe those voters have forsaken their right to have a say in governance at all.

No wonder McConnell and Trump are fine with abandoning Americans to the widespread death and destruction of this pandemic. As far as those two and their Republican cronies are concerned, the American people are little more than an inconvenient threat to their power, and all such threats must be quashed.