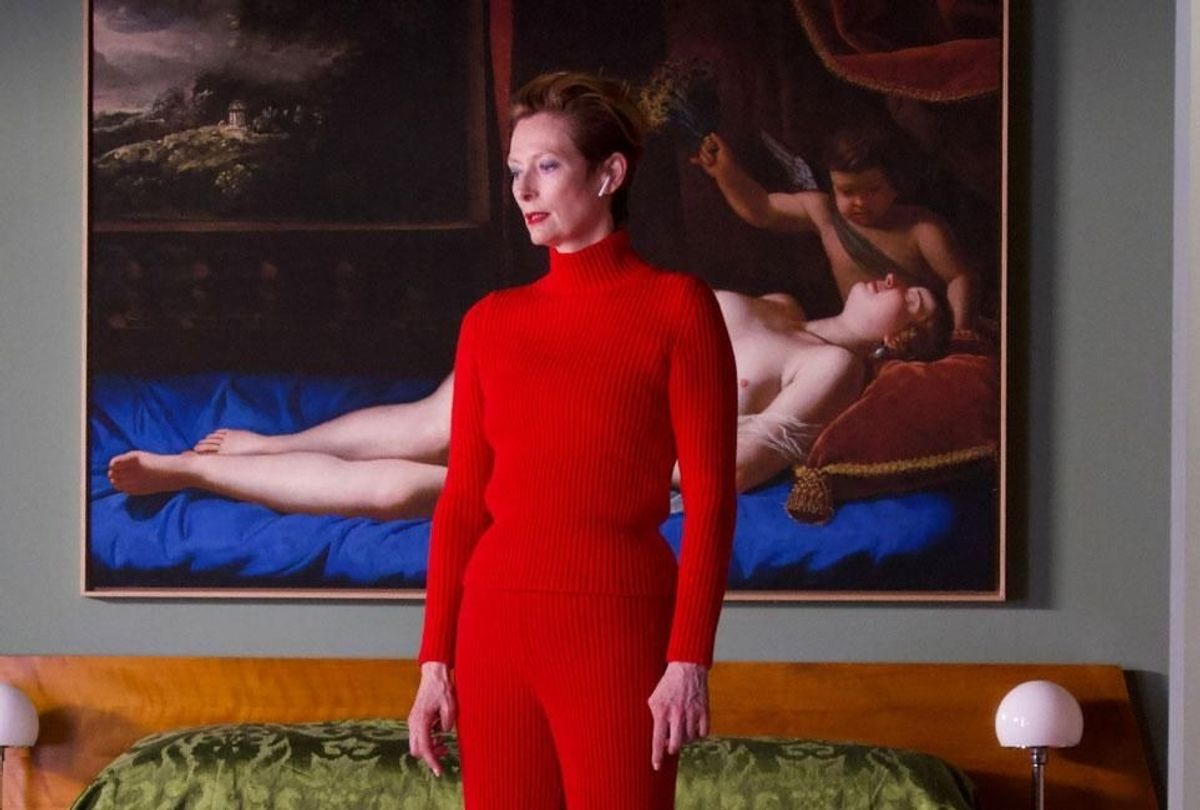 Since its first production in the 1930s, there have been dozens of stage and screen adaptations of Jean Cocteau's one-woman play, "The Human Voice." A well-regarded 2014 version that screened at the Tribeca Film Festival featured a terrific performance by Sophia Loren. In 2018 Rosamund Pike appeared in a version, while that same year, Roger Avary, who co-wrote "Pulp Fiction," directed a short starring Elsa Zylberstein.

Now Pedro Almodóvar has put his patented spin on this classic work, which also marks his first English-language production. For this film, which screened at the New York Film Festival Sept. 24, the director collaborated with the fiery Tilda Swinton and shot this half-hour short in 12 days over the summer, during quarantine.

Despite its origins as a play, "The Human Voice" is well suited to being filmed. Swinton's expressions, from a silent sigh in the opening moments, to her look of shock enhanced by her unkempt, flame-red hair, provide key moments that require a camera to capture in close-up. But Almodóvar also knows when to pull back and give Swinton some breathing room, especially during some of the film's more dramatic moments.

The story — "freely adapted" from the Cocteau play, a credit indicates — is simple. An unnamed woman (Swinton) is bitter about the end of her four-year relationship. She has waited three days for her lover's packed bags to be picked up, and his dog (Dash) to leave. The woman is seen early on in a hardware store purchasing an axe, and Swinton, in a bold blue suit and sporting big dark sunglasses (probably to hide her puffy, cried-out eyes), exhibits a confidence that shows she is not to be messed with.

But she is also masking her vulnerability. Her subsequent voiceover fills in the details of her state of mind as she fusses with some books, including a copy of Alice Munro's "Too Much Happiness," as well as some DVDs, including "Kill Bill," and "Jackie." These props (along with a copy of "A Little Life" placed prominently on her bookshelf) suggest her state of mind perhaps. But so too does a shot of Swinton looking in the mirror and checking her lipstick. When she later takes the axe to her lover's clothing laid out on the bed, it is hard not to flash on "Mommie Dearest," but Swinton (and Almodóvar) do not play this scene for camp. She is a woman enraged and her pain is palpable.

"The Human Voice" shows that Swinton's character is also contemplating suicide, from her looking over her balcony to her ingesting a handful of brightly colored pills. (Under Almodóvar's lens the pills look more like candy than poison). And just as she is lying in bed, trying to end it, the phone rings. It is him, her lover.

The second half of this short has Swinton talking to her ex, and this monologue provides the actress with a real showcase for her singular talents. She appears haunted, ghostlike (especially with her alabaster skin set up by her red hair and dark clothes). When she talks about "madness and melancholy," Swinton exudes it.

But when the woman acknowledges having to resist the impulse of sticking a knife in her lover's chest, it reveals her mercurial nature. How angry and depressed is she? As "The Human Voice" continues, Swinton becomes increasingly more desperate (and more impassioned). The film remains mesmerizing, thanks to Almodóvar's striking production design and Dash's actions.

The woman talks about the risk of the relationship and her suffering, "like an animal," and Almodóvar spins his camera around the actress. When she talks about how the words he said to her are "engraved on her heart," it is an indelible moment and Swinton spews that phrase so it becomes a sucker punch. And when she loses control and gets angry, Swinton's performance really crackles. She is best as a woman possessed.

Almodóvar milks this melodrama for all it is worth, using music and his camerawork to emphasize the heightened emotions. He shoots on a soundstage and features an overhead shot and other scenes to remind viewers of the theatricality of it all. The effect does not dilute the power of the production or Swinton's performance. She is playing along, especially in the last scene when she does something that captures her ex's attention.

It is clear what attracted both Almodóvar and Swinton to collaborate on "The Human Voice." He gravitates to stories of "women on the verge," and Swinton has this ethereal quality to her that makes her fragile and headstrong simultaneously. Both are working at the height of their powers here. Viewers lucky enough to see this short film will have a memorable experience.