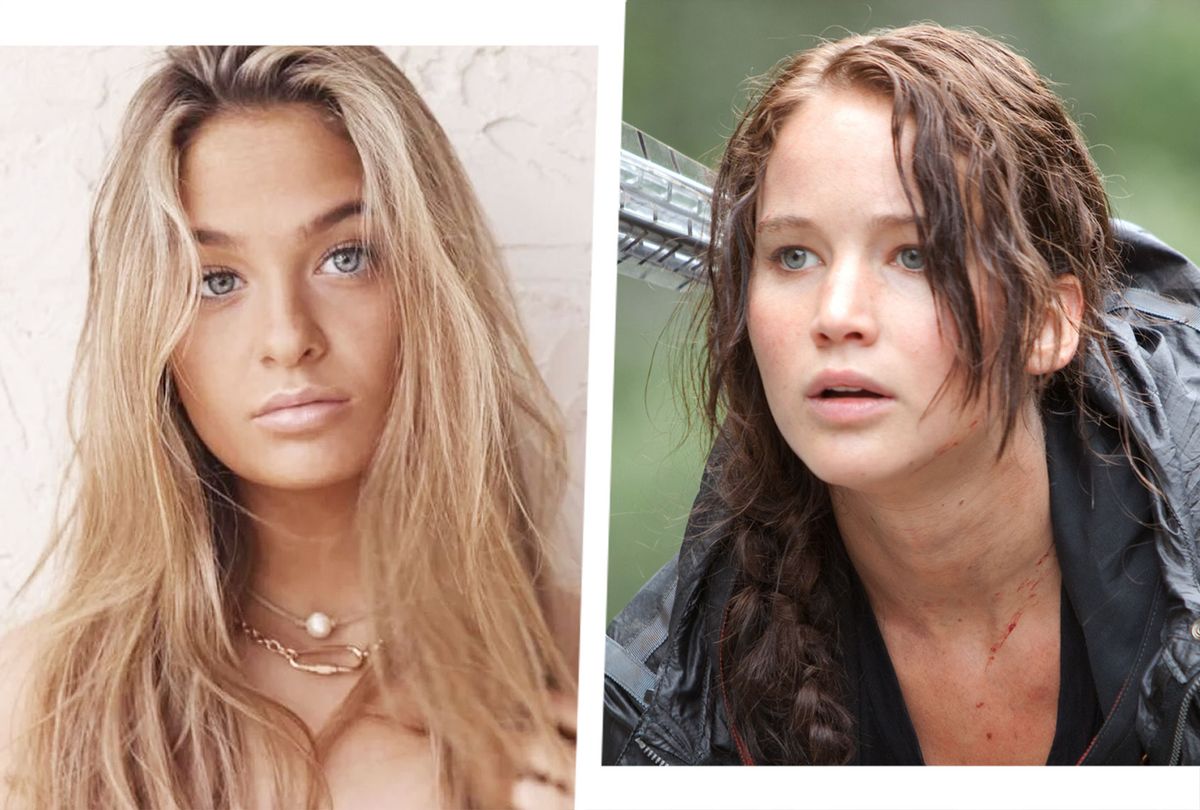 The comparisons between Claudia Conway — the 15-year-old daughter of former senior counselor to the president Kellyanne Conway and The Lincoln Project co-founder George Conway — and "Hunger Games" protagonist Katniss Everdeen began late Monday night after she commented on her TikTok regarding the President Donald Trump's condition.

She wrote, "guys lmao he's not doing 'better,'" and "he is so ridiculous. apparently he is doing badly lol and they are doing what they can to stabilize him." This tantalizing albeit unverified information came just hours after the president was released from Walter Reed Hospital and as his doctors continued to provide conflicting reports about the progression of his recovery.

Conway's comments were quickly screencapped and posted to Twitter, where some users — who were understandably hungry for more information about Trump amid what Salon columnist Heather Digby Parton aptly described as the "absurd Soviet-style propaganda campaign around his illness" — quickly began classifying the teenager as a kind of Gen-Z whistleblower who would lead a revolution against those currently in political power.

"Claudia Conway is as close as we can get to a real life Katniss Everdeen," one wrote, while another tweeted, "Not to be a millennial but we're literally living in a dystopian novel and Claudia Conway is Katniss."

There were comparisons to other YA protagonists like Hermione Granger from "Harry Potter" and Beatrice Prior from "Divergent," and the temptation to make those connections is understandable. This isn't the first time Claudia has garnered massive support for her social media posts. She's gone viral again and again with her short videos joking about Trump's refusal to denounce white supremacy and her "Save Barron" TikToks. She was the one who announced on Friday that her mother had tested positive for COVID-19.

"Update my mom has covid," she wrote on one post, featuring a video of her wearing a mask. "Wear your masks. dont listen to our idiot f**king president piece of s**t. protect yourself and those around you."

In a moment when it seems so many Republicans shy away from candid, public scrutiny and condemnation of the president's actions, especially his response to the novel coronavirus pandemic, there's something momentarily satisfying about watching this young woman defy her parents' — especially her mother's — conservative political views.

But Claudia Conway is not a real-life Katniss Everdeen (at least not in the way people mean in their statements) and, more importantly, she shouldn't have to be. Classifying her as such simultaneously oversimplifies her complicated and allegedly abusive home life, while also wrongly absolving American adults of their part in the ongoing political fight. It also speaks to a larger societal hesitancy to recognize teenage girls as multifaceted, layered individuals who deserve more than for their character to be distilled into 280-character tweets.

In an Aug. 22 tweet, Claudia told followers that she was seeking emancipation from her parents.

"[B]uckle up because this is probably going to be public one way or another, unfortunately," she said. "Welcome to my life."

This was about 24 hours before both Kellyanne and George announced they would be stepping back from their work at the White House and the Lincoln Project, respectively, to "devote more time to family matters."

The next day, Claudia clarified on Twitter that she wasn't seeking emancipation because of her mother's job or political views. "[I]t is because of years of childhood trauma and abuse." This isn't the only time Claudia has publicly alleged that her parents were physically and emotionally abusive; in a now-deleted TikTok video, Claudia said her parents stepping down from their roles was just for show.

"They don't give a s**t,"  she said. "My dad doesn't care about me. He's never cared about me. He probably doesn't even know my middle name, which is really sad, but it's true . . . My dad physically abused me a lot, right here is this very room, and same thing with my mom."

In a recent livestream, she spoke in a type of Gibberish, a language game similar to Pig Latin that sounds incomprehensible to the uninitiated, to tell her followers, "I'm on live right now 'cause I'm scared of my mom."

Claudia hasn't provided proof of her allegations of abuse, but the effects of her tumultuous home life are apparent. In September, she posted a tearful video with the caption: "Nothing feels real. Someone give me tips to stop dissociating."

Within this context, Claudia's videos, even the ones that rightfully reprimand Trump and his staff, are an obvious cry for help, both from capable adults in her life and from the larger American public. Claudia and members of her generation — I'm thinking of other young voices who have been thrust into the political space like David Hogg and Greta Thunberg — shouldn't be the ones pressured to save our country; American adults should leave them a better one.

It struck me when people were classifying Claudia as a 2020 "Hunger Games" character that many neglected to make the connection that Katniss wouldn't have had to be, well, Katniss if the adults in her society hadn't so grossly failed her. She is forced to emerge as a symbol of survival and rebellion, becoming "the girl on fire," while simultaneously being expected to sacrifice her childhood. Instead of having her youth guarded, she spends it protecting those who couldn't or wouldn't do the same for her.

In his September essay for Mel Magazine, Miles Klee wrote about how, when you actually listen to Thunberg and "the Parkland group," you won't necessarily hear how they plan to enact systemic change.

"Instead, they are telling the adults to get their act together, and wondering why it has fallen to the youth to voice any call to virtuous action," Klee wrote. "Claudia Conway now has the duty of convincing people to vote against Trump when she's not old enough to punch a ballot herself."

But instead of actually taking concrete action — phone banking, educating those in your community about mail-in voting, signing up to become a poll worker — it's easier to retweet one of Claudia's videos with the hashtag #ResistanceQueen.

It's also sometimes easier to do that than recognize Claudia, and teenage girls in general, as complex individuals whose personalities, beliefs and values cannot and should not be reduced to a hashtag or saucy headline. Yet the tendency to do so is present all throughout popular culture; I think of Erin Lee Carr's 2019 documentary "I Love You, Now Die" which pushes back against the simplistic media characterizations of Michelle Carter, a 17-year-old girl who was accused of encouraging her boyfriend, Conrad Roy, via text to kill himself.

As I wrote in my review of the documentary, at the time of the court case against Carr, "former HLN commentator Nancy Grace declared: 'She just did this for the attention.' And that is an easy narrative to distill: Carter was an attention-obsessed blackhole of neediness, something many would say categorically about teenage girls. Carter's story just turned dark."

But Carr's documentary digs deeper than that.

Carter had suffered from a severe eating disorder and cut herself; she felt like a social outcast, despite the fact that she was someone who, prior to her case, was a stellar student and community member. With that in mind — and despite looking like an adult — at 17, could Carter really be this manipulative femme-fatale? Or was she a child who, like Roy, needed help, too?

The documentary asserts that the truth is found somewhere in the middle; that Carter is the sum of her parts, experiences and emotions. They're messy, conflicting and ultimately larger than just herself.

The same is likely true in the case of Claudia Conway. She is an outspoken and rebellious voice of dissent against Donald Trump — and she has an unequivocal right to be —but she is also a teenage girl who is clearly facing some level of personal distress because of her unstable home life, and as such deserves a certain amount of privacy to deal with that, despite posting her play-by-play online.

Yes, it's sometimes difficult to look away, and the temptation is obviously there to spotlight her posts as the kind of resistance needed right now — but when that temptation arises, think about what Katniss Everdeen would do in our current political climate, and do it yourself, instead.