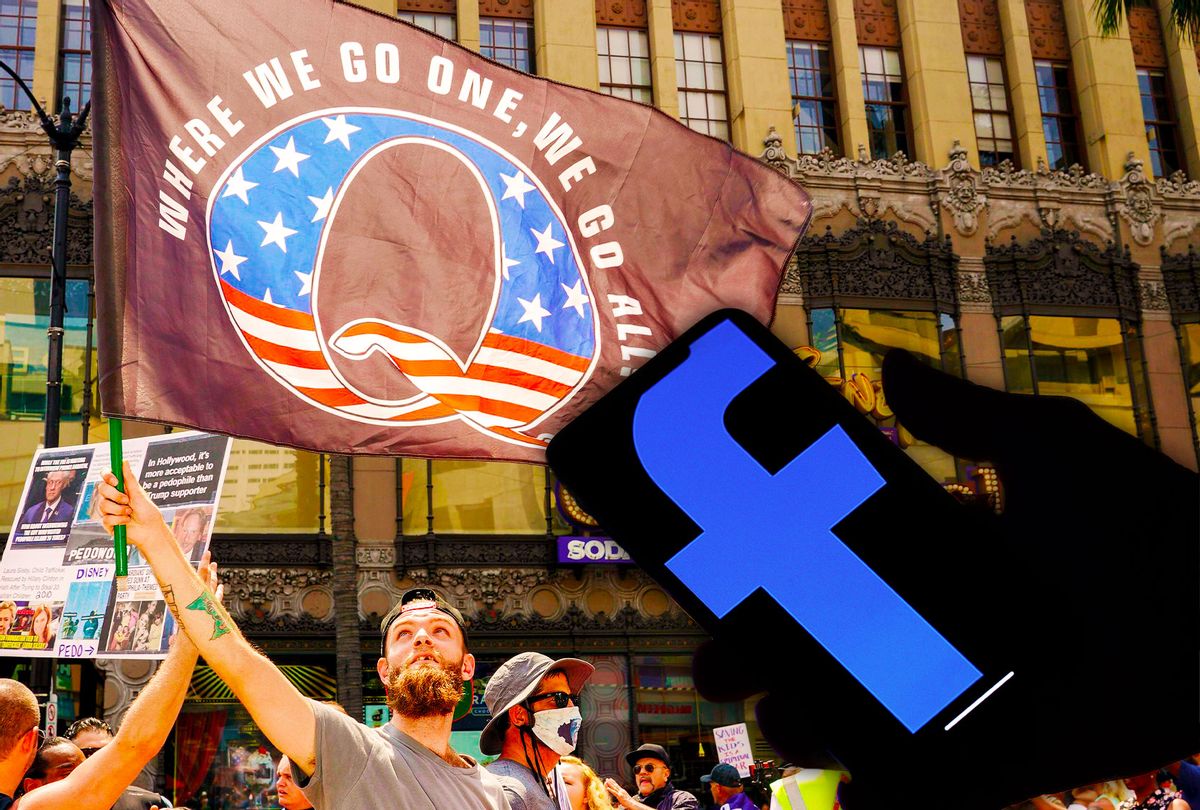 Facebook announced on Tuesday that it is banning QAnon content across its platforms, an action that it characterizes as part of a larger effort to stop "Militarized Social Movements" from recruiting people through their social media sites.

They added, "Pages, Groups and Instagram accounts that represent an identified Militarized Social Movement are already prohibited. And we will continue to disable the profiles of admins who manage Pages and Groups removed for violating this policy, as we began doing in August."

QAnon is a conspiracy theory "based upon the idea that there is a worldwide cabal of Satan-worshiping pedophiles who rule the world, essentially, and they control everything," Travis View, the host of the QAnon Anonymous podcast, told Salon last year. Adherents claim that this cabal has managed to control politicians, Hollywood, and the media, and that "they would have continued ruling the world, were it not for the election of President Donald Trump."

He noted that QAnon views Trump as a hero fighting these malevolent sex criminals — even though the president has his own shared of sexual misconduct and assault allegations, and been accused of unwanted sexual contact by more than two dozen women) — and that soon, a great event will unearth the conspiracy. Adherents also believe that they are privy to these "truths" about the world due to the online posts of an anonymous individual known as "Q," who they perceive as an insider and freedom fighter. QAnon followers have been linked to acts of violence, including a shooting at a  D.C. pizza place which Q followers believed ran a child sex ring out of its basement. (It didn't.)

The movement is considered a domestic terrorism threat, according to an FBI document leaked last year. QAnon's haplessness has actually impeded legitimate efforts to stop child sex trafficking, as Colorado's Human Trafficking Hotline reported last month that it was having trouble doing its job after being flooded with spurious calls by QAnon supporters.

Anti-Defamation League spokesperson Jake Hyman told Salon that QAnon "contains a number of deeply convoluted and all-encompassing conspiracy theories," noting that "several aspects of QAnon lore mirror longstanding anti-Semitic tropes. The belief that a global 'cabal' is involved in rituals of child sacrifice has its roots in the anti-Semitic trope of blood libel, the theory that Jews murder Christian children for ritualistic purposes."

He added, "In addition, QAnon has a deep-seated hatred for George Soros, a name that has become synonymous with perceived Jewish meddling in global affairs. And QAnon's ongoing obsession with a global elite of bankers also has deeply anti-Semitic undertones."

A number of prominent Republicans have been linked to QAnon conspiracy theories. Trump himself has praised the movement, saying that "I don't know much about the movement, other than I understand they like me very much. Which I appreciate."

Republicans have been hesitant to disavow QAnon, lest they lose one fringe wing of their support base. Notorious GOP political strategist Karl Rove called QAnon "lunatics peddling theories that discredit conservatives," while the rest of his party has been more gracious. Eighteen Republican legislators voted against a bipartisan bill earlier this week condemning QAnon, including four from Texas — Reps. Jodey Arrington, Brian Babin, Michael Burgess and Bill Flores. Likewise, A number of Republican congressional candidates have either openly embraced QAnon conspiracy theories or expressed indirect sympathy for the movement's ideas. These include Marjorie Taylor Greene of Georgia, Jo Rae Perkins of Oregon, Theresa Raborn of Illinois, Lauren Boebert of Colorado, Erin Cruz of California, Mike Cargile of California and Lauren Witzke of Delaware.

While many conservatives have taken to social media platforms like Twitter to accuse Facebook of violating QAnon's free speech rights, legal experts agree that the First Amendment only prohibits the government and its leaders from censoring individuals who disagree with them, not private companies. As Rick Hasen, a law professor at the University of California–Irvine, told Salon in May when Trump threatened to retaliate against Twitter for fact-checking two of his tweets, a private company like Facebook and Twitter is "entitled to include or exclude people as it sees fit." (Ironically, any actions undertaken by Trump to punish social media platforms he regards as hostile, legal experts like Hasen and Harvard Law professor Laurence Tribe agreed, would actually violate the First Amendment.)

"Courts have made clear that the First Amendment protects the ability of private companies, including Facebook, to remove content that users post on the company's platform," the Electronic Frontier Foundation's Frank Stanton Fellow Naomi Gilens wrote to Salon. "Facebook's most recent removal decision targets QAnon's dangerous disinformation, and it's easy to see why many people are fine with this decision. But Facebook and other platforms have a long history of removing innocuous or socially beneficial content as well, often without as much public notice and with more harm."

She added, "For that reason, it's essential that Facebook and other platforms voluntarily adopt and abide by transparent content moderation practices found in the Santa Clara Principles, including by establishing clear takedown rules and mechanisms for users to appeal takedown decisions."

While QAnon's beliefs are patently absurd, there are real-life examples of pedophilia enablers in elite circles of American life.

"The interesting thing about QAnon is that there's always at least this tiny hint of truth to it," View told Salon last year, citing pedophile rings led by Catholic clergy and billionaire Jeffrey Epstein as examples. "I've talked about sometimes they're sort of right, maybe in a very broad general sense, but their specific particular claims are always insane and far, far detached from reality. In the case of secret pedophile rings, I mean, you don't have to look very far to see that kind of thing actually happens."

That said, there is no factual basis for any of the claims made by QAnon about Satanic pedophile conspiracies among Democrats, Hollywood, the media, Jews or other groups.