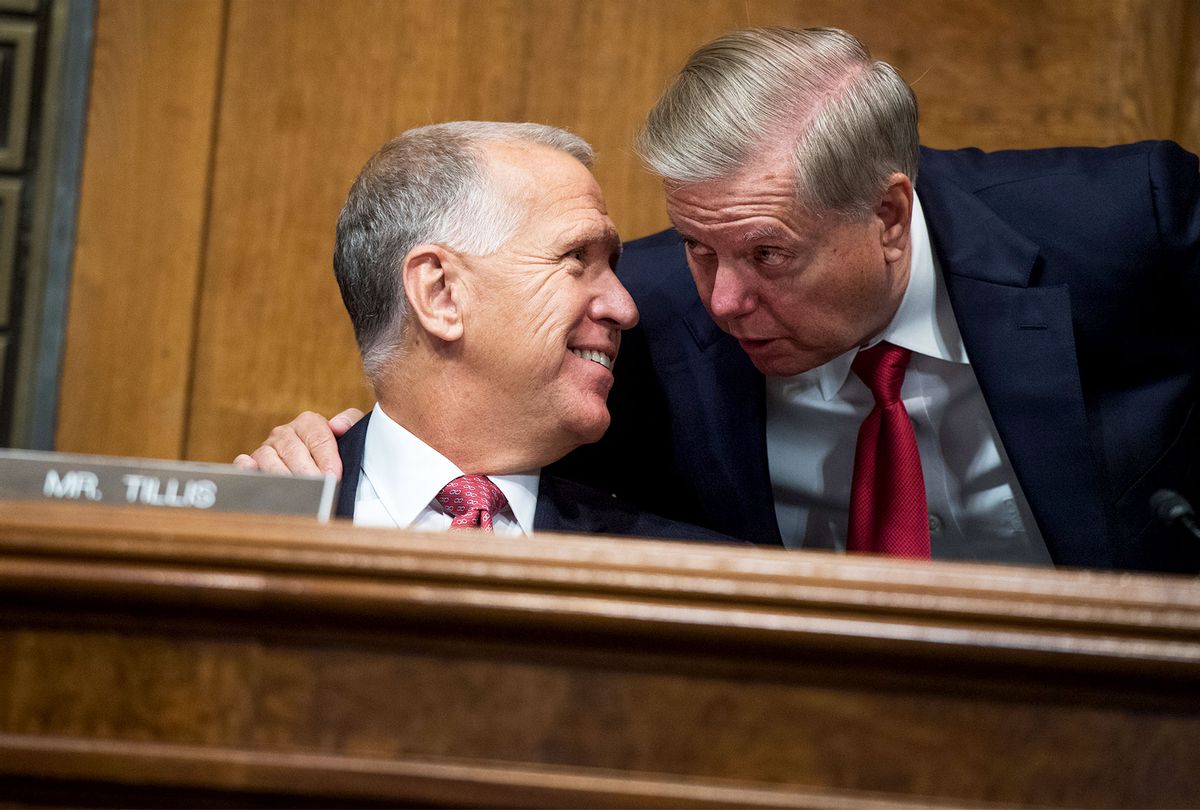 Sens. Lindsey Graham, R-S.C., and Thom Tillis, R-N.C., who are both up for re-election this year, coordinated in an apparent pay-to-play scheme that rolled out for several years regarding the development of a controversial casino in a North Carolina tribal area.

The long-haul effort has involved pressure from a powerful ally to President Trump, as well as tens of thousands of dollars in contributions from industry lobbyists and the casino developer — a riverboat casino mogul who has paid out millions of dollars in fraud cases.

That casino broke ground this July, but still faces hurdles at the state and federal levels, as well as fierce local opposition. With both Republican senators facing unexpectedly tight races, the tangled decade-long dispute plays an obscure but contentious role in their campaigns, and might in the end prove reflective of Tillis' and Graham's changing relationships to the interests of their states.

The Catawba Native American Tribe reservation is located near Rock Hill, in the northern part of South Carolina, a state which does not allow casinos. The tribe, a low-income community, has pushed for years to develop a gaming sector. After meeting with defeat in South Carolina courts, in 2008 it announced plans to build a casino across the border in North Carolina, claiming historical rights to the land.

However, the Eastern Band of Cherokees, a North Carolina tribe, already operated two casinos in the region and pushed back hard against the proposal, which they viewed as an encroachment on their territory. This conflict has driven the story for more than a decade.

To helm the job, the Catawba chose Wallace Cheves, a Trump-backing riverboat casino developer and GOP megadonor who has been indicted for money laundering and forced to settle fraud suits for millions of dollars. Cheves has also been a Graham backer, maxing out to the senator's short-lived 2016 presidential campaign while serving on national and South Carolina finance committees, campaign filings show.

Earlier in Graham's Senate career, he had not been friendly to the Catawba's efforts to gain a gambling foothold in the state, blocking them from opening a bingo hall in 2003 out of fears that it would expand the "Indian gaming problem."

"I am not going to vote for any federal statute until there's a consensus at home as to what is the best course to deal with the Indian gaming problem," the freshman senator told South Carolina outlet The State in 2003. "And in fairness to the Catawbas, the state of South Carolina created this mess," he added. "Things come back to bite you."

Tillis had previously opposed the tribe's proposals as well, joining a bipartisan group of more than 100 North Carolina lawmakers in a 2013 letter pushing back against the Catawba plan for a casino in the state. That year, the Catawba first applied for development rights to the federal Bureau of Indian Affairs; in the previous year, Tillis had accepted $4,000 from the Eastern Band of Cherokee Indians, the Catawba's rival in the dispute.

Around this time, Cheves set his sights on the two Republicans, coordinating a lobbying and donation campaign that appears to have turned both senators around within a few years.

After contributing to Graham's 2016 failed presidential effort, Cheves backed his Senate re-election campaign, maxing out early to his campaign, in 2017, according to campaign filings. The actual election was three years away, but Cheves' goals were more immediate.

In April of that year, Cheves' company, Sky Boat, hired Ballard Partners, the lobbying firm founded by longtime Trump associate Brian Ballard, whose closeness to the president made him one of the most powerful lobbyists in D.C.

Records obtained by ProPublica show that between March and July of that year, Graham had four phone calls and two in-person meetings with Mick Mulvaney, a former South Carolina congressman and at the time the director of the Office of Management and Budget. One call occurred the day before Mulvaney met with Cheves and a Catawba lobbyist. Cheves maxed out to Graham's campaign three months later.

The July meeting attracted press coverage, with the Daily Beast observing that it likely concerned federal approval for the North Carolina casino deal. However, the Catawba lobbyist did not report the meeting in his disclosure forms that year.

But even Ballard's muscle could not push the deal through, and in spring 2018 the Department of the Interior challenged the Catawba's application, forcing them to withdraw.

That summer, Graham called then-Interior Secretary Ryan Zinke, government records show, and in September the Catawba filed a second application. The tribe's lobbying firm contributed $1,500 to Graham's campaign the next month, according to federal filings — two years ahead of the election.

By the following March, Graham had fully come around to Cheves' point of view, introducing legislation to grant the Catawba rights to the casino. Graham's press release announcing the bill made clear that the move was specifically intended to overrule the rejection that the Department of the Interior had handed down the year before.

"The Catawba Nation has been treated unfairly by the federal government, and our legislation rights that wrong," Graham said in the statement. "I hope this legislation will be quickly passed through the Congress and signed into law so we can once and for all bring resolution to this issue."

The release then added: "Four years ago, the Catawbas submitted an application to the Bureau of Indian Affairs seeking the ability to operate a casino. No action has been taken on the application."

Tillis, in the meantime, had also benefited from the riverboat mogul's largesse, taking in more than $82,000 from Sky Boat associates between 2015 and 2019. He cosponsored the bill despite bipartisan opposition from 38 out of 50 North Carolina state senators, led by the state Senate's Republican president pro tem, who still supported the Eastern Band of Cherokees.

In a letter urging the U.S. Senate Indian Affairs Committee to kill the bill, the state lawmakers called the land grab an "unprecedented overreach" that would encroach on Cherokee territory and "deal an economic blow" to a region that depends on the gaming industry and the thousands of jobs it supports.

Despite Graham's insistence that "nobody" objected to the Catawba opening a casino in North Carolina, in reality the proposal met with widespread popular opposition. The Cherokees objected, as did local commenters. Nearly a dozen counties and municipalities passed resolutions opposing the bill, and within one week nearly 1,200 people from the faith community had signed a full-page ad in the Shelby Star, a local North Carolina outlet, urging lawmakers to push back against "an industry that preys on the weakest sectors of society."

Graham, however, pressed on. In May, he took advantage of a short break in a high-profile hearing with Attorney General Bill Barr about the Mueller report to hustle over to present his case to the Indian Affairs Committee. The bill, however, never made it to a vote.

Still, Graham saw a windfall: Ballard Partners employees gave $11,000 to his campaign that July, including $5,000 from Ballard himself, according to federal filings. In October, Cheves gave $5,000 to Graham's leadership PAC.

Then, in December 2019, the Bureau of Indian Affairs released a new assessment about the land on which the proposed casino would be built, and in March of this year, the Department of the Interior finally approved the casino's land trust, agreeing outright with Graham's interpretation of the law and rendering any action in the Senate moot.

In thanking Graham, Tillis and Sen. Richard Burr, R-N.C., Catawba Nation Chief Bill Harris said that a right had been wronged. But the Eastern Band of Cherokees filed suit, claiming that Cheves had applied political pressure.

The casino, named Two Kings, broke ground in July, amid a resurgence of the coronavirus in the Carolinas. This spring an Obama-appointed federal judge denied the Eastern Band of Cherokees' petition to block construction, but the Democrat-led U.S. House of Representatives is considering a bill to ratify the administration's ruling and held a hearing on the issue last month.

Moe Davis, the North Carolina Democrat vying to fill Mark Meadows' former seat in Congress, expressed his opposition to the House bill in a statement this Monday.

"If the deal was so shaky that the South Carolina [supreme] court denied it, why then, should North Carolina green light the same deal?" he wondered.

That question could also be asked of Burr, Tillis and Graham.

Salon reached out to Tillis, Graham, Sky Boat and Ballard Partners for comment and received no immediate response.