What's next for Fox News without its "golden goose"

Trumpism needs Fox News more than Fox needs Trump. But there are around 73 million reasons for Fox to stick with it 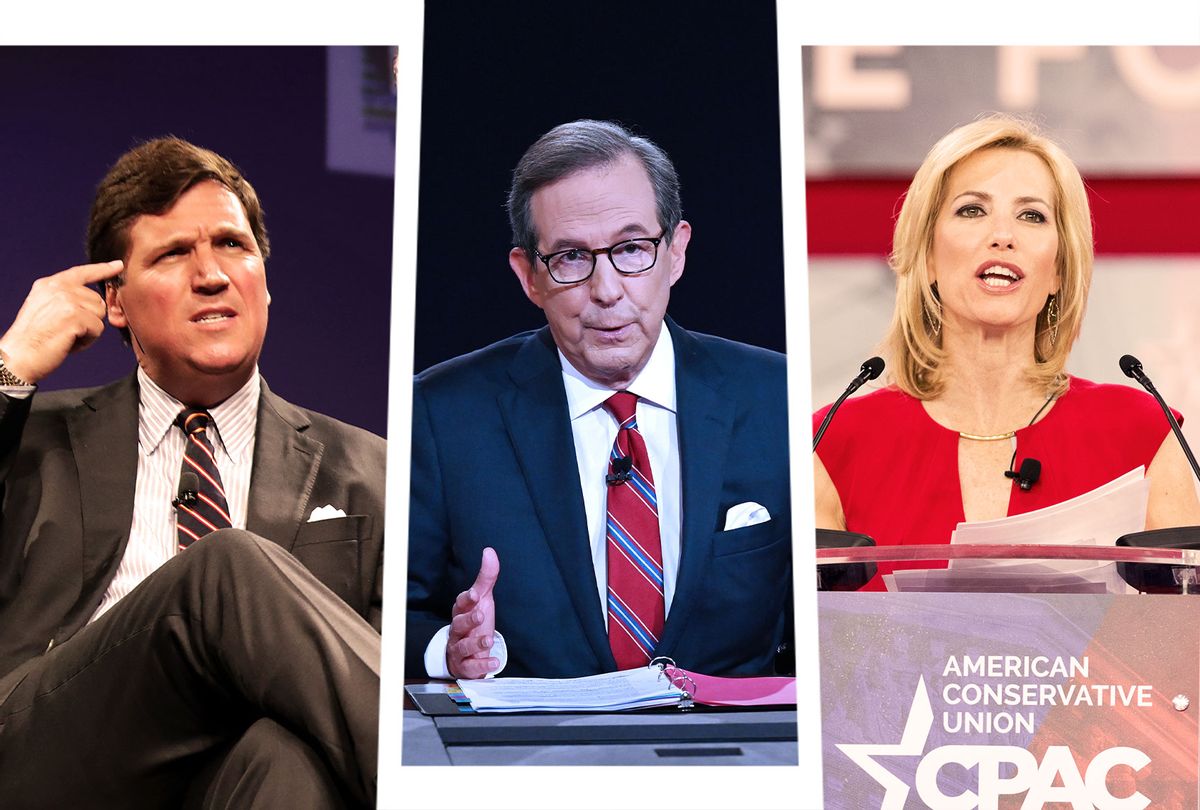 In the recent past a person may have dared to imagine a world with a significantly muted Donald Trump. Nearly 78 million voters pushed to make that a reality, spurred on in no small part by the desire to simply shut him up. That's understandable. The man takes up a lot of mental real estate whether people want him to or adamantly do not.

However, that dream is predicated on the notion that the media organizations serving as Trump's megaphone – Fox News, in the main – would wean themselves off of the endless mutual ego-stroking that joined man and network at the hip over the last five years.

But with around 73 million voters indicating their comfort with another four years of Trump's madness, the one certainty is that while Trump may recede from the center of our lives, Trumpism isn't going anywhere. The difference, at least for Fox, will be in finding and anointing the next star for the right wing to rally around.

On its face, that idea doesn't quite wash. Trump insists on starring in anything that bears his name, including the political movement he birthed. Logically Trumpism cannot exist without the grifter for which it is named.

However, a new era is dawning for Fox and for Trump, and the former at least has been planning for the latter's exit for much longer than he expected. Already the network has signaled a reduced level of allegiance to Trump; that was already happening before Fox called Arizona for President-elect Joe Biden on election night, a move that triggered angry pushback from the White House and the Republican party over its call, as Salon's Igor Derysh reported:

Trump demanded that his team "get that result changed," according to The Washington Post. White House chief of staff Mark Meadows and top aide Hope Hicks, who previously worked as chief communications officer for the parent company of Fox News, repeatedly called the network to "get the call reversed," the outlet reported. Kushner even called Fox News chief Rupert Murdoch to ask for the network to retract its call, The Times revealed.

In the days that followed, Fox's decision desk editors, including chief editor Arnon Miskin, were brought on camera time and again to defend and affirm their decision, which Miskin did with utter calm and poise each time, which must have gotten under Trump's skin like nothing else.

Meanwhile while other news outlets waited for more than a week until the count Miskin insisted would fall in Biden's favor was obvious and inevitable, and on Thursday Arizona officially joined the blue state column.

By that point, Trump had already rage-tweeted his displeasure at the network that was once his most reliable ally. "@FoxNews daytime ratings have completely collapsed. Weekend daytime even WORSE. Very sad to watch this happen, but they forgot what made them successful, what got them there. They forgot the Golden Goose. The biggest difference between the 2016 Election, and 2020, was @FoxNews!"

Trump's blossoming fits of narcissism are as predictable as the sunrise, as are his frequent lies and exaggerations. And while he's not entirely wrong about Fox's daytime ratings compared to its prime time bloviation lineup, to call himself the Golden Goose is pushing it a bit.

Fox has been the dominant cable news channel for most of its 24 years, and its success pre-dates Trump's rise via NBC and "The Apprentice." Sure, he and conservative media forged an unholy alliance long before he was elected president, starting with the odd guest appearance and call-ins to talk shows, particularly when he was shilling his racist birther nonsense to cast doubts on Barack Obama's citizenship.

And over the past five years, Trump became an unofficial staff member at Fox. Trump's White House and Fox were perfectly synchronized until a rift appeared between Fox and Trump over its impeachment coverage, along with reports of conflict between its news side and its pundits over the former's adherence to fact-based reporting (albeit with little pushback) and the latter's amplification of lies for drama's sake. These internal divisions were highlighted when Shepard Smith exited without warning a year ago leaving Chris Wallace, Martha MacCallum and a few other journalists to carry the torch for fact-based reality.

That has not made the network's remaining journalists popular with Trump's faithful because sadly, it's the anger-stoking lies and hyperbole that bring home the bacon for Fox.

Fox News' ratings soared in June, July and August as protests against police brutality topped the headlines in cities around the world. In June and July, Fox News was the highest-rated channel in all of TV prime-time hours, broadcast and cable.

According to Nielsen, in August "Hannity" netted its best monthly ratings ever. Meanwhile in October Carlson had the highest-rated show in cable news leading Fox to its biggest prime time monthly average in its 24-year history.

These gains will fade but certainly not disappear with Trump. Despite his inflated impression of his place in the universe, to Fox he was always a spigot, a pumping station. Fox runs on anger, divisiveness and fear, and it has proven over the years that it can get that from any source that proves popular.

Allying with Trump while he was in the White House made financial sense owing to his pliability, bloated ego, and the fact that he was already a brand. Trump's unchecked stream-of-consciousness ravings fill airtime and entertained his followers, and Hannity and Carlson benefited from riding his coattails.

But while half the country may have written Trump out of the show that is this godawful failure of presidency, Carlson, Hannity and Ingraham will continue doing what they do without a hitch.

Multiple reports have indicated that Fox Corp. CEO Lachlan Murdoch and the network have been preparing for a post-Trump world for a long time, which means they're to sell the scorn that a Biden presidency will yield. Already the election's outcome, which the prime time hosts still have not acknowledged, has already provided some primo absurdist scaremongering. (If you haven't watched Carlson's warning to middle America that liberals want everyone to drink Starbucks, do treat yourself.) Post-inauguration, we may witness Trump appearing on Fox with diminished frequency, but Fox's ability to incite its audience's wrath against the left is eternal. And that is what Trumpism thrives upon.

Rest assured they will find and develop another political star – maybe not an established plug-and-play celebrity like Trump, but one who is camera-ready, marketable and eager to be molded, a la former House Speaker (and current Fox Corporation board member) Paul Ryan. Heck, the network might even find a figure who is charismatic enough to merit his own brand of right-wing ideology and make Trumpism as forgettable as every other conservatism subcategory that rose and fell, luring Newt Gingrich out of the woodpile along the way.

Noise is also circulating that Trump will go on to launch his own network, a rumor that's been floating around since 2016 during his initial presidential campaign. There are many reasons to believe that may happen, and there are even more reasons to surmise that it won't.

The Trump brand is either tarnished or more powerful than ever. One of his rumored post-election plans is to hold rallies and mine his followers' info to directly sell them on a digital streaming network to compete with Fox Nation, according to Axios.

Then again, Trump's debt is reported to be in the hundreds of millions, and his ability to negotiate his way out of it, as he has so many times in the past, is questionable. Don't forget, New York's attorney general and Manhattan's district attorney are building legal cases against Trump. These are not the ideal scenarios under which one launches a TV empire or even attracts funding for one.

In recent months Trump has lashed out at Fox by directing his faithful to One America News Network and Newsmax, smaller cable channels that eagerly shower their audiences with disinformation and conspiracy theory. Their audience numbers are a fraction of Fox's but like every other cable news network they've enjoyed an election ratings bump and are currently go-to sources for fantasies about voter fraud. There was talk earlier this year of Trump allies making a bid to acquire OANN, according to a Wall Street Journal report. But that was in January, and the world and Trump's fortunes have substantially changed since then.

There has also been speculation about Trump launching his own digital presence or even diving into talk radio, both of which may be more financially attainable but require more writing and general discipline than Trump has demonstrated himself to be capable of adopting.

Mark Burnett and his producers may be holding back some damaging outtakes from Trump's time on "The Apprentice," but one factor that's been widely reported is that the man required substantial editing to make him come across as palatable, let alone commanding. Wandering conversation doesn't match well with the rigors of talk radio or even a regular digital series.

All signs point to a landscape with more news channels catering to right wing conservatives, with or without Trump holding court, in some fashion, either a long-winded guest or with his own hour of craziness.

Trump is a mercurial narcissist and as prone to making foes into friends within the same Twitter burst, and this is certainly true as it pertains to Fox. It's too early to surmise how much the man needs the network, and while the network can and will thrive without Trump, the two entities might not be entirely done with each other.

On Friday Geraldo Rivera reported to Fox News' Harris Faulkner about a "wellness call" between him and Trump and updated viewers that Trump, while not quite ready to concede, is more down than out and helpfully shared that he's revving up to run in 2024. As Trump noted in his tweet, he may find that biggest difference between this election and his potential entry into the next is still Fox News.

Among the many lessons the past five years have taught us, however, is that nothing can be counted out when it comes to the soon-to-be-ex-President and his impact on television's reality.