Shepard Smith about his life after Fox News and the war on truth: "All of that noise is destructive"

Smith tells Salon he's looking forward to the day when people can look back and say, "I really was misinformed" 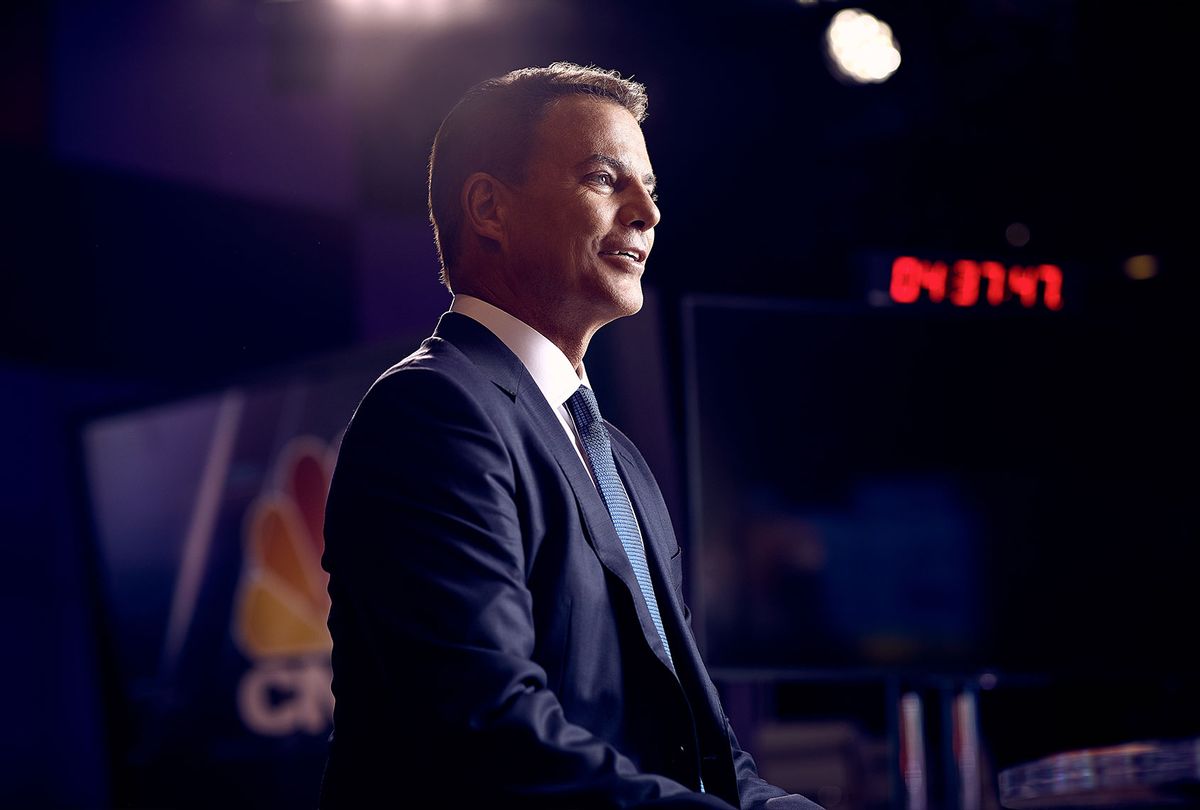 At several points during Salon's recent conversation with CNBC anchor Shepard Smith, he talks about noise. "The noise is just so loud. You've got have some quiet time," he said, referring to the space he carves out for himself during the workday when he retreats to his spartan office, puts his feet up and listens to music to harvest a little peace from the day's cacophony.

This philosophy also guides his approach to "The News with Shepard Smith," and it shows. Each weeknight at 7 p.m. Eastern since the program's Sept. 30 launch, Smith delivers the news of the day, regardless of what it may be, with an old-school broadcast anchor's mellow sobriety. Pressing events of the day top the hour and from there Smith and his correspondents zero in on an assortment of issues that stand to have significant local and regional impact.

"We try to find stories . . . tell them factually and dig into data a lot, and then hear from people about how they feel about the issues through their own personal experiences and how it's affected them," he explained. "And we're not looking for, 'How do you feel about what he said?' or 'How you feel about what she said?' We're trying to just seek the truth, find the truth and tell the truth in context and with perspective."

Having spent 23 years with Fox News, Shepard's new chapter at CNBC intentionally veers away from the argumentative clamor and enraged punditry that has defined cable news in the 21st century. Instead, "The News" offers something so rare and refreshing that people presumed it to be extinct: fact-based reporting, delivered calmly by a plain-spoken anchor uninterested in ginning up arguments.

When developing each day's story slate, Smith says he and his staff adhere to a set of sensible axioms: Get it right. Add in whatever context is important. Explain why the story they're covering matters because of what the consequences will be, if those are known consequences. Then put it into perspective, historical and otherwise.

His show intentionally declines to participate in the cycle of back and forth fueled by false equivalency and both sides-ism.

"We have to ignore the signal and focus on the prize," Smith told Salon. "There's a lot of, 'Look over here!' in life, and there's always been a lot of 'Look over here.' But 'Look over here' gets a lot more juice than it ever did before because of all of these media ecosystems. And it can overtake you."

"This other stuff is going to fade away at some point," he added, referring to the poisonous politics of the last five years and the amplified flurry of lies and hyperbole accompanying it, "and we'll cover the trials and tribulations along with it, we'll cover the uprisings and the demonstrations. And we'll hear from people about how they think about things. But we're on a different road. It's the road less traveled, and I'm enjoying it."

In case you've forgotten, as so many have, that metaphorical road to which he's referring used to be the main road. The road. In the days of broadcast anchor supremacy and CNN's earliest era, the news was a straight-laced enterprise guided by policy, data and expert insight, and what leaders said and did received more space than broad interpretations of the meaning of what they tweet.

When Smith was first rising through the cable news ranks, he distinguished himself during Hurricane Katrina by carefully reporting what he saw on the ground, allowing his emotions to show through at times when the horror overwhelmed him.

I pointed that out to him as an asset. He views the memory differently.

"And you said that just now, you said, 'You let your emotions take over,'" he continued. "They didn't. They won."

In his view, emotions got the best of him because what he was seeing and reporting starkly contradicted the party line that was coming out of the White House and being repeated by other reporters and pundits, including those at Fox News.

In recalling the memory, Smith is passionate as he describes witnessing firsthand the dire suffering in his midst and his shock at hearing officials tell the public that the cavalry had arrived, that people where getting food, medical attention and water when that simply wasn't true.

"I know New Orleans. I'm a child of Mississippi. And I know its greatness and its horrors. There are so many dynamic cities around the world that are both things. And I know the Lower Ninth Ward. I know the poverty and I know how it is systematic and systemic. And I know that certain categories of people have been kept in a place and they don't have a way out and now they're flooded and dying."

He continued, thinking back to what he may have said at the time, "'All of you, maybe you're mistaken, maybe you're misled, but you are telling untruths about what's happening here. And as a result of your untruth, more people are dying.' I couldn't believe it was happening. I couldn't believe that people in a building thousands of miles away were telling me that what I was seeing wasn't true."

"And I'm like, 'Wait, wait, wait, no, no, I'm here. You're reading, but I'm seeing and smelling. I don't need the Associated Press to tell me what's happening here, because I happen to be in the right place.'"

For the better part of the last quarter century, the route Smith has chosen for his program has been all but abandoned on cable. Early on in "The News" run, critics predicted Smith's show would be trounced in ratings. They were right. While October ratings for Fox News and MSNBC surged with the rising excitement and anxiety leading up to the presidential election, the audience for "The News with Shepard Smith" averaged around 272,000 viewers between Sept.30 and Oct. 22, coming in behind its 7 p.m. competitors on MSNBC, CNN and Fox News.

For a bit more perspective on Fox News, both "Hannity" and "Tucker Carlson Tonight" broke the 6 million viewer threshold in October. Carlson's ratings even beat "The Masked Singer" on Fox – that's Fox broadcast, not cable – in broadcasts that aired during the last week of October.

However, let's add a bit of context as well: Carlson's and Sean Hannity's programs are the linchpins supporting Smith's former home, the dominant news network for a decade and a half. CNBC is a small business news network powered by "Shark Tank" and "Jay Leno's Garage," and whatever attention it snagged in the mediasphere tended to be the result of something terrible that Lou Dobbs said.

According to Nielsen ratings data, over the first month that "The News" has aired, it increased the audience by 120% year over year, when "Shark Tank" reruns aired in its timeslot.  And its audience may be small, but it is slowly growing. On Nov. 16 the program enjoyed its highest viewership yet in it's the 25-to-54 target demographic. It's been averaging around 268,000 viewers over the last eight weeks.

A CNBC spokesperson stated that the network is pleased with the progress "The News" has made thus far.

"Not only is CNBC a new entrant in the general news genre, but news viewers are creatures of habit, and it takes a long time to change those habits," the spokesperson shared in an emailed statement, adding that Smith's audience far exceeds that of the last regular news program to air on CNBC in the 7 p.m. ET timeslot, which was "The Kudlow Report" way back in the first quarter of 2014.

And lest viewers be tempted to write off Smith's classic approach to TV news, the cable news field has entered a period of flux. Numbers for "The News" may never approximate Fox News, MSNBC or CNN audience levels, but even their ratings are coming off the historic highs they rode during Donald Trump's presidency.

Much has been reported about disillusioned Fox News viewers migrating over to more far-right leaning and conspiracy theory-driven outlets such as Newsmax and One America News Network, and if that is the case, then surely there must be a commensurate number of viewers seeking out the kind of straight, no chaser delivery that Smith purveys.

Because as many people are realizing, and Smith told me, there's too much noise. "And all of that noise is destructive."

Not all of that destruction he's talking about is figurative. The biggest challenge Smith foresees in the immediate future isn't ratings, which don't trouble him owing to his sense of perspective. He says he's steeling himself for the time leading up to Christmas and into what he describes as "the cold, cold, beginning of 2021, when it's unimaginably sad and horrible everywhere."

"Because I talk to doctors – I talked to Dr. [Scott] Gottlieb, I talked to Dr. [Anthony] Fauci. I talked to a lot of doctors who I don't talk to on the air and they all say the same thing: We're not able to process what's about to happen to us."

This is Smith coming to me, from his personal space – not the on-air figure, but the person who railed at the irresponsible distortion of facts as he watched bodies float by in Katrina's floodwaters. Over Zoom you can see the humanity and concern registering on his face and perhaps hear it catching in his voice a bit. "Death and suffering is horrible in the little places where I've been and experienced them. You know, Columbine, the Oklahoma City Bombing, 9/11, they were all in one place – 9/11 was in a few places and certainly affected everyone. But they cried for us. It didn't happen in their town."

"Now," he  continued, "It's going to be happening every town. And we're going to be so sad, if the doctors are right. And sadness is so destructive."

During those times, he said, the role of "The News" will be to find the heroes in the chaos. We have to give some people who are inspiring, and who doing it in their own little way, to more people in order to inspire them to inspire.

Which is why he stressed his program's dedication to finding the light, not to goose ratings. The vaccines, he said, are a light. So is the culture's renewed focus on women's issues and its nascent efforts to take an anti-racist stance. "Everyone seems to agree that we cannot continue to exist this divided. It will conquer us. We have to find ways to come together. And, you know, as a gay guy, I've always known that if we know get each other better, it's all going to be easier."

Amazingly the CNBC anchor has a hopeful view of what lies ahead for TV news. I feel like eventually we're going to look back and this will be just a little blip in time when people got confused about what was true and what wasn't . . . They got distracted and didn't realize, and, ' I really was misinformed. And I need to go back to a trusted source. And I need to be more careful about how I consume,'" he said.

"But we're in the middle of it and we have to figure out how to get out of it. I don't know what the answer is . . . I don't know how it's all corrected. I don't know what policies and changes need to be made. But I know that we're trying to do it, just ourselves, and we begin by focusing and tuning it out."