Yes, Trump will leave office — but his seditious secession movement isn't going away

Trump is doomed, and ultimately so is his movement. But they may be willing to destroy America on their way down 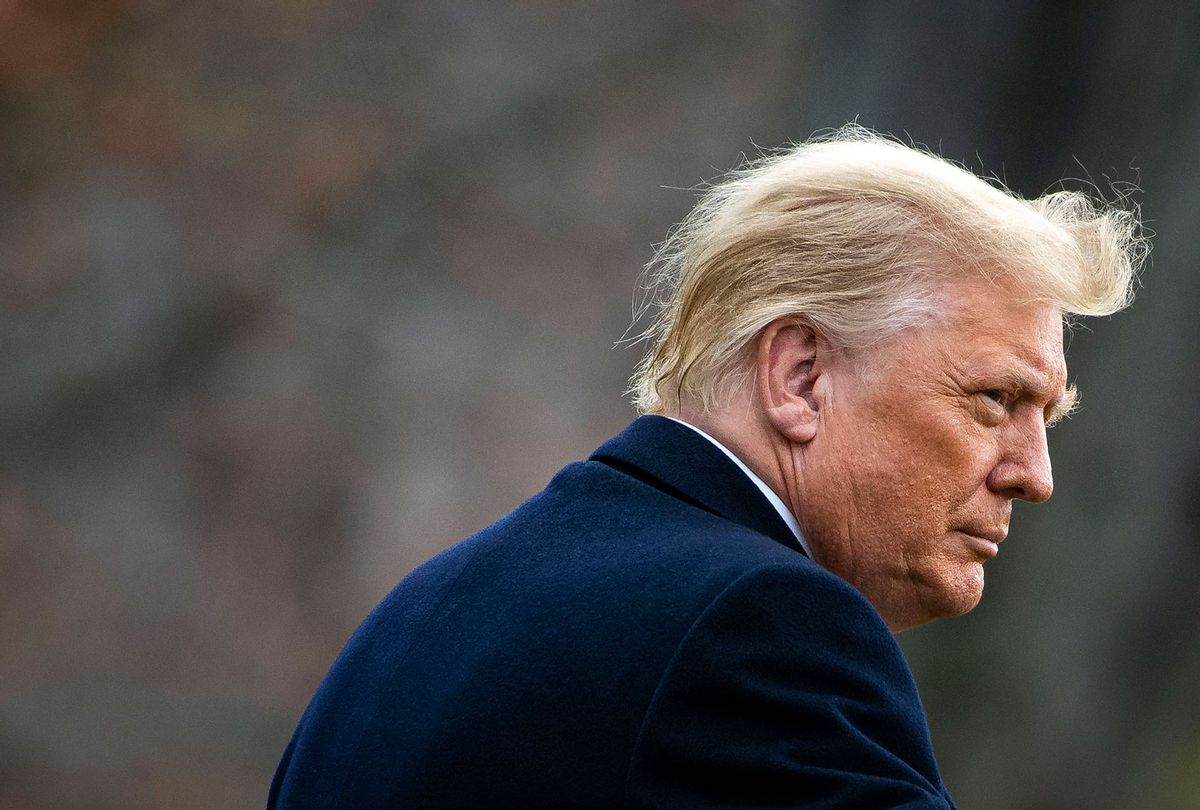 Joe Biden defeated Donald Trump by more than 7 million votes. All 50 states have certified the votes cast in the 2020 election, and as of Monday evening, the members of the Electoral College have cast their ritual votes. On Jan. 6, Congress will count those votes and confirm Biden as president-elect. (Republican dead-enders can delay that process, but they have no power to stop it. On Jan. 20, Joe Biden will take the oath of office as the 46th president of the United States.

How has President Trump responded to these events? By enlisting or intimidating his allies and sycophants into an attempted coup against American democracy.

Trump's plot, so far, has involved dozens of lawsuits demanding that the results of the 2020 election be overturned. These cases have involved false claims of "voter irregularities," "fraud," votes cast after Election Day and assorted other lies and conspiratorial fictions. Trump has also embedded loyalists in key positions throughout the federal government, with the apparent goal of sabotaging Biden's presidency.

Predictably, there have been threats of violence by Trump and his agents against their "enemies" who are "disloyal" because they refuse to collaborate in the plot to nullify the election results of the 2020 election. This stochastic terrorism bore poisoned fruit last Saturday as the "Western chauvinist" Proud Boys and other right-wing thugs descended upon Washington to protest the defeat of their leader.

Trump's unofficial paramilitaries attacked people seemingly at random and sought out street fights with antifascists and other groups. There were four stabbings, leaving one person in critical condition, and more than 30 arrests.

Author and commentator Jared Yates Sexton summarized last weekend's events on Twitter: "Laugh at the Proud Boys and all these fascist street gangs all you want, but if there were ever-present cellphones and cameras in 1920s Germany you can bet the videos would look pretty identical."

In total, Trump and his allies appear to be committing the crimes of sedition or treason against the United States.

The boldest and most desperate gambit in Trump's coup attempt was of course the now-defunct lawsuit by Texas and 17 other states that aimed to have all the votes in Georgia, Michigan, Pennsylvania and Wisconsin nullified. That would have thrown the electoral count into chaos, and presumably ended with either state-appointed electors or the House of Representatives awarding Trump a second term. "The Seditious 18" lawsuit is in many ways unprecedented in American history.

After the Supreme Court declined to hear the case on Friday, the Republican Party of Texas responded with an official threat of secession: "Perhaps law-abiding states should bond together and form a Union of states that will abide by the constitution."

Trump reportedly plans not to attend Biden's inauguration — another departure from long-standing democratic precedent — and has hinted to friends and advisers that he may use that same day to announce his candidacy for the 2024 presidential election. Trump and his movement will also continue to claim that they were "betrayed," and that Joe Biden and the Democrats "stole" the 2020 election.

On Monday, Trump's senior adviser Stephen Miller announced that teams of "Trump electors" from the states where there was alleged fraud will vote to "certify" him as the "rightful" president. (This has apparently happened, at least in Georgia.) Even after repeated defeats in the courts and a conclusive vote by the Electoral College, Trump's legal team claims it will fight on — nominally to overthrow Biden's victory (which is no longer possible) but in reality to provide more fuel for their seditious and treasonous plot going forward.

Today's Republican Party is the country's largest white supremacist and white identity organization. Donald Trump is its leader and champion. Despite all of the polite talk of how Trump's and 74 million votes in the 2020 election are the result of "economic anxiety" or "status anxiety," social scientists have repeatedly shown that racism, racial resentment and white supremacist views are the key determinants driving Donald Trump's support.

Trump's victory in the 2016 presidential election was the product of white backlash against the country's first black president. The 2020 election only confirmed the deep hold that white supremacy has on the Republican Party and much of white America. Instead of rejecting white supremacy on Election Day 2020, 74 million Americans chose to embrace it even more tightly

Today's neo-Confederate Republicans and Trumpists share much in common with their treasonous forefathers who rebelled against the United States and launched a civil war that would kill at least 750,000 people. The Confederates supported the Constitution and the nation's laws when those protected the evil cause of white-on-black chattel slavery, but also claimed they could nullify and ignore any laws that limited their so-called right to enslave Black people.

Trump's Republican Party and his neofascist movement are applying much the same logic to the 2020 election. Votes for Donald Trump are to be counted. Votes for Joe Biden are to be rejected.

The ugly connections between Trump's ongoing coup, America's history of white-on-black slavery, and the treasonous Confederacy go even deeper.

The first sentence in the main narrative of Donald Trump's brief in support of the Texas-led suit to overturn the 2020 election reads: "Our Country is deeply divided in ways that it arguably has not been seen since the election of 1860."

But in reality, it is Trump and his movement who are fomenting the division and other forms of extreme polarization. In the history that Trump is summoning, he is Jefferson Davis, leader of the Confederacy's war to protect and expand the "freedom" of white people to own Black people as human property.

In a Thursday night tweet, columnist and commentator Robert Reich summarized this crisis perfectly: "Trump will not be reelected. But Trump's GOP is now the gravest threat to American democracy and the Constitution since the Civil War."

Trump and the White Right's obsessions with "voter fraud," "vote rigging" and other supposed trickery and machinations are focused on Black and brown people in cities such as Detroit, Atlanta, Milwaukee and Philadelphia. Similar claims were used to overturn Reconstruction and to enforce the white racial terrorism of Jim and Jane Crow, under which black people were not allowed to vote or exercise their other constitutionally-guaranteed human rights without fear of violence and death.

There are other connections between the American slaveocracy and today's Republican Party and "conservative" movement. Both have employed the language of "states' rights" and "liberty" as incoherent, unprincipled talking points. Both then and now, what matters for the White Right and conservative movement is power, of a particular and specific kind: the power of white people over nonwhite people. There is another name for such racialized "democracy": apartheid.

The American fascist movement's seditious and treasonous attacks on democracy will not end after Donald Trump leaves the White House. They will only increase in the years and decades to come. In all, the 2020 election and Trump's coup attempt offer a preview of how Republicans and other American fascists will behave when the people's will in a multiracial democracy is not to their liking.

Their psychological, emotional and financial investment in white supremacy is too great to give up. To maintain it, Republicans and Trumpists are willing to risk destroying the nation. Their desperate allegiance to the lost cause of Donald Trump's presidency is proof.

For all of the efforts by the White Right to sow discord, disunion and fantasies of a second American civil war, that will not occur. Yes, there will be accelerated right-wing political violence. Once Donald Trump is forced from office and the COVID pandemic recedes, we may well see a wave of right-wing terrorist attacks directed against progressives, liberals and the Biden administration.

But as for violence on a massive scale, red states and blue states will not send rival armies to the field. There will not be artillery duels outside Washington. Neo-Confederate "MAGA"-emblazoned fighter planes will not battle the U.S. Air Force over the "battleground" states of Ohio and Pennsylvania. Trump's personal cadre of special operations forces will not sabotage infrastructure or recruit and train underground guerrilla forces in California and New York.

The struggle will be conducted on the field of public policy and manifested through questions of identity and fights over what "We the People" means in 21st-century America.

Ultimately, the coalition of liberals, progressives and other decent Americans that elected Joe Biden are looking to the future, in hopes of making the United States a better, freer and more inclusive nation. Trumpists, Republicans and other right-wing reactionaries want America to slouch backward to the worst and most ignominious parts of its past. Donald Trump's failed coup attempt is like a black hole in space, exerting its gravitational force to pull the country into darkness.