The ceramic Christmas tree is back! Why the retro holiday decoration is everywhere this year

As many people are celebrating the holiday alone, they're decorating with a small dose of nostalgia 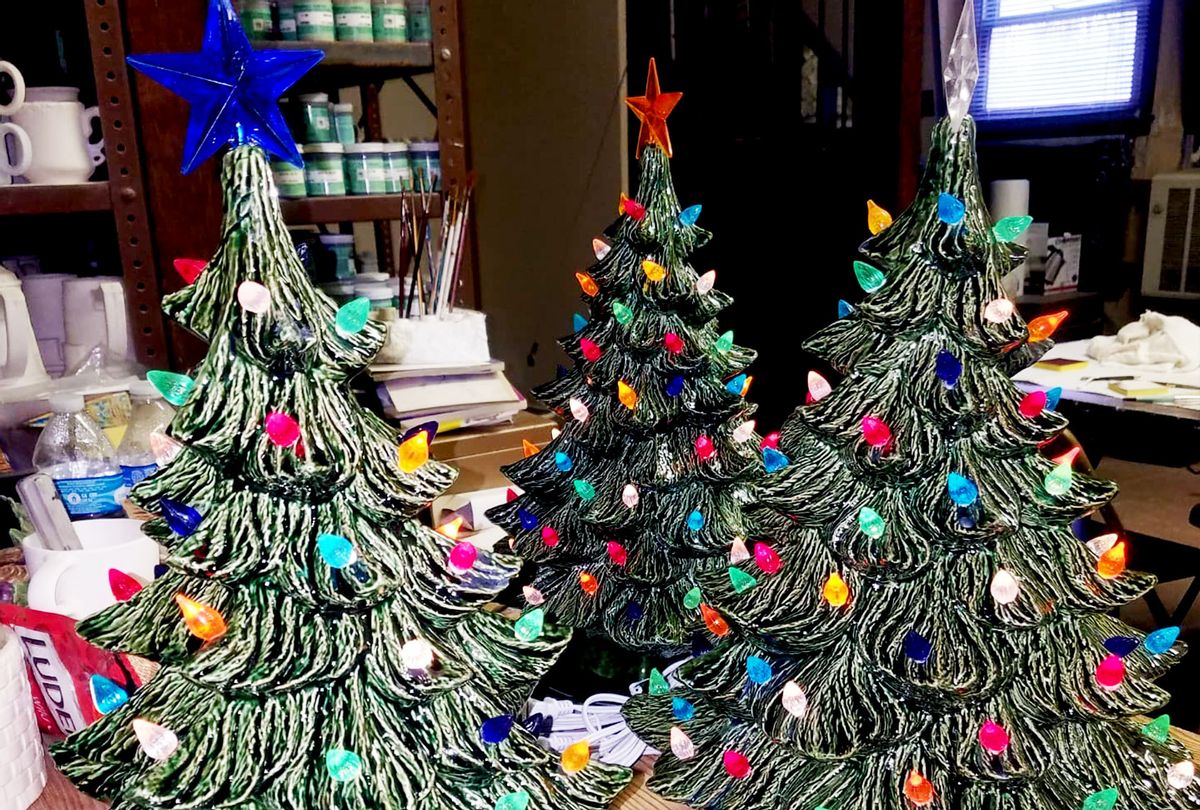 When I called ceramicist Jim Bulleit at his Indiana workshop the week before Christmas, he had a waiting list of 15 people who wanted him to make them tabletop Christmas trees. "Can you hold on a second?" he asked as soon as he picked up. "I'm talking about a tree with a customer right now. She was telling me how she wanted her old one replaced."

This is a really common story, Bulleit said. Ceramics, especially older ones, are fragile and accidents happen when pulling them out of long term storage. This leads to a small, but significant, annual influx of calls to Bulleit from panicked people who realize that they broke their mother's or grandmother's vintage tree right before the holidays.

He can typically help. He has a collection of vintage molds from the '70s and '80s ("The peak years for American ceramics," Bulleit says) and will cumulatively spend hours with customers each year dissecting blurry family photographs and smudged Polaroids to figure out which tree is identical to the one they saw in their childhood home.

This year, Bulleit said, is a little different, however.

"Ceramic trees have been getting popular because they're cool again," he said. "People have been going nuts over them for the past few years."

I'd reached out to Bulleit initially because of just that; I grew up seeing my great-grandmother's ceramic Christmas tree as part of my mother's holiday display. It's about 3 feet tall and a kind of opal white, dotted with little colored plastic bulbs. I assumed that it was just a one-off decoration she'd made at an art studio in her Virginia hometown, but this year, I began to see them everywhere: Instagram pages for my favorite flea markets, an Etsy page promising faithful recreations, Facebook Marketplace, Michaels craft store.

I posted a photo of my great-grandmother's on social media, and dozens of people began responding with images of their own. There was a lot of overlap in the stories, despite the fact that commenters were chiming in from all over North America. Rhode Island, Colorado, Florida, Alabama and Toronto. Many were either that lustrous milky white or a deep forest green (sometimes with snowy tips), all with little sparkling lights. There was a lot of overlap in form, like they all came from one of several molds, and they were all seemingly made by someone — mother, grandmother, aunt — who took a ceramics class.

Bulleit's mother was one of those women.

"In the '60s and '70s, you know, they had garden parties, mahjong parties and, well, they had ceramics parties," he said. "You'd go to someone's house, sit around with the greenware, carve it all up and then they would fire them and come back and paint it. It just got really popular."

The holiday versions of these parties, where attendees could make ceramic Santas, nativity scenes, nutcrackers (and, yes, tabletop trees) were immensely popular, especially because they coincided with the development of commercially cheaper lights and better molds. These came from a few makers, like Atlantic, Newell's and McNees, hence why most of the family heirloom trees look the same, regardless of the family.

These parties and classes remained popular for the rest of the decade, and people like Roxanne Hawn's mother continued to attend.

"My mom's best friend from high school owned a ceramics shop," Hawn, who lives in Golden, Colo., said. "I'm fairly sure that she made the tree as part of a class in her friend's store. I don't see a date on the bottom of the tree itself, but I also have a Santa and a Mrs. Santa Claus, she made, and Santa has 1979 on his foot. She likely made them all at once — or, at the least, a year or two apart."

But then the '80s hit, and as Bulleit said, mimicking the slogan of the now-defunct "Ceramics Magazine," ceramics was no longer "America's most fascinating hobby." By the '90s, a bunch of ceramics shops and mold companies either shut down or consolidated as an influx of ready-to-use ceramics flooded the market. For the next 30 years, ceramic trees entered that awkward outdated phase that so often comes between trendy and vintage.

Now, they've returned to the market and are being received enthusiastically. Prices vary. Some of the vintage trees in pristine condition go for $250 online, while one of Bulleit's bespoke trees starts at $120; he jokes that if folks want something in the $40 to $50 price range, "they should check Cracker Barrel" (I did — they are $49.99 and have been sold out for weeks).

Nicole Slaughter Graham, who lives in Saint Petersburg, Fla., found hers at Home Goods and says that she "instantly started tearing up and had to buy it." It's a pearly white color and looks like her grandmother's.

"This is my first Christmas not seeing my extended, 18-member family because of the pandemic, and that's been really hard for me to deal with," she said. "My grandparents had a huge part in raising me, and decorating their house for Christmas was always one of my favorite parts of the holiday season. Last year, my grandmother sold her house so it was the first year we didn't have Christmas at her house."

She continued: "I always thought that while she's still living, I'd at least be able to see her for Christmas, but the pandemic took that from me so buying the tree didn't even feel like a choice. It was just something I had to do to kind of feel some semblance of normalcy."

Slaughter Graham hits on some of the unique appeal that these decorations hold for consumers this year. For individuals spending Christmas alone, the ceramic trees are a way to honor the holiday without having to splurge on or make space for a traditional tree and ornaments, especially since they come fully decorated.

That was the case for Birmingham-based writer and editor Sarra Sedghi, who found her $50 ceramic tree on Facebook Marketplace.

"I ended up not putting up a Christmas tree this year, so the ceramic tree is nice since I don't have many decorations of my own," she said.

There's a definite nostalgia factor at play as they are reminiscent of simpler holidays. This is the element of the ceramic tree's appeal that perhaps most resonates with Bulleit. He has dozens of stories about people — grizzled motorcycle club members, college kids, newlyweds — who come to him wanting to manufacture a little holiday magic.

"This year, it really reminds them of a time when Christmas wasn't something that had to be avoided," Bulleit said.