Tom Hanks' "News of the World" is a toothless throwback Western 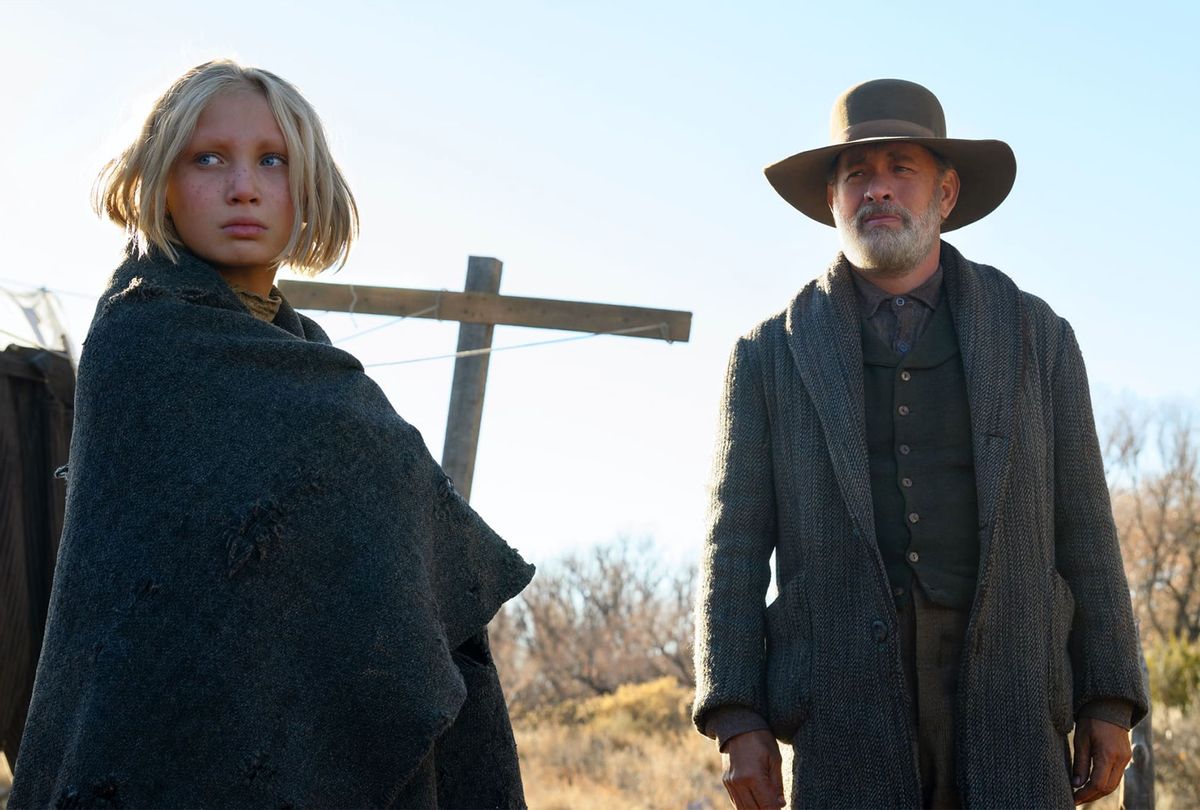 Kidd travels from town to town telling stories from the newspapers to help people escape their troubles. He is a newscaster as performer, and at times he plays a comedian, making folks laugh at the absurdity in the far-flung world. What he is not is a charlatan. Which is a shame; it would be interesting to see some ambiguity or even an agenda with Kidd's work. (The film gets at politics briefly, when he reports about President Grant, who is booed by some feisty Texans).

There isn't a cynical bone in Kidd's righteous body. He may be both physically and emotionally scarred, but Kidd has integrity and nobility. Hanks, who is this generation's Jimmy Stewart, is nothing if not honorable in the role. And the actor's trademark gumption is what makes his performance persuasive but also exhausting.

Kidd's morality is why he responds with compassion when he encounters Johanna (Helena Zengel), an orphaned Kiowa pre-teen, on his way out of Wichita Falls. He plans to deliver her to the authorities, however, upon arrival, he is told the agent he needs to see is away for three months. The principled Kidd decides to make the risky, 400-mile journey to Castroville to return Johanna to her aunt and uncle himself.

"News of the World," therefore, becomes an adventure featuring a grizzled older man and a young incommunicative child. (See "The Midnight Sky," released on Netflix this week, as another example of this genre — or better yet, don't.) Kidd talks to the unresponsive Johanna and he might as well be talking to Wilson the volleyball from "Cast Away." And suspend disbelief as Johanna apparently understands everything Kidd tells her during the film's action sequences.

Predictably, the pair encounter all the road movie genre staples, from wagon ("car") trouble and setbacks to narrow escapes from danger. The best episode is actually one of the earliest. The villainous Almay (Michael Angelo Covino) wants to buy Johanna, who is, of course, not for sale. A chase and shootout soon follow, and Greengrass shows his action set piece chops in this exciting sequence. Set in a rocky, hilly region, Kidd and Johanna are situated above Almay and his men, which gives them an advantage — up to a point. Greengrass wisely avoids using music during the climax of this duel, which ratchets up the tension.

If only the rest of "News of the World" were as compelling. The screenplay, which is written by Greengrass and Luke Davies ("Lion"), and based on the novel by Paulette Giles, feels lazy and uninspired. Kidd and Johanna are both haunted by pasts that become clear in "poignant" scenes that reveal their despair. Kidd evens talks about "moving forward," and "putting the past behind you," and counsels, "Don't look back," which may reveal his character's mindset, but it also guarantees he will confront his demons before the credits roll. Alas, the film never quite generates the emotional resonance in the "closure" scenes that it should.

One reason for the film's lack of feeling is that too much of what happens is telegraphed. In Erath County, Kidd confronts Farley (Thomas Francis Murphy), who might as well be renamed Trump. He wants Kidd to only read the newspaper he published and edited. It reports on what a great man Farley is and uses illustrations to show how bad and dangerous the Mexicans and Native Americans are. What's a decent, educated man like Kidd to do? Tell a captivating story about men who fought back and rouse the masses into action. The ploy works for a spell, but soon Farley has a gun to Kidd's head. There are no surprises about how he is extricated from this near-fatal situation. Greengrass shows the audience exactly who has Kidd's back. The action may not be as important as the message — that people deserved to be treated with respect and dignity — but that message is cudgeled into viewers.

"News of the World" is so relentlessly old-fashioned, the characters might as well be wearing white or black hats to indicate who is good and bad. And it is fine that Greengrass wanted to make a throwback to the westerns of yore — the widescreen vistas are gorgeous — but his film does not have much impact for contemporary viewers. The lack of bloody violence makes it appropriate family fare, but it is hard to imagine many kids sitting through this pablum. Even the girl power messages feel as muted as Johanna. That said, Zengel is an expressive performer. Her frustrations at being forced to wear a dress is a nice, revealing scene.

One of the film's worthier moments features the impressionable John Calley (Fred Hechinger), who briefly gets a ride with Kidd and Johanna on their way out of a town. John wants to know the end of a news story Kidd was telling that had him spellbound the night before. This exchange indicates the importance of reading, but the film doesn't play up this point about education too much. Instead, it emphasizes the value of stories and memories. And this is why "News of the World" is ultimately unsatisfying. It favors earnestness and sentiment at the expense of real knowledge or feeling.

The story here is nothing new, and only moderately interesting.