"Wonder Woman 1984" is "chaotic" and "delightfully cheesy": Reviews of this year's superhero sequel 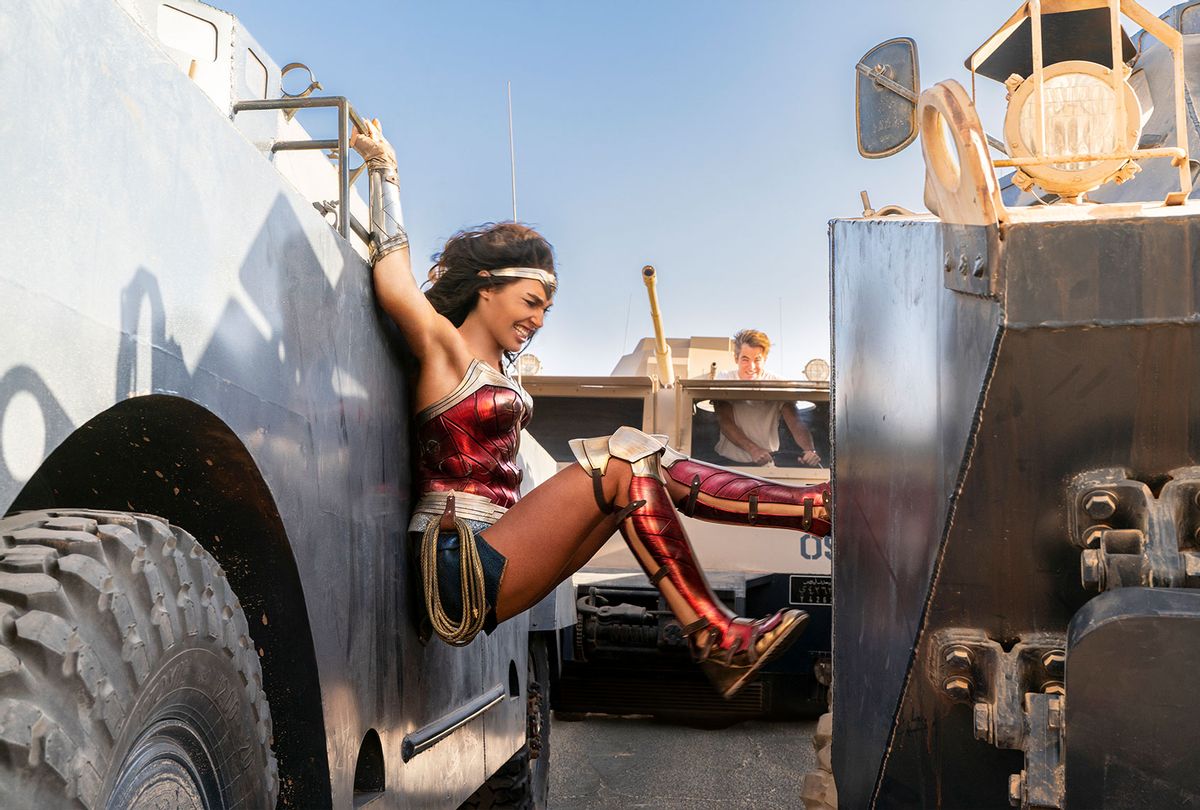 We deserve "Wonder Woman 1984," but does the film deserve us? In a year of upheavals and unprecedented loss, those of us who've survived want – nay, we demand – something that will make us feel good for the holidays. Warner Bros.' "Wonder Woman" sequel could be what we're hoping for: escapism that also empowers, giving us that illusion that not all is futile as long as you're optimistic and just a little bit Gritty.

Warner Bros. sent shockwaves through Hollywood when it revealed that on Christmas Day, "Wonder Woman 1984" would simultaneously hit theaters and HBO Max, a release model the studio is planning for many other highly anticipated tentpole films. If ever there was a time to sign up for a new streaming service, this is it (especially since HBO Max finally came to Roku). Although drive-in movies and other theaters have figured out a way to stay viable during the pandemic, friends and families who want to share the experience safely can pull up a couch.

Will "Wonder Woman 1984" be worth all the hype and successfully kick a wretched 2020 to the curb with shiny red-booted heel? Check out the trailer and what critics are saying in the reviews below:

As "Wonder Woman 1984" began streaming in preview on my living-room screen, I felt something of the pre-Covid thrill of sitting in a theater and being drawn into the 2017 "Wonder Woman," a terrific action spectacular starring Gal Gadot as the Amazon warrior princess Diana. That one included a flashback to Themyscira, the Amazons' island home, where Diana as a child was being trained in martial arts. The sequel, with Ms. Gadot once again in the title role, starts with another flashback to Themyscira, but Diana, nearly into adolescence and played as before by Lilly Aspell, is competing against formidable women in the Amazon Games, a succession of challenges that make the Olympics look like hopscotch. This opening sequence is as elegant and exciting as anyone could have wished for. When it's over, though, the film, opening in theaters and streaming on HBO Max, turns coarse, shrill and chaotic, a kinetic but uncomic concoction that plays like some demented sendup of the Make-A-Wish Foundation

To the tune of only 2 stars, Christy Lemire acknowledges that Gadot is "winning and winsome" but the sequel is "wilder and brasher." She finds the '80s touches particularly annoying:

"Too often, though, the instinct in evoking that period is to wallow in obvious nostalgia —popped collars on pastel Polo shirts, a Centipede game at the arcade, a B. Dalton Bookseller at the brightly-lit, triple-decker mall," she writes. "It feels like it belongs to a movie that actually came out in the '80s."

Playlist: "Wonder Woman 1984" dreams big, but wishes it's something it's not: compelling [review]

With the exception of the "rousing" opening flashback to Diana's youth, Rodrigo Perez appears to find the entire film inane and incoherent. Scoring it a D+, he writes:

"'Wonder Woman 1984' is more than just mere disappointment or letdown from the last film . . . For all its hopes and dreams, 'WW84' has much ambition, but fails to attain the engaging and inspirational greatness it seeks."

Washington Post: "Wonder Woman 1984" is two movies: a fun one, and a bloated, grandiose one

Ann Hornaday notes that Kristen Wiig does a good job:

Here, that honor belongs to Wiig, whose kooky persona is the perfect foil for Gadot's watchful reserve. Even more gratifyingly, filmmaker Patty Jenkins has found a way for Diana's love interest, Steve Trevor, to time-travel back into her life, meaning that Chris Pine has time-traveled back into ours. Gamely throwing himself back into the love-interest role commonly reserved for ingénues, he steals every scene he's in, whether in a Mystery Date-like fashion montage (all hail the fanny pack) or being introduced to such modern-day phenomena as D.C. Metro escalators and the great works of the Hirshhorn.

Unfortunately, by the time the movie passes the 90-minute mark, she writes, "It's as if Jenkins remembers her other deliverables, in the form of special effects, epic global crises and a plotty, ever-more-muddled story line that metastasizes into something much darker and more violent."

Vanity Fair: On a small screen, "Wonder Woman 1984" is a little less wonderful

Richard Lawson points out that the film "colorful and playful in a way not seen elsewhere in the DC Universe," but it's just really "awfully messy" – from Pine's delivery that comes off as "Marvel-esque" and the bloated plot to a stumbling resolution and wasted talent.

"Wiig and Pascal add some nice timbre to the more serious scenes, but the Barbara of it all gets short shrift," he writes. "She disappears for a while and is sorely missed. Game as Pascal is, I think he could have been jettisoned and Wiig moved to the center."

Brian Truitt (3 out of 4 stars) is far more tolerant of the '80s-ness of it all, calling it "rad." Overall, he's there for the performances and views "1984" as the Christmas gift it's meant to be:

Gadot and Pine's chemistry was one of the best aspects of the first "Wonder Woman" and they bring so much life to the new one, as a buoyant Diana introduces fish-out-of-water Steve to fanny packs and parachute pants. Throw in a soaring Hans Zimmer score and together the two lovebirds give the film an exciting, earnest vibe that's the closest recent DC superhero projects have come to Christopher Reeve's original "Superman."

. . . Jenkins is the resident Santa Claus, gifting us this holiday season – even those stuck at home – with an action-packed, heartwarming flick full of grace, goodness and a tank-flipping, whip-smacking, baddie-bashing Gadot.

Mashable: "Wonder Woman 1984" gives the gift of grace and compassion to a desperate world

While Angie Han acknowledges some of the narrative issues, she also recommends that viewers not pay too close attention or expect logic. Instead, she's down for the wackiness of Steve Trevor's '80s journey and especially the authenticity of the emotions between him and Diana.

Overall, it's all about what the film wants to be, which is heartwarming and a balm for this often depressing world:

"There's a pivotal moment when the otherwise busy film slows down long enough for Diana to acknowledge how hard life on Earth can be, how scary and sad it can feel. Watching it in the midst of one of the toughest years in recent memory, it hits like a sigh of relief. Her words aren't enough to fix everything, not in the movie and not in real life, but there's power in the simple acknowledgment of it — in being seen for the miserable creatures we are, and in deciding to love and be loved anyway."

Vox: Wonder Woman 1984 is a better rom-com than superhero movie

Alex Abad-Santos once again acknowledges the muddled nature fo the film –– trying to fit in too much of everyting – but revels in the humanity of this larger-than-life blockbuster.

"The best moments of Jenkins's ambitious and hefty sequel, WW1984, engages with Wonder Woman's very human problem. Diana is a goddess — in appearance, morality, strength, invulnerability — living among mortals, but she is otherwise alone."

Those human problems – her romance with Steve, the rivalry with Barbara – work, but Abad-Santos finds there's just one too many villains.

"The frustrating part of WW1984 is that these two solid storylines are saddled with a third. Looming in the background is the maniacal Maxwell Lord who wants to rule the world and wield unrivaled influence," he writes. "While Pascal is doing great work, lacing American cheesiness into every fiber of his character, I found myself wondering when we'd get back to Diana and Steve, or questioning whether Barbara and Diana would ever be friends again, or asking myself what Diana loves more: being a goddess or being in love? The more time spent on it, the less time WW1984 spends being wondrous."

For every person offended by the '80s excess, there's someone, such as Hoai-Tran Bui, who embraces it for the feel-good goofiness it's meant to be . . . and an antidote to this horrible year.

"The filmmaker digs her heels even further into that promise of cheesy superhero goodness, to the point of it being a potential health hazard," But writes. "But the cartoonishly optimistic charms of 'Wonder Woman 1984' feel like a direct rebuke of the current political and cultural landscape in a way that is unquestionably ham-fisted, but is — as trite as it sounds to repeat this far-too repeated phrase — a much-needed balm for 2020."

"If there ever was a role that played perfectly to Pascal's natural charisma, it's Maxwell Lord. The role requires a lot from Pascal — hamming it up in an over-the-top performance befitting the best '80s villains — who has to play someone simultaneously detestable, charming enough to get people to spill out their deepest wishes to him, and disarmingly sympathetic."

Count Justin Chang among the fans of sincere cheese: "Director Patty Jenkins and her star, Gal Gadot, have mastered the art of cornball conviction. If what you wish for this season is high spirits, earnest emotions and the unironically delightful sight of Chris Pine in a fanny pack, well, consider it granted."

And finally, Kate Erbland raves about the film's bright and overdone ebullient delights:

"Leave it to Jenkins to find a suitable and satisfying workaround in the form of 'Wonder Woman 1984,' the rare superhero sequel that, for better (and sometimes, but rarely) worse, carves its own path and finds something joyous, wacky, and deeply enjoyable as a result. All that neon and all those parachute pants? Just a bonus, as Jenkins and Gadot take their heartfelt heroine back to 1984, finding bombastic new territory for Diana Prince to explore, blessedly outside the confines of her contemporary compatriots."