The raunchy comedy was groundbreaking for the early 2010s & paved the way for "Booksmart," "Pitch Perfect" and more 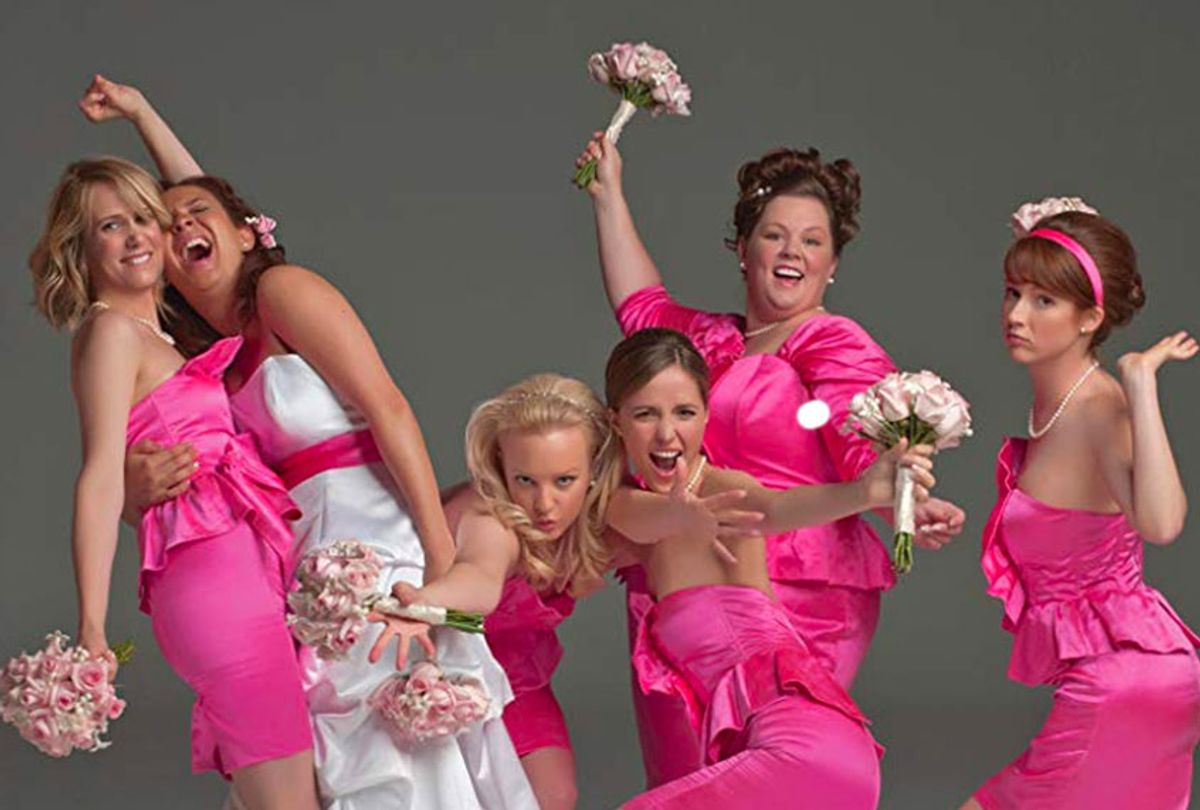 I don’t list it on my curriculum vitae, but I’ve got a PhD in "Bridesmaids." From the earliest buzz about the now classic 2011 comedy, I embedded myself deeply in the "Bridesmaids" beat — in its objective merit as a film, and more significantly, its enduring cultural relevance. Now, as the hours of the 2010s dwindle down, I can safely say that if there’s one  phenomenon of the decade that defined me as much as I defined it, it’s a breezy romp featuring group public diarrhea.

The age-old question "Can women be funny?" still rages hard in many circles. A study out of the University of North Carolina at Greensboro  just this past fall concluded that "On average, men appear to have higher humor production ability than women." But let me take you back to where the the modern debate began. The year was 2007, and Christopher Hitchens resolutely declared no less a prestigious platform than Vanity Fair that no, they cannot. Shots were fired, and although the magazine countered its own argument in a cover story featuring Tina Fey, Amy Poehler, and Sarah Silverman a year later, the notion that a uterus and a funny bone might be mutually exclusive was entrenched in the public imagination.

The stakes felt precariously high, then, from the moment that a female-led comedy – directed by Feig, produced by Judd Apatow and written by Annie Mumolo and "SNL" veteran  Kristen Wiig – was announced. In the months leading up to the "Bridesmaids" release, it felt as if the entire case for the comedic viability of women — women who were at that same moment starring in sitcoms, scene-stealing on "SNL," and selling out their stand-up tours — was riding on the grosses of this one movie. And hey, no pressure, but it was coming out one week after "Thor" and one before "Pirates of the Caribbean: On Stranger Tides," in the same summer season that would deliver a Harry Potter movie, a Transformers movie, a Hangover movie and a Captain America one. The deck was stacked heavily in favor of boy-centric fare; could a bunch of drunk, incontinent females break through their ranks?

The buzz from the test screenings had been positive, even if it did seem the movie was being graded on a curve. Writing in Slash Film in December of 2010, Peter Sciretta reported that preview audiences were raving that "It wasn’t sappy or too girly," and that "This might be the first genuine ‘female’ comedy." Even its creators seemed to regard "Bridesmaids" similarly. "I kept thinking, ‘If I blow this, I’m going to ruin it for these women for years and years,’" Paul Feig told the New York Times a few days before the film’s premiere. He also noted how the movie had been tweaked to allow for an abundance of bodily fluids, saying that it was a case of "occasionally saving the ladies’ movie from itself." He noted, "The original was very funny, but it just was girly in a way that felt expected." And "Bridesmaids" couldn’t be girly. It had to be a cool girl.

By the time that fateful May opening day rolled around, a loose campaign aimed at making sure women threw our dainty chick money in a "Bridesmaids" direction had taken root. Female filmmakers were taking up the cause, imploring, as screenwriter and producer Kirsten Smith put it, "Let's show the planet we are capable of queefing out some major box-office lady-power." Writing in Salon, Rebecca Traister observed that seeing the film had already become "more than a trip to the theater; it's a social responsibility." In Jezebel, Irin Carmon meanwhile assured the other half of the cinematic audience of "The Many Ways To Say Bridesmaids Won't Cut Off Your Balls."

I saw "Bridesmaids" from the balcony of a mobbed preview screening. I remember scanning the crowd for male faces and feeling relieved there were so many in the audience. I watched the film next to a group of 20-something guys who seemed had not been dragged in, begrudgingly, by any female companions. It gave me hope. And when they started laughing right from the first scene — in which Kristen Wiig’s Annie has catastrophically mediocre sex with Jon Hamm — I felt a very specific "WE DARE YOU TO MAKE US LAUGH, LADIES" knot in my shoulder loosen. It was the beginning of a beautiful relationship.

Mine was just one of a deluge of glowing initial reviews for the film. But maybe because its headline was "A triumph for vomit, and feminism," or maybe because I called it "your first black president of female-driven comedies," I found myself that summer of 2011 cast in the role of go-to "Bridesmaids" pundit. I did news shows and public radio, talking about why Women can be funny and how movies about them can make money! Nearly a decade on, when the topic of significant comedies is broached, "Bridesmaids" comes up, and still I get invited to be a talking head somewhere. There is out there an essay on poop in popular discourse, and my "Bridesmaids" review is referenced. Few personal achievements tickle me more than seeing my words in the movie’s Wikipedia entry. "Bridesmaids" is my personal Hot Pockets, the thing I get most cited for, and I love it.

"Bridesmaids" never needed my help, of course. It exceeded all early box office expectations, raking in nearly $25 million opening weekend. It catapulted Melissa McCarthy into an A-list movie star, and launched Rebel Wilson’s Hollywood career. It was nominated for two Academy Awards, an honor still all but unheard of for a comedy. It helped pave the way for other female-led successes both behind and in front of the camera. And yes, it also led to plenty of inevitable "Why do women have to ruin everything?" backlashes. But it’s hard to underestimate the bounce "Bridesmaids" helped give for raunchy comedies like Amy Schumer’s "Trainwreck" and ensemble ones like "Pitch Perfect," as well as women-led sketch and scripted television series and specials. Just earlier this year, director Olivia Wilde called her breakout hit "Booksmart" "a spiritual sequel to ‘Bridesmaids,’" noting, "Because of what you guys created, we can make this movie."

"Bridesmaids" is important simply for existing at all, for coming out a month after Tad Friend observed in The New Yorker that "Male moviegoers would rather prep for a colonoscopy that experience a woman's point of view, particularly if that woman drinks or swears or has a great job or an orgasm." It is important because it made lots of money, was a critical success and made bankable leading ladies out of its cast. Its blockbuster status remains a significant rebuttal to the argument that women are inherently devoid of humor. But it endures because it's funny as hell. It's funny in a way that's rooted and specific to the heart and guts and puke of the female experience, capturing the ferocious, territorial love of women's friendships. And no matter how much time passes, "Bridesmaids" remains fresh, goofy and ready to paaaaaartay.