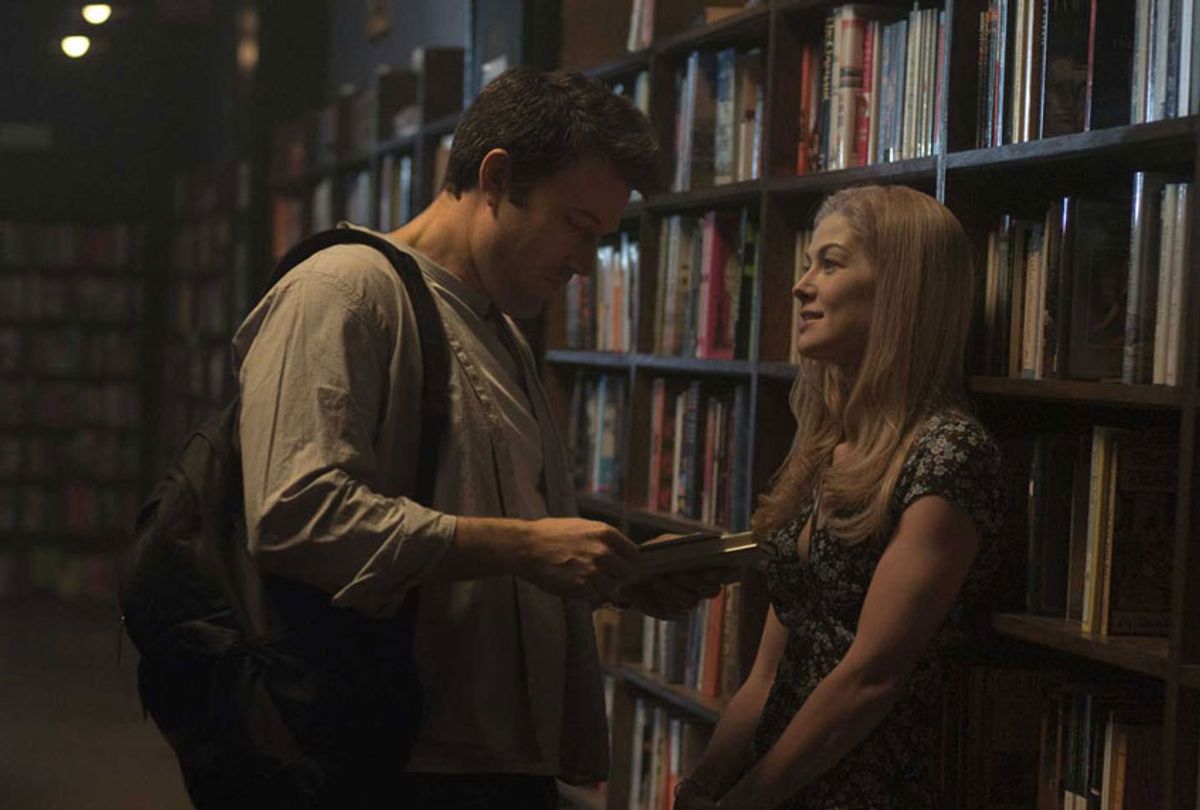 Spoilers ahead for “Gone Girl,” though it came out in 2012 and you should know the twist by now.

“Amazing” Amy Dunne — the psychotic titular protagonist of Gillian Flynn’s zeitgeisty 2012 novel “Gone Girl” — wreaks a lot of damage throughout the course of her ingenious, rage driven warpath. She is, unquestionably, one of modern fiction's most memorable bad guys. But there’s one figure Amy puts in her crosshairs who truly has it coming. She's an antagonist we’ve all known: the Cool Girl.

“Gone Girl,” was Flynn’s third novel, as full of the author's trademark twists, wry wit, and often devastating insight into the female experience as its predecessors "Dark Places" and "Sharp Objects." But this was the one that became a wickedly unsettling hit film (2014) and truly decade-defining bestseller, in no small part because it’s a blackhearted marriage story, a clever mystery — and an exquisite vessel for a real showstopper of a narrative rant.

In both the novel and the film, Amy, having meticulously faked her own violent disappearance, the better to punish her "lazy, lying, cheating, oblivious husband," reflects on the identity she is leaving behind. “Men always say that as the defining compliment, don’t they? She’s a cool girl,” she muses. "Being the Cool Girl means I am a hot, brilliant, funny woman who adores football, poker, dirty jokes, and burping, who plays video games, drinks cheap beer, loves threesomes and anal sex, and jams hot dogs and hamburgers into her mouth like she’s hosting the world’s biggest culinary gang bang while somehow maintaining a size 2, because Cool Girls are above all hot.”

Amy damns both her husband’s gender and her own, reflecting, “Men actually think this girl exists. Maybe they’re fooled because so many women are willing to pretend to be this girl." And after she describes with deadly accuracy the various iterations the Cool Girl can take, all distilled down to “the girl who likes every fucking thing he likes and doesn’t ever complain,” she lands the coup de grace, saying, “How do you know you’re not Cool Girl? Because he says things like: ‘I like strong women.’ If he says that to you, he will at some point fuck someone else. Because 'I like strong women' is code for ‘I hate strong women.’” The Google search results for “scorched earth” should lead directly that passage, with a citation to Joss Whedon's now awkward speech "On Strong Women Characters."

Sorry, did I say “women”? I mean girls. Because in the past decade “women” as we know them, as the subject of books and movies and television shows, ceased to exist, replaced by Girls. New Girls, Girls on trains, Girls with dragon tattoos, Girls. It was a semantic juggernaut, one that served as a bracing reminder of exactly how grown-ass adult females are reflexively judged and viewed and gently diminished, be they adorkable L.A. school teachers or alcoholic English commuters. But none of those other girls are anything like Amy Dunne.

Amy, the once cool, now gone girl, exists in the cultural canon not just as a fascinating villain or a cautionary meditation on female rage. No, she’s also a magnificent, scary answer song. Because while the low-key neg has been with us always, the past decade raised it to the status of surefire hit single generator. “Gone Girl” arrived smack in the middle of a spate of wildly popular singles about guys who just can’t help boasting about how they could do better, but they love you and your low esteem anyway. “You’re insecure,” enthuses One Direction, and “when you smile at the ground it ain't hard to tell, you don't know you're beautiful.” And guess what? That’s what makes you beautiful!

“Beautiful girls all over the world, I could be chasing but my time would be wasted,” croons Bruno Mars, who in a different song continues, “I know when I compliment her she won't believe me, and it's so, it's so sad to think that she don't see what I see.” “Even when you're crying you're beautiful too,” John Legend, who is married to an actual Sports Illustrated swimsuit model, heroically states, while Andy Grammar brags, “Nah, honey, I’m good. I could have another but I probably should not.” Probably.

Wow thanks, guys, Amy seems to sing back in response. And thanks to my husband Nick, living the dream and banging the hot chick from the “Blurred Lines” video! You know, that song about a self described “nice guy” who insists that a “good girl” “must wanna get nasty”? Also, how about I just run away and set him up as a wife-abusing murderer? You good with that, honey? Long before she soaks her kitchen in her own blood, Amy has cracked the code of the implicit contract in that particular form of masculine devotion. That's why her master plan involves putting on a few pounds and coloring her blonde hair dark. It’s easier to disappear when you’re already becoming invisible.

Amy is a singularly shocking figure, a liar who can destroy men with her tearful hints and accusations of physical and sexual abuse. That's why one of the most chilling scenes of both the book and film is of Amy coolly violating herself in service of her next savage move. A fair amount of the criticism of “Gone Girl,” unsurprisingly then, has centered on its “girl who cried rape” elements and its potential damage to The Cause. But “Gone Girl” isn’t a revenge fantasy; you’re not supposed to feel good that Amy ultimately gets away with murder and orchestrates a pregnancy with the man she has ruined. Instead, she leaves you with the lingering, unsteady dread that a woman who has been playing a part her entire life has found a new role, one the world values even more than a NASCAR-loving porn star. In the end, Amy has obliterated the Cool Girl, and she’s ready to weaponize her next disguise: devoted wife and mother.