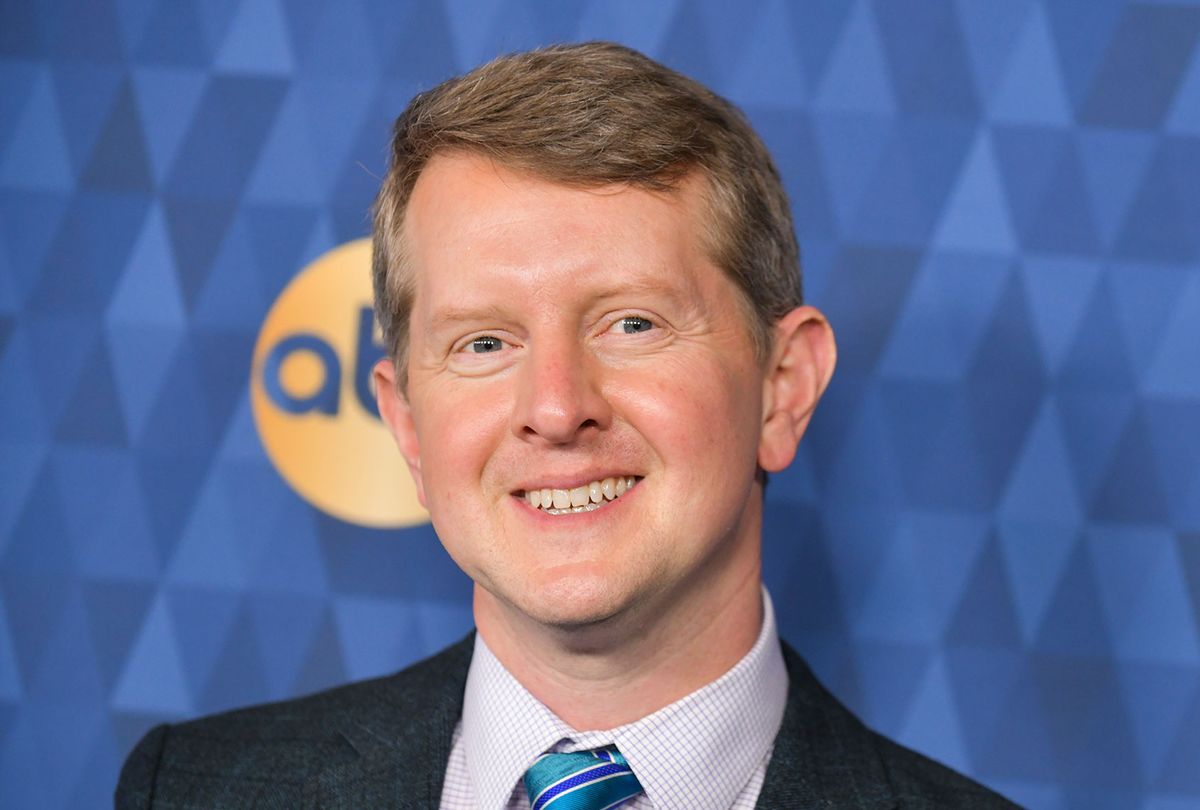 This article has been updated to include John Roderick's apology.

Ken Jennings,  who holds the all-time record for most consecutive "Jeopardy!" games won, has stumbled from one Twitter controversy into another after coming to the defense of a man that the internet dubbed "Bean Dad."

One tweet from 2014 read, "Nothing sadder than a hot person in a wheelchair," while another in 2015 included a joke about a terminally ill "Star Wars" fan who got to watch "The Force Awakens" before he died. Jennings had previously refused to delete these tweets, saying that they "could lead to smart replies and even advocacy. Deleting them felt like whitewashing a mistake."

But this time, ostensibly in preparation for his hosting gig beginning Jan. 11, Jennings issued a full apology on Twitter, writing: "Sometimes I said dumb things in a dumb way and I want to apologize to people who were (rightfully!) offended. It wasn't my intention to hurt anyone, but that doesn't matter: I screwed up, and I'm truly sorry."

Fast-forward to this past New Year's weekend, and Jennings is under fire again for tweeting in support of his "Omnibus" podcast co-host John Roderick, amid a viral Twitter scandal. It's a wild, unwieldy story, so here's what you need to know:

John Roderick is the lead singer and guitarist of the band The Long Winters and was formerly a touring member of the band Harvey Danger. He also hosts or co-hosts several podcasts, including "Roderick On The Line," "Road Work" and Jennings' "Omnibus."

On Sunday, Roderick tweeted in a thread that his 9-year-old daughter came to him and said she was hungry. He told her to make some beans and when she asked how, he said, "Open a can and put it in a pot." Then, he realized that she had never had to use a can opener before.

Roderick tells her to "study the parts, study the can, figure out what the can opener inventor was thinking when they tried to solve this problem." Time passes and his daughter grows increasingly frustrated because, as Roderick put it, "spatial orientation, process visualization and order of operation are not things she . . . intuits."

He then told her, "Sweetheart, neither of us will eat another bite today until we get into this can of beans," before returning to a jigsaw puzzle he'd been poking at all day. Finally, after "six hours on and off," and Roderick's daughter eventually telling her father she hates him, she successfully removes the lid. They feast on beans, and Roderick takes to Twitter to breathlessly recount what he obviously viewed as his greatest teaching moment as an "Apocalypse Dad."

The story went viral, as did the phrases "Bean Dad," "she is nine" and "SIX HOURS." While some parents did view Roderick's tale as a triumph for instilling perseverance or innovation, much of the internet . . . did not agree. Film critic and author Lindsay Ellis succinctly summarized it like this:

"Only because I can't stop thinking about Bean Dad even tho I hope to forget about him tomorrow," Ellis said. "But it's pretty obvious to me that he kind of deep down knew he was being s**tty to his daughter, and that's why he took it to Twitter to reframe his s**ttiness as a Teachable Moment."

While Twitter users went back and forth regarding whether Roderick was emotionally abusive, his self-aggrandizing thread definitely paints him as a sort of Wes Anderson-style "Bad Dad." I could easily envision a deleted scene from "The Royal Tenenbaums" where Richie and Chas recall in hushed tones the time that Royal locked them in the kitchen with a can opener and a can of baked beans and wouldn't let the family eat until they figured out how to use it. Not necessarily abusive, but definitely intended to belittle in effort to make a point or put on a show.

Roderick even seemed to briefly cop to this. "I know I'm infuriating," he wrote on Twitter. "I know this is parenting theatre in some ways." But then he began to lash out at people who questioned him on Twitter  — though not before some of his old racist, anti-semitic and ableist tweets were resurfaced.

"Every time I use a word like 'gay' or 'retarded' some gay retard reminds me those words are hurtful," he wrote in 2011. He also wrote things like,"Jews ruin everybody's fun," joked openly about rape and said, "The founders intended USA as white homeland."

Roderick quickly deleted his account and, as journalist Helen Kennedy put it, "Bean Dad's daughter toughed out his can opener experiment longer than he withstood Twitter criticism. One assumes he has learned much from being tested this way."

His account was reactivated Monday afternoon, though many of the tweets in question have since been deleted.

Where does Ken Jennings come in?

Alright, so remember how Jennings and Roderick co-host a podcast together? Jennings decided to come to the aid of Roderick amid the online kerfuffle, initially just commenting on his parenting style; this was just as Roderick's problematic tweets were making the rounds.

"If this reassures anyone, I personally know John to be (a) a loving and attentive dad who (b) tells heightened-for-effect stories about his own irascibility on like ten podcasts a week," Jennings tweeted. "This site is so dumb."

But then several Twitter users asked Jennings how he felt about his co-hosts racist and anti-semitic views. He responded, "If we're word-searching through old tweets now, it's pretty easy to find what he actually thinks about anti-Semitism. On our show he's always the pro-Israel one!"

As many commenters pointed out, being "pro-Israel" doesn't necessarily mean that someone is free from anti-Semitism. Regardless, Jennings doubled-down, writing, "There's no axis where any anti-Semitic screenshot represents any actual opinion I've ever heard from him."

Keep in mind, this is fresh off of Jenning's own recent Twitter scandal involving insensitive comments, and many "Jeopardy!" fans responded in disappointment, one stating, "Alex Trebek would have had a stronger stance on racism and bigotry."

This reignited interest in the Change.org petition endorsing LeVar Burton as the next host of the game show, which was, as Salon's Melanie McFarland reported, created to "show Sony Pictures Entertainment Inc. and producers Mike Richards and Harry Friedman just how much love the public has for Burton." It has almost 112,000 signatures as of this article's writing.

Wait, then why are people also talking about "My Brother, My Brother and Me"?

One of the other branches of this story is that Roderick's song, "(It's a) Departure" by John Roderick and The Long Winters, served as the theme music for the popular podcast "My Brother, My Brother and Me," a weekly comedic advice podcast by brothers Justin, Travis, and Griffin McElroy.

Running parallel to the Jennings drama was a call from the podcast's fans for the hosts to change the theme song. Unlike Jennings, however, the brothers didn't hesitate.

"For reasons we're sure you're all aware of, we're getting started finding new music for MBMBaM. You'll probably hear a filler theme song on this week's episode," the hosts wrote on Twitter. "We're not sure what'll come after that, honestly, but we hope you'll stick around to find out."

They continued: "We appreciate John letting us use one of his songs as the theme for MBMBaM for nearly a decade, but his response to today's situation is emblematic of a pattern of behavior that is antithetical to the energy we try to bring to the things we do, and so it's time for us to move on."

On Jan. 4, the McElroy brothers released their first podcast since the transition. The new theme song? A remixed version of the "Rugrats" theme song with lyrics sung by Griffin McElroy.

"Here come the McElroys, we've got jokes and bits," he sings. "We're gonna give advice and do funny skits. Laughter, it is in store, come inside and see. It's time to start, it's 'My Brother, My Brother and Me.'"

As of Monday afternoon, Roderick is back on Twitter. His bio briefly read "Bean Dad 2021" before being deleted and his first tweet now reads, "Somebody had to start the year off with a bang!"

Update: On Tuesday morning, Roderick posted a lengthy public apology on his website. He said that the story about his daughter was "poorly told," saying that he framed the story with him playing the character of "a**hole dad because that's my comedic persona and my fans and friends know it's 'a bit.'"

"My story about my daughter and the can of beans was poorly told," Roderick wrote. "I didn't share how much laughing we were doing, how we had a bowl of pistachios between us all day as we worked on the problem, or that we'd both had a full breakfast together a few hours before."

He continued: "What I didn't understand when posting that story, was that a lot of the language I used reminded people very viscerally of abuse they'd experienced at the hand of a parent. The idea that I would withhold food from her, or force her to solve a puzzle while she cried, or bind her to the task for hours without a break all were images of child abuse that affected many people very deeply."

Roderick also apologized for his use of racist, homophobic, bigoted and anti-Semitic slurs on Twitter, saying that he ironically "repurposed" the terms, "flipping them to mock racism, sexism, homophobia, and bigotry." He says that in the early part of the decade, friends helped him realize that was wrong.

"Yesterday those old tweets resurfaced and hurt a lot of people anew," Roderick wrote. "People who are close to me, people in my community who couldn't square those words with the person they know me to be. And people who don't know me, going about their business yesterday, had to see those awful slurs and feel the hurt those words inspire. They had to suffer this asshole #BeanDad casually demeaning them and their friends. I deeply regret having ever used those words."

Roderick wrote that he plans on taking a hiatus from his public life to let some of the lessons he's learned sink in.