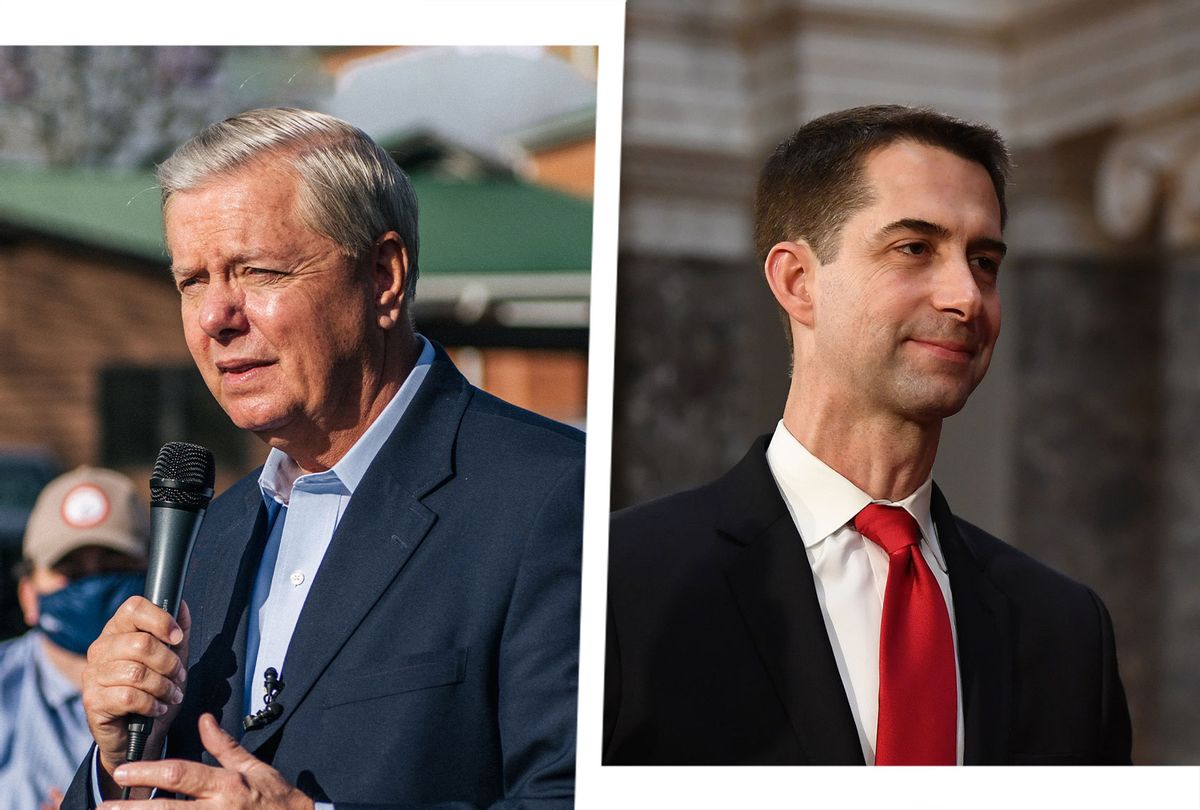 Two of President Donald Trump's closest Senate allies pushed back on their colleagues' futile plans to challenge the Electoral College results on Wednesday, quickly drawing attacks from the president's supporters.

Sen. Josh Hawley, R-Mo., Sen. Ted Cruz, R-Texas, and nearly a dozen other Senate Republicans have announced over the past week that they will join a growing number of House Republicans in challenging the results in certain contested states, even though Trump and his allies have found no evidence of widespread voter fraud or irregularities. The effort has no realistic chance of overturning President-elect Joe Biden's win in any state since the process is largely a formality and such objections will merely delay the certification of the votes for several hours. The scheme has drawn widespread condemnation as an "attempted coup" aimed at disenfranchising millions of legal voters.

In a statement, Cruz demanded the appointment of a commission to audit the election results in certain states and said that he and other Republicans would "reject the electors from disputed states as not 'regularly given' and 'lawfully certified' ... unless and until that emergency 10-day audit is completed."

Sen. Lindsey Graham, R-S.C., a staunch Trump ally who has echoed the president's baseless fraud claims in numerous interviews, dismissed the effort as a stunt.

"Proposing a commission at this late date — which has zero chance of becoming reality — is not effectively fighting for President Trump. It appears to be more of a political dodge than an effective remedy," Graham said on Twitter.

Graham said the group of Republican objectors would have to clear a "high bar" and "need to provide proof of the charges they are making" along with "clear and convincing evidence" that the "failure to take corrective action in addressing election fraud changed the outcome of these states' votes and ultimately the outcome of the election."

Former Attorney General Bill Barr, who left his post just before Christmas, has already said that the Justice Department has found no evidence of widespread fraud or irregularities that could have affected the election result. Trump and his allies have not offered anything approaching such any evidence in dozens of legal challenges. But Graham's tweets quickly drew scorn from Trump supporters uninterested in anything but blind loyalty.

"So you used MAGA to get re-elected and now do this? Disgusting," said Errol Webber, a former Republican candidate who refused to concede his California congressional race, making baseless fraud allegations. He lost by more than 72 points to Rep. Karen Bass, D-Calif.

Sen. Tom Cotton, R-Ark., another close Trump ally who has baselessly questioned the election outcome, said he would not join Wednesday's effort and warned that it "would essentially end presidential elections and place that power in the hands of whichever party controls Congress."

Though Cotton will not join the effort, he echoed Trump's unfounded fraud allegations and said he supported creating a commission to "study" the election results.

"Objecting to certified electoral votes won't give him a second term," he said. "It will only embolden those Democrats who want to erode further our system of constitutional government."

Despite explaining, correctly, that the Wednesday stunt would do nothing to affect the outcome of the election, Cotton was widely criticized by Trump's ardent backers for what they described as a "betrayal." Conservative pundits like former Fox News contributors Todd Starnes and Michelle Malkin demanded a primary challenge to Cotton in response to his decision.

Cotton, like Hawley, has long been rumored as a potential candidate for the 2024 Republican presidential nomination, although Trump appears to have his eye set on running again in four years. Cotton's decision surprised many on the right, though his comments were far less critical of the effort than those from more moderate Republican senators like Mitt Romney of Utah, Pat Toomey of Pennsylvania, Ben Sasse of Nebraska and Lisa Murkowski of Alaska.

Romney called the effort an "egregious ploy" that "dangerously threatens our Democratic Republic." Toomey said that the objectors "fail to acknowledge" that their fraud claims have been discredited in "courtrooms across America." Murkowski agreed that courts "have found nothing to warrant overturning the results."

"Let's be clear what is happening here: We have a bunch of ambitious politicians who think there's a quick way to tap into the president's populist base without doing any real, long-term damage," Sasse said in a statement. "But they're wrong — and this issue is bigger than anyone's personal ambitions. Adults don't point a loaded gun at the heart of legitimate self-government."

Former House Speaker Paul Ryan said over the weekend that  this effort to overturn the 2020 election would "strike at the foundation of our republic." Rep. Liz Cheney, R-Wyo., the No. 3 Republican in the House, wrote in a memo to her GOP colleagues that the challenge would "set an exceptionally dangerous precedent."

Some conservatives have pushed back as well. Reps. Thomas Massie, R-Ky., Chip Roy, R-Texas, Ken Buck, R-Colo., and four others said in a statement that the "narrow" role of Congress is only to "count the electors submitted by the states, not to determine which electors the states should have sent."

Ultimately, this effort has less to do with changing the outcome of the election than serving as a loyalty test for MAGA world, a chance to position potential 2024 Republican candidates, and a chance to raise large sums of money after the election.

"All that is being done is certain members of Congress, the president, and 'thought leaders' on Twitter are getting retweets, getting followers, and raising money on this scam," Rep. Adam Kinzinger, R-Ill., said last week. "It is a scam and it is going to disappoint the people that believe this election was stolen, that think this is an opportunity to change it."