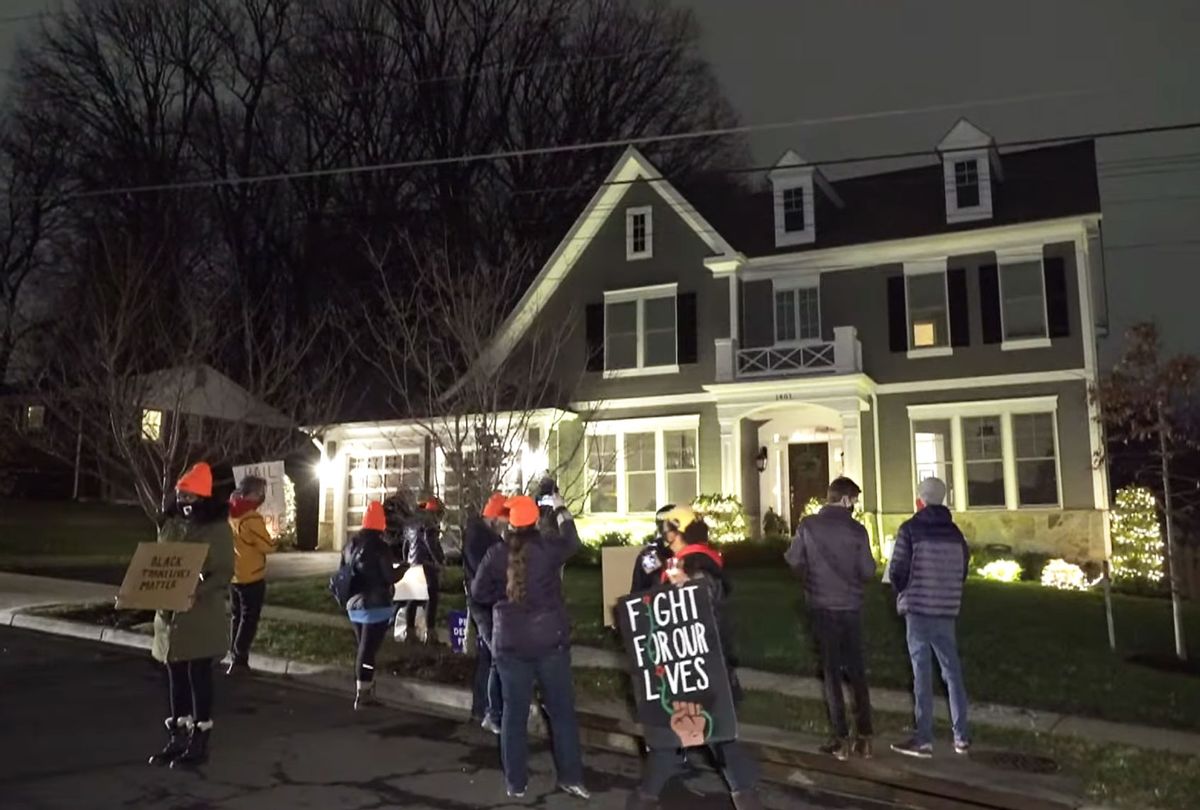 ShutDownDC holds a vigil outside the home of Senator Hawley in Vienna, Virginia. (Youtube/alchymediatv)
--

Sen. Josh Hawley, R-Mo., claimed that "antifa scumbags" threatened his family at their Washington, D.C.-area home after video showed what appeared to be a peaceful protest.

A group of about 15 people held candles and signs saying "Protect Democracy" in protest of Hawley's plan to object to the Electoral College results during a joint session of Congress on Wednesday, according to the Washington Post. But the freshman senator who has been rumored as a potential 2024 presidential candidate accused the group of "leftwing violence."

"Tonight while I was in Missouri, Antifa scumbags came to our place in DC and threatened my wife and newborn daughter, who can't travel," he tweeted. "They screamed threats, vandalized, and tried to pound open our door."

Protest organizers said there was no vandalism and the crowd did not knock on the door, though they did ring the bell when they left a copy of the Constitution on the doorstep.

"This was not threatening behavior," Patrick Young, a ShutDownDC organizer, told the Post. "This is people engaging in democracy and engaging in civil discourse. … This was a pretty tame and peaceful visit to his house."

The group published a 50-minute video on YouTube showing that protesters used a bullhorn to condemn Hawley's bid to reject millions of legal votes. The video shows police officers who responded to the scene asking protesters to lower their volume before standing by as the demonstration continued. At one point, a woman who appeared to be Hawley's wife opened the door to complain about the noise and said she has "neighbors and a baby." Minutes later, three people not involved in the protest entered the home. A neighbor was also seen on the video complaining that the group was "disturbing" the neighborhood.

The crowd chanted "Hawley, Hawley, shame on you" and "Due diligence has been done, Biden-Harris have won."

Young told the Post that police were present for most of the demonstration and that the group only protested at the home because the coronavirus pandemic has shuttered many lawmakers' offices.

Young told the outlet that he "proudly identifies as an anti-fascist" but criticized Hawley's comments.

"That's not the level of discourse that we would want to engage in," he said. "But if he wants to call us scumbags, then we're happy to call him a snowflake."

The incident was reminiscent of protests outside of the homes of Democratic mayors in Seattle, Portland, Chicago and St. Louis, as well as the homes Republican Senate leader Mitch McConnell, R-Ky., and Postmaster General Louis DeJoy. Michigan's secretary of state said her home was surrounded by armed pro-Trump protesters last month who baselessly alleged fraud in the election.

Hawley's tweet prompted handwringing from conservatives who claim concern over antifa violence. President Trump has repeatedly blamed the anti-fascist movement for violence surrounding the summer's anti-police racism protests in Washington, but court documents have showed no evidence of members' involvement. An avowed antifa supporter, Michael Reinoehl, was involved in a fatal shooting in one Portland protest, and was later shot dead under suspicious circumstances by officers deputized as U.S. marshals.

On the other hand, authorities have linked multiple shootings and terror plots this summer to the far-right "Boogaloo Bois" movement. More recently, Proud Boys leader Enrique Tarrio was arrested by Washington, D.C., police and charged with burning a Black Lives Matter banner during a pro-Trump post-election protest last month as the group terrorized multiple Black churches in the nation's capital.

Members of the Proud Boys are expected to descend on Washington again on Wednesday as Hawley and Sen. Ted Cruz, R-Texas, lead a group of about a dozen Republican senators in objecting to the Electoral College votes, even though their scheme has no chance of overturning the election result. Tarrio bragged that his followers members will be dressed in all black, like some antifa supporters.

Young told the Post that Hawley's efforts had also "encouraged the Trump supporters" who are expected to march in Washington, "in turn putting the city at risk of violent clashes and hurting trust in the democratic process."

The group described the demonstration at Hawley's home as a "vigil," which Hawley disputed.

"Now 'vigil' means screaming threats through bullhorns, vandalizing property, pounding on the doors of homes and terrorizing innocent people and children," he wrote.

Many left-wing Twitter users pointed to the recording of the demonstration to accuse Hawley of lying about the incident.

"Just as there is documented evidence that Joe Biden handily won the election, there is video evidence that Hawley is lying about a peaceful gathering," wrote activist Matt Browner Hamlin.

"There's footage of the protest and believe it or not, it doesn't show a bunch of pitchfork toting antifas carrying lit torches while ready to molotov the whole house," wrote reporter Daniel Moritz-Rabson. "What's the overlap of lawmakers who decry cancel culture or liberal censorship and lawmakers who lose their minds when people hold a targeted protest?"