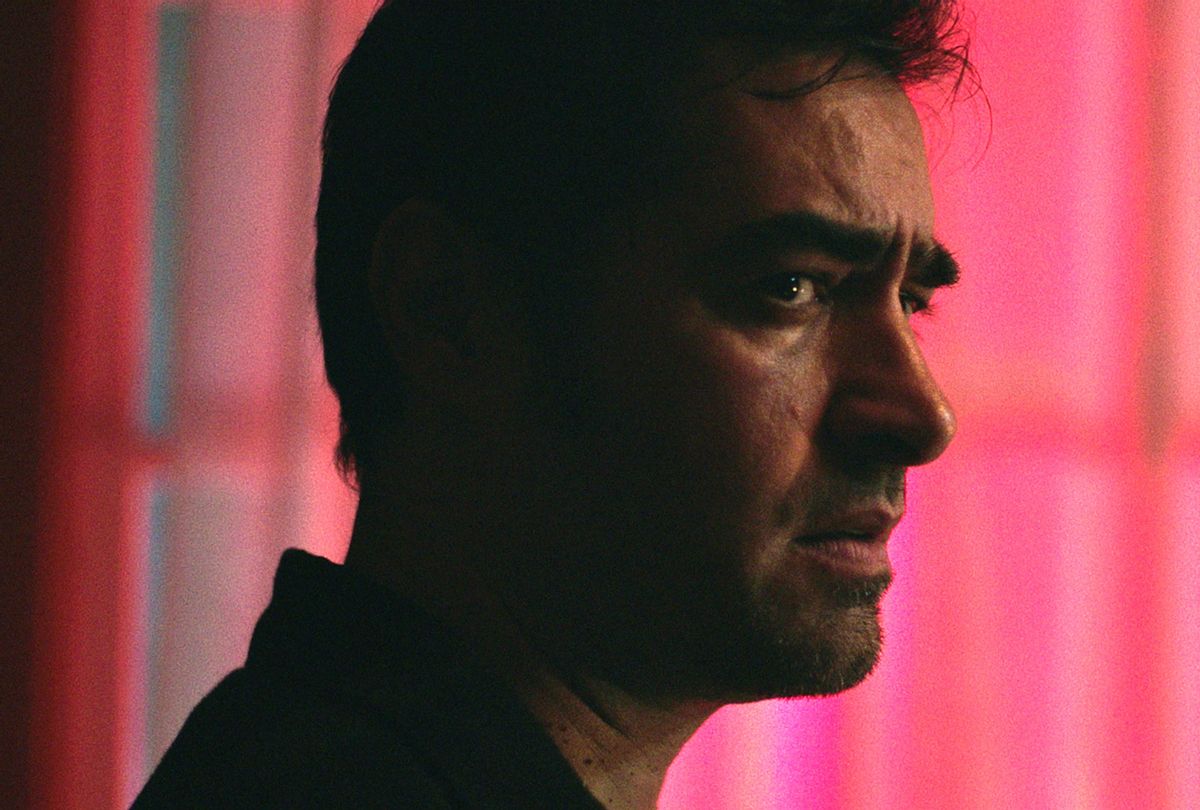 In the eerie Iranian horror film, "The Night," Babak (Shahab Hosseini, of "The Salesman"), Neda (Niousha Jafarian) and their baby, Shabnam (Leah Oganyan) check into the Hotel Normandie to get some rest. But that soon proves impossible — and not just because Babak is suffering from a throbbing toothache. The guests are repeatedly disturbed by knocks at their door, noises from above, and even a voice whispering "Mommy." When Babak takes Shabham to get some milk, he experiences an unusual encounter that unsettles him. Is Babak dreaming this nightmare, which gets worse — the family is unable to leave the hotel — as the night goes on?

Director and co-writer Kourosh Ahari creates a moody little psychological thriller, complete with jump scares, a mysterious black cat, a dripping faucet, a strange tattoo, and more. "The Night" can certainly be read as an allegory for the harassment of displaced Iranians in America. It can also be viewed a parable about honesty and trust in a marriage. Ahari wisely leaves the interpretation up to the viewer as the characters find themselves in a liminal space where the only the truth can set them free.

Ahari and Hosseini spoke with Salon via Zoom (and with the assistance of an interpreter) about "The Night."

What was the worst night you ever had in a hotel?

Kourosh Ahari: It wasn't anything crazy, but there was this one hotel I took my wife to, and the bathroom situation was unpleasant. [Laughs.] We had a crazy night trying to find someone to fix it.

Shahab Hosseini: I was at reception to check out of a hotel and they fined me $150 for smoking in a non-smoking room. I smoked and I paid. [Laughs] That was a bad memory.

"The Night" is a psychological thriller. The hotel is a crucible. What can you say about configuring this nightmare, which at times feels like a dream?

Ahari: I see it, as truly, a psychological thriller. There are elements of immigration, and things, but I see it as our internal fears of our secrets being revealed — or any sort of fear. The whole horror element comes from that. We didn't try to make it scary or have external fear sources. It's all coming from within. The characters find themselves in a hotel as a symbol of the world we are living in, and how we check into this world, and how we check out and go about our lives. What we try to be honest about, and what we try to hide, and how that affects us.

You use silence and sound, shadows, and empty spaces to create a sinister atmosphere and a sense of dread in a liminal space. Can you talk about creating the unsettling mood and tone?

Ahari: A lot of that goes to the great work by our cinematographer, Maz Makhani, and Jennifer Dehghan, who did our production design and all the technical lighting. The concept of it, as Maz and I talked about, goes back to the characters themselves. If we see a lot of shadow and darkness, it goes back to the image of their internal fear — that shadows are where they try to hide the truth. That was the idea behind the tone and the lighting — how dim and dark we wanted this to be.

The film has moments of bloodshed. What are your thoughts about this and other horror motifs?

Ahari: There are elements like the tattoo, the black cat, the shadow Babak sees, and there are different interpretations of it. Everything, I promise you, is answered in the movie. You may not catch it in the first time. You may catch it the second or third time. People have said they were baffled the first time, and they saw the film again and said they saw more and get what's happening. I heard interpretations that come closer and closer to what I had in mind. I do reserve that information, but I enjoy hearing different interpretations. But in the end, it does come down to the audience; what they get from the film and the elements they are seeing has to do with their point of view and the psychological and internal fear they relate to.

Babak is hurting from his toothache, he has been drinking, he is over-tired, and he is unsettled. Shahab, your movement expresses so much of his physical and psychological pain. What can you say about mindset of your character?

Hosseini: My idea of "The Night" was that there is a chronic toothache that leads to a nightmare. I shared this with Kourosh and he liked it. Through the film, gradually, the tooth thing gains in intensity to the point where it frustrates him. He tries to assuage it through drugs and drinking alcohol, and that becomes a gateway to the nightmare. I had not decided in advance what to do or what not to do. I basically went with the story. We have the feeling of the toothache which might start out as a joke of sorts, or a headache that is temporary, but gradually it turns into a full blown nightmare and he finds himself in a swamp he gets deeper and deeper into with no way out.

Babak is stubborn, he refuses to capitulate to his wife; he is haunted. Can you discuss his character and how you built his backstory?

Hosseini: Usually, all of our nightmares are things that have happened in our lives and are a direct result of our behavior. Those who are more selfish, and those who are more indifferent and angry at the world around them, are more likely to be afflicted with a nightmare. Babak acted selfishly in the past. He himself had forgiven himself, but had not sought others for forgiveness, and life, in the form of a nightmare, has now entrapped him and made him face the truth.

The power shifts back and forth between Babak and Neda. What observation do you have about their dynamic?

Hosseini: That's the truth of life; life is not a completely black or white. I think, in most cases there is a great range and shade of gray — going from lightness to darkness. You cannot say this person is always right, or be completely hateful to another. Everything is relative. We cannot love everyone at the same time or hate everyone at the same time. There is good and bad in everyone.

There are thoughts expressed in the film that the characters have been cursed, there are symbols and omens, and ideas expressed by the displaced man that truth will set the characters free. And the film even opens with a game (Mafia) where players lie. What can you say about these incorporating these ideas? And were there specific Iranian references?

Ahari: The game of Mafia is popular in the youth culture and people do play it. Everything we used — a tattoo or the black cat — was to be universal, so that everyone can connect to it. There are certain [cultural] beliefs about a black cat, or a tattoo, but we didn't pinpoint any of these things to be a factor for what was happening. There are reasons for those things to be there. It has cultural meanings for me, but when it comes to the story — and how these elements play into the story — it doesn't directly connect to my cultural beliefs. I don't want to [explain] why it was there. The displaced man is a character who was in opposition to everything happening to the characters. Who he was, and why those elements were there — these things were all answered in the film; I want people to have their own interpretation.

Hosseini: My interpretation, my belief, is that truth, and lying, and treachery are things that do not have a nationality. All kinds of people, all over the world, feel similarly about these things. We did not make an effort to show an Iranian theme other than the fact that the nationality of the family at the center at this plot. The movie could have happened to anyone in the world. It was the human dimension to the story that was of interest to us, not the nationalist aspect. Art knows no boundaries and are is something easily understood by all nations.

Your film is the first American film to receive a release in Iran since 1979. What can you say about that distinction?

Ahari: Well, it's very exciting, and I think the reason it happened was because we wanted it to happen, and we made a decision to make it happen. The opportunity has always been there, and there are, of course, differences in culture and rules and how we can present the film, but to me, it mattered because I wanted my fellow countrymen to experience something a little bit different. This genre is not celebrated in Iran, compared to other places, and I know there is a wide range of interest and fans for this genre. To be the first is an amazing coincidence.

Hosseini: The movie "The Night" is a production of Mammoth Pictures as well as 7Skies Entertainment. Kourosh, Alex [Bretow, a producer of "The Night"], and I have created a company called Pol Media. Pol is a Farsi word meaning "bridge." Our goal is to create communication between the two nations that have been separated for many years. I don't want to say anything about the politics between Iran and America because politics is not my line of work. I am an artist. I have always wished for this to occur, and I believe The Night" has opened the path and has made the bridge stronger. This will be the first film in which the two countries are able to work together through art.

"The Night" will be available in select cinemas, digital and cable VOD Friday, Jan. 29.