In "Writing With Fire," reporters from India's lowest caste defy the patriarchy to seek justice 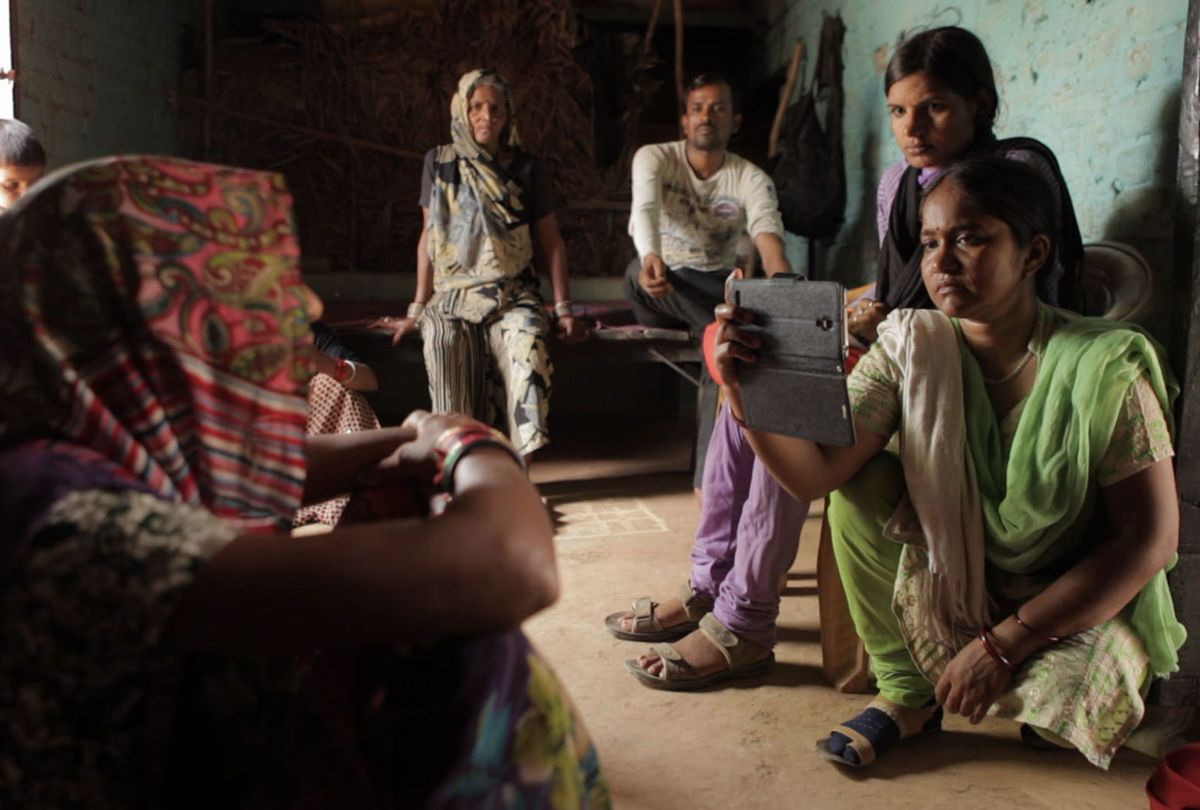 The inspiring documentary, "Writing with Fire," premiering at the Sundance Film Festival, chronicles the impact Dalit women in the Uttar Pradesh state of India have had reporting for "Khabar Lahariya," a newspaper and website. The journalists, who are in the lowest caste in India, have been working for nearly two decades, despite being told what they are doing is "unthinkable." Moreover, the chief reporter Meera's husband, Shivbaran, states in the film, "I never expected them to achieve anything."

But their reporting is effective. Stories on rape and human rights abuses, illegal mining, the lack of toilets, roads, and electricity, as well as politics are creating change. They ask meaningful questions of men in power and hold folks accountable. Meera states that "journalism is the essence of democracy," and reporting is how she fights for justice.

Directors Sushmit Ghosh and Rintu Thomas chronicle the publication's shift to digital journalism (despite many having no real previous access to technology). "Writing with Fire" focuses on a handful of women, including Meera, Suneeta, another ace reporter, and Shyamkali, all of whom are risking their lives to report the truth. As "Khabar Lahariya" starts its YouTube channel, it generates positive and negative responses.

The filmmakers spoke via Zoom from India, about "Writing with Fire" and the efforts of Meera and her colleagues to speak truth to power.

How did you learn about "Khabar Lahariya" and get the women to participate in the documentary?

Rintu Thomas: We never imagined a Dalit woman would be actually printing, reporting, and distributing a newspaper that she co-created. We looked them up and a friend connected us. We wanted to know more. We caught them at the time when they were transitioning into this new realm of digital and understanding being in front of and behind the camera. That was an interesting dynamic for us. We were filming them as they were filming [stories]. The language they used — longshots and close-ups — was similar to ours. They were journalists in the pursuit of the truth, and we were making a film which asks more questions than gives answers. The conversations at the beginning were a lot more informed than in a usual film. That was fascinating for us.

Sushmit Ghosh: The newspaper is a trojan horse to dive deeper into the more complex and nuanced themes the film talks about. We wanted an intimate lens. Who these women are becomes important in the story, which is exactly how we imagined the film.

What can you say about the shift from print to digital journalism?

Thomas: The first few years they were still figuring out the workflow on how to manage the digital beast. Here, practical problems started. A story that would typically take a day took longer. And connectivity was [sometimes] an issue. Internet networks are all over the place, and they would send interviews off to a producer who puts the story together, and then sends it to the editorial team in Delhi. That was a giant process for all of them to figure out. When they became more proficient in YouTube Live, Facebook Live, and Twitter, and as people responded with comments, they realize they were becoming a force. They were online but also on the ground, and it felt like a seamless universe. The flip side was when they reported on things people don't like; the trolling that happens online seeps into real life because they are reporting on villages where the trolls know them, and where they live.

The news stories they cover are social justice and human rights issues, inequality and rape, among other topics. They focus on political stories and corruption. Can you talk about the various stories/case studies you included in the film and why they were selected?

Ghosh: We had huge debates about how to structure the story because we wanted to show more and tell less. How do you talk about 3,000 years of injustice in 90 minutes? We had a lot of cases of sexual violence; every day there were stories of someone who was kidnapped, raped, or murdered. When Meera goes to a Dalit village to report on what it means to be Dalit in those parts of the country, it sets up her own personal story. She talks about her children and how they are made fun of in school. So, the political and the personal always went together. We always wanted it to be layered, intersectional. When Suneeta goes to report on the murder story, you see her brand of journalism and you see the popular mainstream male-dominated brand of journalism picking up juicy bits, like vultures. But immediately after that scene, you have Suneeta talking about what it means to be a woman. So, the idea was picking stories that they have covered that represent what the newspaper does, the value systems, the journalistic ethics of the paper, and linking it to the personal narrative to each of our characters — so it was both macro and micro.

As Dalit women, they are not expected to succeed. Perhaps they have nothing to lose. The women talk about redefining what it means to be powerful and wanting and having freedom. What are your thoughts on their ambitions?

Thomas: When you are growing up in India as a woman, it's very clear in your parenting what you can't do — you can't laugh loudly, you can't go out at night. That social conditioning starts at home. When you are born into a Dalit family, the injustice of social hierarchy makes you invisible as a woman. You're not supposed to have a voice. To step out of the house, you need permission. These are the limitations that these women grew up with. It's defined their identity. It's so inspiring to be around all of them. The three people we focused on were because of their distinct personalities and identities. They fought patriarchy in its most raw form. They got married, had kids soon after, and their agency was almost completely taken away from them. From that space, they sought to educate themselves, and band together as a team and support each other as sisters and friends, and colleagues and bosses. No one saw the Dalit women as leaders, or risk takers, or as thinking women. The acumen of understanding a situation and interpreting it, is hugely inspiring — especially for me as a woman. The idea that when you are not expected to have a voice or succeed, you just live your own life, and that's what their success is. It's owning up to their voice, having dreams for their children, and using their job as a vehicle to demand justice for everyone.

What observations do you have about the caste system? One woman describes it as a "weight on her back," and that caste identity will always follow them. Another woman lies about her caste to avoid discrimination.

Ghosh: The caste system — officially practicing it is illegal; constitutionally, its banned. But how do you give up on something that's been practiced since 1500, 1600 BC? In some parts of India, it's all pervasive. In part of Uttar Pradesh, the caste system works strongly. Some can use water in the well, some can't; some people can walk down a certain road, others don't have access to it. Meera, and Shyamkali, and Suneeta, and all the other men and women we met along the way, have actually found ways to navigate [the caste system] very smartly. Shyamkali says she's not avoiding the fact that she's low caste, she's just finding a way to do her work so there is a level of comfort so [people] will talk to her. We see them as nuanced folks who have found way to beat the system, but as Meera says, "How do you beat a system you're a part of and can in a sense never get out of?" That's why they have such big dreams and ambitions for their children.

Thomas: Unlike race, caste is invisible. A majority of women have discarded their second name, and they the go with Devi, which means goddess in Hindi. It's seeped down to how they define themselves. Their very names say "no" to a system that signifies who you are supposed to be, defined by your caste. You are born with it, so you can't step out of it, in a tangible way, so you learn how to fight it in your own silent and strong ways.

The film emphasizes education and the importance of work for women and how that can create economic independence. Can you talk about that issues?

Thomas: The idea is that women are not expected to run the house by being financially independent. The model is you get married and take care of house, and the man goes out, brings in the money, and gives you some to run the house. That's the power dynamic. The structure is completely destroyed when the women is going out and making the money to run the house. That means she has the financial independence to make decisions that typically she wouldn't be allowed to. She can decide what school her children go to, what age they marry, do they marry or not marry. That's something Meera told us — that being financially independent gave her the identity of "me being me," and not in relation to another person. "I can choose how to run my family." We thought this was pretty phenomenal. When you take financial independence from a woman what she is left with is entire dependency. When she owns that financial independence, she has independence of thought and agency. Without education, it's debilitating. You are not respected because you can't speak in a way that reflects your thoughts.

These women are holding up a mirror to society. What can you say about these reporters who take great risks, and ask tough questions to people who want to silence them?

Ghosh: Meera and her journalists are showing us a new way of looking at an old world. Being Dalit women in India, they are at the bottom of India's social pyramid, and they have essentially inverted it. They have become a very powerful force. With journalism in India, it's always a very complex narrative. Most of mainstream journalism now is moving away from what truth to power really is. Most of mainstream journalism is about not asking those critical questions that should be asked, but pandering to a philosophy of appeasement. "Khabar Lahariya" and Meera are asking the right questions. I don't think they are critical of the state. This newspaper is a pro-justice institution, and that is where they derive their power from. Values of equity, and justice, and feminism are deeply embedded into their working ethos and who they are as women themselves. That reflects what they do and how they report.