In the third season of ABC's comedy, Becky and Darlene's boss Robin returns for a role that is understated & great 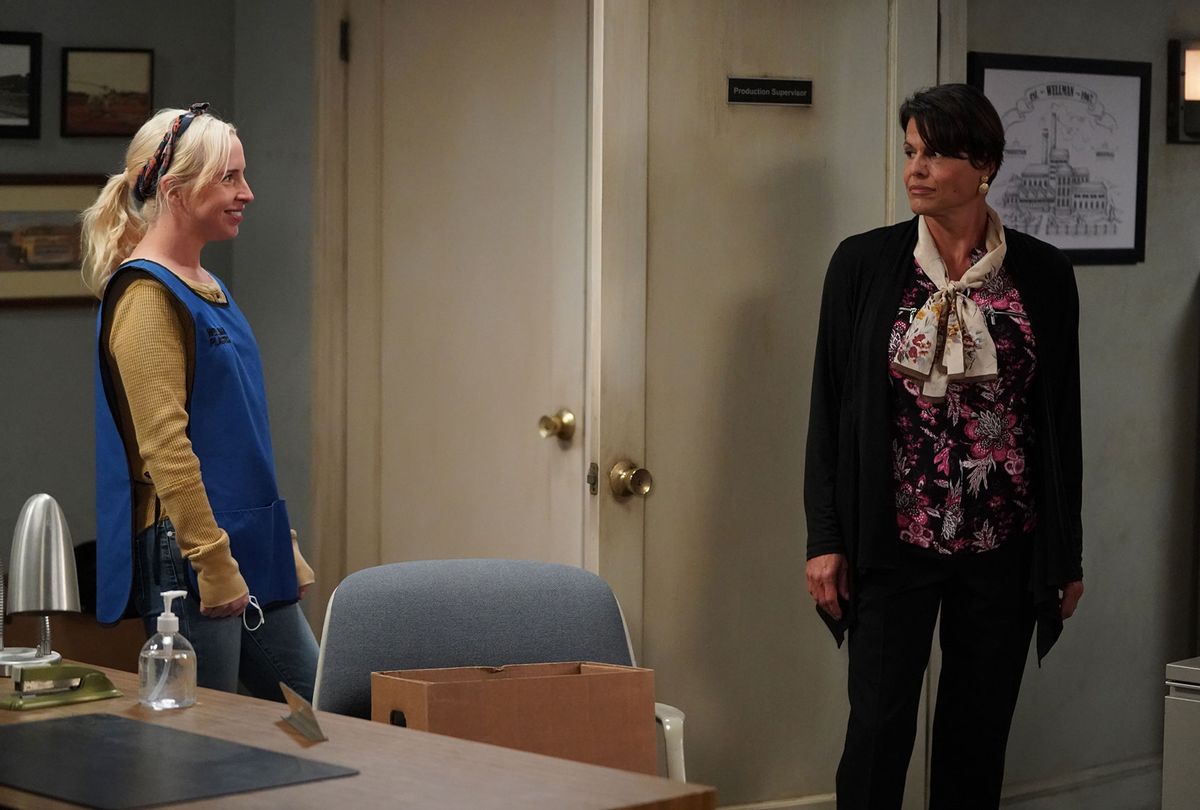 Lecy Goranson and Alexandra Billings in "The Conners" (Eric McCandless/ABC)
--

Whenever Alexandra Billings appears on "The Conners" she noticeably does very little. This is a compliment. As Robin, Becky and Darlene's boss at Lanford, Illinois' local plastics factory, Billings – a recurring member of the cast in the sitcom's third season – does a lot of heavy lifting with very little dialogue, and one would expect of a mid-level supervisor who strives to be taken seriously and knows she can't fail.

She's tough but fair, smiling sparingly and dressing frumpily. Her interactions with the Conner sisters inspire each to take on more responsibility: Becky (Lecy Goranson) becomes a union boss, while Darlene (Sara Gilbert) persuades Robin to groom her for management.

We know Robin has been married three times, has no kids and dotes on a poodle hybrid that Darlene tells her looks unfortunate. Robin respects hard work, which is how she initially notices Darlene's potential; she also respects honesty and trustworthiness, which earns Becky some leeway with her, albeit tenuous.

The writers are not compelled to glam her up or goof her up with demands to deliver broad comedy. Robin – who like Billings is a transgender woman – is simply allowed to be. This shouldn't be unusual enough to call out in this day and age, but it is.

Only recently have shows begun consciously writing trans characters in a way that make their individuality the focus instead of aspects of gender identity and disclosure. The other ABC show Billings appeared on before her recurring guest stint on "The Conners," "How to Get Away with Murder," demonstrates what I'm referring to.

In one "HTGAWM" episode, Billings plays a professional who kills her abusive husband in self-defense, and as part of the drama Viola Davis' character Annalise presses her client on whether her husband "knew." A cop accusingly flashes her character's driver's license in her face, doubting her story because the photo on it features the character before her gender transition. Nobody directly and specifically accuses Billings' professor of deceiving the world, but it's implied in all of the oblique lines of questioning.

To be fair, this episode first aired in 2015. Conversations regarding gender issues have evolved since then in all spheres, especially given the dangerous rollback in LGBTYQIA+ rights over the past five years.

"The Conners" debuted in 2018 almost as an act of defiance, with critics wondering whether the show could or should go on without Roseanne Barr, the eponymous star of the "Roseanne" revival that gave ABC its first top-rated show in nearly two decades. Barr was fired at the end of the first season for posting a racist tweet, but Gilbert and the rest of the show's executive producers found a way to continue without her, likely buoyed by the fact that the core of the show soon demonstrated itself to be Becky and Darlene's relationship.

Besides, "The Conners" is much more like the original "Roseanne" than the revival in spirit, in that the series interacts with hot button issues like race, class, gender identity and sexual orientation with empathy and realism instead of speaking clumsily to misperceptions and prejudices. And in these recent episodes that applies to both Robin and the community around her.

There's been little to no effort to spin up a subplot catering to prurient curiosities about her – and besides, she puts enough about herself out there to let the audience know who she is.

Thus far "The Conners" has only brought up that Robin is trans once this season in a December episode written by Debby Wolfe, "Protest, Drug Test and One Leaves the Nest." It did so via the completely organic circumstance of a new mandate requiring supervised drug testing. All of the workers are appalled at the thought of this invasion of privacy but only Robin, who announces the mandate, declares she's going to quit.

Gossips on the assembly line assume her abrupt resignation is due to a substance abuse problem but only Becky, who is in recovery, approaches her with an offer of support, saying she wished someone had reached out to her. This leads Robin to share with Becky that she is trans, stressing that's nobody's business but hers.

Becky, being a Conner, agrees wholeheartedly and says that nobody should force her to come out. Robin waves that away and corrects her. "I came out a long, long time ago. All of my husbands have known, my friends know, my family knows. It's the people that don't know that don't need to know," she explains. "It doesn't matter to my dry cleaner and it doesn't matter at work. It's not worth the PTSD. That happens a lot in our community."

Robin goes on to bring up how disclosure is shown in movies like "Ace Ventura: Pet Detective," "where all the men vomit because they find out the woman is trans. Doesn't make you want to share stuff."

Becky replies by joking that maybe the actors were puking because they realized they were in that movie, which lightens the mood. Then she assures Robin that she'll keep the information she's shared in confidence, which she has.

The circumstance of this reveal are important because what Becky does next emphasizes the importance that everyone protect their right to privacy. None of the cisgender women in the factory wanted a stranger watching them urinate, either. They just didn't realize they had a right to protest this violation until Becky raised the issue and obtained a compromise: she would do the supervising, thereby protecting Robin.

With a season-to-date same-day viewership averaging around 3.8 million, "The Conners" isn't anywhere close to being the highest-rated broadcast comedy on the air right now; that honor belongs to another spinoff, CBS "Young Sheldon."

But it is using its platform as a network comedy about a working-class family familiar to multiple generations to thoughtfully bring a transgender person into the lives of millions of people who likely have never met or interacted with someone like Robin.

One can't overstate how important that is at a time when comics on other network series are still making transphobic jokes, and legislation is still directed at curtailing the rights of transgender people instead of expanding and strengthening them. I'm also obligated to point out here that HBO also recently aired a standalone episode of "Euphoria" about Hunter Schafer's Jules that shows her movingly grappling with what it means to be trans and the weight of living in a female body.

Many millions more people have access to ABC than HBO or HBO Max, where "Euphoria" is currently streaming. Past episodes of "The Conners," including "Protest, Drug Test and One Leaves the Nest," can be seen on Hulu.

Admittedly we may notice Billings because we know her from "Transparent" and the many other shows she's been, in in the same way we notice Laverne Cox, Mj Rodriguez, Trace Lysette or any actor who has delighted us over the years. We like these performers because of their talent, who they're playing and how they're written. That's all we need to know about them, which is entirely the point of making sure America sees Billings, and Robin, as someone reminiscent of every mundane middle manager they've ever worked with.

"The Conners" airs Wednesdays at 9 p.m. on ABC.