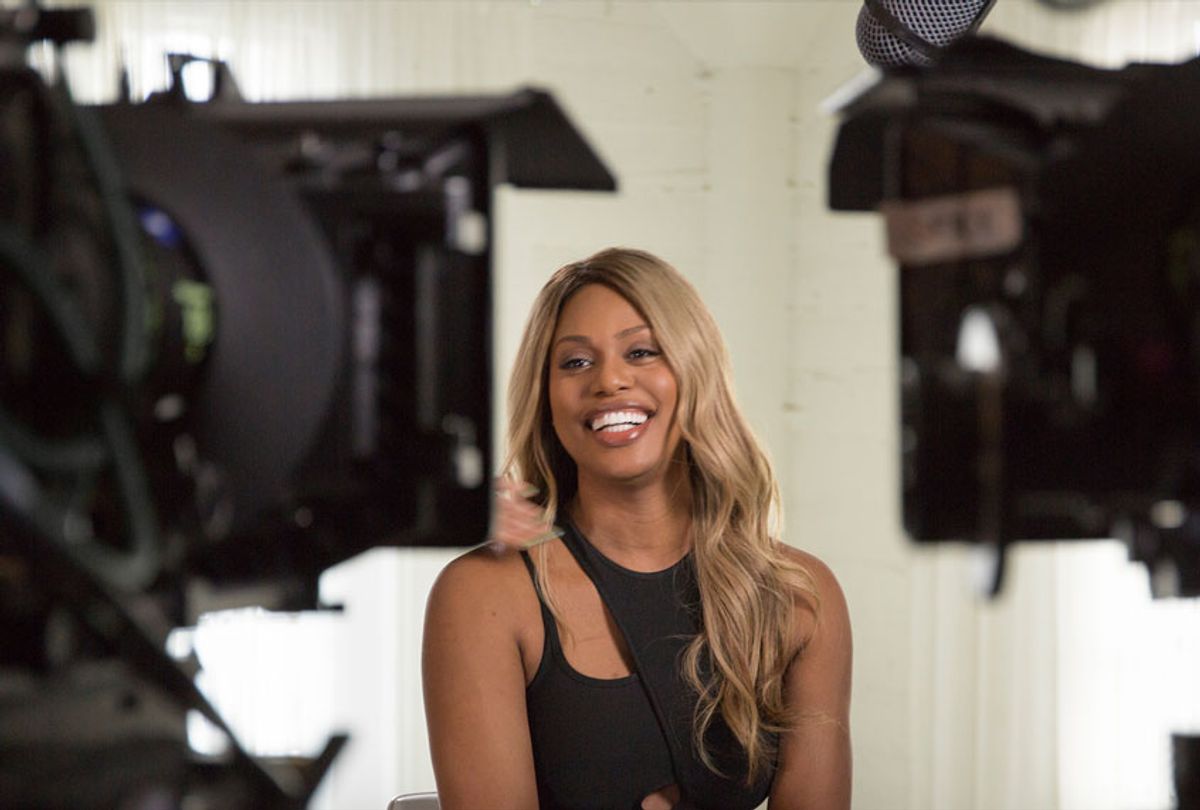 Past the halfway point of "Disclosure," a new Netflix documentary chronicling Hollywood's profoundly flawed relationship with and portrayals of transgender life, writer and actress Jen Richards ponders aloud how she would feel about herself, as an out trans person, if during her formative years she had never seen any representation of herself in the media.

On the one hand, Richards observes, she may never have internalized a sense of being monstrous. She might have gone into the world free of the fear attached to the disclosure of her identity and never viewed herself as abhorrent or a punchline. "I might be able to go on a date with a man without having the image [on her mind] of men vomiting," she says.

Then Richards presents the flipside: Would she even know she was trans if she had never seen any kind of depiction of gender variance on screen?

"Disclosure" elegantly captures the complicated in this moment we're living through, when a plurality of Americans appear to be waking up to the nation's unresolved racial animus and its failure to grant equal treatment and protection to every citizen.

It enters the Netflix stream amid tough competition for attention, but its crisp aesthetics and the grace of its subjects place it among the ranks of the easiest to watch and most clearly presented documentary offerings. It teaches us a lot, and it is as likely to devastate the viewer as it is to offer hope and beauty.

"Disclosure" is full to bursting with such contemplative moments as Richards', where its subjects thoughtfully find some small pearl of positivity in a gigantic manufactured lake of insult and pain. She shares this thought in the wake of a barrage of all-too familiar images through which Hollywood has conveyed its vision of the trans experience.

Some of them are quite famous, like the "shocking twist" used to promote 1992's "The Crying Game." Or Hilary Swank's Oscar-winning portrayal of Brandon Teena in 1999's "Boys Don't Cry," a film one subject recalls moving him, while at the same time leaving him with the impression after seeing it of, " 'Oh my god, I'm going to die.'" Another points out the movie's complete erasure of fellow victim Phillip DeVine, a Black man, from the narrative.

Directors Sam Feder and Amy Scholder don't merely glean samples from independent films. Many of the frames of dead or exploited trans characters strung together are from hugely popular series such as "CSI," "Sex and the City" and "Grey's Anatomy." Presenting these scenes one after the other drives home how prevalent negative images of trans people are in the culture millions consume on a daily basis.

On television, transgender women are most commonly portrayed as sex workers. In procedurals, they've made for titillating murder victims. In hospital dramas, they're devices through which the writers can depict someone dying in a unique way, typically by way of an affliction affiliated with their assigned gender at birth or disease related to the hormones they're taking.

In one passage so criminal that it almost slides into the arena of black comedy, the film shows Alexandra Billings dying of testicular cancer on an episode of "ER" and breast cancer in an episode of "Grey's Anatomy," both of which aired in 2005.

"I've been on a lot of hospital shows! I died, a lot. They kept killing me!" she says, later adding, "Trans people don't die from their life-saving alternative to the gender containers they've been assigned. That's not what kills us."

This aspect of "Disclosure" is sobering, perhaps even shame-inducing to viewers who may have simply allowed these images to wash over them without contemplating their implication. Similarly, "Disclosure" spells out the negative impact of cisgender men playing transgender women, the debt the fashion industry owes to transgender women, sex workers specifically, and acknowledges the relative lack of progress in the realm of trans-masculine visibility.

Equally worth noting is the means by which "Disclosure" celebrates the impact trans people and culture have on mainstream culture and the ways, however flawed, by which TV and film gave people like Richards some proof that they weren't alone in this world.

"Disclosure" intersperses its contributions from these more famous voices with input from thought leaders operating from behind the scenes, including analysis from historian and theorist Susan Stryker, producer and director Yance Ford, writer and activist Tiq Milan, and others.

The inclusive mix of interview subjects Feder and Scholder call upon enables "Disclosure" to address the trans experience from myriad lenses, beginning with the macro of American society at large before breaking down gains and setbacks through the frameworks of race, class and internecine discrimination from within the LGTBQ+ community.

The filmmakers carefully calibrate their approach so as not to sugar over the stark truth that as far as this movement for trans acceptance has come it still has so very long to go. And this is plain to see in the headlines popping up in such close proximity to the documentary's Netflix debut.

The U.S. Supreme Court's historic ruling that the 1964 Civil Rights Act protects gay, lesbian, and transgender employees from discrimination based on sex became public on Monday, June 15. The Friday prior, on June 12,  the Trump Administration tossed out protections for transgender people against sex discrimination in health care, originally put in place by former President Barack Obama.

Series such as "Transparent" and "Pose" depict the lives of transgender characters, played by transgender actors, with grace and humanity, with "Pose" centering trans women of color. At the same time, and despite wide appeal of these shows, violence against trans women, especially Black and Latinx transgender women, is a national crisis. According to Human Rights Campaign, at least 15 transgender or gender non-conforming people have been murdered in 2020, among the most recent being two Black women, Dominique "Rem'mie" Fells and Riah Milton.

With absolute precision "Disclosure" makes the case that the all-too-common portrayals of transgender characters on TV over the years have contributed to this epidemic through the reckless objectification of transgender people.

In this way "Disclosure" guides the audience through connections they might not have made before. Some are obvious, like the casual and prevalent bigotry inherent to transgender deceit trope, the frequency that reactions of physical revulsion to trans bodies are played for comedy.

The common trait that struck me most deeply while watching "Disclosure" is the absolute grace and forbearance these men and women display despite every indignity foisted upon transgender people. At the moment mainstream America is in a mood to learn and celebrate the differences within its culture, but in doing so it must be acknowledged how exhausting it is to know, at all times, that your mere existence in public spaces is a political act.

Cox explains that even the most misguided attempts to examine transgender life can be opportunities to shift thinking. Folks can evolve, she says, citing a years-old interview in which Oprah Winfrey featured a trans woman in a most clumsy and undignified fashion to a recent, far more mindful interview with Janet Mock. For that matter, Cox does not hold back on her disdain of how Ryan Murphy wrote trans characters on "Nip/Tuck," later citing the intentionally inclusive creation of "Pose" as evidence that it is possible to learn and thereafter use one's platform as a brilliant force for good.

This may be the most powerful reveal and revelation "Disclosure" affords, that in spite of everything, the best way to survive is to hold on to hope that somehow, we can all be better in how we view each other and how we treat one another. The alternative is too ugly to entertain.

"Disclosure" is currently streaming on Netflix.