Starring Kate Hudson and Maddie Ziegler, this musical is one of the most grotesque films I've ever seen 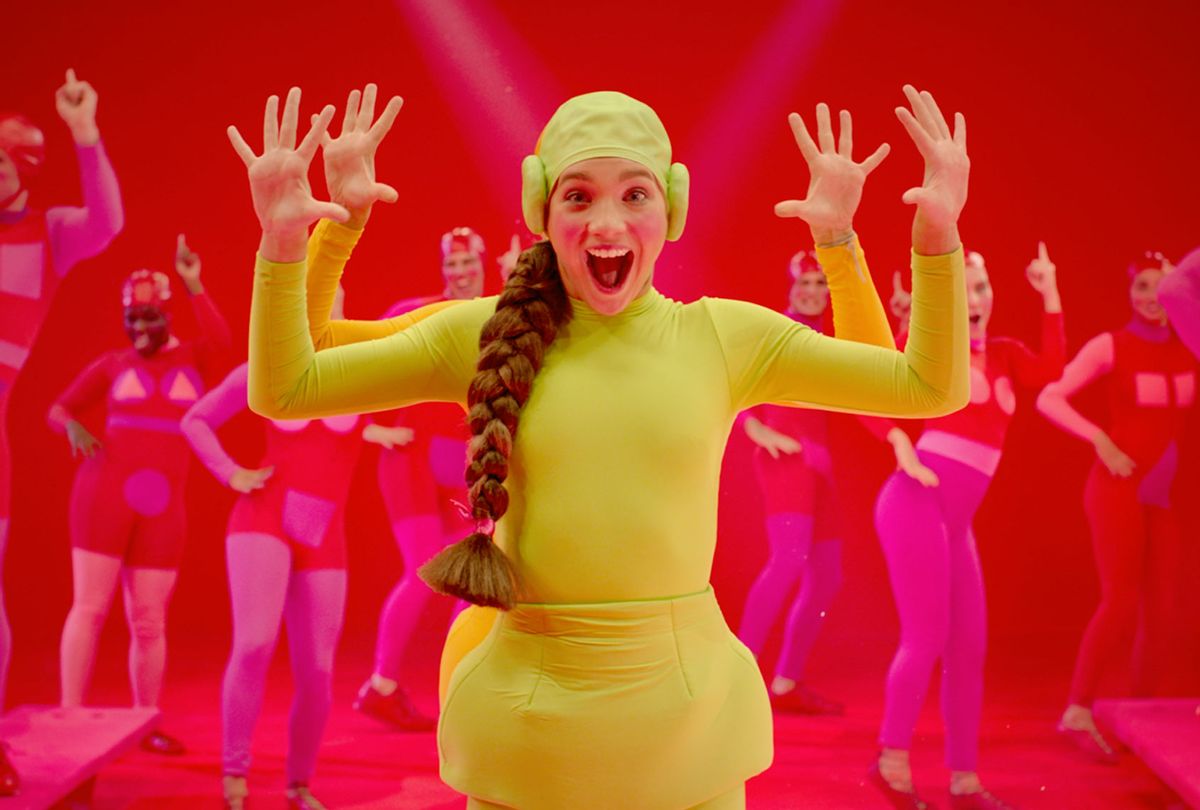 I am autistic and a fan of Sia's songs. As I watched her feature directorial debut "Music," I felt overwhelmed with emotions . . . none of them good.

This movie isn't just offensive; it's patronizing. "Music" is the cinematic equivalent of having someone who claims to be your friend pat you on the head for 100 minutes and say, "Aren't you cuuuuute?" It cares about autistic people, I sense, but it isn't listening to us.

The result is one of the most grotesque films I've ever seen, a movie that literally left me staring in shock with my mouth agape for much of its running time.

"Music" — which is directed, co-written and co-produced by the Australian singer/songwriter — tells the story of Kazu "Zu" Gamble (Kate Hudson), a former drug dealer struggling to stay sober and achieve basic adulting milestones. As hackneyed indie films are wont to do, a marginalized person becomes a plot device to help the protagonist achieve her goals; in this case it's Zu's teenaged autistic half-sister named Music (frequent Sia collaborator Maddie Ziegler), who is placed in Zu's care after the unexpected death of their grandmother.

Along the way various talented actors pop in to have brief subplots that either go nowhere or build to disappointing conclusions: Leslie Odom Jr. as Zu's love interest Ebo, Héctor Elizondo as a kindly neighbor, Ben Schwartz as a drug dealer with a heart of gold, Beto Calvillo as Music's local friend. All of them are capable of much better than the cheesy material that the script has given them, and they do the best they can with their one-dimensional and (in some cases) offensively stereotypical characters. None are responsible for what is wrong with this movie.

No, the movie has three big problems. Each on its own would tank it, but combined they create a viewing experience that is singularly unpleasant and painful.

Ziegler's performance as the titular character is at the top of the list. For one thing, as I've explained in other articles, it is problematic for a neurotypical (non-autistic) actor to be cast as someone on the spectrum, both because there are plenty of autistic actors who could be cast in those roles and because those performances can easily slip into a kind of ableist minstrelsy. Such is unfortunately the case with Ziegler, who juts out her jaw, makes bug-eyes, emits guttural sounds and wildly mugs for the camera. Her facial expressiveness — which was an asset when she danced in Sia music videos like "Chandelier" and "Cheap Thrills" — is a fatal liability here. It reminded me of the Simple Jack subplot in "Tropic Thunder," a 2008 film in which Ben Stiller stars as an actor who tries to win an Oscar by playing a mentally disabled person and fails because his performance is so over-the-top way that it becomes cringe-y rather than compelling.

"Tropic Thunder," incidentally, was made in an era when few in the film industry saw a problem with neurotypical people playing atypical characters, and to be fair that dynamic did occasionally produce masterpieces like "Sling Blade" and "Julien Donkey-Boy." More often than not, though, it led to tone-deaf and cloying products that made you wince, from "i am sam" and "Rain Man" to "Forrest Gump." (The last two won four and six Oscars, respectively; "Sling Blade" only netted one.)

Sia, for what it's worth, claims that she cast Ziegler because she originally chose a "beautiful young girl non verbal on the spectrum and she found it unpleasant and stressful." I find it impossible to believe that there were no other autistic thespians Sia could have picked, including a verbal autistic actor if necessary. Autism is a spectrum, and no two people present in the same way, but Sia could have chosen an actor who is at least on the spectrum, even if that person's symptoms were not identical to those of the autistic character's.

I can't know for sure if Sia and Ziegler were Oscar-chasing here, but like the Stiller character in "Tropic Thunder," Ziegler's acting reeks of someone going too far playing a person in a marginalized group in the hope of being recognized during awards season. (Indeed, "Music" has inexplicably garnered two Golden Globes nominations, though thankfully neither are for Ziegler's performance.) Even if that wasn't their motivation, the central role is played in a way that had already been recognized as embarrassingly out of touch more than a decade ago. It's inexcusable.

The second issue is that the film isn't even particularly interested in Ziegler's character. The focus of the story is Zu and her efforts to recover from her alcoholism and drug-filled lifestyle. Given Sia's own past struggles with substance abuse, it makes sense that her directorial debut would center around someone fighting similar demons, but the problem is that it renders the autistic character a mere prop. Music has no character arc to speak of and, aside from some pretentious interpretive song-and-dance numbers meant to put us "in her mind," we never get a sense of her personality or perspective. She is opaque from start to finish.

The end result is a movie not about what it's like to be autistic, but rather how a neurotypical person perceives someone who is autistic. Sia even admitted as much when she tweeted, "The movie is both a love letter to caregivers and to the autism community. I have my own unique view of the community, and felt it is underrepresented and compelled to make it. If that makes me a sh*t I'm a sh*t, but my intentions are awesome." Therein lies the core issue: "Music" isn't really about an autistic person, but about a neurotypical person displaying her "awesome" intentions through an autistic character. What Sia views as a "love letter" to a marginalized group comes across as a love letter to people who think they're writing love letters to marginalized groups.

The final problem with "Music" is arguably the most serious one, at least from a moviegoing perspective: It's just plain boring. To be clear, its other offenses would still have been unforgivable if it had been entertaining, but at least then I might have derived something positive from the experience. Yet the story is so predictable, the characters so bland and underdeveloped, the pacing so meandering and half-hearted that I had to pause it several times because I could only endure my anguish in morsels (doing so in one giant gulp would have been unbearable).

There are also big plot holes, such as why a drug dealer and addict would be entrusted to care for a teenager or why Zu's love interest swings from desiring to shunning her without any discernible reasons for doing so. The best thing that I can say about "Music" is that the songs themselves are catchy – Sia is a very talented singer and songwriter, after all – and the set design in the music videos is colorful and creative. Yet these aren't strong enough for me to recommend the movie (maybe the soundtrack), and the rest of the film is so boring that I can't suggest it as "so bad it's good." It's just bad, plain and simple.

Having said all of this, do I think "Music" should be canceled, as some activists argue it should be? No, and for two reasons: First, for all of its faults, I do not get the sense that Sia made this movie with hate in her heart, and therefore I do not see Sia, her collaborators or the movie itself as deserving of the ultimate form of cultural sanction. Second, bad art can teach valuable lessons that inspire good art. "Music" can serve as an object lesson for future filmmakers dealing with sensitive subjects, reminding them to pay attention to the voices of the communities they ostensibly aspire to represent. I do not think Sia or Ziegler deserve to suffer career destruction from this movie. They do, however, need to realize what they did was wrong and hurtful. Hopefully they can make better movies in the future.

For what it's worth, Sia has apologized for aspects of the film, such as its disturbing implied endorsement of physically restraining autistic people who suffer meltdowns (she said those scenes would be cut from future releases, although they were in the screener that I saw), and has admitted that "my research was clearly not thorough enough, not wide enough." She has even acknowledged "being ableist to a degree; I'm not proud of it," and says that she learned her lesson. If the chief problem with today's world is that we don't have enough empathy — and I firmly believe that to be the case — then I will give Sia the benefit of the doubt and accept her apologies as sincere. I don't think it would be fair to entirely dismiss her oeuvre, or her character, because of this mistake.

Yet, aside from being an example of what not to do when making a movie, I sure as hell am not going to recommend "Music."

"Music" is in select IMAX theaters on Wednesday, Feb. 10 and in select theaters and on demand beginning Friday, Feb. 12.