Though many politicians try to engender belonging with their food choices, they often fall short in their endeavors 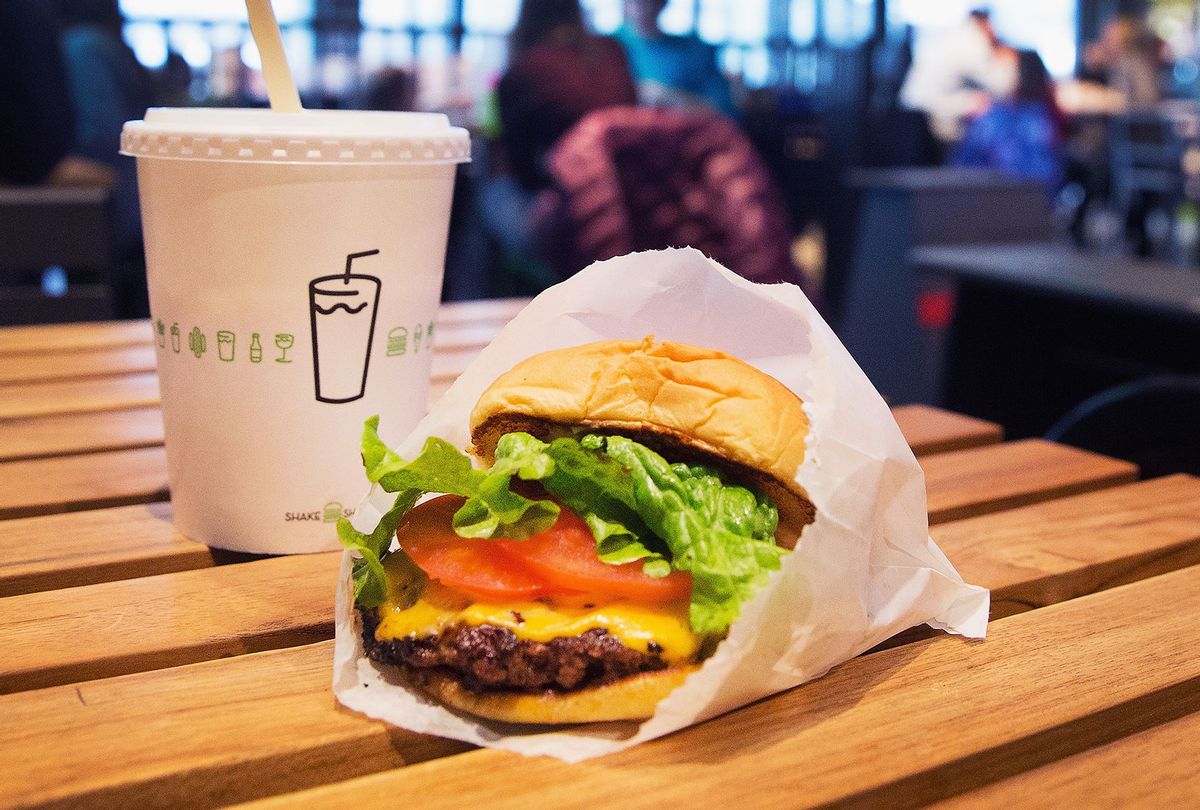 In this photo illustration, a cheeseburger and drink is served up at a Shake Shack restaurant (Scott Olson/Getty Images)
--

In the "Valentine's Day" episode of the second season of "The Office," Michael Scott (Steve Carrell) traverses from Scranton, Pa., to New York for a meeting with Dunder Mifflin corporate. "The meeting isn't until three, but I always like to come a little early," Michael explains to the camera. "This is where I do my haunts."

Scott walks down the street, before exclaiming, "Oh, look! My favorite New York pizza place. I'm going to go get me a New York slice." When the camera pans up, he's pointing to a Sbarro — a pizza chain that once occupied a slot at the top of the mall rat food pyramid.

It's a moment that's absolutely steeped in cringe — which is the default setting for many of the show's most memorable episodes like "Dinner Party" and "Scott's Tots" — because it's such a clear indicator of who the real Michael Scott is on the inside. He very confidently asserts his opinions about what is accurate or authentic despite not typically having the background to support such statements. He also longs for approval, but to people who know better, he comes off as a clueless, if lovable, try-hard.

Former Democratic presidential hopeful Andrew Yang, who is currently preparing for a mayoral run in New York, made a Twitter post this weekend with definite shades of Michael Scott.

"Does Shake Shack still count as an NY restaurant? My boys say yes," Yang tweeted on Feb. 13, alongside an image of a Shake Shack burger, fries and a shake. "I remember waiting in line at the original Madison Square Park location — those were the days."

The post sparked some immediate, though mostly lighthearted pushback. If Yang was a real New Yorker, wouldn't he have said "on line" instead of "in line"? Some asked whether the politician had visited other old-school New York establishments, like Bubba Gump Shrimp Company or the M&M store.

Yes, Shake Shack was started in New York, but it's now an international chain that was roundly criticized for receiving a $10 million loan intended for small businesses through the Paycheck Protection Program. So why did Yang use his platform to highlight Shake Shack over a local restaurant that's ailing from the COVID-19 pandemic?

Yang has made attempts to assert his "New York-ness" ever since announcing his run for mayor in a January video directed by Darren Aronofsky, who was born in Brooklyn. In the footage, Yang, who was born in Schenectady and grew up in Westchester, explains that he "moved to Morningside Heights" in 1996. (He went to Columbia Law School.)

"He strolls through Coney Island, grabs a slice of pizza, ribs the Knicks and debates the superiority of Gray's Papaya versus Papaya King with his wife, Evelyn. ('Gray's Papaya,' he answers, confidently)," wrote the New Yorker's Michael Schulman.

He continued, "But Yang's rollout immediately tripped over a series of authenticity tests. A Times piece pointed out that he has never voted in a New York mayoral election, and that he has spent most of the pandemic not at his Hell's Kitchen apartment but at his weekend house, in New Paltz, or (horrors!) campaigning for Democrats in Pennsylvania and Georgia. 'Is he a New Yorker? I don't even know,' one business leader said."

Yang continued on with what Shulman described as a "social-media authenticity blitz." The politician posted a video of himself at what he claimed was as a bodega, where he bought green tea and bananas. But the midtown shop looked a little too sleek for some viewers, and it sparked a debate over what differentiates a bodega from a deli or convenience store.

Yang, undeterred, went on to post about sampling pickles on the Lower East Side and visiting a food pantry in Flushing. "I'm learning a lot about my city," he tweeted at the time.

It's not unusual for politicians to attempt to engender belonging in their respective communities or in places where they're campaigning through their food choices. There's something both primal and endearing about the sentiment of eating together as a way to bond over shared ideals.

But it's a precarious proposition, one that could easily backfire and expose how much of an outsider you actually may be. Political history is filled with similar gaffes: John Kasich eating pizza with a knife and fork; John Kerry ordering a Philly Cheesesteak with Swiss cheese instead of Cheez Whiz; and 2000 Republican presidential candidate Gary Bauer falling backwards off a New Hampshire campaign stage while trying to flip a pancake.

The clearest example of this was in 1976, when former President Gerald Ford was running for re-election against future President Jimmy Carter. Ford and his team made a stop in San Antonio to visit the Alamo. While there, he was offered a plate of tamales. What followed was one of the most memorable campaign trail faux pas. Lila Cockrell, who was mayor at the time, remembers watching as Ford bit into a still-husked tamale.

"I think he just picked up the plate, because if someone had given him the plate, the tamales would not have had the shucks," Cockrell said. "The president didn't know any better. It was obvious he didn't get a briefing on the eating of tamales."

Ford nearly choked on the dry husk, and the Texas media trailing the candidate had a field day. Former Arkansas Gov. Mike Huckabee, who was living in the state at the time, said in an interview with Sporkful that every newscast in Texas broadcasted footage all weekend long of Ford gagging on a tamale.

"To this day, I am convinced that it was that gaffe with the tamale that cost him the state of Texas," Huckabee said.

It's unlikely that Yang's Shake Shack tweet alone will have a similar effect on his campaign, but it has opened him up to a fair amount of ribbing about how authentically "New York" he is, and in turn, his plans for real people who live outside of the curated pages of his eat-the-city political playbook.

After the bodega fiasco, Yang signed back online to find that thousands of Twitter users had logged on just to roast him. His response was simple, "Haha I love New York" (alongside a smiley face).

Time will tell if New York will grow to love Yang in return.