"Kenan," "WandaVision" and the case against forcing laughter into grief

A dive into how comedies are changing the way their characters deal with loss, and where the humor can be mined 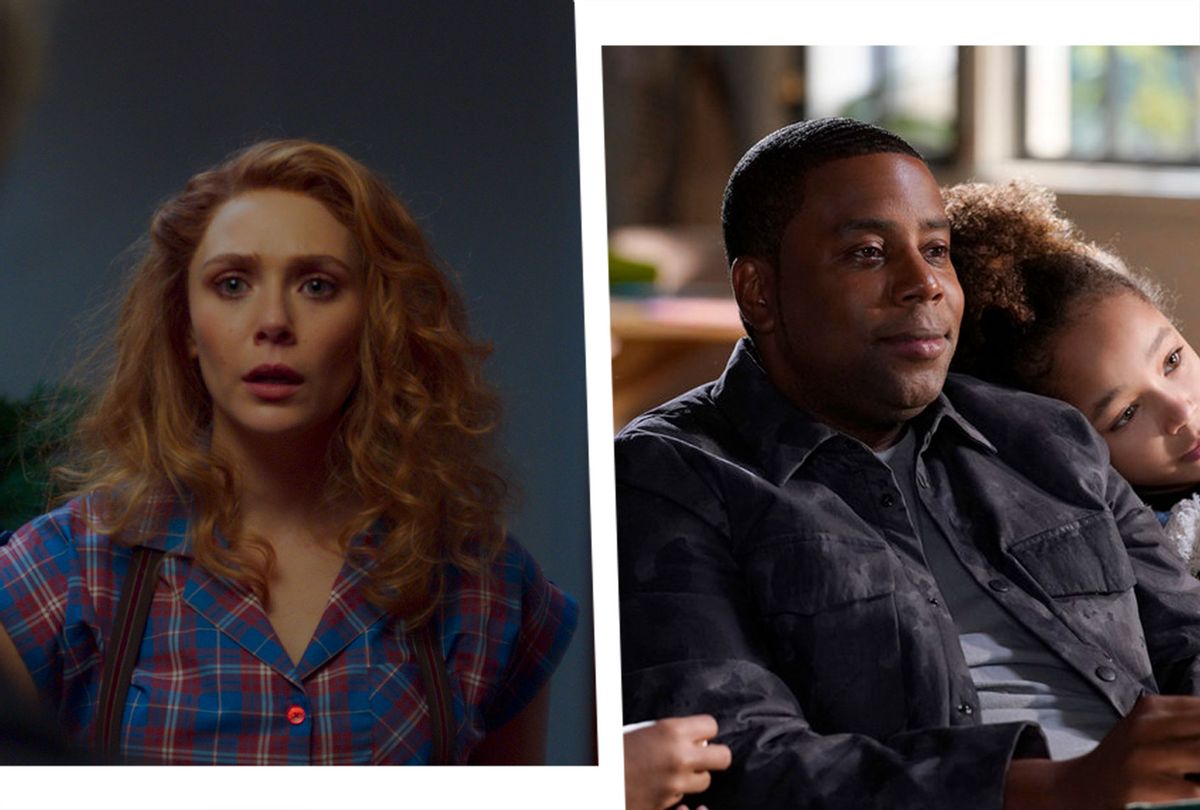 "Kenan" is not NBC's next great comedy. It barely qualifies as middling. But it is worth watching at least once if only to appreciate what's missing.

I'm talking about the laugh track.

"Saturday Night Live" performer Kenan Thompson's first primetime vehicle is produced in a way that make it resemble a standard multi-camera family comedy, leading a person to expect gales of canned laughter to flutter over designated punchlines like Don Johnson's corny "sax to be you!" groaner featured in the promos. But the recorded giggles never appear, which seems like a technical error until we consider the details of Kenan's situation.

The title character's wife Cori recently died, leaving him to care for his daughters Aubrey and Birdie (Dani and Dannah Lane) with the help of his brother Gary (Chris Redd) and father-in-law Rick (Johnson), who came to help out after his daughter's death and still hasn't gone home a year later.

The widower-with-children situation is a TV sitcom classic, a tried and tested formula that played out long before "Full House" became a cultural phenomenon. "Family Affair," "The Andy Griffith Show," "The Courtship of Eddie's Father," all of these series drop men in the starring role of caretaker and breadwinner – mom and dad – wringing humor from the harried challenges of men taking on single parenting. Imagine!

But Thompson's father knows how to care for his kids. Fictional Kenan wakes up cruelly early, carefully choosing his girls' outfits, preparing their lunch as he makes himself coffee. That part he has down cold. It's the rest of his world that's falling apart because he can't fully acknowledge his loss.

Kenan also is the host of "Wake Up with Kenan," Atlanta's most successful morning program, where he usually excels at connecting the live studio audience with stories about his wife and daughters. But he avoids cheerfully bantering about his family whenever it comes up. He can't even call Cori "mom" when he talks about her to his daughters, referring to her instead as their "deceased parental figure" whenever it comes up.

"Kenan" follows the beats of a multi-camera sitcom thereby enhancing our awareness of a live studio audience's absence and the omission of any manufactured punch-up. The pilot's shiny, hollow merriment stumbles through the motions of a sitcom, but that's OK when you realize most of its jokes are rooted in Kenan's reluctance to face reality. The humor comes across as gentle and sweet, not quite lame but distinctly lacking in zing. A laugh track would only call attention to the writing's edge deficit. A lack of one buys the story some grace.

Television trends constantly re-evaluate our relationship with sitcoms and the laugh track, just as TV sitcoms grapple differently with life's sadness from era to era.

"Kenan" isn't the first show to feature a major comedy star as the headliner of a story about contending with massive loss. In fact, NBC had another show about a broadcaster mired in denial over his wife's death in 2012 – "Go On," starring Matthew Perry as a man who learns how to grieve in group therapy. Since a "Friend" was attached to it, "Go On" ran for a full season. But it never caught on for a number of reasons including, I'm guessing, the lack of appetite to try to find something to laugh about in other people's despair.

But in the way of so many things the show plays differently now that it did nine years ago when the thought of a pandemic crippling our nation and killing nearly 500,000 Americans was unfathomable. This is not to say that death is more of a laughing matter these days but rather to surmise that there are many more people who can relate to the absurdity of grief now than were in the audience back then.

It's worth noting that "Go On" did not use a laugh track.

Forced laughter went out of style when cable comedies brought single-camera productions into vogue and broadcast laughers like "Malcolm in the Middle" began applying cinematic techniques to the sitcom format, but even before them some creators resisted recorded laughter, resenting its artificiality.

This is driving inspiration of another show about depression, which is really just another flavor of grief: AMC's upcoming "Kevin Can F**k Himself," which folds a standard multi-camera sitcom about a wife propping up a worthless goofball husband into a dark drama version of the same story. In its sitcom half Annie Murphy's Allison is a housewife made to clean and put up with her husband's laziness and antics with good humor as recorded laughs roar at every dumb joke he makes; in the dark single-camera side of the show she's enraged and homicidal.

"Kevin Can F**k Himself" positions sitcom laughter as boorish and dehumanizing.

The other side to this argument points to the overwhelmingly broad success of CBS' hits "The Big Bang Theory" and "Two and a Half Men," both of which were shot with live audiences laughing along. Genuinely funny writing gets a boost from the give and take of people watching and laughing in the room where the actors deliver the jokes.

But then neither of these shows made mourning its central focus. Neither, for that matter, does CBS' contribution to the widowed dad subgenre "The Unicorn, " another laugh-track free single camera show about a handsome man played by Walton Goggins awkwardly navigating the world of dating a year after his wife died. (In the land of sitcom etiquette one year appears to be the proper amount of time that needs to pass between the point of deepest despair and readiness to return to shenanigans.)

In "The Unicorn" the quest to find new love supersedes overt grief – and to be fair, that could very well turn out to be the case with "Kenan," since critics were only given one episode to preview.

By this point in "WandaVision," though, we now recognize that profound, dark grief is the story's Big Bad. Anyone aware of the romance between Wanda (Elizabeth Olsen) and Vision (Paul Bettany) must have suspected mourning would take on a starring part in the series eventually, although opening episodes keep the audience in the dark as to what is actually going on.

Stylistically "WandaVision" time travels between the chipper fakery of 1950s and 1960s-style sitcoms, where the writer – i.e. Wanda– inserts managed laughter in places the audience recognizes as funny. Right away we're supposed to notice how disconnected the laughter is from the larger action, and as Vision's suspicions that something isn't right grow, the laugh track transforms into an unpredictable menace and increasingly out of sync with what is unfolding before our eyes.

Recent episodes parody comedies that don't use laugh tracks, namely "Malcolm" and "Modern Family," with its the fourth-wall breaking faux-documentary style. As the grave reality of the world presses in on her Wanda realizes her tenuous hold on the reality she believes she's created is falling apart – hence, no more disembodied laughter.

Wanda has something in common with Kenan in that respect – masking her grief can only help her hold it together to a point. Her only salvation now may be to face it, which is advice she's reluctant to take from the only other character in the show who also happens to be mourning someone she dearly loves, Monica Rambeau (Teyonah Parris). Rambeau's grieving leads her to take chances, and while one of those involves a reckless risk that could have killed her, it meaningfully transformed her instead – which some would say is grief's purpose.

We have yet to see whether "Kenan" similarly morphs into something better than it is by staying with its character's process and earning its laughs without help from recorded Pavlovian triggers. If it doesn't go the distance, the lesson it unintentionally imparts is worth remembering: When it comes to finding comedy in sorrow, nothing is better than artificial sweetener.

"Kenan" airs Tuesdays at 8:30 p.m. on NBC. "The Unicorn" airs Thursdays at 9:30 p.m. on CBS. New episodes of "WandaVision" premiere Fridays on Disney+. "Go On" is streaming on NBC.com. "Kevin Can F**k Himself" premieres this summer on AMC.