In Jewish horror film "The Vigil," a mythological demon manifests the trauma of antisemitism 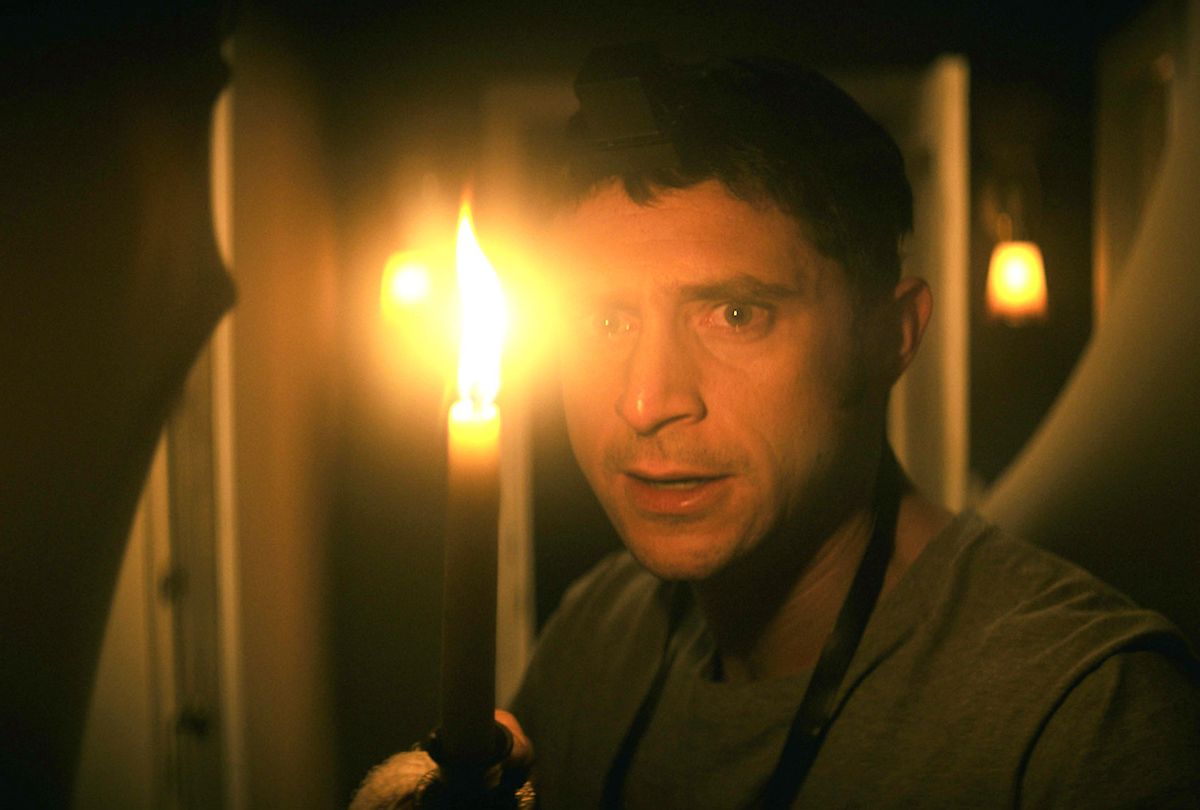 Jewish-themed horror movies are not unknown, but they are relatively rare. Certainly they are less common than those which rely on Catholic mythology or other forms of Christian folklore. One has to wonder if this is because filmmakers fear audiences are anti-Semitic: Jews in entertainment have long felt pressured to change their names so they sound less "ethnic" and, therefore, it stands to reason that producers may believe people won't like genre pictures that focus on Jewish culture. (The same principle would not apply to dramas about issues like the Holocaust, which are intended for an "artsy" crowd, but rather for those intended to be mass entertainment.)

I don't know this for sure, but it is a niggling suspicion I've harbored for some time. Fortunately, the rich ore of Jewish mythology has not gone completely neglected among horror filmmakers, which is a good thing because frankly there are a lot of terrifying entities in Judaic folklore. In recent films you have had malevolent ghosts called dybbuks, as seen in the David S. Goyer/Michael Bay film "The Unborn" (2009) and Ole Bornedal/Sam Raimi film "The Possession" (2012), and monsters made of mud or clay that come to life known as golems, most prominently featured in the Israeli movie "The Golem" (2018).

Now we have a mazzik, the supernatural baddie featured in "The Vigil." Written and directed by Keith Thomas in his directorial debut, "The Vigil" focuses on an invisible demon that Jewish mythology teaches will torment people in big ways and small during their day-to-day lives. It also incorporates a second feature of Jewish culture: The practice of shemira, or a religious ritual of making sure that someone watches the body of a recently deceased person from their time of death until they are buried.

Using these two elements, "The Vigil" is a straightforward tale: A lapsed Hasidic Jew named Yakov Ronen (Dave Davis) is asked by his friend Reb Shulem (Menashe Lustig) to be shomer (someone who performs shemira) over the body of a Holocaust survivor who died in Brooklyn's Hasidic Borough Park neighborhood, even though he is warned away by the deceased's widow Mrs. Litvak (Lynn Cohen). Before long, a mazzik begins to psychologically and physically torment him, actions that take up the bulk of the film's running time.

As a horror movie "The Vigil" falls qualitatively below a masterpiece like "Midsommar" but better than dreck like the "Pet Sematary" remake. There are a lot of nice touches here that make it intrinsically interesting. One is that the characters often speak in Yiddish, a language that was nearly extinguished during the Holocaust but is spoken in an increasing number of Hasidic Jewish communities. Another is the matter-of-fact way in which Jewish culture is explained to the audience; when Yakov says he is going to sit shomer, for instance, this is viewed simply as an ordinary reality rather than trumped up to be something ominous, demystifying it in a satisfying way. Thomas also wisely decides to rely on building tension and suspense for his scares rather than piling on the gore, which works well with this kind of psychological material.

That last point — that "The Vigil" aims to be psychological horror — deserves more unpacking because it is perhaps the most intriguing part of the film. In "The Vigil," the mazzik is an allegory for the trauma that Jews can bear after being victimized by anti-Semitism. This includes the horrors witnessed by acts of brutality and bullying, of course, but it is not limited to them. When facing discrimination, people often expose the weaknesses in their own characters — their willingness to do wrong to others, or their cowardice — and feel plagued with shame and guilt afterward. These emotions can literally torment their victims for years after the traumatic episodes have occurred and that is where "The Vigil" is particularly clever: In Thomas' story, the mazzik feeds off of that psychic pain to select its victims. It is an adroit way of allowing the supernatural theme to become a character study without seeming forced or heavy-handed.

"The Vigil" is not without its flaws, however. There are too many jump scares, and because the audience can see them coming from a mile away, they feel like padding rather than earned moments of fright. While Cohen does a great job as the creepy-but-sympathetic Mrs. Litvak, her character falls into another horror cliché: The side character who knows that the main character (or characters) is about to face a terrible evil, but only speaks in mysterious riddles rather than being direct. (I'm not saying I'd automatically believe someone if they told me that performing shomer for a specific body would mean that the demon that tortured him for 50 years would go after me, but the information would at least give me pause.) Then there is the problem with the film's climax. Though emotionally satisfying, it feels a bit rushed, and is one of those occasions where a denouement works on paper but the execution falls a little bit flat. It could have been fleshed out a bit more.

These aren't minor quibbles, but they also aren't reasons to stay away from "The Vigil." It is smart enough, scary enough and unique enough to be worth a watch both for horror fans and for people who want to see more Jewish culture represented on the screen. Thomas is obviously a talented director and, for an initial outing, this is a good start. Hopefully it will perform well enough to convince other horror filmmakers that Jewish mythology, like that of Catholics and other religious groups, can be used to make compelling cinema.

"The Vigil" is available in select theaters, digital platforms, and VOD on Friday, Feb. 26.