"Slalom" director on pushing limits & the abuse of a skier by her coach: "This film is about bodies" 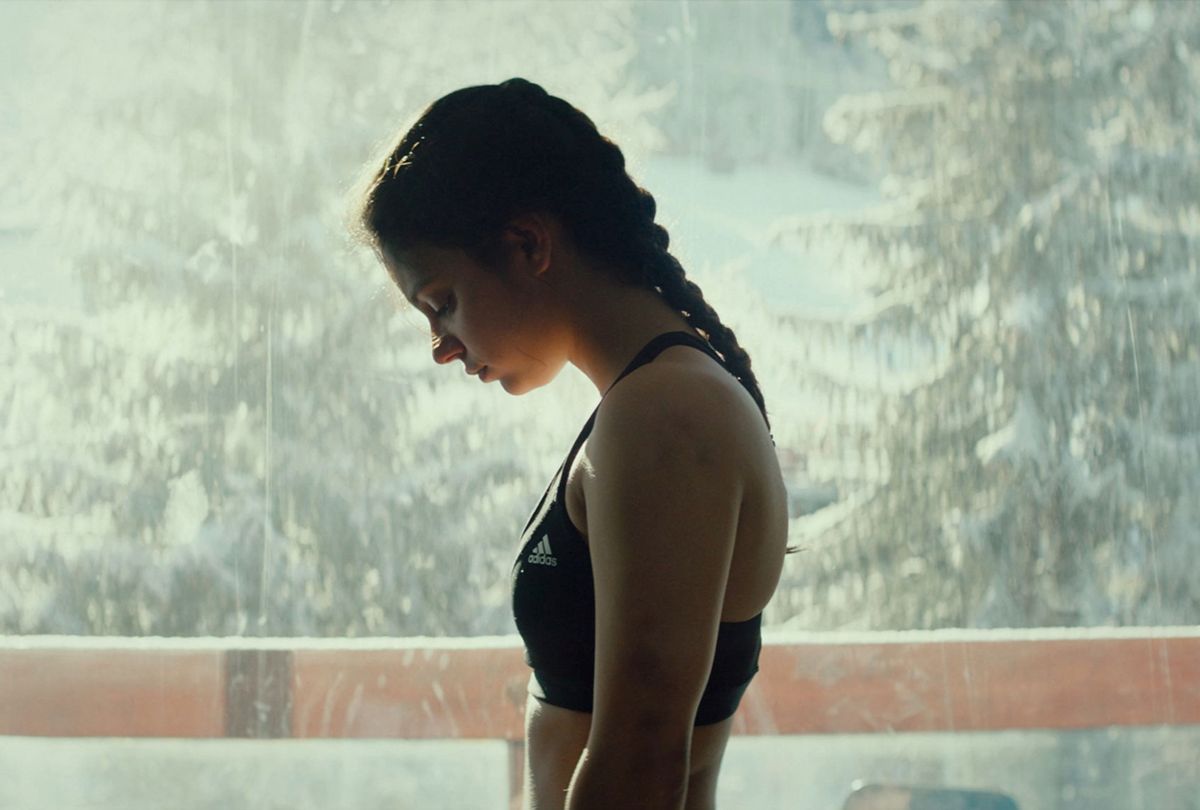 As Lyz acclimates to the program, she is told, "Fred crushes you, you listen, and you get better." The coach's methods are tough — he is demanding — and Renier makes Fred imperious both before and after he crosses the line. He is comforting when Lyz gets her period one day, but on another night, after Lyz wins a big competition, he sexually abuses her. And when Lyz's failing school grades become a concern, she moves in with Fred and his business and romantic partner, Lilou (Marie Denarnaud). The coach/skier's added closeness only make their sexual dynamic even more fraught.

"Slalom" is absorbing as Lyz faces additional pressures and balances the sport she loves and her burgeoning sexuality. Favier coaxes a strong performance out of Abita, who communicates (and masks) the pain she feels as she struggles to come of age, while Renier is both seductive and sinister.

The actor and filmmaker both chatted with Salon, with the assistance of interpreter Lilia Pino Blouin, about their intense new drama.

What can you say about avoiding clichés in making a sports and teen coming of age film?

Charlène Favier: I purposely turned the clichés upside down. Normally, the teenager figures out what they want to do in life after many problems. Here, it is the opposite. I wanted to show something that we never talk about in the sport world, the backstage of this competitive environment.

Did you look at other sports films, or was there a film you modeled this after?

Favier: I watched many films while I was writing the script, including Damien Chazelle's "Whiplash," but I was not inspired by film; I was inspired by my own story. This film was really personal. I had to write this story. My producer and my scriptwriter friends told me, "Do you realize you are writing a story about sexual abuse?" It was quite therapeutic. Sometimes you feel you have to tell something, but it takes time to analyze and understand what I was thinking. It was not a film I made because I'm a movie lover, it was a film I made to talk to heal myself. It's a different process.

Can you talk about the film's depiction of teenage female sexuality, which extends to Lyz's friends?

Favier: The sexuality is really interesting. It's in all my short films, as well, because it tells something important about the behavior between the people and the erotic tension that you can have — even when it's not on purpose. You have to deal with these feelings. It's something we don't talk about enough. Sexuality is an interesting dialogue between the body as well — not just about sex, but feeling, emotion — many different topics. I like to explore sexuality and see how the body reacts. The contradictions of what you want to do — and then doing the opposite. Your brain and body act differently. The sexual impulse is a mysterious war.

In "Slalom," I explore the limits and boundaries that are not clear between a trainer and a young athlete, but it's also true that throughout the film, all the boundaries of sexuality are weird. I explore that erotic tension between Lyz and Fred, but also between Lyz and her friend Justine (Maïra Schmitt), because Justine is attracted to Lyz and she doesn't know what she's feeling. Max (Axel Aurient) is attracted to Lyz, and I think she's attracted to him as well, but she's in love with Fred who has a grip on her. She can't live a normal love story with a guy her age.

Lyz and Fred feed each other's ego. I saw it as "Lolita" has Stockholm Syndrome. How did you find the humanity in Fred?

Jérémie Renier: He's not a monster; that's not how we saw it. I tried to understand him and his actions. The film makes him complex, going beyond the dichotomy between the monster and the victim. All the work we did was to understand how the characters got to that point, and my job was to understand what Charlène had in her head and to build that relationship. He projects himself in Lyz's success, which he didn't achieve in his own life. That projection is based on her performance, and at a certain point he switches and loses control. He's not a serial abuser. He doesn't have that in him.

Favier: I wanted to explore all of Fred's contradictions. At the outset, he is a good guy, who believes in what he is doing with his club and he wants to be a good trainer. And then he meets Lyz and starts living vicariously through her victories. This takes him back to his unhealthy [past]. I wanted him to show how he's fighting, and he does feel deeply guilty, and realizes, with tears in his eyes, "What have I done?" In this case, he is a man, but it could have been a woman. A lot of men seeing the film, can see themselves, and after some screenings, some trainers have told me, "I identified with him; that could have been me."

What do you think was the motivation for Fred kissing Lyz in the car, initiating physical sexual contact, and later escalating his inappropriate behavior?

Renier: That is something we reflected upon for a long time. I was really troubled when I read the [sex] scene and needed time on how to approach it, and find my bearing, and how to play it. In that particular scene, he switches and [is inappropriate], and we needed to see what Lyz was feeling and what my character was going through. He was taken over by an animal feeling, and he does what he does, and after that, he understands what he has done, and he gains consciousness and awareness.

Favier: I had this scene in the car in my head from the beginning. Some producers said I had to avoid this sequence, but it was important to me. It's not the first kiss of an abuser; he is in love with her. He modeled her and molded her. His feeling is, "I have a champion in my hands. I made her. It's magical and incredible." That she's 15 and he's 39, 40, just disappears. It's about limits and stretching those limits. In sports, that happens a lot. People spend all that time together. It is slippery in terms of love. But he believes he's in love. The film then switches tone and a line is crossed. He can no longer control himself. His masculinity is unbridled, and he cannot stop. I have a close-up of her dirty hands, and I focus on those child-like hands. At that point, he does feel a sense of guilt. He tells himself he's gone too far. We enter into a whole new dimension. Even the colors and vibe change and we go from it being a fairy tale to a waking nightmare. You see a psychological component to [this abuse], which Fred is not fully aware of. In the sports world, the training is based on destabilizing, and what the other person will be able to put up with, and what they can tolerate. Liz is questioning her relationship with pain. It's about losing one's bearing and pushing one's limit.

Do you think Fred feels invincible or self-destructive?

Renier: As a coach, he has a strong character, and he wants to set a pace for his team and impose a vision. I tried to find the humanity in his actions. I lived with coaches in the ski world for a few weeks and I familiarized myself with the way they spoke and moved. That nourished this character. I wanted to figure out where he came from. Coaches are often former athletes who didn't succeed so they do harbor frustration that they tend to take out on the kids.

What about Lyz's self-destructive tendencies? Surely, the pressure she feels contributes to her actions?

Favier: You have two factors. The first is the teenage period when you don't know what's bad or what's good, and you test your limits. This hurts, or this is not hurting me, I can do more. When you are a teenager you are looking at your limits in every field. Teenagers self-harm to see what it is like and to see how far they can test their limits. Fred also plays with her in a psychological way, telling her, "You are the one," or "You are s**t." He's changing his behavior and being very contradictory. She is lost and doing everything to please Fred. She is ready to self-harm so he can be happy with her. She no longer knows what constitutes harm and what doesn't.

Can you talk about filming bodies — both the sexuality and the athleticism?

Favier: The film is about bodies. There is very little dialogue; the bodies themselves talk, and they come closer to each other, or they reject each other, or they tighten up. It's all about erotic tension of the body, and the physical effort is connected to testing one's limits. She exerts herself no longer for herself but to meet his desire and do what he wants her to. He takes that away from her, and we no longer know what she wants to do, or what she does because of what he expects from her. I was always so close to Noée, and the camera follows Lyz's gaze. The film is through her point of view. It is through her that we discover his body, and the camera truly follows her feelings and emotions closely.

Renier: Talking about the body, it speaks to me a lot as an actor, because it is a tool I use a lot. It's a component of my job. I use my body, I modify my body, and I put it at the disposal of a character and a filmmaker. We spoke about that quite a lot. The world of sport hinges on the body, and it's natural for people to get naked and touch each other. People deal with their bodies [differently] in the athletic world. But the way the film was shot, there was nothing negative about it. They were bodies meant to do extremely successful things and they are stretched to the limit. That's what athletes do, and actors do pretty much the same thing.

How are you as skiers? I notice that Jérémie never was on the slopes.

Renier: Of course! I'm the best skier in the world! [Laughs] I ski and snowboard.

Favier: Noée had never skied before. We shot a short film a few years back, and at the end of the shooting of the short, I asked her if she skied, and she told me she did. Two months before shooting "Slalom," she told me she lied. We used body doubles for her, but she had to learn all the physical behavior of skiing. I pushed her to go with me and a specialist to learn. She had to watch ski videos and did some cross-country skiing to feel the glide.

I am a skier. I grew up in Val d'Isere, a ski resort. My mother is a ski instructor. Skiing is really important in my life, as are all of the winter sports. I'm also a surfer. I find that slope sports are really visual. There is an intrinsic tension which becomes dramatic instantly, because the body is gliding down the slopes. It is also connected to self-destruction, which is natural in teenage years, when you don't have fear. And the environment of the mountains in Val d'Isere is very cinematic.

"Slalom" is released as part of the Rendez-Vous with French Cinema, March 7-12 and available more widely on April 9.