In the joyfully violent "Nobody," Bob Odenkirk channels his inner John Wick 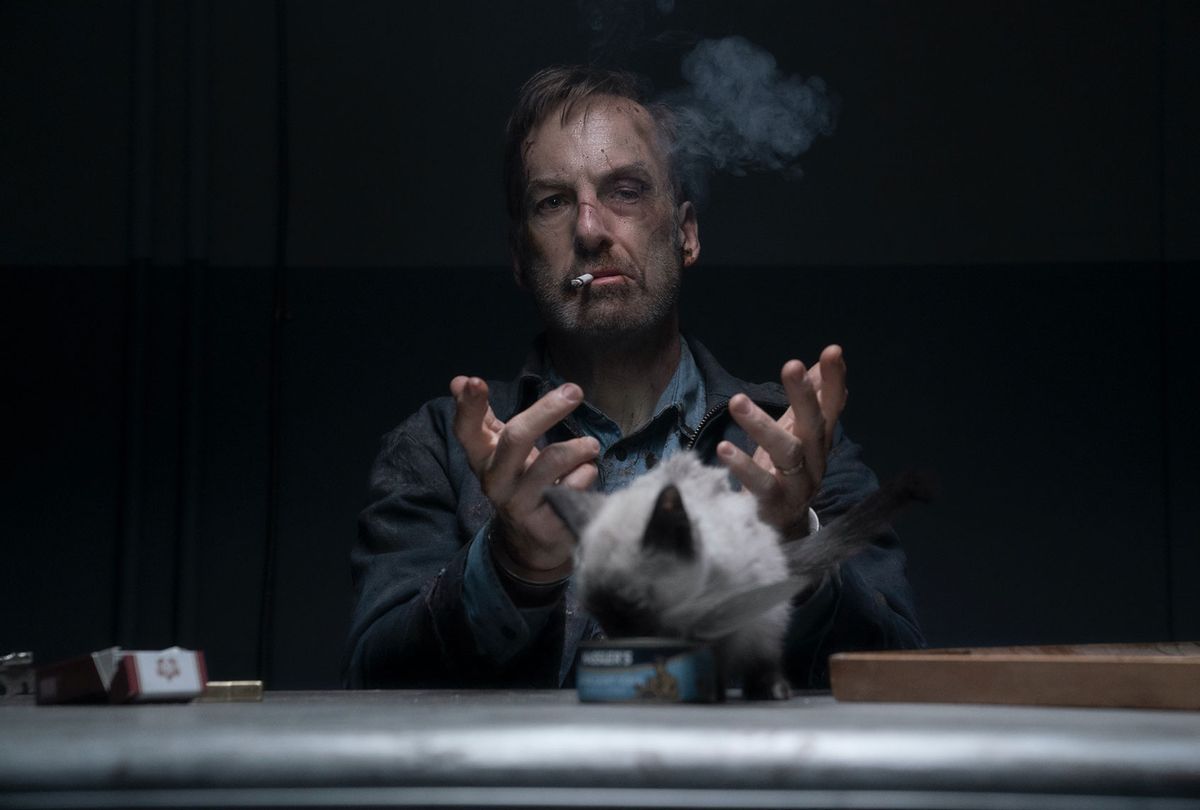 Bob Odenkirk in "Nobody" (Universal Pictures)
--

"Who the f*ck are you?" an officer asks, incredulous, watching as Hutch (Bob Odenkirk), his face scratched and bloodied, lights a cigarette, opens a can of tuna, and feeds the kitten snuggled in his jacket — all while in handcuffs. Hutch is in a police station being interrogated about something that will eventually be revealed. He answers, "I'm . . . " before the title card "Nobody" flashes up on screen.

Written by Derek Kolstad ("John Wick," which it resembles) and directed by Ilya Naishuller ("Hardcore Henry"), "Nobody," is an aggressive sleeper — one of those little films that comes out of nowhere and surprises viewers. Perhaps it isn't surprising given that this darkly funny action film is about a mild-mannered family man who escalates to a "whole other level of recklessness" following a series of unfortunate incidents.

Odenkirk is perfectly cast as the title character, who is really less meek and more Jason Statham than folks might expect. The whole film may be an extended riff on this one joke, but it is a pretty funny joke. When two burglars break into his house one night — a pizza box in the garage door gains them access — Hutch is reluctant to take them out with a golf club, despite having the perfect opportunity to do so. "I wanted to keep the damage to a minimum," he demurs when asked why he exercised restraint. Given his house is destroyed later, that is a sarcastic understatement.

Turns out the robbers got away with only a few bucks cash, but also, possibly, a prized possession belonging to Hutch's young daughter Abby (Paisley Cadorath). This prompts Hutch to track down the perpetrators and demand, in arguably the film's most quotable line, "Give me the goddamn kitty cat bracelet, motherf**kers!"

But Hutch's night is hardly over. On his way home, via the bus, he has an encounter with five Russians. Hutch does tip viewers off that things are going to get ugly when he utters, "I hope they like hospital food," and then he proceeds to dispatch the men in a series of increasingly nasty confrontations. "Nobody" does not shy away from showing pain, and viewers will wince and laugh at the same time at the film's gleeful, comic-bookish violence. Watching Hutch smash the windpipe of Teddy Kuznetsov (Aleksandr Pal) is horrifying, but it is hilarious that he is considerate enough to give his victim a tracheotomy so as not to have him die. Hutch even apologizes to the bus driver about the mess.

Unfortunately, Teddy is the younger brother of Yulian (Alexey Serebryakov), a "connected, funded, sociopath," who kills a man to prove he is badass and throws chairs at people when he wants answers. Yulian is pissed his brother may not walk again and demands justice. What transpires is a heavy duty pissing contest.

"Nobody" quickly devolves into a series of extended step-and-repeat set pieces where Hutch single-handedly takes on a handful of Yulian's bloodthirsty bad guys. These scenes provide a video game vibe — especially when Hutch is supine, driving backwards, into traffic in a white '72 Challenger with a 4.9 liter V8 engine. But even the most over-the-top scenes are fun to watch because Odenkirk's expressions are so dryly amusing. He generates chuckles just setting fire to cash.

Consider a scene where Hutch enters a tattoo parlor and flashes some money to garner the attention of the staff. They threaten him, save for one wise old dude who hurries out, locks the door behind him, and wishes everyone else good luck. The film is full of these kinds of throwaway moments, such as a scene where Hutch's father, David (Christopher Lloyd) manages to handle a situation that arises one night in his nursing home. It may be broad humor and violence, but Lloyd carries it off with his characteristic panache. Alas, too little is made of Hutch's brother, Harry (RZA), who is first heard as a disembodied voice, but later helps Hutch in his battles.

The film does take a moment to stop and think as when Hutch tells his wife, Becca (Connie Nielsen, largely wasted) that he wishes things were different, and better, between them. And he gets a decent speech when he recounts a story from his past in Italy to a trio of men who tried (and failed) to kill him. Odenkirk seems to relish his mercurial role and his joy is infectious.

This brisk, efficient film is set to a catchy soundtrack. and it is fun, albeit contrived, to hear "I've Gotta Be Me," or "The Impossible Dream," as Hutch takes care of business. Alas, "Nobody" risks viewers becoming either buzzy or bored as it lunges from one action sequence to the next. The film's final, epic, fire-powered showdown is either satisfying or stultifying.

"Nobody" opened in theaters March 26 and is now available on demand.