Delroy Lindo on his "Da 5 Bloods" pro-Trump role: "He felt reviled because of his love for America" 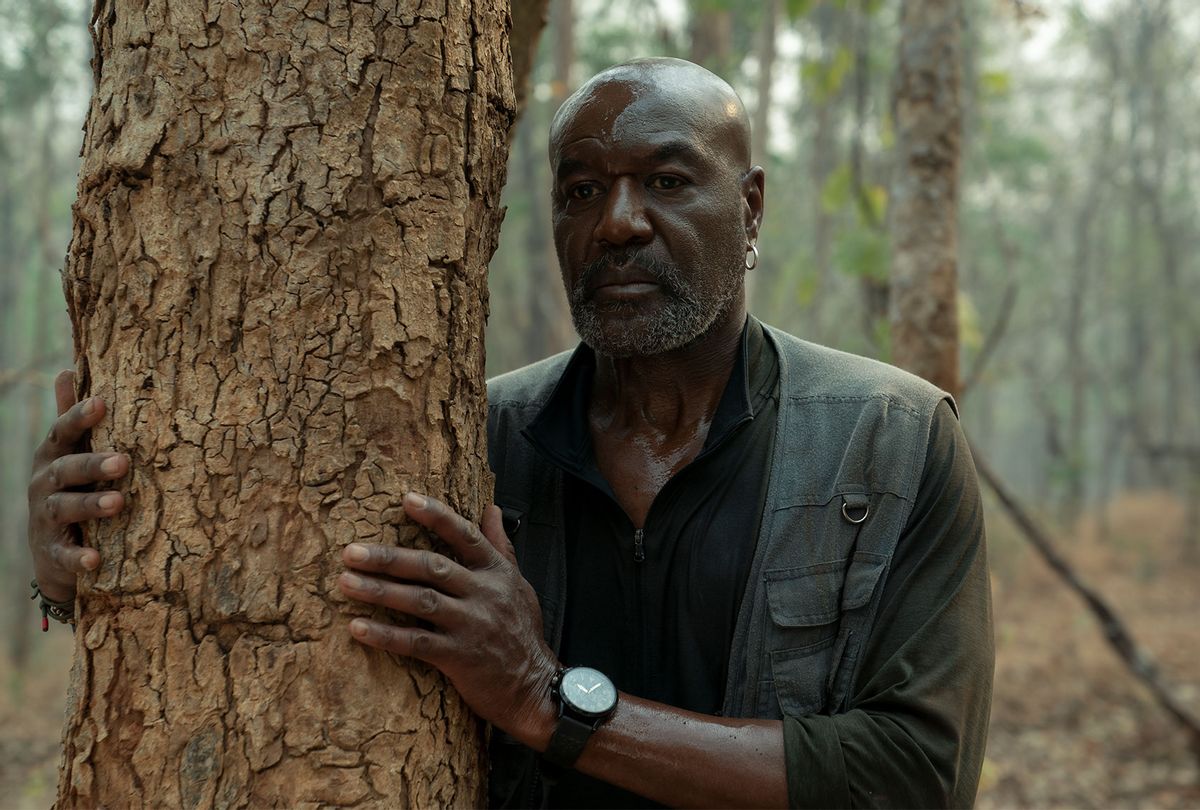 In Delroy Lindo's six-decade career, the actor has appeared in dozens of films, TV shows, plays, and films, including such notables as Spike Lee's "Malcolm X," "Clockers," and "Crooklyn." He also currently plays Adrian Boseman on CBS All Access' acclaimed series "The Good Fight."

His most recent film is Lee's Vietnam vet drama "Da 5 Bloods," in which he portrays a Black Trump supporter named Paul. The actor earned critical praise for the role, which in turn sparked outrage when he wasn't nominated in the best actor category for this year's Oscars. Lee was so incensed by the snub that he even posted an appreciation for the actor on his Instagram. Meanwhile, "Da 5 Bloods" has also earned NAACP Image Award nominations for best motion picture and best actor for Lindo.

He is a previous recipient of an NAACP Image Award and has also been nominated twice for the Critics' Choice Television Award, three times for Screen Actors Guild Awards and a Tony.

Lindo is a well-known if not iconic actor. He is not a "star" in the sense of someone who is famous because he or she is famous – an ephemeral persona, who by definition exists outside of real life in that unreal and surreal space of "fame" and "Hollywood."

Lindo is authentic. His energy is that of a grounded and serious person. He is also a truth-teller, which has come at no small cost. This is an extension of his upbringing, humanity, and overall life experiences as a Black man, member of the Black Diaspora, and global citizen.

Lindo spoke to Salon in early March (and therefore could not address the egregious Oscar snub) to reflect on his career and life. In the conversation below, he shares how this pandemic time is a test, the importance of personal grace and gratitude, the responsibilities that Black and brown cultural workers have, and how radical empathy informed his performance in "Da 5 Bloods."

We are in an age of death and other crises all over the world. How are you feeling? What of the day-to-day?

What I try to do, and this may sound kind of pious, but I really truly try in my day-to-day life and meditate on how very fortunate I am. It's a balancing act to not surrender to COVID fatigue. But I really try to keep at the forefront of my mind how there are hundreds of thousands of people across the globe who are far less fortunate than myself, that my personal circumstances, no matter how challenged they may be, are a lot better off than a lot of people. At the end of last year, I went to do a film. It was tightly controlled. We were tested three times a week. We were shut down a couple of times. But between the time that I got to Santa Fe to start working, which was early September, and the time that I actually wrapped the film, which was a week and a half or so before Christmas, I was working. I was gainfully employed in the middle of a pandemic in which millions of people have lost their jobs.

And here I am, gainfully employed in an industry, which at the best of times, there is only a small percentage of people who are working. I'm really trying very consistently to count my blessings and those of my family.

This moment is a test for people. They are learning about their relationships and the true nature of their character. I wonder what folks are going to do with that knowledge doing forward.

We have learned about ourselves. And we are learning about ourselves in real time. I am trying to channel the energy of gratitude for all that I have in life such as my friends, family, and other people.

The abstract idea of being a star is someone who transcends and in a way is immortal. The deaths of Hollywood stars and other prominent entertainers seems to be hitting people particularly hard now. People don't live forever. But it seems that this season of death and suffering is making the public especially sensitive to the deaths of their favorite celebrities. There is also the flip side to living through a season of death, which is that people can also become numb to it all.

There is an acute awareness of death, absolutely. But the flip side of that is an appreciation and an acute and heightened awareness of life. I've got to stay there, in that space and energy. First of all, I'm a parent. So there are certain things that I don't have the luxury of indulging. Because I've got to be there for my son. Period. The end. I have to be there for my family. Period. The end. Of course, there are challenges and obstacles. But one makes the best effort that one can to be present. And in my case, part of being present is not indulging those things that I might have if I were 30 and single.

How are we going to live our lives? Who are we in the face of all of these challenges with the pandemic and what it has wrought?

You mentioned the idea of stardom.

I really can only speak for myself. I am trying to keep myself balanced in my life and in this world. It comes down to the position that each individual adopts vis-à-vis the society that he or she is a part of. I've had some fantastic teachers, frankly. Danny Glover is a very good friend of mine.

What I've always said about Danny is that he, for me, is a remarkable example of somebody who took his stardom and turned it, not into an abstraction, but turned it into a tangible entity in terms of his activism, his willingness, his desire frankly to speak truth to power and how that impacted the way in which he walked through the world. Yes, he did that as a celebrity but also as a concerned citizen of the world. I'm not going to tell you that I agree or have agreed in the past with all of the choices that Danny has made, because I have not.

However, that is beside the point, frankly. Because Danny is living his life in the way that he feels is appropriate for him. My larger point has to do with the fact that, as a friend and as a colleague of his, Danny is someone who has put his money where his mouth is. He has stepped up to align himself with causes that he believes benefit the larger society and his fellow human beings. That has been incredibly instructive for me. It comes down to individual choices that we all make. And God forbid that I should have to leave this world tomorrow, and then answer, "What did you do with your life? Who did you impact? How did you conduct yourself?

We are a product of our teachers and the other people in our lives.

In losing Chadwick Boseman so tragically, I have had to respond to the inevitable questions about him from journalists. I will say that in his passing, I immediately had and have a heightened appreciation for who he was and what he was about. With his passing away that loss has translated into my need to tell everyone how much I appreciate them in the here and now.

Who are we in terms of life and death? Especially in this pandemic? My mandate to myself is to be as real as I can, be as present as I can, and even though it is not always possible, be as genuine and honest as I'm able to be. And that is not an easy thing. I'm not saying that I achieve that all of the time, but certainly that is part of my mandate to myself.

What has your candor cost you professionally? Personally? The truth comes with a cost.

It has cost me professionally. There have been personal costs as well but that is something different. From a professional standpoint, I have had to learn – and frankly, it was a long time coming – that you can't tell everybody what is in your heart. You can't. I have to be extremely discerning with myself in terms of who I share parts of myself with and who I do not share parts of myself with. How I communicate.

One of the throughlines in all your roles is dignity. For example, your role as West Indian Archie in "Malcolm X." As a serious student of film, I have a Rolodex of great scenes in my mind. The arc of West Indian Archie, where at the end you are broken and vulnerable and sitting in the room of a welfare hotel, unable to move because of a stroke, was so powerful and riveting. Just amazing vulnerability. Such vulnerability takes great personal strength and confidence. How do you channel that energy?

What's interesting about the question is that one does not set out to be dignified. I set out to investigate the truth of whichever character I'm playing. And if you set out in an authentic way to seek the truth inside the work and the truth inside the character, then I think that that in turn engenders an empathy and openness to the process. That also applies to the openness to the narrative and openness to the character that you're playing. I believe that if one is able to achieve or investigate those things there is some kind of dignity inherent in that process.

How did you convince yourself to play a Black Trump supporter in "Da 5 Bloods"? I could not play such a disreputable and pitiable person. But then again it would be a great challenge in terms of acting as well, so in that way it could be also compelling.

That aspect of Paul as a Trump supporter was a stumbling block for me.

How did I approach that question with Paul? The value in Paul's support of Trump for me was that it compelled me, it forced me through a process of discovery and creativity to understand Paul and the depth of his loss. The depth of his disenfranchisement. The depth and the breadth of the various things that he has lost.

The violations that he suffered created an individual like Paul, a Black man, who is disconnected and disassociated from the community that he is a part of. Paul is disassociated and disconnected from himself and disenfranchised from America. That was the value of that journey for me playing that character. I very clearly understood that when Trump came along in 2015 saying such things as, "All of you all who are disenfranchised, who feel left out" – and Paul is one of them – "I can make it better for you all. I'm going to take care of you all." Trump was speaking to people like Paul.

Paul needed to believe. He is at a point in his life where he needs a win. Think about this, he lost his wife in childbirth. Paul is estranged from his son. Paul blames his son for the loss of his wife. Paul volunteered for three tours in Vietnam. He loves America but when he came back from the war he was spat upon and called a "baby killer." He felt reviled and rejected because of his love for America. Those experiences helped to create Paul and why he cast a vote for Donald Trump in 2016.