"He is sending a message": Jen Psaki explains to Fox News reporter why Biden continues to wear masks 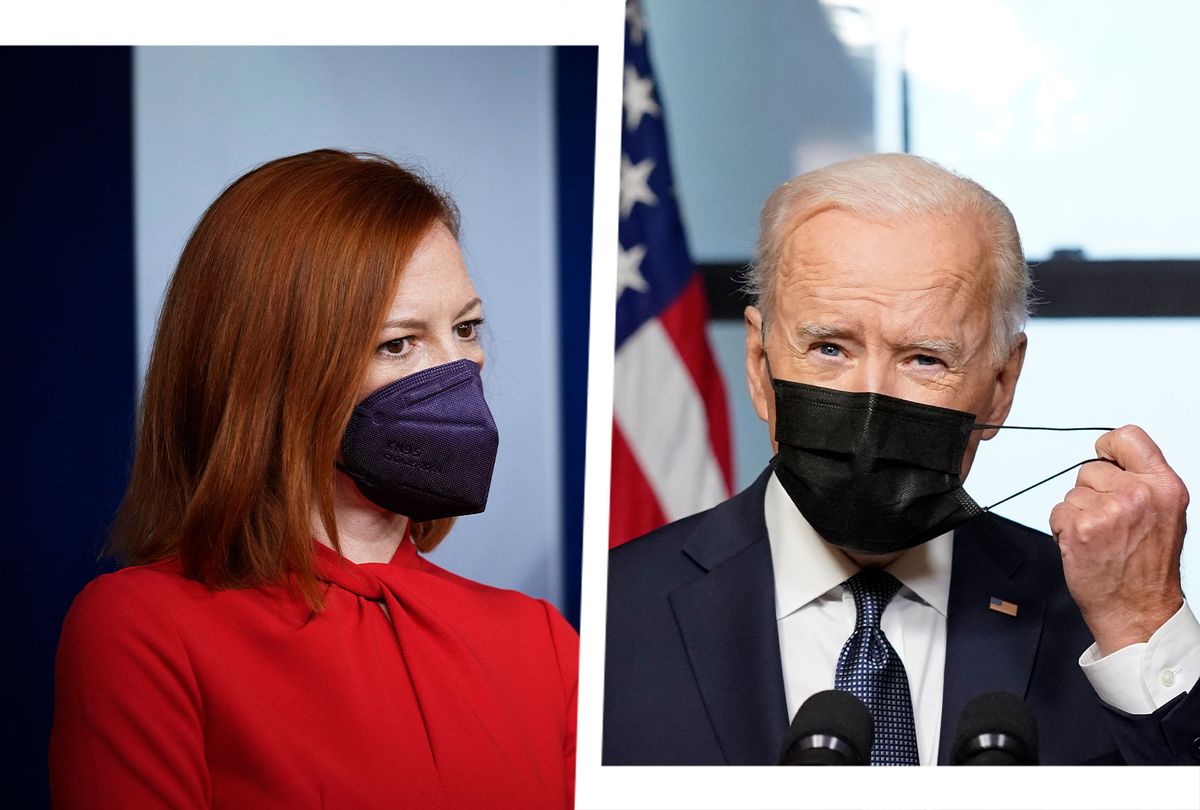 The schooling began after Psaki was asked by Fox News' Steve Doocy about why the president was seen wearing a mask during a recent climate change summit that was held virtually.

"Because he is sending a message to the world that he is putting in place precautions and continuing to do that as leader of the United States," Psaki explained Doocy. She added that she did not know how other countries had set up the call on their end but that there were other personnel in Biden's room when the call occurred in the White House.

Doocy replied by without context claiming that the Centers for Disease Control and Prevention (CDC) says "you can gather indoors with fully vaccinated people without wearing a mask or staying six feet apart."

Psaki corrected Doocy, telling him that "that's actually for in your private home. So it's not workplace guidance and we still masks around here, just like you are all wearing masks. And we wear masks in our offices and continue to abide by that until that guidance changes."

The Psaki-Doocy exchange occurred within a broader context about the Biden administration's policies on Americans wearing masks. When Biden delivers a speech to a joint session of Congress on Wednesday, he is expected to be flanked by two public officials wearing masks — Vice President Kamala Harris and Speaker of the House Nancy Pelosi. Other people attending the speech are also expected to wear masks.

Journalists have also been told to anticipate an announcement this week on mask-wearing protocol. NBC News reports that they are planning on loosening guidelines for wearing masks outdoors and perhaps even offering even more latitude to people who are fully vaccinated. Officials have not yet finalized the new rules, but they are expected to continue the Biden administration's overall policy of gradually transitioning to normal life while remaining guarded.

There has been considerable opposition to wearing masks as a way of limiting the spread of COVID-19, even though scientists agree that they're helpful and harmless. Biden's predecessor, President Donald Trump, frequently downplayed the need to wear masks and denigrated Biden himself for doing so on the campaign trail. Trump encouraged his supporters to ignore a number of basic scientific facts about addressing the pandemic, while sympathetic media outlets like One America News Network (OANN) and Newsmax have directly promoted anti-mask pseudoscience or provided platforms for those who do. There is evidence that men may avoid wearing masks because they fear it is emasculating; there is also evidence in general that conservatives will lash out at right-wing outlets when they urge mask-wearing, as happened with Fox News viewers last month.

As a result of this politicization of mask-wearing, Republican governors in states like Texas and Mississippi are eliminating mask mandates and rolling back other COVID-19 precautions. CDC Director Dr. Rochelle Walensky admitted to reporters last month that the premature decision to pull back on some of these protections could cause the pandemic to surge.

"I'm going to pause here, I'm going to lose the script and I'm going to reflect on the recurring feeling I have of impending doom," Walensky explained at the time. "We have so much to look forward to. So much promise and potential of where we are and so much reason for hope. But right now I'm scared."

Salon has spoken with public health experts who share her concern.

"The decision to reduce mask wearing and reopen business anywhere in the US in extremely unwise and in fact dangerous," Dr. William Haseltine, a biologist and chair of Access Health International, told Salon by email earlier last month. "Twice we reopened prematurely and have suffered grievously in terms of numbers of dead and of those who are suffering from long-term COVID-related disease."

His views were echoed by Dr. Alfred Sommer, professor of epidemiology at Johns Hopkins University, wrote to Salon.

"From a public health perspective it makes zero sense to abandon pandemic precautions at this time!" Sommer told Salon last month. "Only a small percentage of our population has been vaccinated as yet — we won't have herd immunity that would materially reduce our collective risk until 70+ percent have been immunized. Nothing has changed that should embolden relaxing our guard at this point."

Biden's response to the pandemic has been praised by public health experts. In his first week as president he implemented a federal mask, reentered the World Health Organization (WHO), used the Defense Production Act to get more Americans vaccinated faster and signed almost a dozen executive orders related to the pandemic. Salon spoke with public health experts at the time, who gave the president at least an 'A' based on his performance.