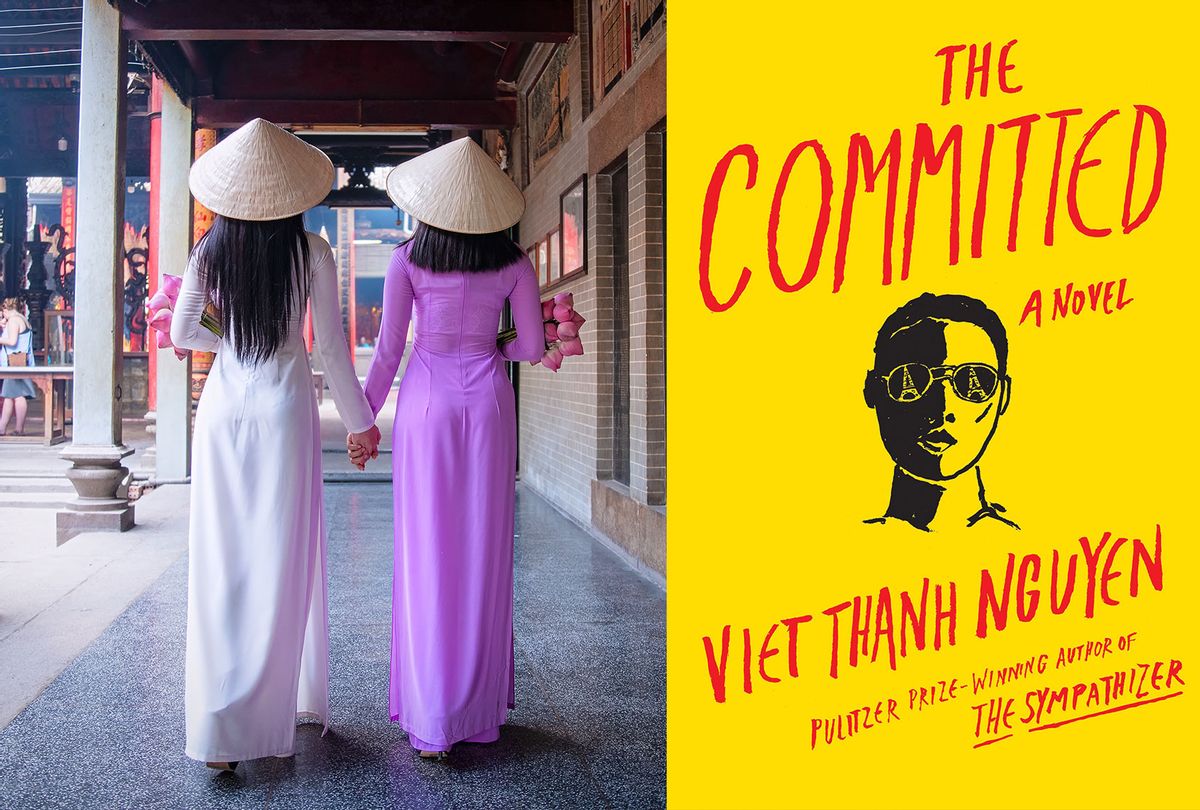 Near the figurative and literal climax of "The Committed," Viet Thanh Nguyen's sequel to his Pulitzer Prize-winning novel "The Sympathizer," a motley elite –– politicians, businessmen, a priest, and other white men privileged in the novel's 1980s Paris –– meet at a luxurious building. With the help of cocaine and copious quantities of cash, they offer bids to enjoy the goods at hand: a Chinese-Singaporean sex worker wearing a floral skirt and a flower behind her ear like an inhabitant of Gauguin's Tahiti; a Cambodian wearing a Vietnamese áo dài, a tailored tunic and pants set . . . but without the pants.

The mismatch between the women and their costumes is precisely Nguyen's point: the Western gaze exoticized and eroticized women of color in colonial times without regard for their individual identities. That phenomenon persists today with sometimes deadly consequences, as seen in the March murder of six women of Asian descent at spas in Atlanta. Police said the white shooter saw the women as "a temptation for him that he wanted to eliminate," a phrase that succinctly captures the dually desirous and dominating attitude of the heterosexual white men portrayed by Nguyen in "The Committed." The literary thriller, which follows an ex-double agent's adventures throughout Paris's criminal underbelly, explores the double consciousness of postcolonial people and the ways they can either hurt each other or help each other gain liberation.

"Here are some of the finest girls from the whorehouses, fleshpots, and slave markets of the great Orient and Africa!" says an emcee presenting the women available to the white patrons. "Here you are the sultan, the despot, the colon, the white man exploring the dark continent with a whip in your hand. There are mysterious ladies to be conquered, from this passionate Viet Cong guerrilla in her black pajamas, fresh from the jungle, to this Palestinian freedom fighter just returned from hijacking a plane."

While the images of the orgy are outrageous, Nguyen in fact took inspiration from historical images in a 2018 French coffee table book called "Sexe, race & colonies," a collection of more than one thousand images of sexualized colonial subjects selected by academic researchers. At the time of its publication, the book ignited debate. While the book's creators said the 544-page tome was meant to reveal how the colonial imagination fetishized women across multiple continents and periods, others argued that such images should be housed in academic archives rather than glossy paper, where they would be elevated to the level of art.

Perhaps the book's market value points to the debate's winner. The year of its publication, it retailed for €65 ($79 U.S.); today one Amazon seller asks for £2,273 ($3,170) . (To view a galley, I contacted the publisher, who directed me to lead author Pascal Blanchard. He replied, "Never !!!" but added I could likely buy a copy for €700 or $849.) A taste of what the book contains can be found on the website of its collaborators: a 1944 photograph of a "hula girl" on the lap of a sailor, a 1908 postcard of a Laotian dancer clad in just a skirt, and an 1894 poster of a Lyon expo on which looms the body of a dark-skinned woman whose breasts are strung with beads.

What about the general? I couldn't find past his belly.

Well, I found it, darling. It looked like raw hamburger.

In this small moment of humor, the women are transformed from physical objects into actors with a violently powerful gaze: a man's penis is metaphorically minced. This method of seizing agency is logical in the novel's hypermasculine economy. Outside the fictional universe of "The Committed," however, Asian and migrant sex workers at groups such as Canada's Butterfly and the U.S.'s Red Canary Song are organizing, both before and after the Atlanta shootings and the increased policing of Asian spas. They are writing their own lines.