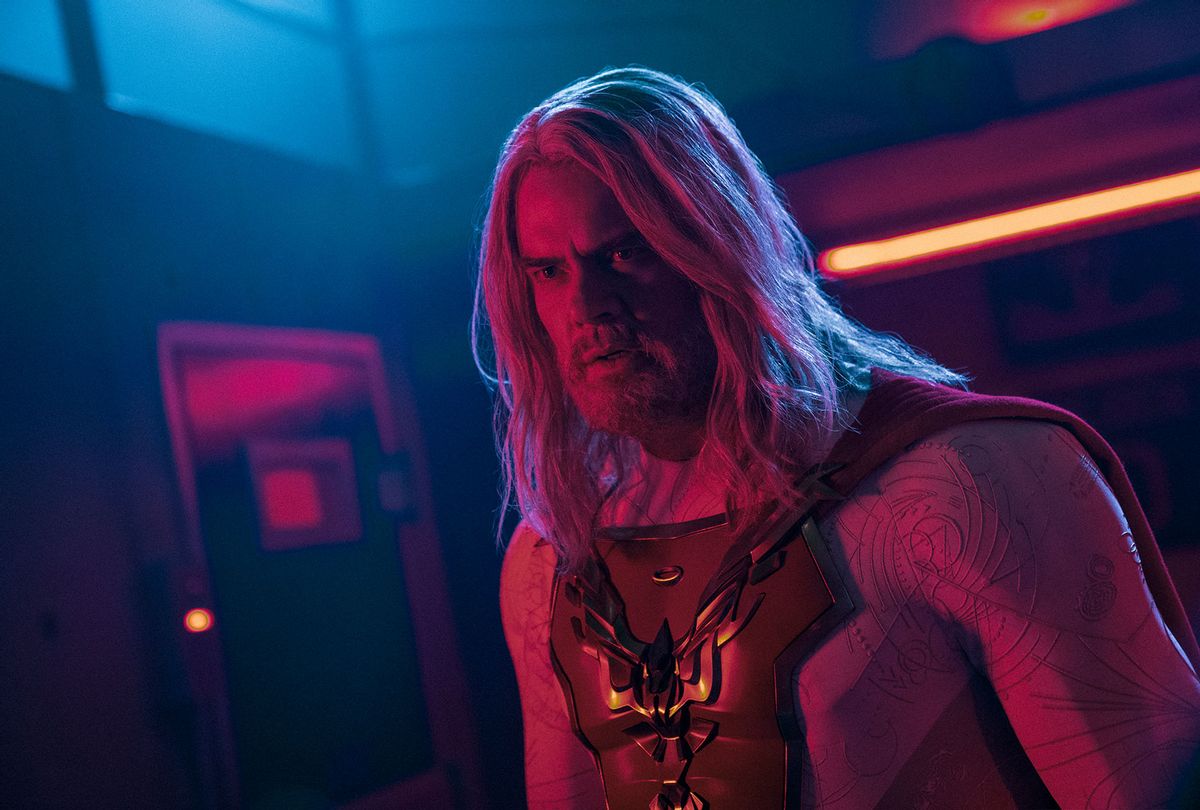 At the height of '80s consumerist decadence, few items sold the illusion of wealth and upper-class aspiration like luxury perfume. But the top-selling department store scents were unaffordable for most people, which is where Designer Imposters found its market.

These chemical-loaded imitations weren't perfect clones of the real deal but they were passable. Drugstore shoppers and Seventeen magazine readers quickly came to recognize the peppy promise that "If You Like Giorgio, You'll Love PRIMO!" and either buy into it or joke about it.

Versions of these knockoffs are still stocked in drugstores although snootier noses can tell the real deal from an Imposter and may gag at its very mention. Therefore, please understand the mixed implications calling "Jupiter's Legacy" the PRIMO! of superhero shows. Not Axe Apollo. Not even Bod. PRIMO!

Its creators and Netflix presume that if you like what Disney is doing with the "Avengers" movies or stanned the Snyder cut, you're likely to at least check this thing out . . . and if you watch for a few minutes, that counts as a view. But be warned – despite employing a conceit that is by now the clone of a clone's corpse, plenty of folks will ignore that base note's stank and see it through. It's only eight episodes, right?

Pounding a flamboyantly mediocre show with King Kong's ferocity and enthusiasm of Gorilla Grodd is easy to do, and it would be a dishonest lass to claim it isn't fun. Nevertheless, in observance of the Code guiding the Union of Justice – this show's version of the Justice League or the Avengers or the Seven or the Guardians of the Globe or the Decency Squad  – I'll hold back from straight murder.

Respecting the governing efforts of the writers constructing "Jupiter's Legacy" also seems fair, since by all accounts they've made a passable version of a show that looks like it belongs on a broadcast network that no longer exists. That's neither their fault, nor a crime. We miss the WB too.

Besides, who doesn't enjoy Josh Duhamel and Leslie Bibb? They're swell as Sheldon and Grace Sampson, co-leaders of the Union and known to the world as The Utopian and Lady Liberty. If you like Superman and Wonder Woman and want to picture what it would be like if they smashed, then you will love these two.

Bibb's Grace and Duhamel's Sheldon combine to create a serviceable mom and dad and apple pie archetype, and to keep things interesting Sheldon's brother Walter (Ben Daniels, respectable here) also holds a slot at the head table of the Union. His alter-ego Brainwave has similar psychic powers to Professor X but carries himself like Magneto. His former employee and partner in crimefighting, Fitz Small (Mike Wade), was a white guy in the comic books, but is cast as Black here. He emits energy from his hands.

Yes, the gods of Marvel and DC meet in this family superhero business, where mom and dad are as strong as Atlas in addition to being nice observant Christians who say grace before Sunday Supper.

This show also has a thing about delineating the passage of time with a changing of the beards, with Duhamel sporting various lengths of chin shag. Present-day Sheldon's New Testament outlook is out of step with his shoulder-length Old Testament conk, but what really lets us know that The Utopian is grizzled is the house finch sanctuary obscuring the lower half of this face. Between that and his penchant for fighting in his pajamas, he answers that eternal question of WWJDIHGU: What Would Jesus Do If He Gave Up?

There are a few reasons to root for "Jupiter's Legacy" notwithstanding its wince-worthy shortcomings. Duhamel and most of the cast turn in decent performances, especially considering the material they're working with. Matt Lanter cuts a suitable jerk as Sheldon's best friend George, who remains a wealthy bastard long after the stock market crashes and flies at his side as Skyfox. But he's outshone by Ian Quinlan as Hutch, George's son and the only character written to fascinate or thrill. I'd watch a spinoff starring Hutch as long as Quinlan's playing him.

Showrunner Sang Kyu Kim, who took over for executive producer Steven DeKnight, juggles parallel plotlines well enough, fleshing out the Union's 1930s creaky origin story concurrent with the modern plot featuring what's left of the original squad. Past being prologue and all, the yesteryear narrative progresses more straightforwardly than the scattershot contemporary segment, which is at once a soapy character drama and tale of intergenerational conflict between the overbearing Utopian and his son and presumed heir Brandon (Andrew Horton), known as Paragon.

Brandon is the scion of whom Sheldon expects too much, while his estranged, drug-addled daughter Chloe (an irritating Elena Kampouris) is a lost cause. When one of the Union's own superheroes breaks the "do not kill" Code, these new recruits find themselves at odds with the old-fashioned ethics and morality guiding the old guard.

Hiding beneath all this posturing and tween-channel family drama angst is a worthwhile critique or five concerning the perils of American nationalism. Whenever characters discuss the hollow, unachievable nature of the cultural myth falsely informing our sense of exceptionalism, a theme driving Mark Millar's 2013 comic book series, the show hints at evolving into something more profound.

That growth spurt does not occur this season, and glimpsing seeds of these notions scattered throughout makes their insufficient germination frustrating. Or it could be that the production's distracting wig and latex game got in the way of appreciating that message.

We joke about the whole Parfums de Coeur copy-cattiness of it all, but a derivative work can have worth if it has something original and poignant to say and does so with conviction and clarity. "The Boys" turns our superhero and celebrity obsession back on us by pointing out how susceptible we are to cults of personality, and how easily claims of promoting law and order are covers for fascism. "Invincible," Amazon's animated sleeper about a teen coming into his powers, questions our blind acceptance that a Superman character would be benevolent.

"Jupiter's Legacy" may yet say something more profound that hasn't already been said about popular culture's unquenchable obsession over god-like figures and protectors. Conveying those themes with forcefulness and clarity would help its case, as would hinting at where the story wants to carry us. Instead Season 1 leaves off ends a cliffhanger twist that makes very little sense.

One person's slam is another's "suggestions based on this," meaning that while some will make a sport out of looking down their nose at "Jupiter's Legacy," others will happily envelop themselves in it, in the same way they might appreciate a cheap body spray. Sometimes when a person needs to blunt life's dull stench, almost OK is better than blank air.

"Jupiter's Legacy" is now available to stream on Netflix.