If I hadn't been obligated to watch the Snyder Cut I probably wouldn't have – but boy, am I glad I did 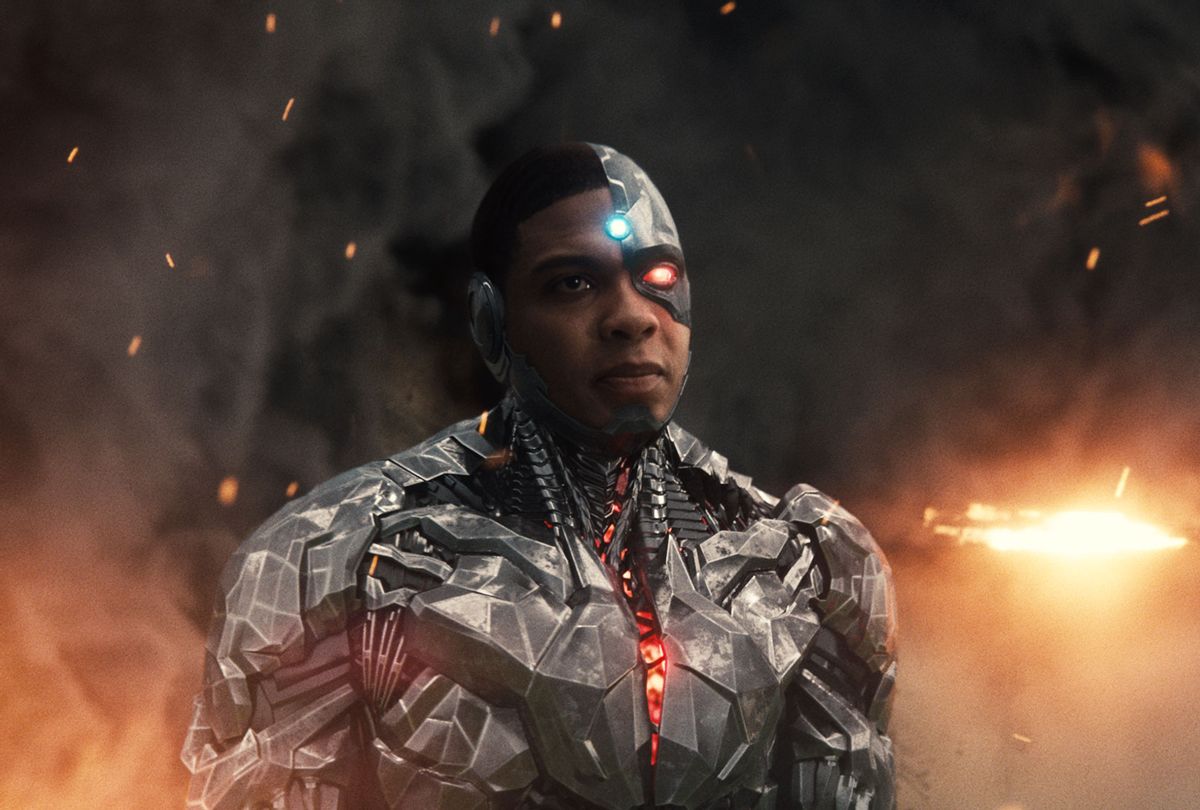 Director's cuts are primarily for a film's superfans or people curious to see what magic was abandoned on the cutting room floor. Few of them are considered necessary; fewer still fundamentally transform the story as it was originally told in theaters.

Then, against any sensible predictions, "Zack Snyder's Justice League" challenged all this by emerging from the shadows following years of social media-generated fan demand to release "the Snyder Cut." Although critical response has been mixed so far, the sum is more positive than the response to 2017's version, which bombed with audiences and at the box office.

Snyder's cut includes three days' worth of fresh content shot in October 2020 along with a yacht-load of visual effects rejiggering, such as a design overhaul on the movie's villain Steppenwolf. Other changes substantially transform the narrative, such as the revelation that Steppenwolf isn't acting alone, but to serve Darkseid  – who actually appears in this edition along with another Justice League member, the Martian Manhunter.

Does all this make "Zack Snyder's Justice League" necessary viewing? Not really, unless you're a sucker for redemption stories and vindication arcs. You know, two of the reasons people love comic books.

This time, though, the heroic journey isn't one undertaken by anyone with flight, super strength or a cave full of technological wonders and devices that go boom. It is Snyder's, undertaken through Wonder Woman, Superman and Batman – but of vaster significance – also through the daughters of Themyscira and best of all, through Ray Fisher's Cyborg.

"Zack Snyder's Justice League" also happens to be four hours long, making it slightly shorter than 1963's "Cleopatra," and about an hour longer than 1982's "Gandhi." These two films are considered to be cinematic giants; this is not. Then again, when you consider that "Avengers: Infinity War" and "Avengers: Endgame" have a combined runtime exceeding five hours . . . this "Justice League" is still too long.

On the other hand, Snyder's version confidently imagines the worlds beyond where DC and Warner Bros. could have taken "Justice League" – that is, if he hadn't stepped away and left his concept in the hands of a director with a bruised ego and an abusive personality. Snyder didn't do this lightly; he was mourning his daughter Autumn's death by suicide.

Thus Warner Bros. took the epic that Snyder envisioned and passed it along to "Avengers" director Joss Whedon, who sliced and diced it into a DC Universe version of an MCU carnival team-up.

Whedon reconfigured the film significantly to focus on the franchise's tanks, i.e. Ben Affleck's Batman, Henry Cavill's Superman and Gal Gadot's Wonder Woman, and to introduce Jason Momoa's Aquaman, who went on to headline his own film in 2018.

Basically if a character was already a brand powerhouse, and a man – specifically a Superman or a Batman – Whedon beefed up the "Justice League" script around him, which didn't leave much room for Fisher's Cyborg or Ezra Miller's Flash to develop as characters.

Gadot's Diana Prince was turned into an object for Affleck's Bruce Wayne to flirt with and Steppenwolf to taunt by claiming ownership over her. Cyborg became an angry robo-kid. The Flash turned chicken prior to their first big battle, one of many running jokey-jokes that made Whedon's version flop so spectacularly.

Although Whedon's fingerprints were all over the 2017 version, people blamed Snyder for its failures citing his grim resurrection of Superman in 2013's "Man of Steel" and 2016's "Batman v. Superman: Dawn of Justice."

Persuading those folks to devote a quarter of their waking hours to watching Snyder's do-over may be impossible, and the same might be said of anyone who finds Snyder's style in general to be cold and overwrought. That describes yours truly. If I hadn't been obligated to watch the Snyder Cut I probably wouldn't have.

Now that I've seen it I can honestly say I'm glad I did.

"Zack Snyder's Justice League" shows Snyder's evolution from a director known for emphasizing style over substance to a man who understands why we love superhero myths, whether they live in the DC Universe or Marvel's.

The simplest reason is that they're grand, colorful and explosive, everything we want in action movies. Comic arcs connect via cliffhangers, the very commodity that makes studios desirous to keep making them.

Snyder's take affirms this with a suspenseful ending that sees beyond anything previously done in a DC live-action property, expanding the canvas beyond Gotham, Metropolis or even the world as we know it. (His proposed sequel looks dark, no two ways about it. And I'd love to see it.)

Mainly, though, these stories appeal to the parts of ourselves as we wish we could be – our ideal versions of bravery, strength and nobility. When people play the old game of choosing between having the power of flight and invisibility, the explanations our selection yields reveal something about who we are. Snyder's adamant focus on the humanity of his "Justice League" heroes speaks to this, especially in the characters about which people know the least.

Batman's legend has been told by many directors and played by a large panel of actors; Superman's story is part of American lore. Patty Jenkins' "Wonder Woman" preceded "Justice League" to movie theaters in 2017 and became the 10th-highest grossing film of that year.

But little is known about Cyborg and as Snyder indicated in a recent interview, he wanted his "Justice League" to be that character's origin story, to make him as central to the mythos as his more famous counterparts.

And he does this by centralizing Ray's mourning over losing his mother in the same accident that claimed his organic flesh while railing against his scientist father's decision to transform him into a machine. Every member of the Justice League is a product of parent-child conflict and abandonment issues, but Ray's enhancements further isolate him in a society that already views Black men as suspicious.

Snyder leans more forcefully on the Frankenstein's monster parallels here than any implications that associated with Ray's Blackness. In doing this, he doesn't expand Fisher's role and Cyborg's story at the expense of any other figure, which is as crucial as all the smaller addendums and changes. Wonder Woman's solo fight sequence is bolder and deadlier in his version, but so is the determination of her sisters on Themyscira. Their efforts are significantly heightened, and the toll of their loss more acutely drawn.

Snyder takes all of the characters who aren't Batman or Superman and empowers them with similar significance and importance acknowledging that they all end up at the same table. He amplifies the might of secondary figures – Amazons, yes, but also Lois Lane and Martha Kent. Characters that live to enjoy the Whedon version's happy ending die in this one, but their deaths have reason and meaning that have little to do with motivating others into action.

Additionally Snyder appears to have taken critiques about Metropolis' over-the-top wanton destruction in "Man of Steel" to heart. In his "Justice League" the climactic battle topples buildings and includes plenty of explosions and crashes, all taking place in a ghost town with no residents.

In contrast, Whedon disempowers several of his main heroes and inserts potential innocent victims into his film to give them some little people to save. He cheapens the outcome of several confrontations by shortening them and downplaying their tragedy. Worse, he inserts dialogue in which Steppenwolf implies he will claim the Amazons as worshippers – that he would re-enslave them, essentially. In short, if Whedon's various betrayals ticked you off before, noticing the ways that his misogyny ruined 2017 "Justice League" may make you detest him all the more.

Knowing what we know now about Whedon, whether through Fisher's publicized allegations of his abusive behavior during the first "Justice League" reshoots or the deluge of "Buffy"-related allegations that effectively besmirched that show's legacy, the smaller details Snyder inserts are their own statement.

You may notice them in small rewrites, such as having Wonder Woman respond to Steppenwolf's aggressive, "This one is mine," with "I belong to no one." Or his replacing the White Stripes' aggressive "Icky Thump" with Nick Cave's pensive hymn "There Is a Kingdom" as Aquaman's introductory anthem. One is a balls-to-the-wall tune that reeks of overcompensation; the other is a lonely meditation on devotion, which is the essence of Arthur Curry's struggle as a misanthrope caught between two worlds.

Why, it is as if Snyder's version was edited to present his film as he meant it to be and say something about the man who mucked it up in the first place.

It's not that – at least, I can't imagine Snyder confirming that interpretation. He doesn't need to. His "Justice League" do-over speaks loudly and for itself . . . and for now, on its own. Snyder recently told Deadline that Warner Bros considers the 2017 edition to the official version; his cut is considered to be an "outworld non-canon version."

Studios respond to success and demand, and that "Zack Snyder's Justice League" exists is already a victory for the fans and an argument that superhero movies can also be powerful treatises on humanity too. If we get a sequel out of it, booyah . . . and for the record, a two-hour runtime is more than enough to fulfill that mission.