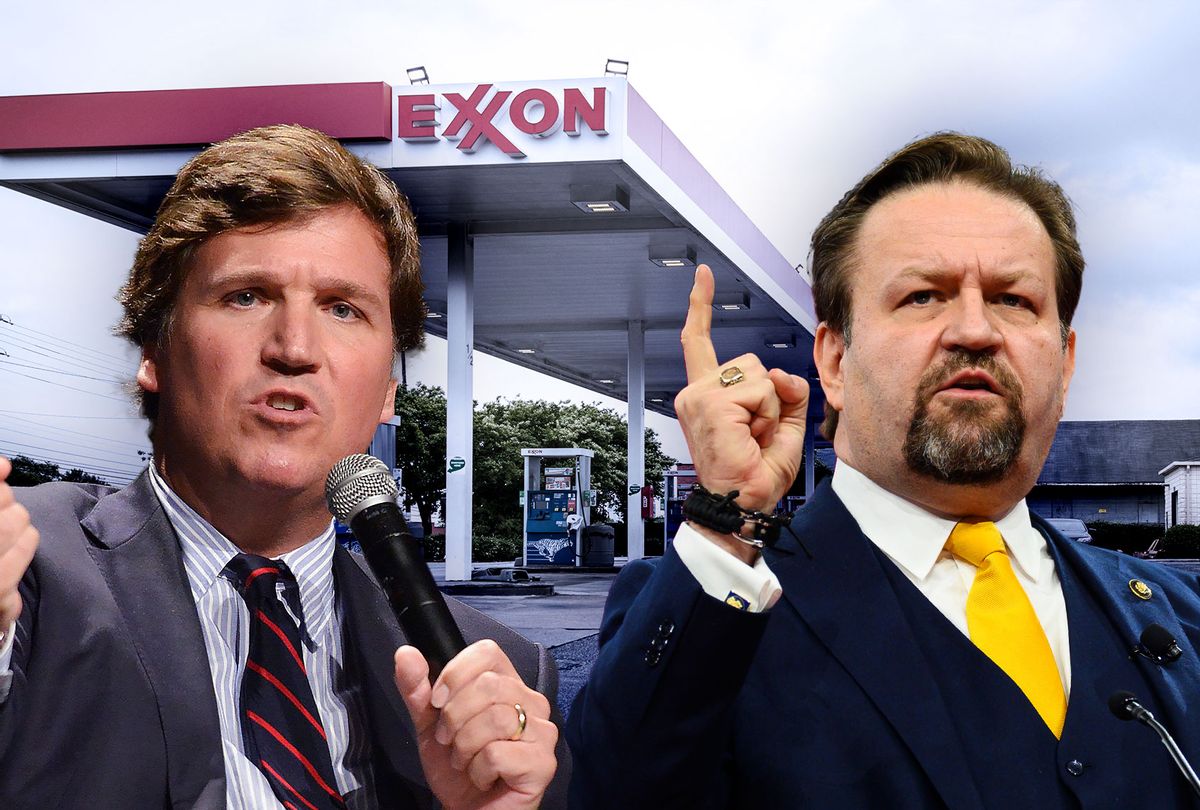 Republicans and their allies in right-wing media have found a new attack line against President Joe Biden's administration, attempting to generate over the evolving nationwide fuel storage that resulted from the hack of Colonial Pipeline, a private company, which has sent Americans into long lines to top off their tanks at inflated prices.

As tanks began to run dry at gas stations along the East Coast, right-wing pundits fired up the outrage machine and started blaming Biden and his administration.

"In case 2021 didn't remind you enough of a grimmer version of the 1970s, we now have serious gas shortages in a country that just recently was energy-independent," Carlson said. "All along the East Coast of the country today, people couldn't fill up their cars. The footage looks like Venezuela." Carlson further remarked, in skeptical tones, that "the official explanation is that some mysterious gang of cybercriminals hacked the software at a major American fuel supplier called Colonial Pipeline."

"What is this about?" Carlson then posed to his audience. "Well, you know. On some level — let's be honest about it — the White House approves of this disaster," he continued, blaming the Biden administration's policies of gradually moving away from fossil fuels.

"Yes, some gas stations are closed tonight," Carlson continued, before launching into a dystopian future fantasy. "But soon enough, the lunatics plan to close them all — every gas station in the entire United States, shuttered forever, to make way for some new, as-yet-undefined means of transportation that will magically replace the gasoline engines we've used for more than 100 years. This is a green revolution. So who cares about some old pipeline?"

"In the state of California, the average price of a gallon of gas is over $4," Carlson continued, still trying to link a shortage caused by hackers to Biden's policies. "A year ago, it was $2.70. … Why? This is the result of policy decisions made by the new administration. This is the Green New Deal. We've got it already. And if you love gas shortages and electricity blackouts and $80 plywood, this is the program for you."

Former President Donald Trump even got in on the bashing, releasing a statement that trolled Biden's son, Hunter. "If there were long and horrible gas lines like this under President Trump, the Fake News would make it a national outrage! Did Joe Biden put Hunter in charge of our energy, with all of his Burisma experience?" Trump stated in a Wednesday press release. "Even Energy Secretary Jennifer Granholm is lost!"

Other right-wing pundits got in on the blame game, as well.

Donald Trump Jr., the self-appointed "General of the Meme Wars," posted memes about the fuel shortage to Instagram, likening the long lines at gas stations to an innovative (and nonexistent) Biden political rally. 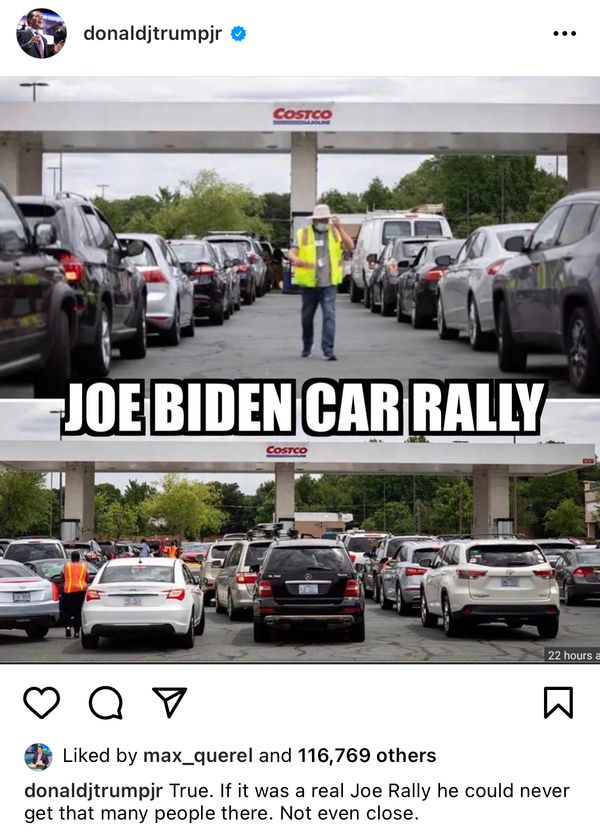 "If it was a real Joe Rally, he could never get that many people there. Not even close," Don Jr. added in a comment responding to the meme.

Right-wing radio host Sebastian Gorka wasted no time this past week blaming the Biden administration, positing that the outage had occurred due to Russia "see[ing a weak America" under Biden, while posting his own gas station-related memes on Instagram. 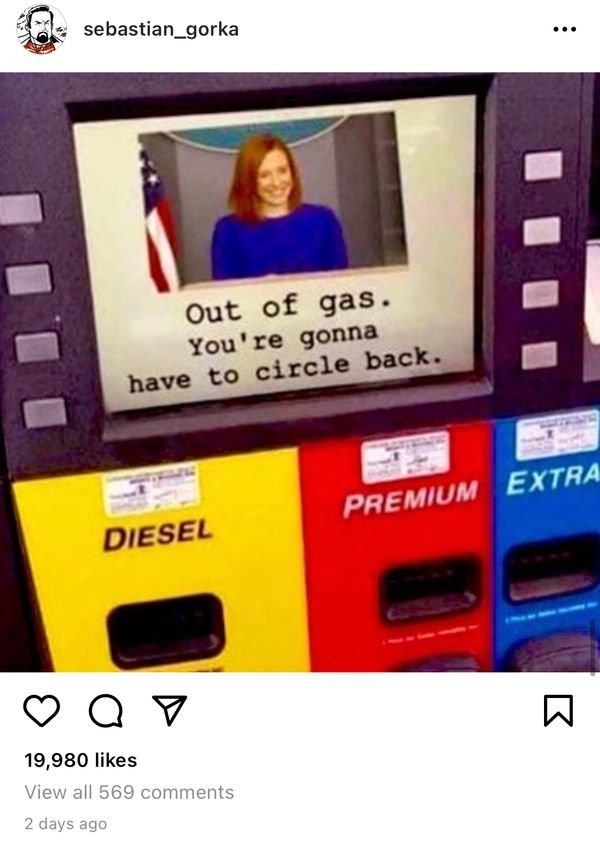 "You [Biden admin] think childcare infrastructure, but the pipeline that supplies 45% of the oil and gas to the eastern states of America, that's not the concern of the U.S. government?" Gorka said during a somewhat illogical additionally riff during his Tuesday program.

"This Is What Gas Stations Look Like in Biden's America," Fox News contributor Dan Bongino's website captioned a video.

"It's sad they are now realizing putting Biden in office was the biggest mistake this country has ever made. They miss having gas when Trump was President," right-wing comedian Terrence Williams said on Twitter (referencing an ambiguous "they"). Dinesh D'Souza managed to combine homophobia with a fart joke in remarking, "I hear Northern Virginia is out of gas. I'm not feeling overly sympathetic. Bend over, Biden voters! Your best bet now might be to bring in Eric Swalwell and feed him lots of beans."

"The frenzy came after Colonial Pipeline discovered on May 7 it had been the victim of a cyberattack and ransomware, forcing the company to temporarily stop its pipeline operations," PBS noted, in a somewhat more cogent explanation of the fuel shortage on Thursday. "After Colonial Pipeline came to a temporary halt this week, Americans began panic-buying gasoline, fueled by social media-driven fears the supply would run out."

On Thursday, Biden told the American people on national television not to "panic" over the sudden shortage of fuel, and reassured them that the pipeline was now operating but it would take several days for supply to return to normal. "I want to be clear — we will not feel the effects at the pump immediately," the president said. "This is not like flicking on a light switch. This pipeline is 5,500 miles long."

Biden said he believes that over the coming weekend, we should see a "return to normalcy." "Don't panic," he added. "I know seeing lines at the pumps or gas stations with no gas can be extremely stressful. But this is a temporary situation. Do not get more gas than you need in the next few days. ... Panic buying will only slow the process."