Republicans spent years making politics about images, not policy — now Biden has weaponized that against them 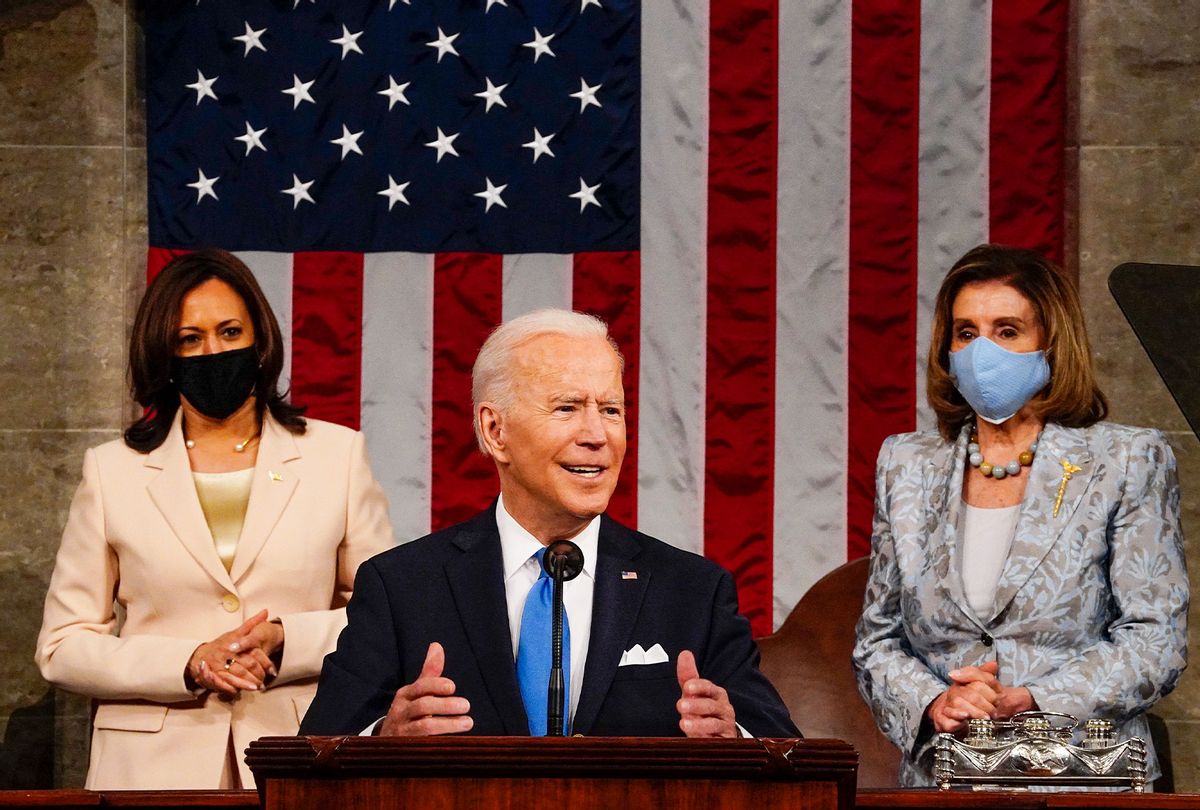 President Joe Biden addresses a joint session of Congress, with Vice President Kamala Harris and House Speaker Nancy Pelosi (D-CA) on the dais behind him on April 28, 2021 in Washington, DC. On the eve of his 100th day in office, Biden spoke about his plan to revive America’s economy and health as it continues to recover from a devastating pandemic. He delivered his speech before 200 invited lawmakers and other government officials instead of the normal 1600 guests because of the ongoing COVID-19 pandemic. (Melina Mara-Pool/Getty Images)
--

President Joe Biden's plans are ambitious. I know this because every headline Thursday morning after Biden gave his first speech to a joint session of Congress said so.

Except that none of this actually feels risky. On the contrary, Biden was able to frame everything he said in convincingly reasonable tones. Put at ease by his patented "c'mon, man" approach, so far, it seems like the public can't be bamboozled into feeling angry, scared or worried about Biden's surprisingly progressive aspirations. Snap polls after the speech showed that 85% of viewers approved of Biden's speech, out of a crowd that was only 54% Democratic. This comports with previous polling that shows that, while Biden's approval numbers are stuck in the low 50s because of GOP voters who will never say they like him, an overwhelming majority like his actual policy ideas. Demonizing him as "tax-and-spend" isn't working, because voters are increasingly keen on the idea that we should be taxing corporations and wealthy people and spending it on the programs that Biden has successfully — and correctly — identified as investments in our nation's future: infrastructure, child care, jobs.

"We have to prove democracy still works," Biden said during his speech. "That our government still works – and can deliver for the people."

The thing is, these are the same exact arguments that progressives have been making for decades, and yet Republicans  — aided by a loud right-wing media, the racism of the majority of white voters, and a mainstream media addicted to false equivalencies — were successful at demonizing such reasonable points as basically communism. Why then does it seem like Republicans suddenly can't land a glove on Biden?

Part of the credit should go to Biden himself, who is rising above what doubters like myself thought of him. He was able, as John Harwood of CNN said, to speak "in plain, non-political, non-ideological language invoking the people he wants to help."

But let's face it: Republicans also did this to themselves.

For decades, Republicans have increasingly abandoned policy debate in favor of culture war antics, race-baiting and raw tribalism. From Monica Lewinsky to Barack Obama's birth certificate, the modern GOP has turned politics into conflicts about personality and identity, not policy. Even during the height of the debate over the Affordable Care Act — the biggest policy agenda Democrats had pushed since the 1960s — the Republicans were mired in culture war theatrics. Their response was to freak out about abortion and birth control, as well as the "death panels" nonsense, which was always a barely coded conspiracy theory about Democrats taking away health care from old white people so younger, more racially diverse people could have it. They created a political environment of style over substance because, of course, they know that they can't win debates about policy on the merits.

The result is a situation where voters think Biden is more moderate than Obama was, even though the reverse is true, simply because Biden looks and sounds like more people's idea of a moderate. Those stereotypes are racist, to be clear. As Paul Waldman of the Washington Post points out, Obama "was young, Black, cosmopolitan, hip and the hero of young people across the country," and Biden "has always been the establishment," a "folksy guy with a bottomless supply of bromides."

No wonder right-wing media has, in desperation, grasped for a bizarre conspiracy theory accusing Vice President Kamala Harris of being the "real" president. They don't know how to do oppositional politics that isn't about base racism and sexism. But it is also an increasingly losing proposition. The forces that allowed Obama to get elected in the first place — Americans growing more relaxed about racial diversity and more urbane in general — are only growing stronger as time goes by.

One line during Biden's speech Wednesday night really jumped out at a number of pundits: "Trickle-down economics has never worked." It was a notably explicit repudiation of Reaganism. But it's also likely that large numbers of Americans, especially younger Americans, have no idea what "trickle-down economics" even is or was supposed to be. Not just because it is a failed economic theory that was always nonsense, though it is that. The phrase is more so a relic from a time when conservatives used to pretend to have serious policy ideas.

"Trickle-down economics" never made sense, but it sounded smart and gave Republicans a thing they could say to voters to explain why cutting taxes and government investment would somehow lead to prosperity. But mostly, they've given up even that kind of argument in favor of screeching about Dr. Seuss and "cancel culture," hoping these tactics would distract voters from their more substantive concerns. Even when Republicans half-heartedly try to argue against Biden's policy ideas, it's through lame tactics like arguing over the semantics of what constitutes "infrastructure."

Of course, a big part of the reason that Republicans want to avoid talking policy is that, increasingly, voters can see what decades of doing things their way has done to this country.

Low taxes on corporations and rich people, coupled with low levels of government investment, did not, as promised, produce a robust economy where private interests pay for all that stuff people want and need. Instead, our roads and buildings are falling apart, health care is a nightmare, and childcare and education are unaffordable. Food is cheap, in part because it is one sector government quietly subsidizes. But as Biden pointed out in his speech last night, so many Americans are living paycheck to paycheck that the economic downturn meant "nice cars, lined up for miles, waiting for a box of food to be put in their trunk."

Republicans are grumpy, extremely grumpy. Republican Senators watching the speech last night collectively looked like they smelled a fart, and not just because they were wearing masks. They're mad, not just because they know he's right. They're mad because they know he's popular and what he's saying is popular. They'll block as much of his agenda as they can and hope that voter suppression and gerrymandering do the rest. But on the merits of the argument itself? They're toast.

It's not because Biden is some super-politician. It's because Republicans spent decades making politics into a reality TV show. Now that we're facing a real crisis, the public is turning its eyes towards the comfort of a real politician who wants to do real policy. And Republicans have nothing to say in response.