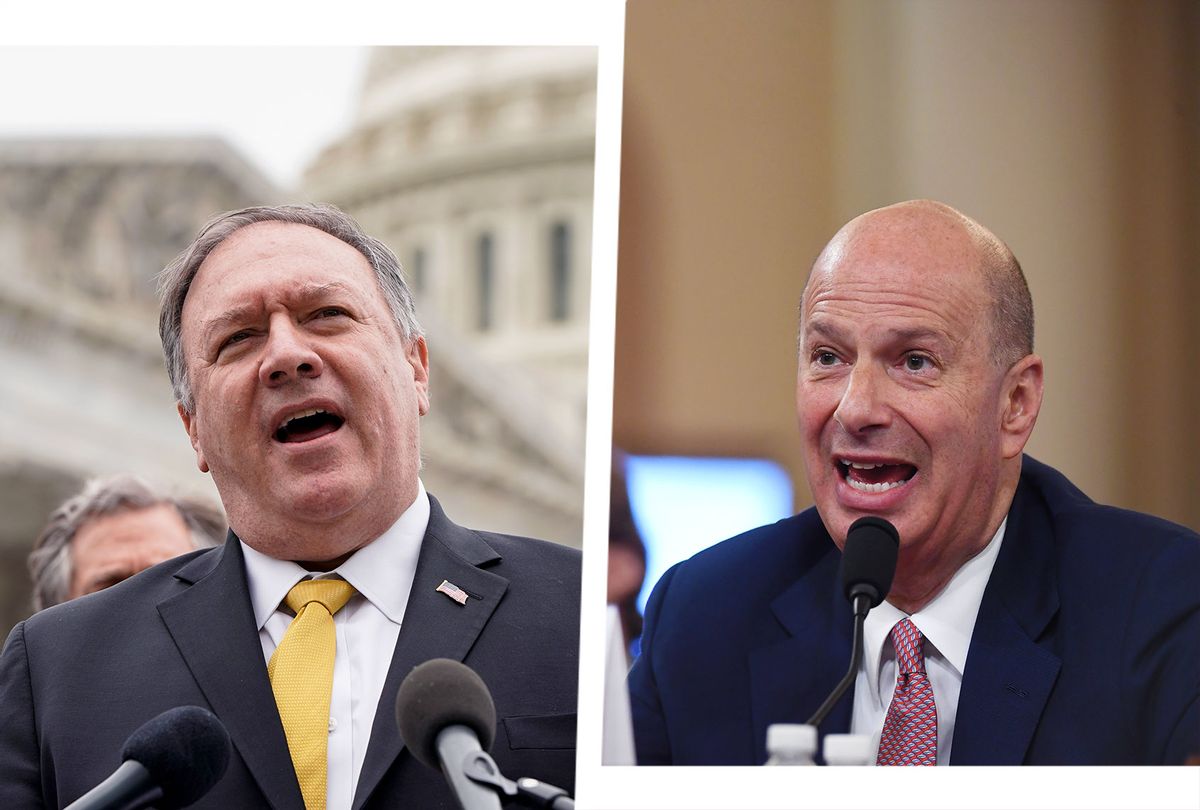 Gordon Sondland, the former U.S. ambassador to the EU who became a key witness during former President Donald Trump's first impeachment proceedings, has filed a lawsuit against former Secretary of State Mike Pompeo and the federal government for legal fees stemming from his 2019 impeachment testimony.

Sondland filed a 21-page lawsuit in federal court in Washington on Monday alleging that Pompeo "reneged" on his "legally binding promise" that the State Department would pay Sondland's legal fees in the impeachment probe after the former ambassador corroborated allegations of a "quid pro quo" between Trump and Ukraine.

Sondland, a Portland hotel magnate who was appointed by Trump after donating $1 million to his inaugural committee, said in the lawsuit that Pompeo and his staff "continued to reaffirm" the then-secretary's promise to cover the legal costs through the fall of 2019. The department ultimately paid $86,040 of his legal fees, according to the complaint. The suit seeks $1.8 million in compensation paid by the government — or by Pompeo personally, if he lacked the authority to authorize the payment.

"If Pompeo did not have the authority to bind the government, Pompeo went rogue and acted outside the course and scope of his employment and duties, making a promise in his personal capacity that was not the kind of act he was employed to perform, and not motivated by a desire to serve as the leader of the Department of State," Sondland's legal filing argues. "Instead, it was self-serving, made entirely for personal reasons for his own political survival in the hopes that Ambassador Sondland would not implicate him or others by his testimony."

Government officials are typically provided legal representation before Congress by the department where they work or by the Justice Department. Sondland claims in the complaint that the State Department "bucked normal convention and denied him the services of any government counsel."

The suit claims that Sondland's legal costs were particularly high because the administration restricted "access to materials essential to his preparation," forcing Sondland's lawyers to "reconstruct" a timeline of the events in question.

The State Department initially blocked Sondland's testimony, but he agreed to be interviewed after House Democrats issued a subpoena. Sondland proved to be a key witness for Democrats in Trump's first impeachment probe. He initially claimed he did not know about any quid pro quo after Trump pressured Ukraine to investigate Joe and Hunter Biden in exchange for military aid and a White House meeting, but later revised his testimony significantly.

"Was there a quid pro quo? With regard to the requested White House call and White House meeting, the answer is yes," Sondland testified at a congressional hearing, adding that "everyone was in the loop. It was no secret."

After the testimony, the suit says, Sondland was pressured to resign his ambassadorial post.

After the testimony, Trump tried to distance himself from the Republican donor, claiming that "I hardly know the gentleman" after previously praising him.

Trump ultimately fired Sondland in February 2020, just two days after the then-president had been acquitted by the U.S. Senate.

Sondland said he was told by the administration that it "appreciated his testimony" but "wanted to purge everyone remotely connected to the Impeachment trial," according to the complaint.

"For all his troubles, Ambassador Sondland learned that testifying truthfully and candidly before Congress as cameras roll was in fact a fireable offense in Pompeo's Department of State," the lawsuit says.

A spokesperson for Pompeo, who is reportedly mulling a 2024 presidential run, said in a statement to NBC News that "the lawsuit is ludicrous. Mr. Pompeo is confident the court will see it the same way."

Mark Zaid, an attorney who has represented many government officials in lawsuits, said it was unlikely that Sondland would be able to win the promised legal fees.

"There should be provisions for government officials who are unwittingly pulled into political battles that they have their legal fees covered," Zaid told The Washington Post, which first reported the lawsuit. "He did the right thing. He stepped up and fulfilled his role as a representative of the U.S. government." But because secretaries of state are given broad immunity for official actions, he added, "the sad fact is that sometimes doing the right thing doesn't lead to a reward, and unfortunately it has a cost."

Sondland, who provided 17 hours of colorful testimony to impeachment investigators, told the House that he, along with Energy Secretary Rick Perry and special Ukraine envoy Kurt Volker, were the "three amigos" in charge of an "irregular" foreign policy channel aimed at forcing Ukraine to announce investigations Trump wanted in return for the release of about $400 million in blocked military aid and a highly-sought Oval Office meeting between Trump and Ukrainian President Volodmyr Zelensky and Trump.

The effort was driven by former Trump attorney Rudy Giuliani, who bragged publicly that he was pushing Ukraine to investigate the Bidens in order to damage Joe Biden's presidential campaign.

Giuliani has since come under scrutiny by federal prosecutors at the Southern District of New York, an office he once led as U.S. attorney. Federal investigators raided Giuliani's home and office last month, seizing more than a dozen electronic devices. Investigators are reportedly looking into Giuliani's role in ousting Marie Yovanovitch as U.S. ambassador to Ukraine, after publicly describing her as a roadblock to his pressure campaign in Ukraine. Investigators are also looking at whether Giuliani was working on behalf of Ukrainian officials or oligarchs accused of corruption and whether he violated laws prohibiting lobbying on behalf of foreign officials without registering as a foreign agent. Giuliani has denied any wrongdoing.