A star-studded production is only as good as the script's efficiency. With Stephen King writing, that didn't happen 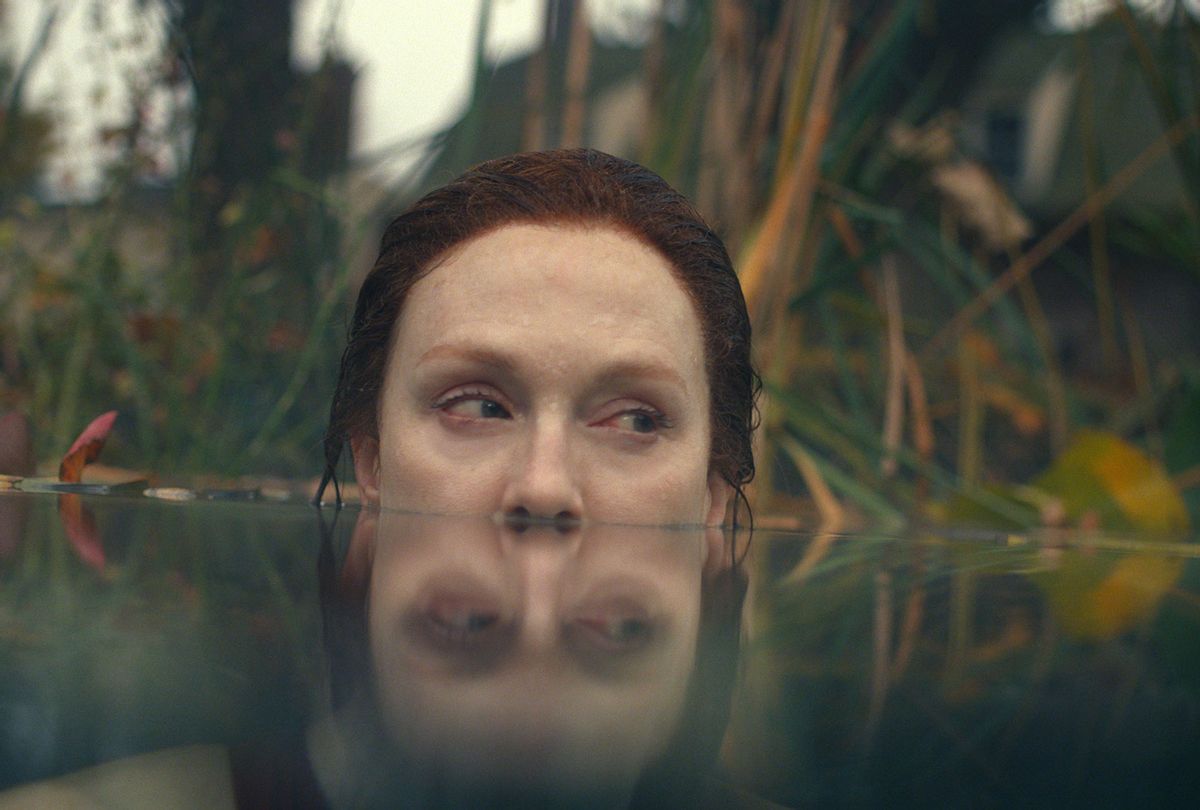 Catatonia figures prominently in "Lisey's Story" by way of the title character's sister Amanda, who retreats so far within herself as to be unreachable by medical professionals and her family. What those reading Stephen King's 2006 novel know, and people watching his eight-episode adaptation see in rich detail, is that Amanda isn't trapped within but has journeyed elsewhere.

To people in this realm, it looks like God has simply hit the pause button on this woman and left her there. Joan Allen plays Amanda, and freezes her stricken face as if she's trying to say "Help me," but gets ensnared in the opening breath on the H.

I have no personal experience with this condition, but from reading the first-hand accounts of those who have, slogging through eight hours King's series probably counts as a vicarious somatic recreation. For about half of it I wondered why I wasn't feeling anything and then, on the back four, I found myself wishing with all that is within me that it would end soon and quickly, praying for rescue and mercy all the while.

Generally this isn't my experience with King's books or with the best film adaptations of his work. TV shows based on his work are a little more hit or miss. I really wasn't expecting this story to be a slow torture, since the novel is . . . fine . . .  and being brought to life by a superior cast led by Julianne Moore, Clive Owen and a grubby, extortionately creepy Dane DeHaan.

The actors are is the topmost salvation of "Lisey's Story" – the ones mentioned above, as well as a flinty Jennifer Jason Leigh, a King alumnus from "Dolores Claiborne" once again cast as the skeptic tired of cleaning up her family's messes. She's terrific, and it probably goes without saying that Moore's work here is nothing short of arresting.

They're not the problem. Instead, blame the collapse of "Lisey's Story" on King himself.

King declared that the only way he would allow Lisey's story to be adapted for the screen is if he wrote it.

King is also the man who published an 823-page version of "The Stand" only to come back later and declare, "You know what this needs? The equivalent of another book inside the existing one."

Now, when you're Stephen King you can do that. A person can also respect the energy behind that requirement given his personal connection to the story. But every writer needs an editor, especially King the screenwriter. Remember the entirely unnecessary epilogue to "The Stand" remake? He wrote that too.

The seed of "Lisey" was planted after a long hospital stay resulting from a bout of double pneumonia. Upon returning home he discovered his wife Tabitha had redecorated his study and, in the process, packed all of his things in boxes. Seeing his life's work and effects reduced to several cubes gave him a haunting sense of what it would look like after he was actually gone. That makes Owen's Scott Landon his stand-in.

"Lisey's Story" unfurls over two timelines – three, if you count the long, exploratory flashbacks to Scott's abusive childhood, where we meet his long-gone brother and violent father – as well as in this reality and an otherworldly dimension to which Scott travels through water and will.

In the main we ride with Moore's Lisey as she's coming to terms with widowhood following Scott's untimely death. Concurrently we flashback to their courtship and marriage, from the earliest days when he was still an unknown through his success and international stardom.

Owen and Moore don't exactly heat up the screen together, but Moore makes Lisey's reaction to Scott's strange bouts of cutting and bizarre explanations believable in the way one comprehends codependency.

In the present Lisey sorts the pain of her loss through a game of sorts that Scott leaves for her called a "Bool Hunt," kind of a scavenger stroll from clue to clue that ends with a prize. What is a bool? It could be a wonderful treasure or entirely wrecking.

Discovering what lies in store for Lisey is delayed and complicated when a local professor (Ron Cephas Jones) darkly insists she hand over Scott's unpublished work to his university and, for reasons no sane person can fathom, enlists DeHaan's Jim, a Landon superfan (!) who he finds on the Internet (!!) to scare her into compliance.

All of this is occurring as Lisey's sister Amanda slips into a catatonic episode following a self-harming incident discovered by their other sister Darla (Leigh). Lisey soon figures out that Amanda's drift away from sanity may have something to do with Scott's other reality.  Admittedly Allen doesn't get much to do in terms of a kinetic portrayal, but her distressed, ashen 100-yard stare adds an urgency to Lisey's mission to get her back.

Much as it makes me cringe to say this about any actor, Moore is a master of incandescent suffering, and Lisey Stanton is little else but for most of the story. The story romances her anguish, or maybe cinematographer it's the sentimental rosy golds and grays Darius Khondji surrounds her with, but it is transfixing.

This cuts the other way too when King avails himself of streaming's lack of limitations when it comes to depicting torture. DeHaan has talent for waxing ghoulish, and the author and his director Pablo Larraín send him into a kind of violent overdrive – beatings, bone breaking, and worse. There's an early scene where he pulls out a pizza cutter and rakes a strip through a pie he has with him, and we're meant to see this as a warning instead of subtle foreshadowing.

But performances can only do so much to mitigate King's exhaustive scripts and the stylized but spiritually chilled approach Larraín takes to directing pieces like this. Writing for readers has a cadence distinct from writing for the screen that eludes King here.

What sings on the page doesn't necessarily translate smoothly or even well in direct, too-faithful adaptions, and here he chooses to tell us, and show us, and tell us some more instead of inviting our imagination to do some of the work.

Why provide, say, Scott with an efficient flashback montage revealing details of his dark background when you can devote nearly half of two separate episodes to it? On the one hand, this ensures that we know how deranged Scott's father (played by Michael Pitt) was and spend time with his "bad" sibling. All it costs is a huge chomp out of the narrative's momentum.

In the same way that "Jackie" falls victim to Larraín's devotion to, shall we say, an elegant sense of remove, he never entirely immerses us in horror or submerge us in grief. It's the opposite, actually. Instead of engrossed, I felt trapped.

What kept me watching, besides the requirements of my job, is the impressive humanity King instills in his work, even the bloodiest exploits. In "Lisey's Story" it takes on a romantic wistful tone that's singularly heartbreaking, and entirely appropriate when you remember that it's an ode to marriage – his marriage, specifically, and the loving warmth he shares with his wife. But it's also a rumination on loss and mourning.

"Grief is a bool hunt," Lisey tells Dara in a moment of quiet, adding, "My prize is learning how to be alone, which is not much of a prize." The obstacle to moving forward is supernatural in part; with King it usually is.

One salvation is that Boo'ya Moon is a surreal beauty – a florid, wild forest with a vast body of water at the center surrounded by a kind of amphitheater populated by scores of souls sitting quietly and staring into the horizon. It goes with out saying there's a macabre beast romping around in all that magical nature waiting to confront somebody, sooner or later.

As is the case with all King-related TV shows and movies, though, his ardent fans will probably love "Lisey's Story" for the same qualities that walled me off from it. Despite the overall drag and the numbing impenetrability of Larraín directing choices, King's language holds similar power to what Scott ascribes to the Boo'ya Moon's waters – in the right circumstances it can be healing, and it also fascinates.

But when the artist becomes too fascinated with himself the spirit of a work sags and dulls. That, unfortunately, is what has happened here. Near the end of the series episode closers that are supposed to play as cliffhangers come off as unnecessary extensions. In the finale King stacks enough endpoints on top of each other and keeps on going that after a point it starts to feel like the cinematic equivalent of medieval punishment – specifically the kind where the victim is slowly crushed to death by heavy stones. Truly an act of peine forte et dure.

Despite this, King also packs quotable lines into the story, too. Sadly the one that spoke directly to my beleaguered soul was Darla's plea in the face of never-ending tedium: "I am be-e-e-e-gging you, I am begging you to stop this bulls**t."