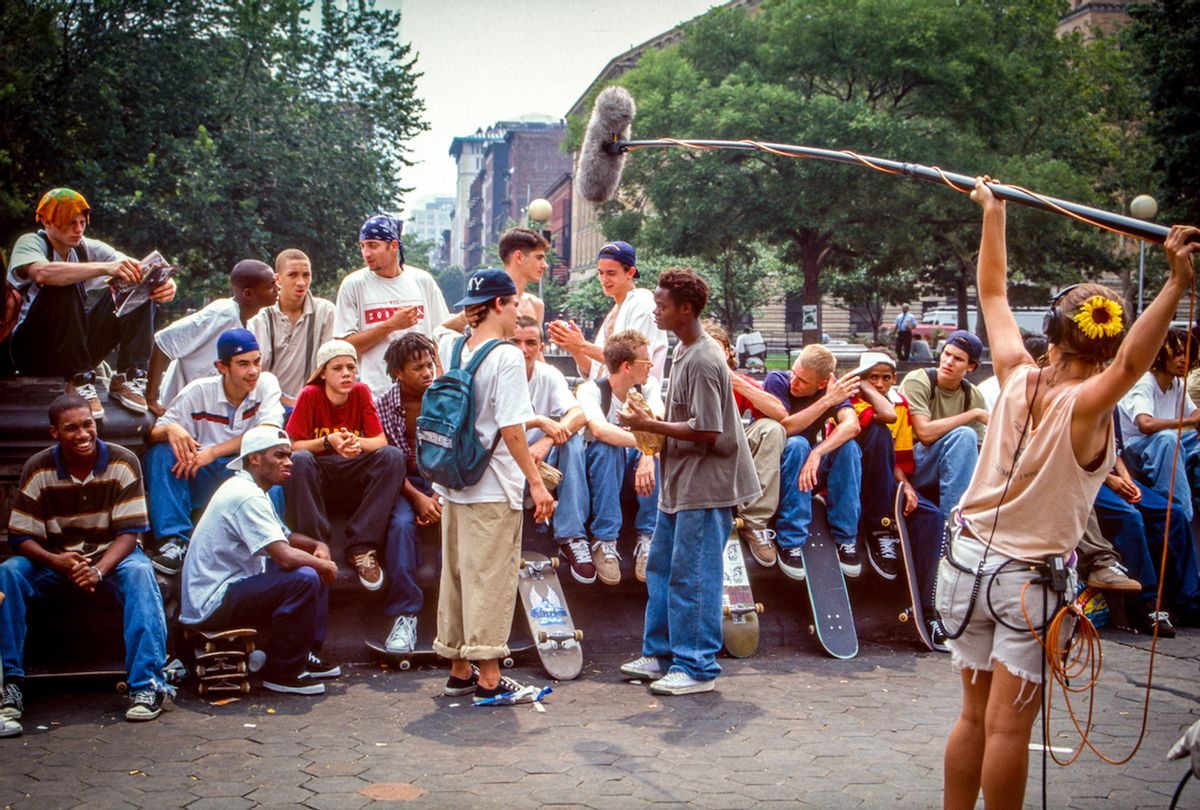 In 1995, Larry Clark's film, "Kids" became a sensation with its "authentic" depiction of teens participating in reckless behavior including drug abuse and sexual activity — not the least of which included deflowering virgins. The film was controversial both in terms of its content but also because there were accusations that screenwriter Harmony Korine and director Larry Clark were exploiting their characters and the non-professional actors playing the roles.

While "Kids" launched the careers of Chloë Sevigny and Rosario Dawson — as well as Justin Pierce, who won an Independent Spirit Award for his performance — for most of the cast, fame was fleeting. The $1,000 the teens were paid to perform was insufficient, given that the film, which had a $1.5 million budget, made more than $20 million at the box office.

Now, 26 years later, Australian filmmaker Eddie Martin reconnects with a handful of the kids from "Kids" for his documentary, "The Kids," which is having its World Premiere at the Tribeca Film Festival. Hamilton Harris, Priscila Forsyth, Jon Abrahams, Peter Bici, and others from Larry Clark's film recall the evolution and impact of "Kids" as well as how their lives where transformed by the experience. Harold Hunter, who was a lynchpin in the group of skaters that formed the core group of teens in the film, is specifically featured as he brought the then 19-year-old Korine into the fold.

Martin's documentary, itself a cautionary tale, addresses the economic inequality, drug use, homelessness, lack of a strong family, and other social issues that drove the "kids" to form an alternate family unit back in the day. "The Kids" also chronicles the casting, shooting, and release of the film and its tragic aftermath. The filmmaker spoke with Salon about his documentary.

What was your impression when you saw the film "Kids" for the first time? Was it controversial or inspiring to you?

It was neither nor, to be honest. I too, was a skater — just on the other side of the world, so those characters were not unfamiliar to me. I thought the story was a bit cheesy, or over the top. It didn't impact me the way that it impacted so many others. I am aware of how much the film means to a lot of people, and that it is a cult classic. I only saw it once. I could have taken it or left it.

That's a great answer — the alternative to, "I have been obsessed with 'Kids' for 25 years and had to track down everyone involved!" Why did you decide all these years later to make a documentary about "Kids?

Hamilton had been wanting to tell his story for some time, apparently. He had been having conversations with people and things weren't coming together. We had a mutual friend who is an artist, and he reached out to me, and said he had a friend who is passionate to tell his story and maybe you can help, and he connected us. I reached out and as I got to know him, we had a connection. I found his alternative narrative to the film, and his effort to honor his friends, really engaging, so I wanted to do whatever I could do to empower him to bring his story to audiences.

You spend significant time in your documentary presenting the background of Hamilton Harris, and the appeal of Harold Hunter, so viewers are very sympathetic to these "kids" who supported each other and bonded over skate culture. What observations do you have about this "functional family" that these kids created?

We all knew New York had a wild time, but going into this, one of the things I learned in the process of making this film is how incredibly hostile the environment of New York City was in the 1970s, '80s, bleeding into the early '90s. These kids grew up under quite traumatic circumstances and they were forced to create their own functioning unit to survive in this incredibly hostile world, and that was working for them. When this film came along, and affected their lives positively or negatively, it essentially started to break that group up, and they fractured, and things started to change. They lost their support network.

You make very brief mention of Chloë Sevigny and Rosario Dawson in the film. While they have had successful careers, you choose not to focus on them. Were they connected with the core group during?

Not a lot. Our story is really about the essential core group of Hamilton and his [friends] and those characters [Chloë and Rosario] were not a part of that experience. They were, obviously, involved in the making of the film, but it is my understanding that they didn't continue a relationship with folks after the film. They were outsiders not connected with our characters' experience. We asked them for interviews, but it didn't come to fruition. We did reach out to Larry and Harmony.

There are questions about the teens being exploited by Clark. What are your thoughts about the content?

For us, it was really important to share the experience and let viewers make up their own minds. For each individual member of the community, they had a different experience. I don't feel that it's my place to comment on each — whether they felt exploited or not.

The impression I got from your film was that they really were exploited.

They were young, and had no experience, no guidance, no mentors, no parental figures. As one character says, "They were stoned and going with the flow." It's an interesting space. That's one of the things in our film — about not having guidance and mentors. When the film ["Kids"] came out, they didn't know how to cope with the situation and had no one to help guide them and give them advise on how to navigate what happens when this comes out and get famous. That was another film that they had to deal with.

Most of the teens in "Kids" were taken advantage of it seems. That surely impacted Justin Pierce and Harold Hunter, who "became victims" after the film's success? What are your thoughts on how this experience impacted them?

There was a false narrative that was marketed as being true. It's a very questionable space. This is a human story at its core, but it's also a cautionary tale. It's shining a light on questions of ethics and exploitation. Again, I really just want the audience to watch and make up their own minds on that.

I applauded Highlyann, who is featured in your film and didn't appear in "Kids."

She made the right decision, and good for her. I think there is value in these stories, these alternate narratives, and the characters' experiences despite the handful of successful people who made it out over the past 26 years. That was what was interesting to me and I hope translates to audiences.

"The Kids" features a clip of Clark dodging questions during a press conference at Cannes. You indicate in the film that both Clark and Korine declined participation, did you expect them to participate?

It's right to give everyone the opportunity to share their side of the story and to explain or understand why these choices were made. The same goes for Harmony.

If Clark and Korine had agreed to talk, what would you have asked them?

I would ask them to share their experiences. I may have asked them how they would respond to claims that were made by some of our characters, but it would have been more about them telling their story and sharing their side of events.

It seems many of the subjects in your documentary have survived and thrived. Yet despite the theme of these teens "wanting a better life" you don't reveal much about where they are now, or how they got there. What decisions did you make regarding this?

One of the core things here is about breaking cycles. If you're born in the projects, or into poverty, or born into addiction, or domestic violence, these cycles can be incredibly hard to break out of. Despite all those challenges and all this trauma of growing up and losing friends and all the stuff they gone through, some of our heroes have managed to break those cycles and form their own functioning family units. They have kids now and are not repeating these cycles, and there is power in that. That's inspiring — that they were able to break through and better their lives and being good mothers and fathers and provide the guidance that they didn't have. That's a wonderful thing to see how they evolve and change.

Do you think a film like "Kids" could be made now? Why or why not, and what do you think it would be like?

Wow! I don't think it could be made now. Unless it was made some in some third world country. Hopefully, through all the Weinstein drama and all that that we've grown in terms of ethical boundaries. I'm not sure if it should be made, but if it is, it shouldn't be marketed as real when it's not; the impact that had on vulnerable members of society.