On "Kevin Can F**k Himself," a horrible man has eclipsed the show's true hidden potential 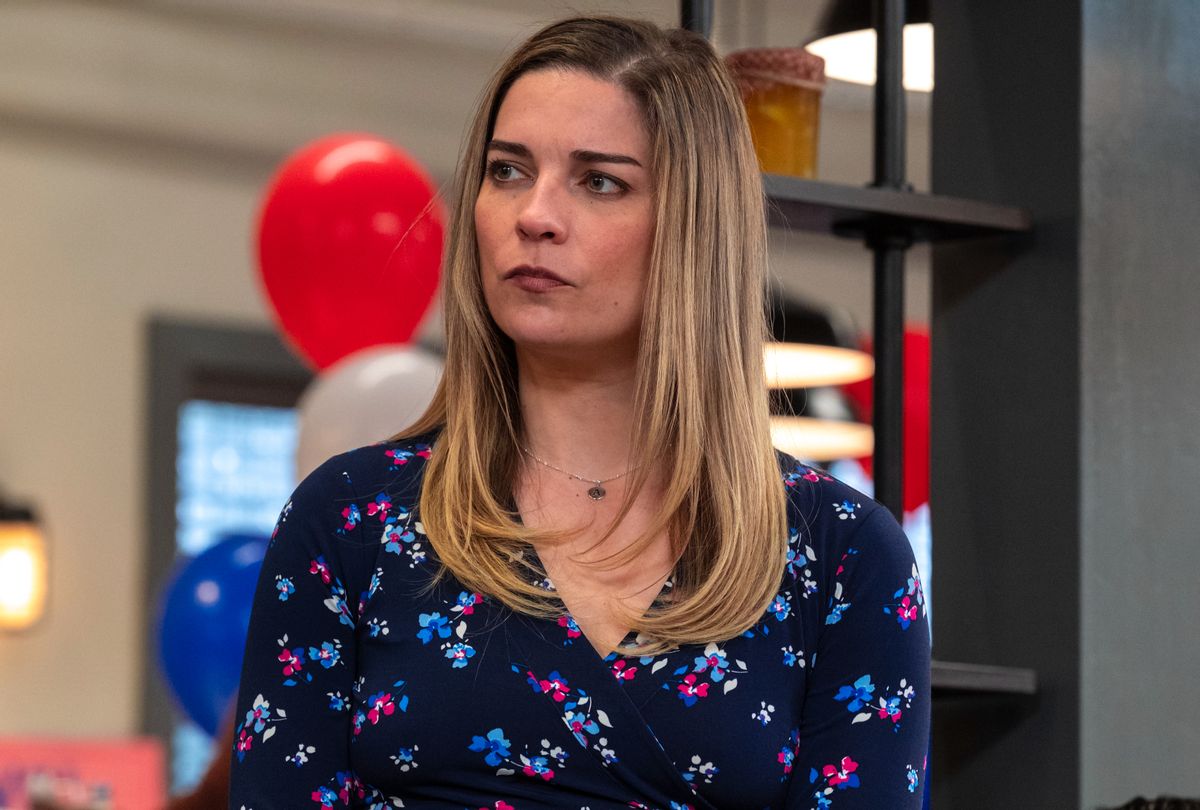 Annie Murphy in "Kevin Can F**k Himself" (Jojo Whilden/AMC)
--

For a spoilery read  with "Kevin Can F**k Himself" creator Valerie Armstrong about what happened in the finale, check out Salon's interview.

As first seasons go "Kevin Can F**k Himself" wasn't an unmitigated success. But it is far from the only show that knows what it wants to do with its concept without completely figuring out what it wants to be by the time its finale rolls around.

That airs Sunday night on AMC (already streaming on AMC+) and lays paving stones for a second season in which the sitcom could coalesce around a fresh purpose for those who are still in it. Going into the finale we learn exactly what happened after that fateful penultimate episode's cliffhanger. I'll simply remind you that Allison McRoberts' (Annie Murphy) entire reason for sticking with her good-for-nothing husband Kevin (Eric Petersen) all this time is that she desperately wants him to die. Last week's episode "Broken" closes with a gunshot, meaning she may have gotten her wish.

The finale's title "Fixed" teases that may have happened, if you read that word to mean repaired. But that would mean you haven't been watching this show closely enough. Nothing in Allison's town works, especially for women like her. She's the most honest version of herself in the gritty drama side of the show, but the sitcom – Kevin's world – is more colorful and fun.

Hybridizing a network-style multicamera sitcom with a gritty cable antihero drama was never going to be easy to execute. But the complete tonal dissimilarity between the laugh-track side of Allison's world and the half that's entirely a grim working-class drama was never this show's problem.

Nor is Murphy's performance, but that probably goes without saying. Her seamless transition between perky if put-upon sitcom wife and a woman on the verge of losing her mind signals a versatility that's only begun to be tapped. "Kevin" proves how capable she is of doing so much more.

Left unclear is whether she will or should be doing it in a second season of this series. We got to know a lot about who Allison is over these past eight episodes while learning little about Kevin. The writers probably meant to keep Petersen's characters shallowly developed to keep him hateworthy and worthless in our eyes. Do that for long enough and the viewer begins to wonder why and how he and Allison ended up together in the first place, and why on Earth anyone would put up with this loser for 10 years of marriage.

Having said that, there's a fertile possibility of a better show hiding within "Kevin Can F**k Himself," built on the inscrutable relationship between Allison and her nextdoor neighbor Patty O'Connor (Mary Hollis Inboden).

The last few episodes made me revisit an earlier piece I wrote about their strange relationship. At the season's start Patty expressed nothing but disdain toward Allison, preferring to demonstrate loyalty to Kevin and her brother Neil (Alex Bonifer).

Now they're something else to each other. Friends doesn't quite cover it. Comrades? Maybe. Point is, who they are to one another is still taking shape. Patty has only recently had some epiphanies about her sexuality, who she is and what she wants. Allison has arrived at the realization that every choice she's made in his life is some version of settling, and that also applies to her desperate, hungry fling with her high school crush Sam (Raymond Lee). And she needs Patty . . . although that feeling isn't necessarily reciprocal.

None of this necessarily means Allison and Patty have grown into friends, or surrogate sisters or, as some have implied, that Patty is falling for Allison . . . although it certainly appears that a part of her has fundamentally softened, while Allison's heart has callused over. There's a scene when Allison finally admits she's adrift and she doesn't know what she wants; she's curled up in a bathtub with a blurry racoon's mask of mascara around her eyes as she cradles a wine bottle. The Patty we started with would have kicked her like the downed prey that she is. Instead she reacts with gentle empathy, almost admiration, for her neighbor's extreme vulnerability.

"If this is you broken," Patty says, "stay broken."

Building a show around this strange push and pull between a couple of women who throw in their lot together and can't quite figure each other out, now that's fascinating. But maybe that's been the secret bait and switch all along with "Kevin Can F**k Himself" – the better show isn't about Allison, it's the one about these two enigmatic women.

What about the title? Well, the great thing about "Kevin Can F**k Himself" is that Kevin doesn't matter. He can go missing and the plot wouldn't suffer. If he were to die in the finale, Allison and Patty still have to deal with Neil's stupidity, Sam's mediocrity, and a host of other men they'd be better off without and likely have yet to meet.

"This whole world is designed for guys like Kevin," Allison fumes in the finale. "This whole game is rigged. Fixed." Truth. But one consolation is that whatever it is she's brewing with Patty, whether it be partnership or deceit, is a show I'd watch in a subsequent season.

The season finale of "Kevin Can F**k Himself" airs Sunday at 9 p.m. on AMC. All eight episodes of Season 1 are streaming on AMC+.